This experiment (started on 11th Feb 2018) is like the experiment described in the log entry ‘Third Attempt’ dated 4th Jan 2018. There are a few differences. I haven’t used any moss this time. The moss introduced unintended seeds into the third attempt. Also, after planting the carrot seeds and watering with 12ml water, I put the bottle outside for 1 hour to vent off the initial carbon dioxide release that I believe happens when water is put onto dry soil. After 1 hour I brought the bottle back indoors and quickly connected the CO2 sensor. The graph below shows the result:

The CO2 sensor reading drops initially because the sensor had previously been measuring the indoor CO2 level, which is usually slightly above 1000 ppm when I’m in the room. The minimum reading was 420ppm, which is consistent with what I expect the outdoor CO2 level to be, given that the sensor was attached to the bottle within about twenty seconds of bringing it indoors. The CO2 level rose rapidly at first, then the increase levelled off to a rate of about 500ppm every six hours. I disconnected to CO2 sensor in the morning, and quickly put the bottle lid back on so that not too much CO2 diffused out.

By the time the seedlings start to appear and start photosynthesising, it seems that the CO2 level will be between 10000 and 20000 ppm - this may be too high.

I have LEDs attached to the bottle, as shown in the photo below, so that I can provide enough light for the seedlings once they start to grow, by which time the control circuit will be soldered onto stripboard. The bottle has some reflective aluminium foil wrapped around part of it to reflect some of the light that would otherwise escape.

The carrot seeds have now germinated (first noticed yesterday, 8 days after planting). One thing I’ll be watching out for here is whether the seedlings retain the seed case for a long time. I observed this for all seeds that sprouted in the previous experiments, and wonder whether it is in any way related to germinating in a high CO2 environment.

The seedlings are still growing, all 5 have germinated (2 inadvertently planted next to each other, one planted near the edge of the container). The photo below shows the seedlings under the purplish light that results from having four red LEDs and one blue: 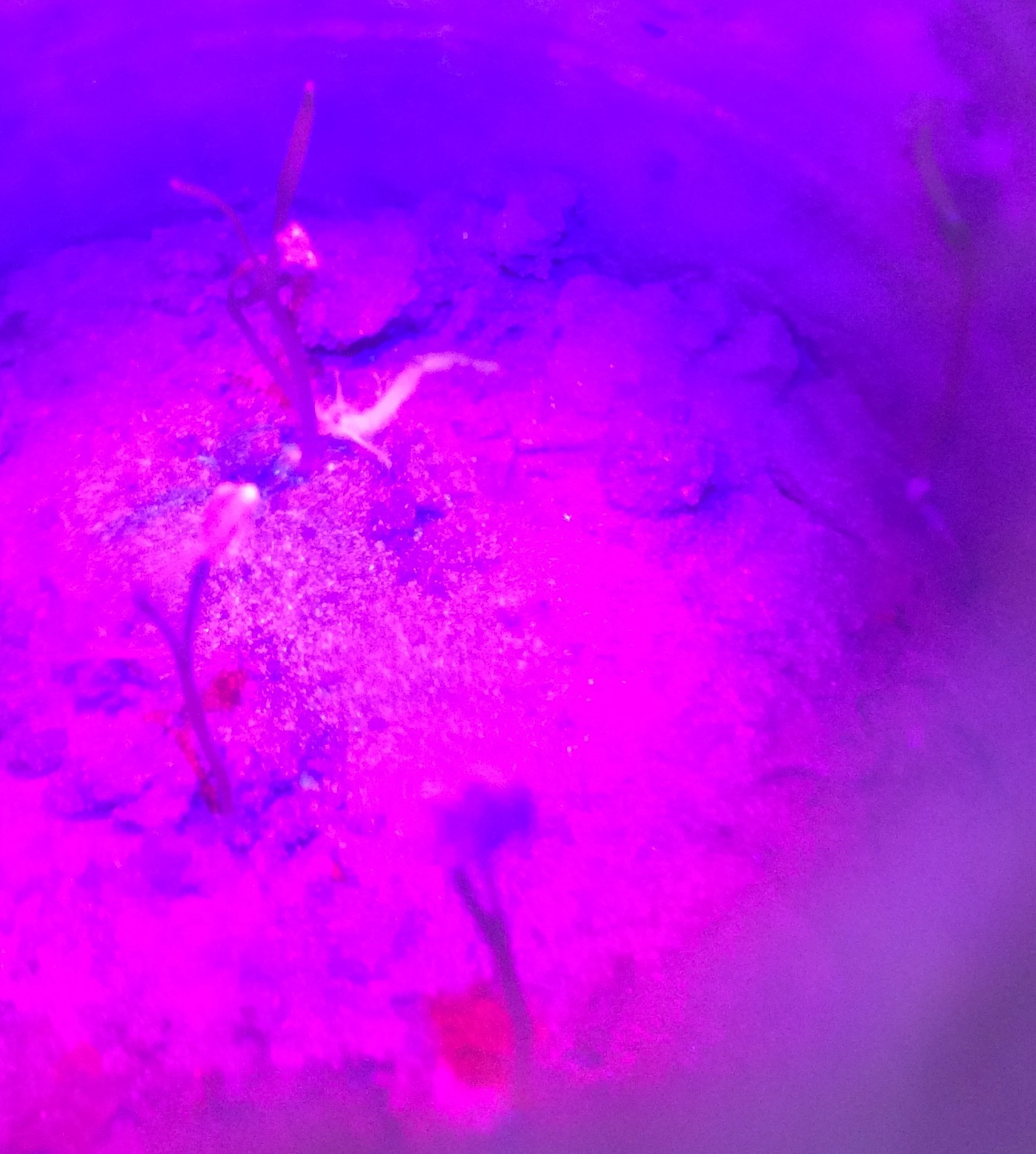 Two of the seedlings died after a mouldy growth grew on them. Of the remaining three, one is near the edge of the bottle and doesn’t receive much light, one Has the seed holding the seed leaves closed, but the third now has its first true leaf (first noticed yesterday, 27 days after planting): 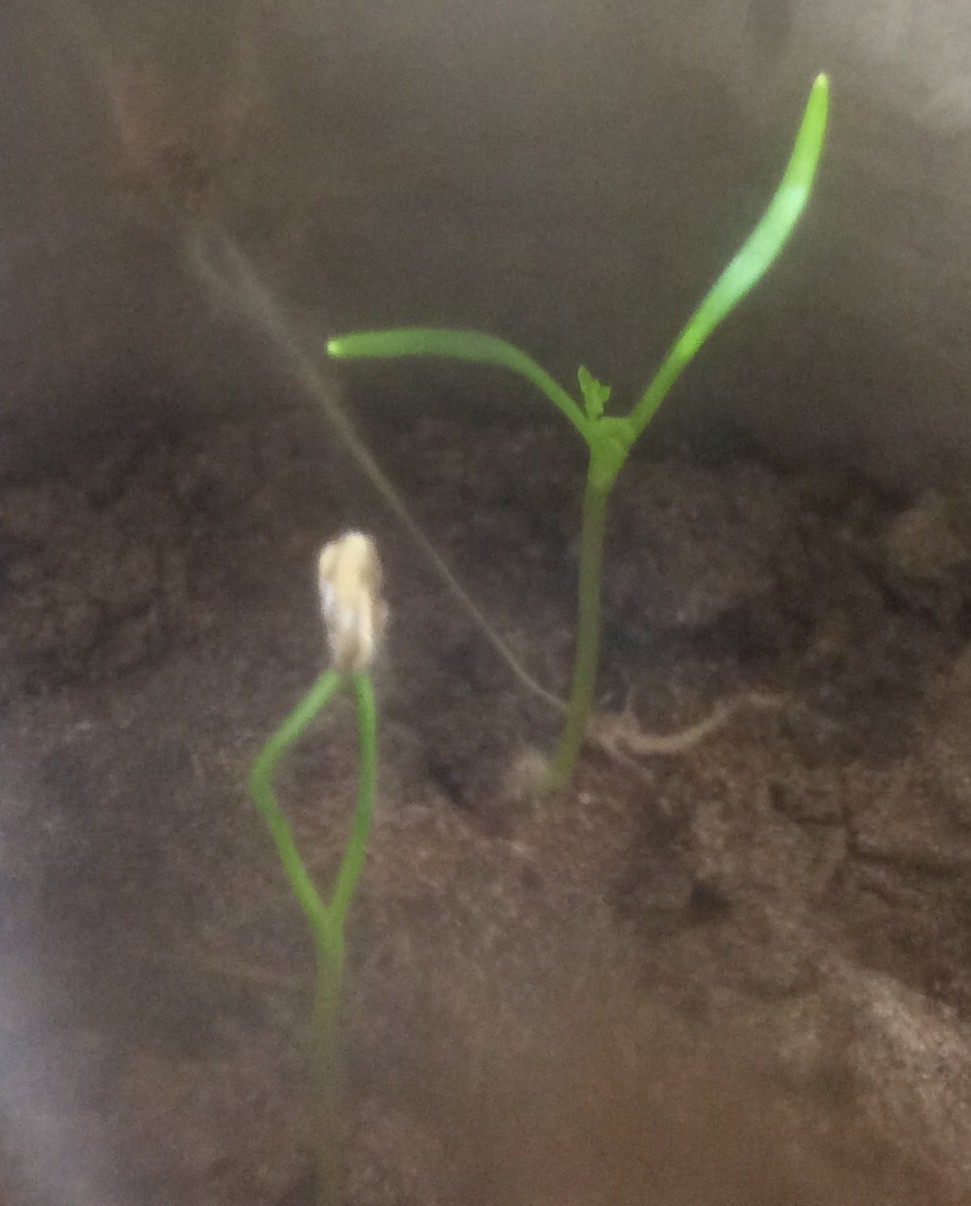 Yesterday I noticed that the seedling with the true leaf began to lean over to one side, and today all three remaining seedlings had fallen over completely.

My current belief is that this is due to the CO2 level reaching some threshold above which the seedlings rapidly die. I attached the CO2 sensor to the bottle and it read off scale (over 10000ppm), but I’m not sure exactly how high it was.

Out of curiousity I’ve left the lid off the bottle so see whether the seedlings are beyond the point of recovery.

Measuring CO2 loss from a bottle when the lid is removed