Part of HydroPWNics is building a Nutrient Film Technique grow system, this post is mostly about the various parts I made for the NFT grow system I've been working on for the project. Also if you wish to build your own version of this cheap NFT setup I made a separate project page and will be adding pictorial instruction to it to help folks build their own! The other page wont be getting project logs and updates like this one, its mostly to cut down on clutter and be a standalone guide. Project page yo build your own NFT: https://hackaday.io/project/7116-low-cost-nft-hydroponic-garden-under-250

Most of the work in this log pertains to water circulation and management within the NFT grow system. As mentioned before and pictured the NFT grow system is constructed from PVC fneceposts and PVC pipe. The fence posts hold the netted pots where the plants grow, the PVC pipe is used for piping the water in and out. For this system I build an input manifold from 3/4 inch PVC pipe and PVC ball valves. The purpose of the ball valves is to so the water level inside the fenceposts can be adjusted, when the plants are first starting out the water level has to be high, when their roots grow big enough the water level can be lowered. Eventually I intend to motorize these valves and add sensors to enable closed loop water level tuning. The next piece I worked on was the drainage manifold, it consists of 1 1/4 pipe and a few 1 1/4 inch fittings. The drain manifold is made from larger sized PVC so that the water drains fast enough relative to the circulation pump. In the picture below I show how the drain manifold will go together: 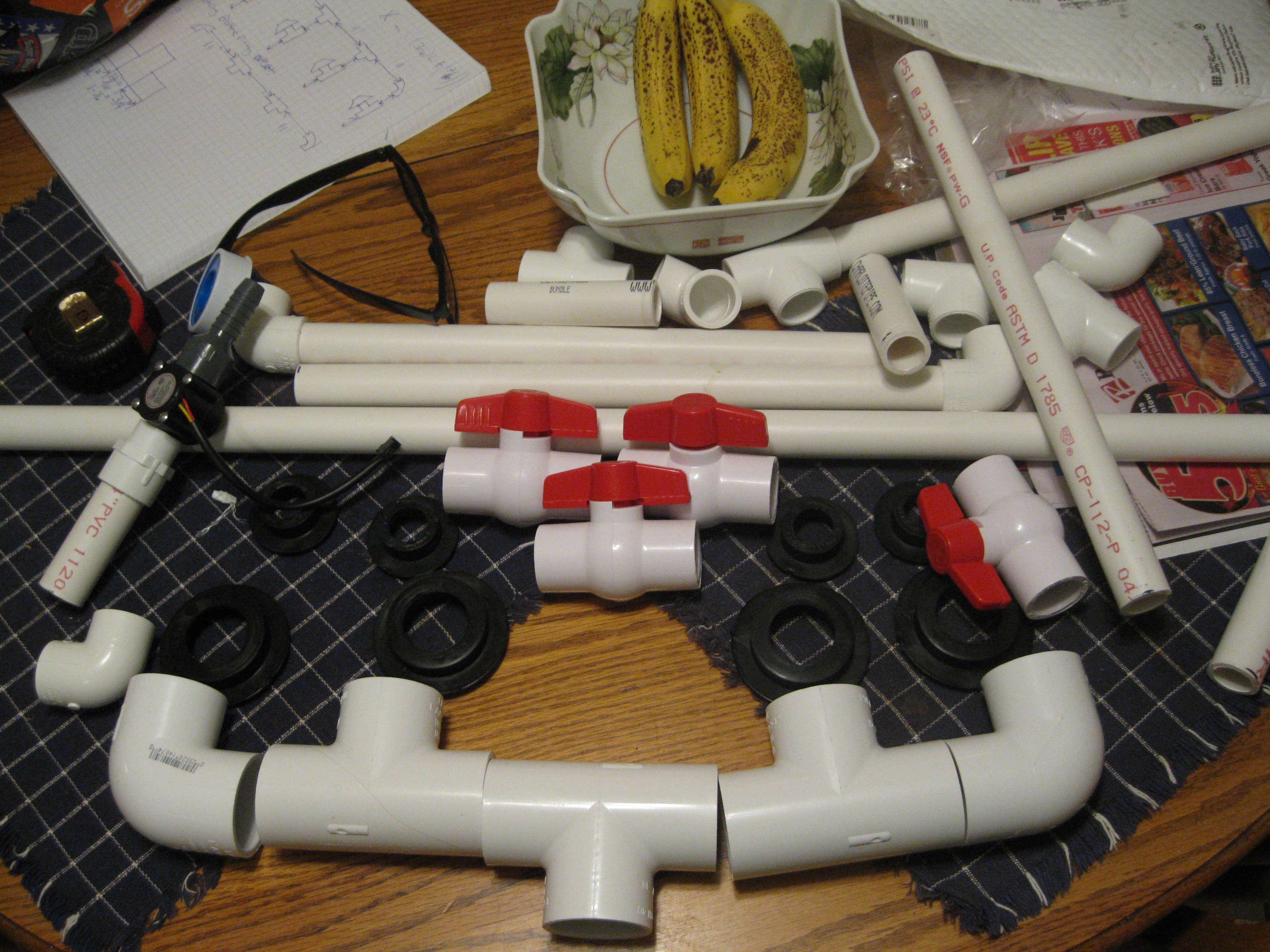 As for attatching the manifolds to the fenceposts I originally was planing on drilling holes in the endcaps and using PVC glue and epoxy to hack it all together. I decieded that would be a rather terrible way to put it together so I did some research on what other folks are doing with similar builds and someone recommended uniseal gaskets. They work really well and they are very simple to install, basically you buy a seal based on the size of pipe and they have a hole-saw chart explaining what size hole is required for the seal, just drill the hole pop in the seal and push in the pipe, water proof and you can take it apart for cleaning. Here is where I got them BTW http://www.aussieglobe.com/uniseal1.htm

The input manifold pictured not yet finished, next pipe needs to be cut to join the two sides with a t fitting in the middle that connects to the circulation pump in the reservoir. Also in the picture the two halves are different sized, I was still deciding on the exact spacing I wanted. I should also note that I primed and painted the wood frame to that nice planty looking green color, I think it turned out great and gives the rig a nice look, the plan is to build another rig but paint it a different color. Its really just for fun. 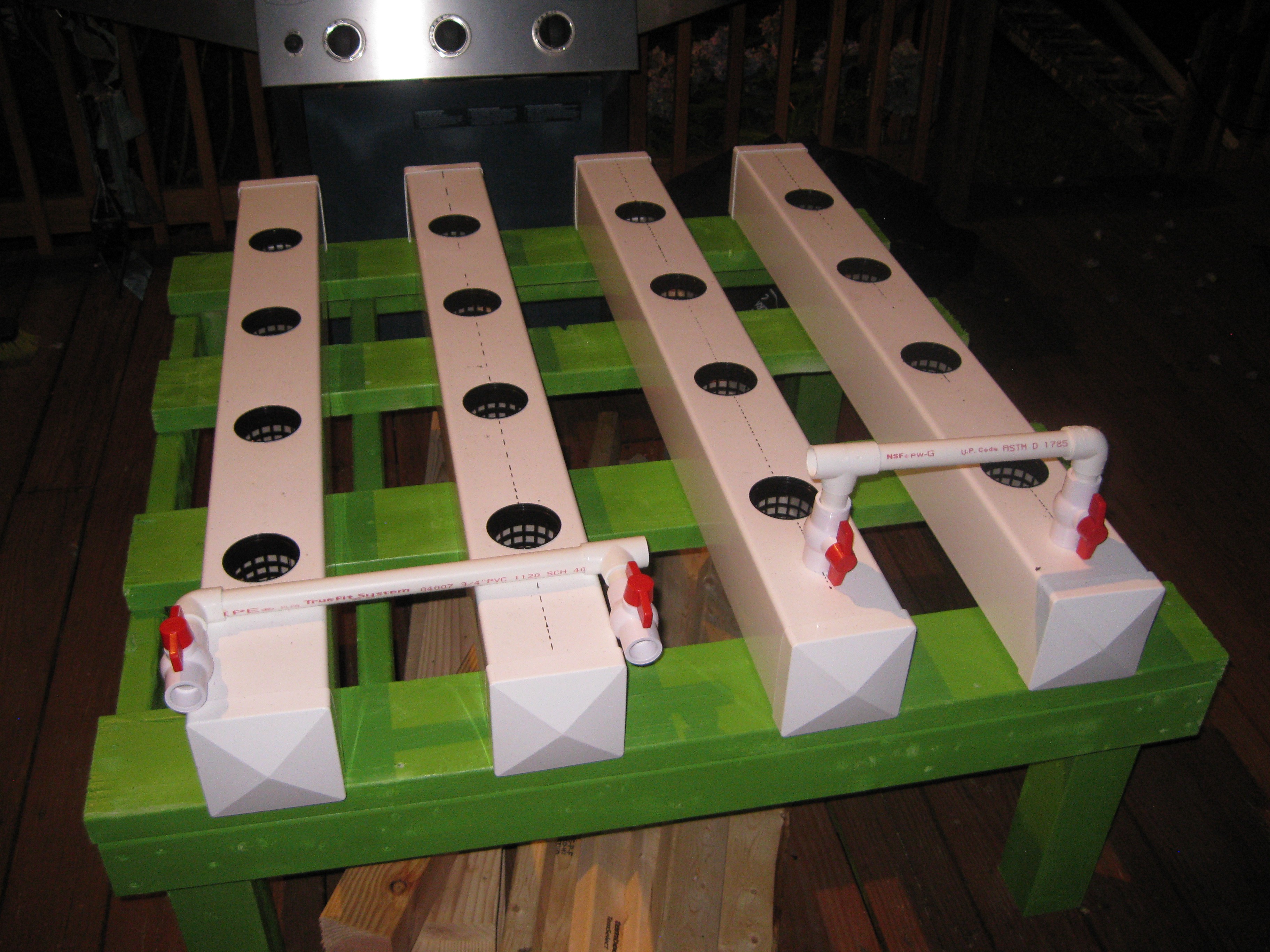 In addtion to the manifolds I finally found a reservoir for the system. I was planning on a 55 gallon water barrel originally but that would be too much water and require a bigger more expensive pump, I also decided to build the green two by four stand shorter in case plants get way too tall. The next idea for a reservoir was a storage container, at first I was going to go with a 10 gallon container but ultimately decided to get a 16 Gallon container because the dimensions allowed for a better fit underneath the grow system itself. Inside the reservoir is s submersible pump used for circulating the water through the NFT system, connected directly to the input manifold. Also in the reservoir are aquarium airstones connected to an aquarium air pump , this serves to aerate the water/nutrient-solution and agitate it to prevent stagnation/algea growth. 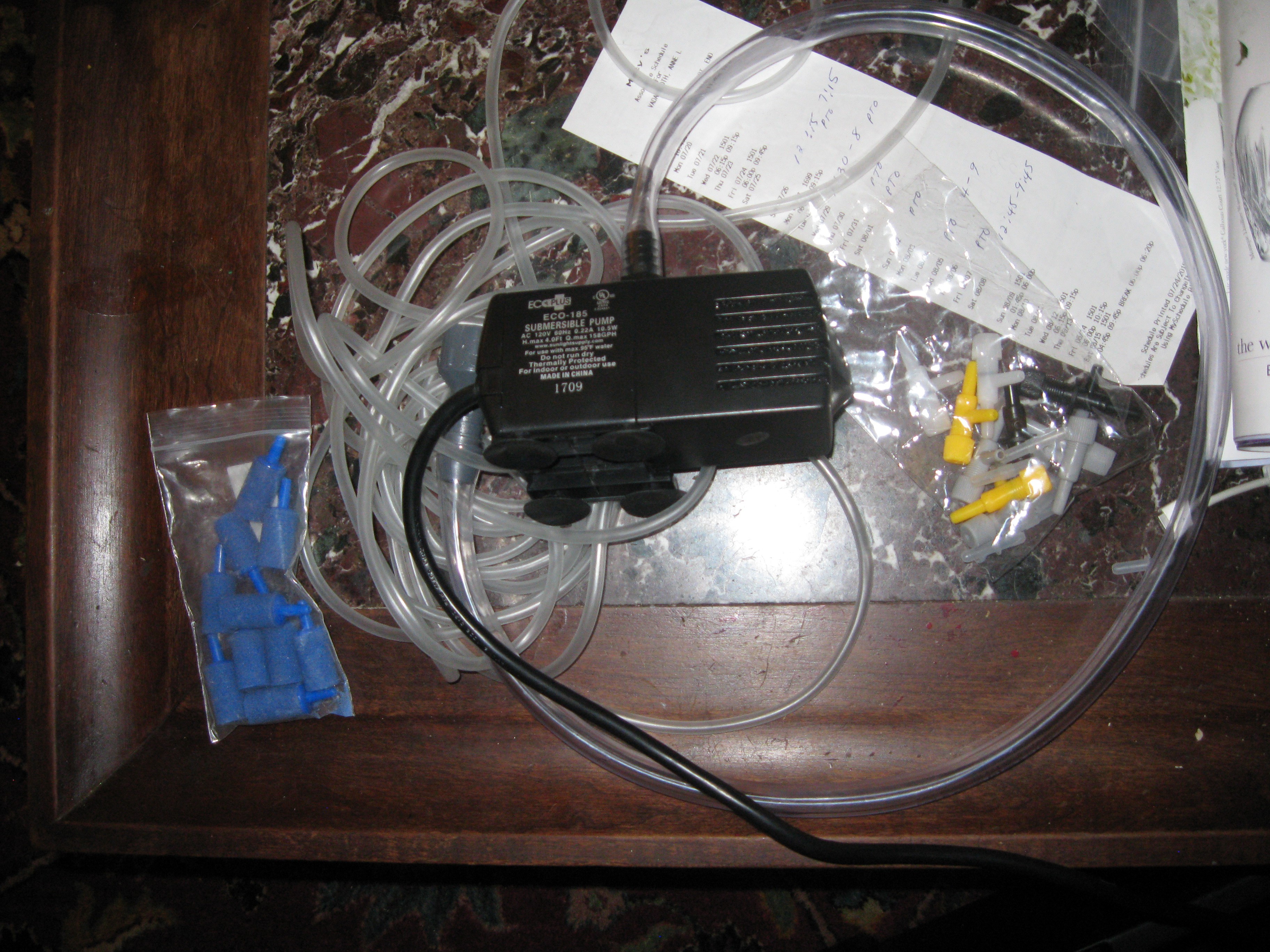 16 Gallon storage container, AKA the reservoir! 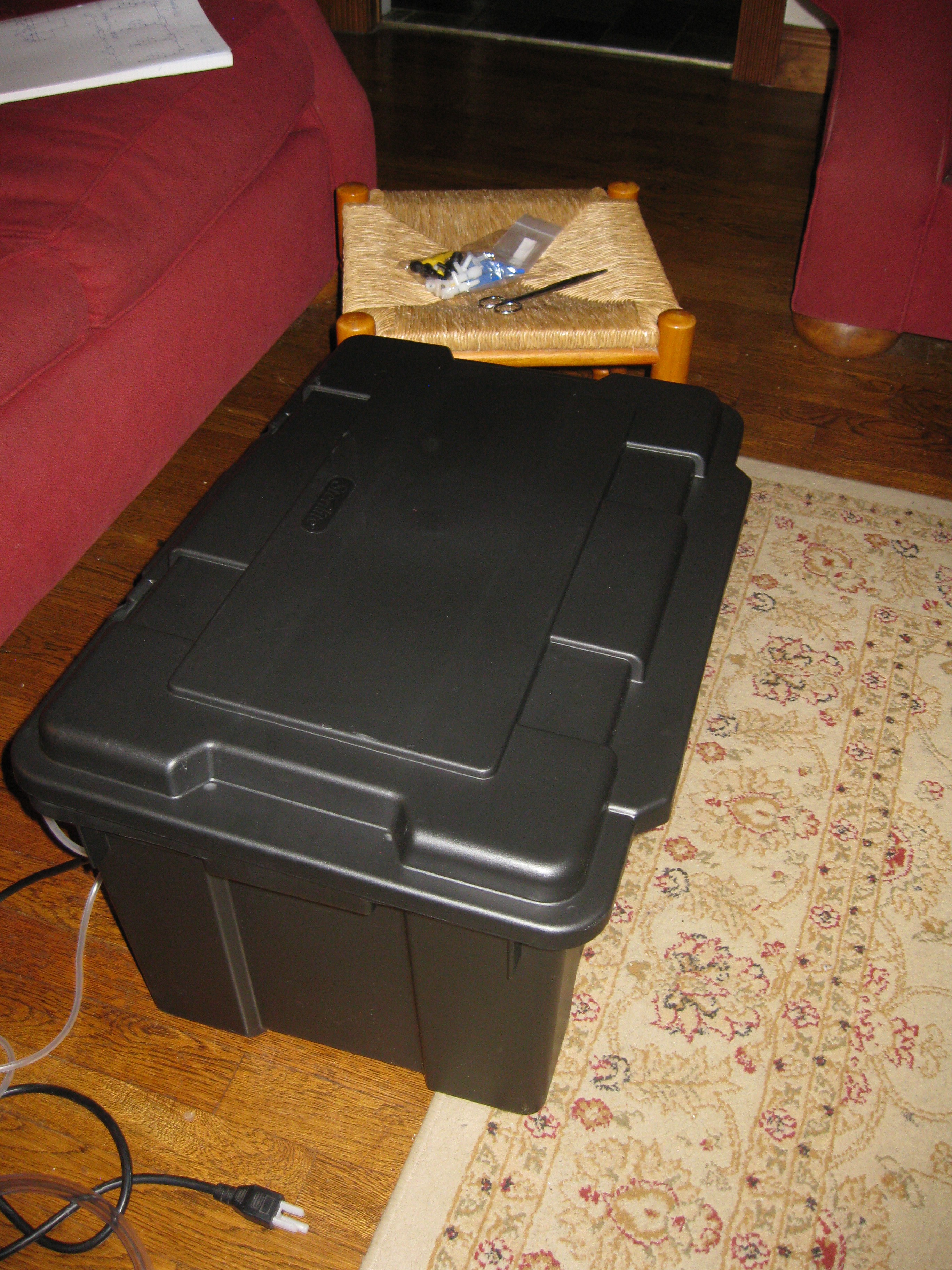 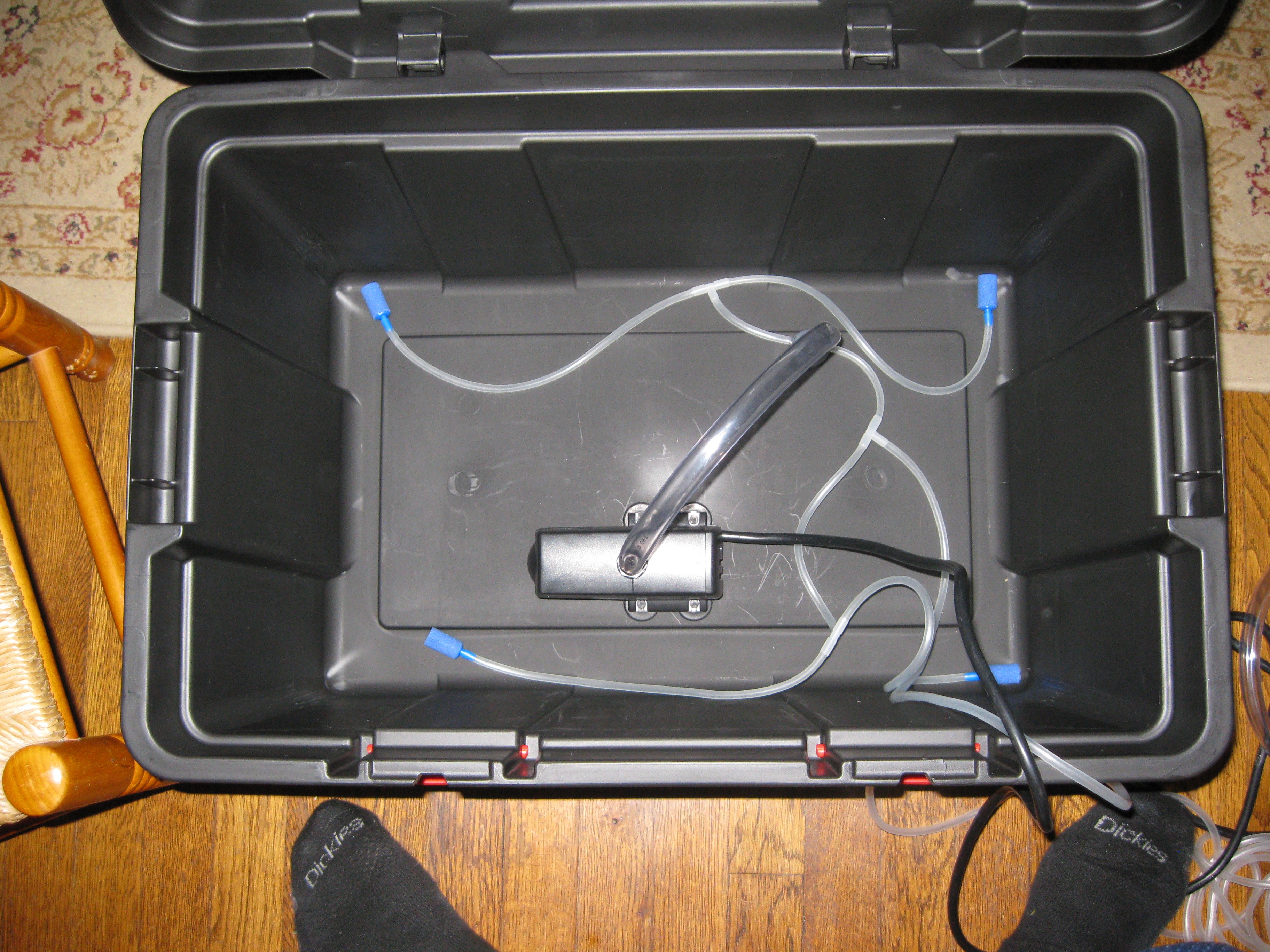 How all this works: 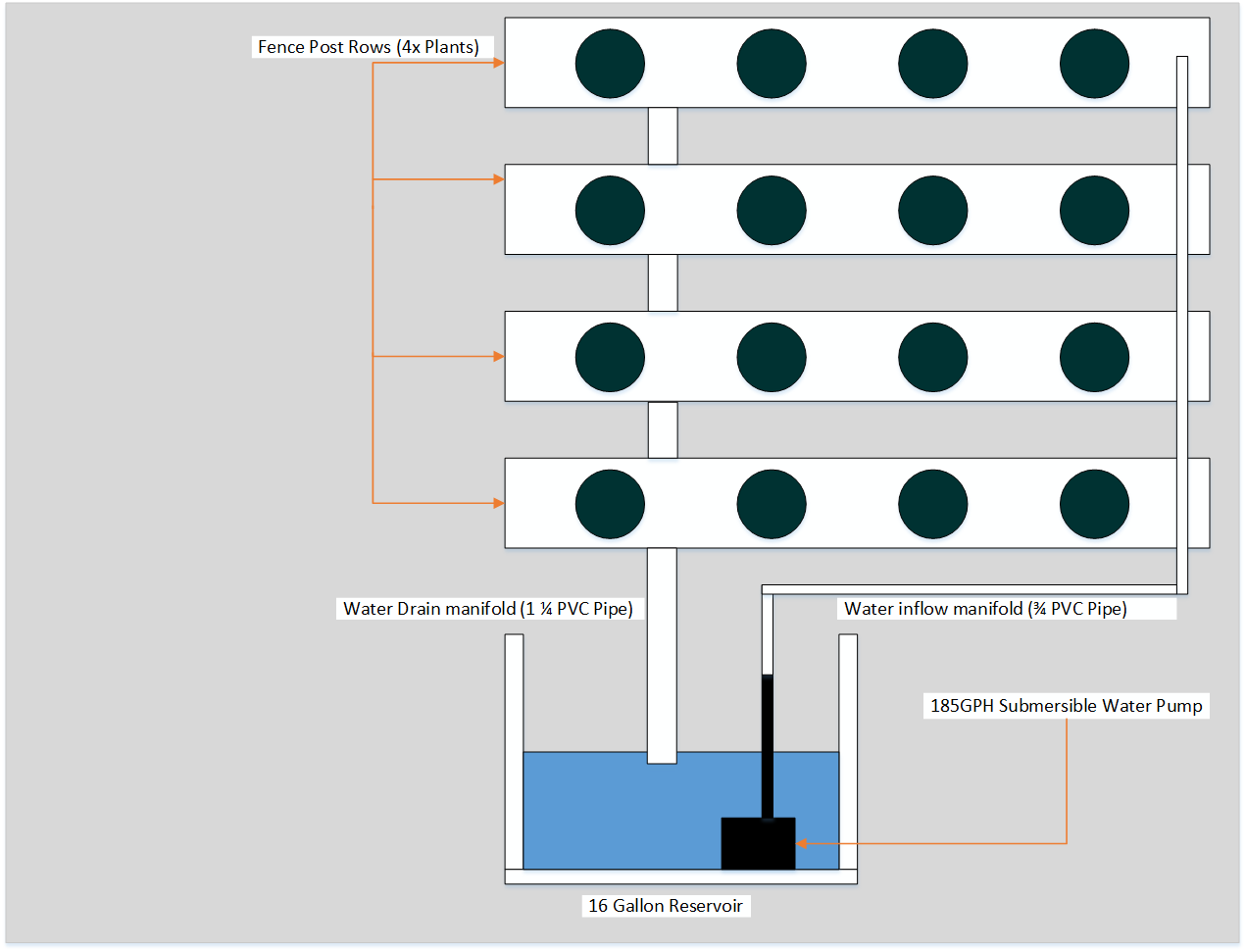 The diagram above should explain the general idea behind everything discussed in this log update. The pump sits in the reservoir and pumps water into the fenceposts via the input manifold, the water drains after flowing from the fenceposts into the drain manifold and back into the reservoir. Stay tuned for more!
Previous Log