So quite a bit more got done on HydroPWNics since the last update. I did a lot of work on the AC control box discussed in the details section and system design document. Quick refresh: the AC control box is design to control all the AC powered components in the NFT grow system, its based on a DyIO solidstate relays, and two allegro current sensor eval boards. All the circuitry and DyIO will be housed in a PVC electrical box. The box also has connections for water flow and level sensors, since the pump is controlled off AC. The diagram below taken from the details section further explains the internals of the AC control box: 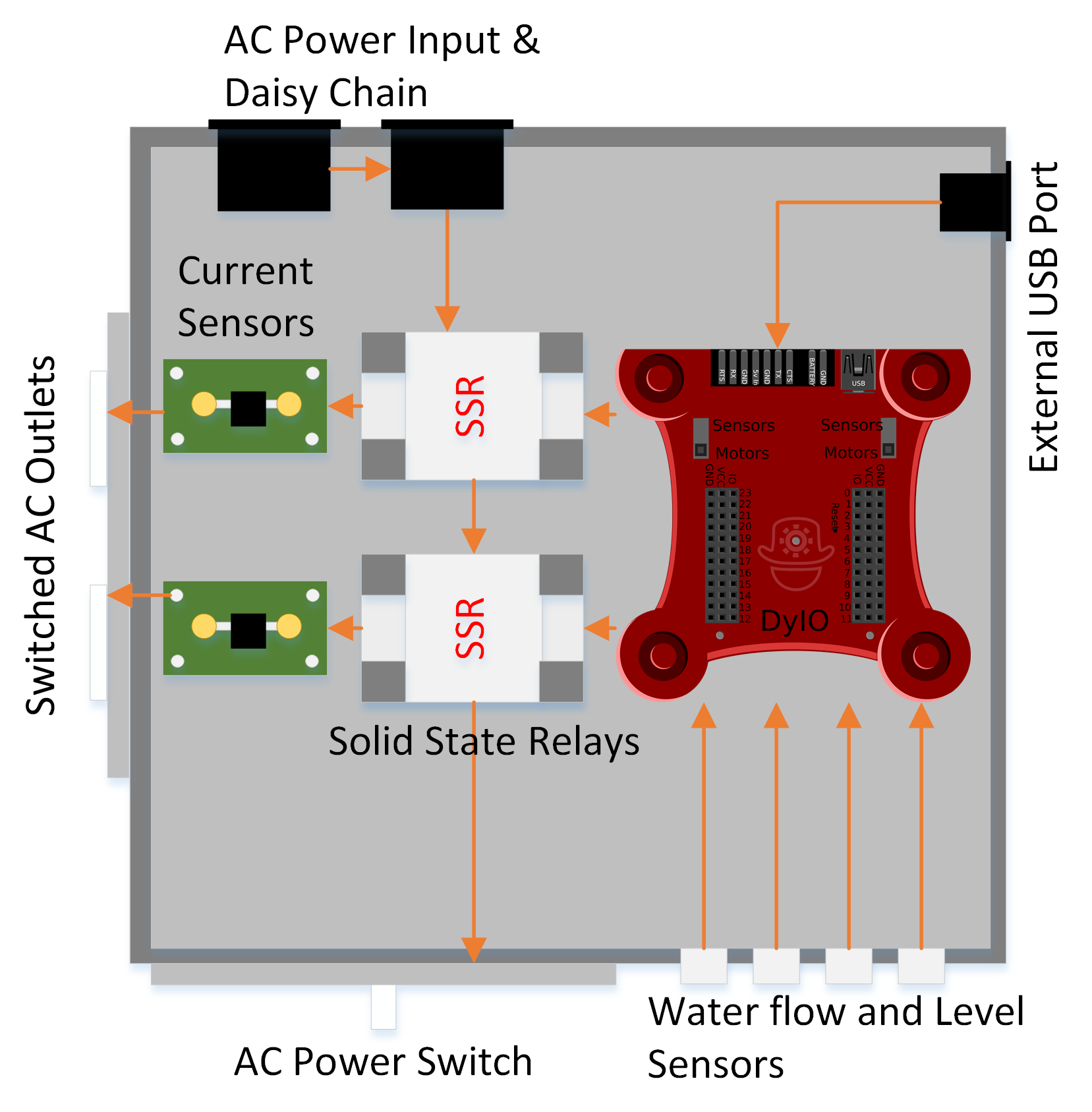 In the Java application the AC control box is represented by a java class/object, called AC_ControlBox . This class is rather simple, it only contains functions for controlling the relays and reading the current sensors. Right now the class is very simple only setup for manual control of the AC devices from the main application. Later timers, sensor input, and additional intelligent control will be implemented. The idea is to implement the most basic function and debug the hardware along the way, confirming features as functioning one at a time, this is to ease the debugging process as the whole codebase grows.

Also since last update I made quite a bit of progress building the AC control box itself. For the box I am using a Cantex electrical box, they can be bought online from a variety of retailers, I forget where I got mine exactly. I started by using a hole saw to drill two holes close together to mount the two socket AC outlet. The outlet is screwed in place with a bezel mounted over it to make it all look nice. Most of the other work on the box was with wiring, making cables and hooking everything together. I also spent some time placing the guts around in the box, I'm not 100% sure how I'm gonna mount it but what I have in the picture is what I'm considering. Soldering connectors to wires for relays 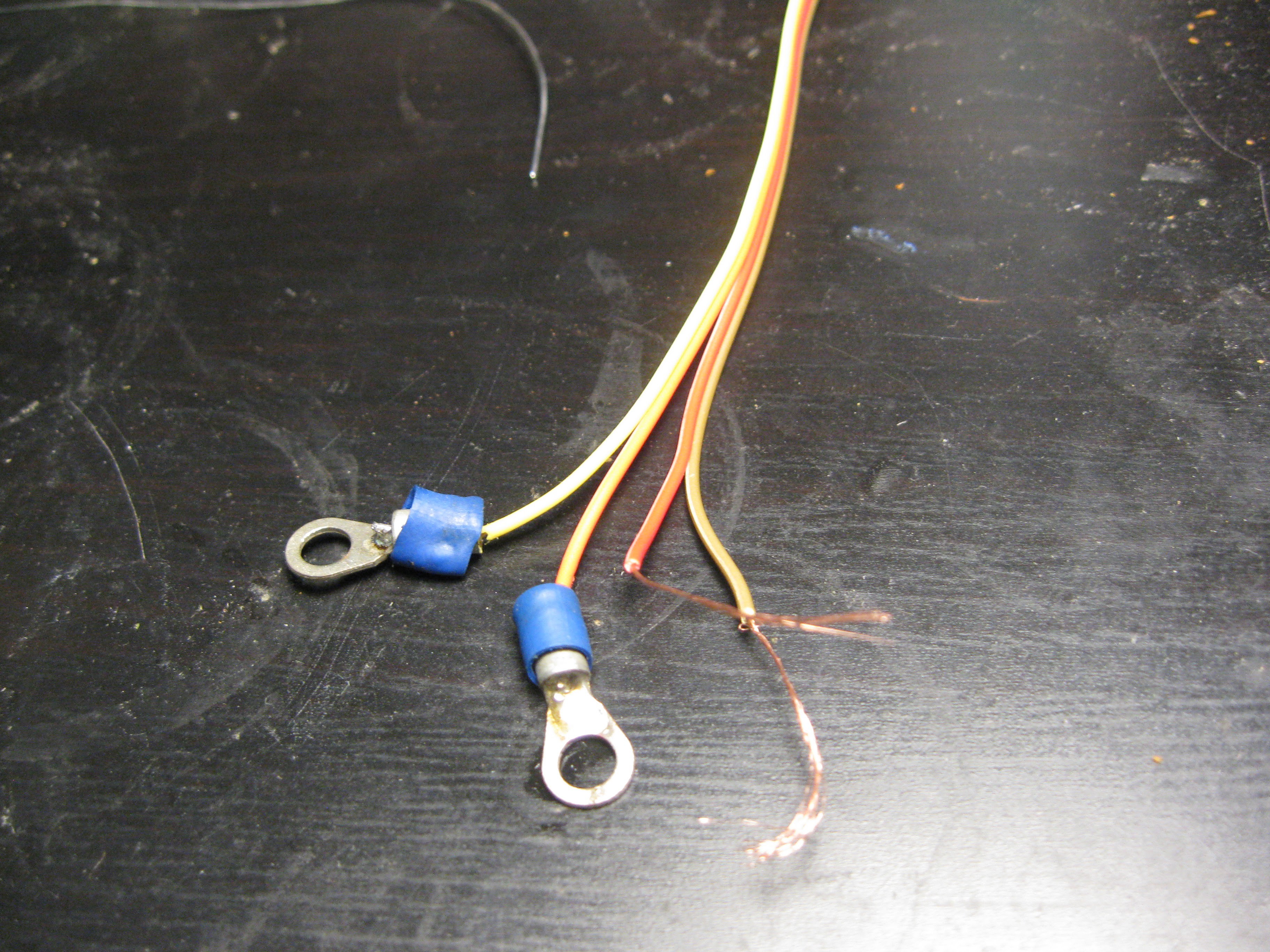 AC control box being laid out, the outlet is installed but I need to measure and drill holes for the rest of the mounting. Also still need to decide whether the electronics will be laid out this way or if I lay them out a different way. 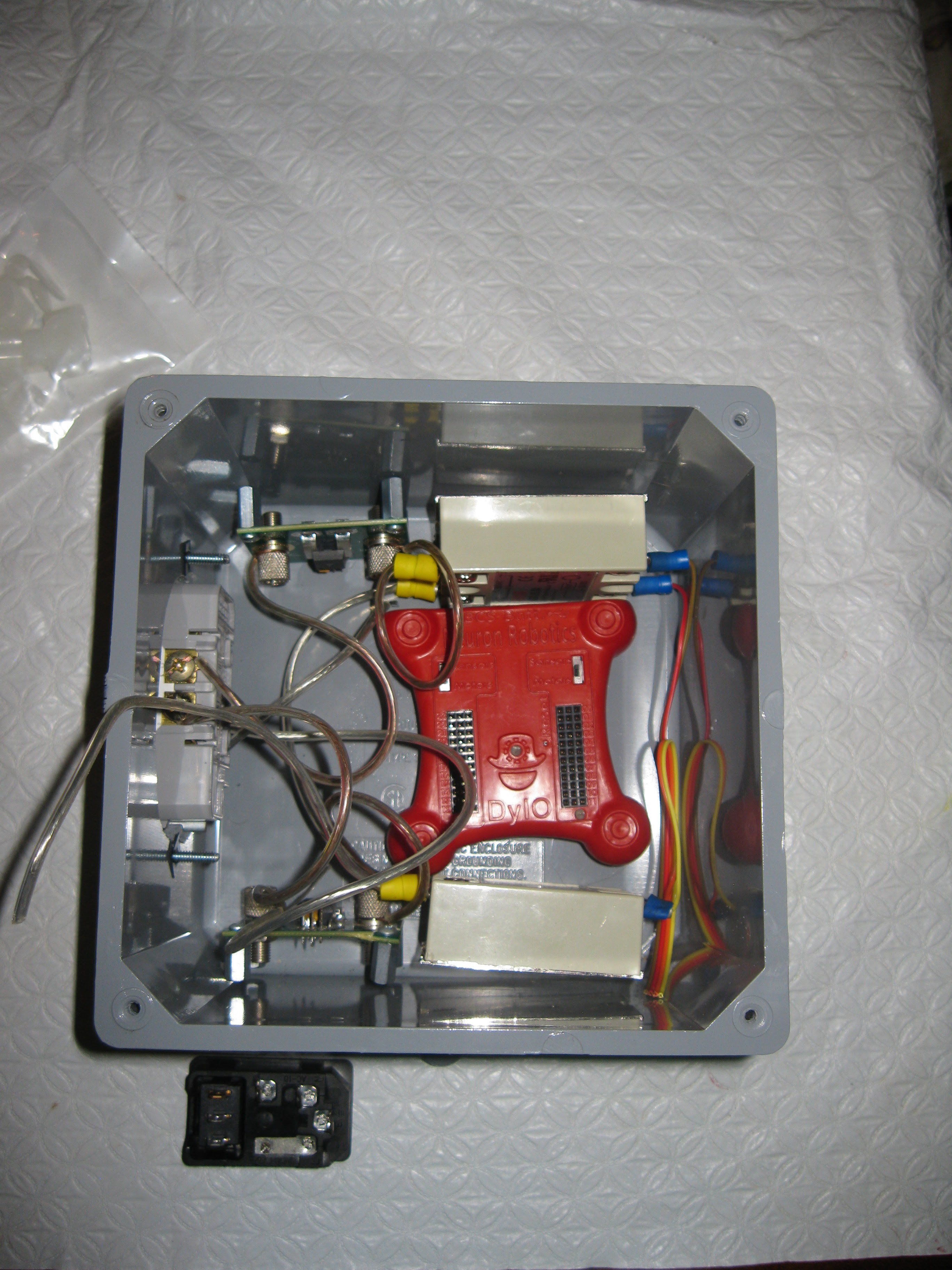 Side view of AC Box showing the two outlets 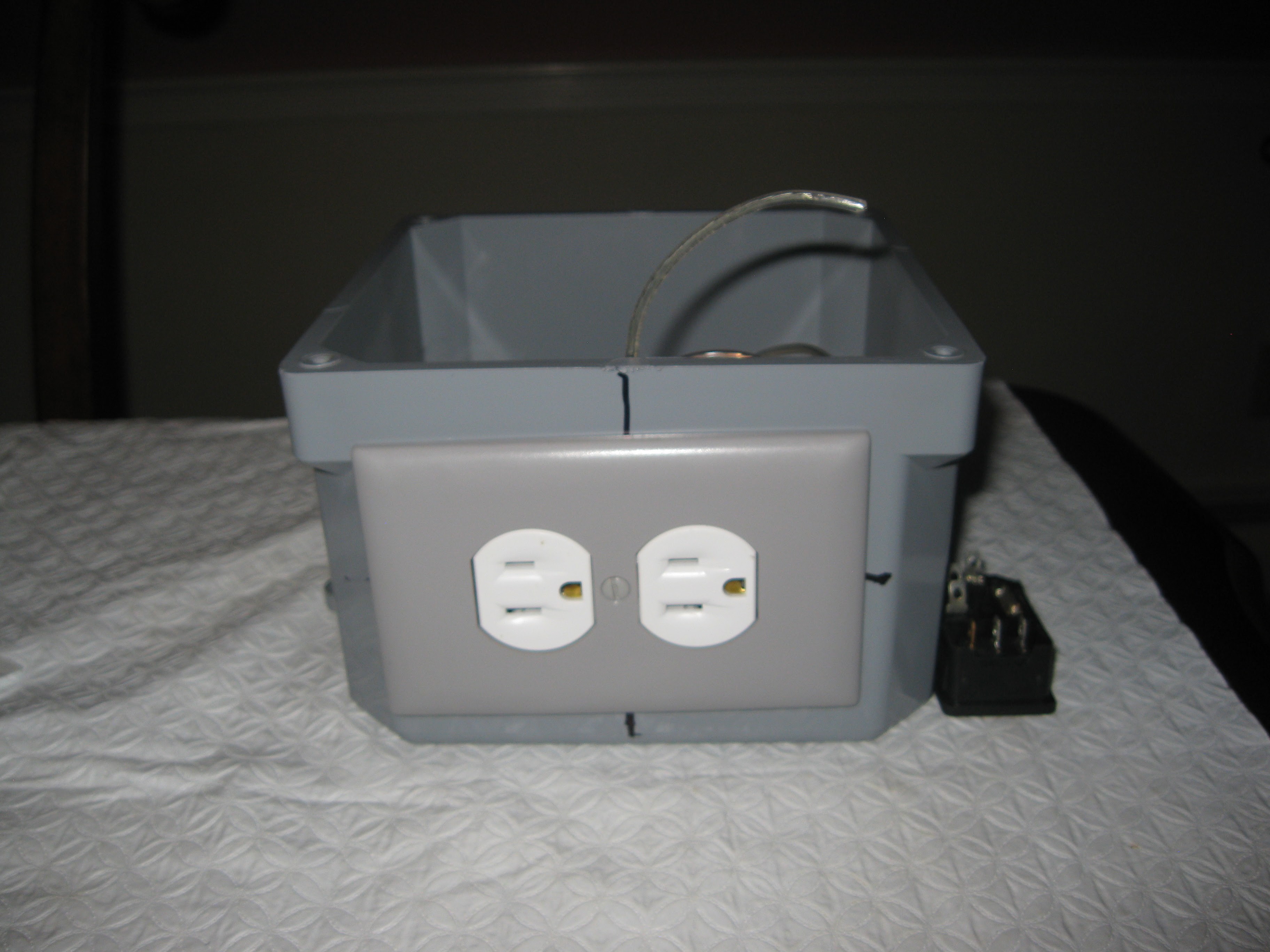 The plants have been doing quite well since the last update on them. The strawberries still haven't done much since I put them in the cloner a month ago so I won't be discussing them much. Moving onto the other plants, all of them have excellent root growth, great leaf color, and accelerated vegative growth. The peppers that just sprouted roots the last time have grow a bit more, I was worried that they weren't doing too well because they shed a lot of leaves but the root growth is up and new leaves are forming! The tomatoes and basil are doing the best, they have a lot of leave growth and significant root growth. The cheap Maxi Gro nutrients are working pretty well, I have high hopes of putting really healthy plants into the NFT when I get it up and running. That was sort of the goal to produce quality plants beforehand so that I can start generating lots of data about how the unit runs and generate lots of plant data for the cloud.

A nice picture of the cloner 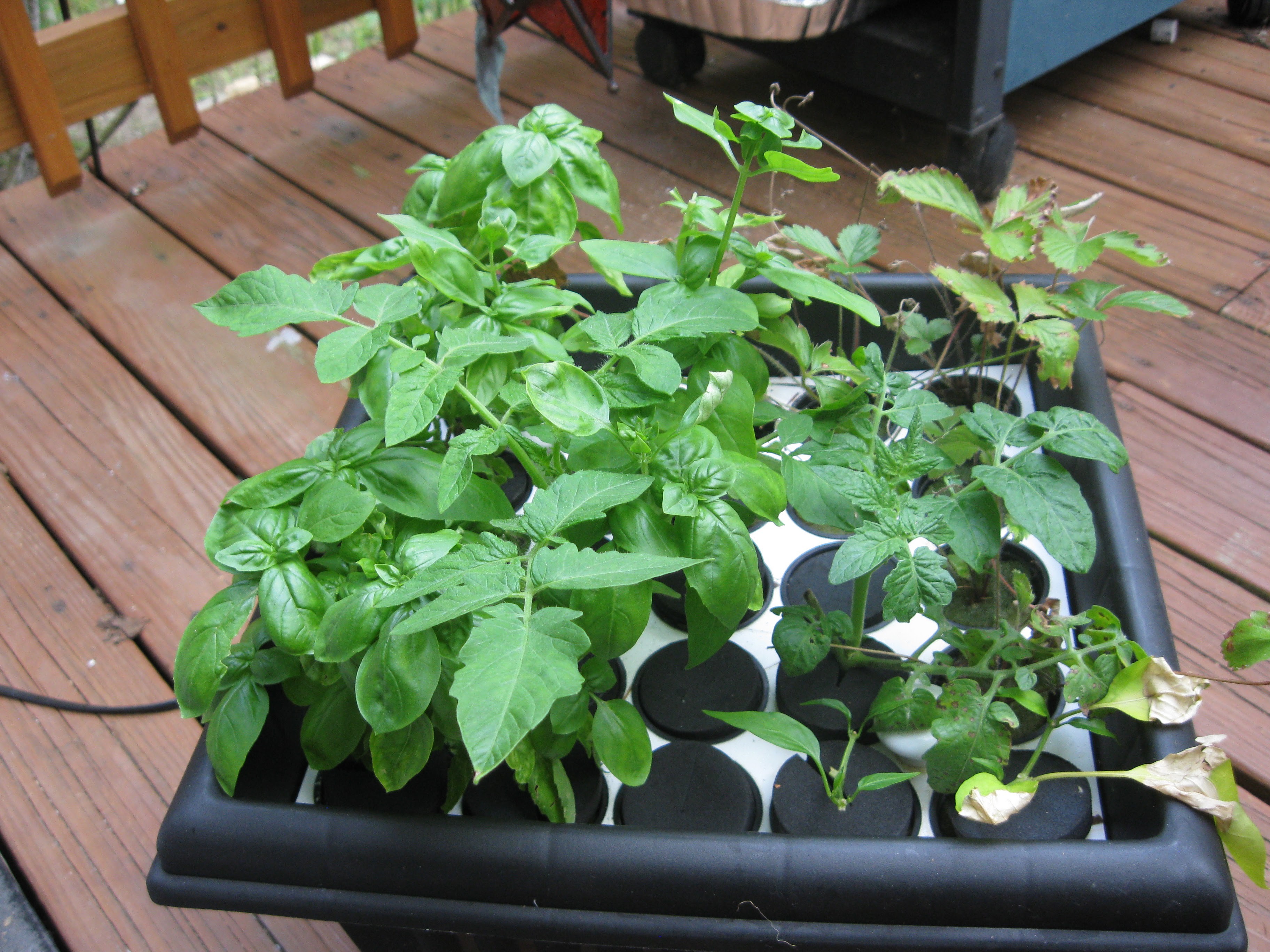 Another shot from another side The other pepper plant 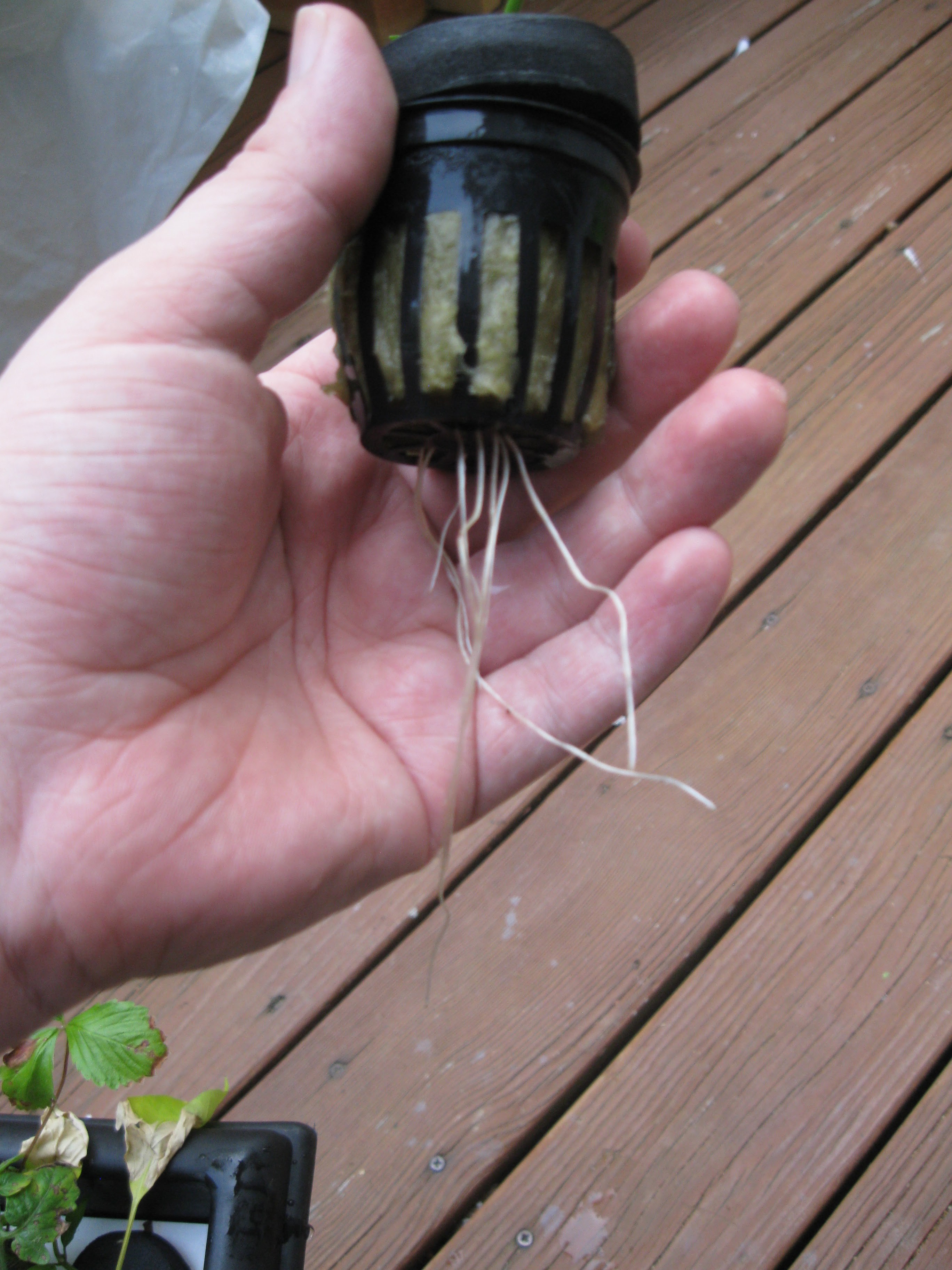 Over this past weekend I bought the gel PVC cement for PVC fence post gluing and glued the endcaps. To glue the endcaps to each section of post, I lined the lip of the cap and the crease where the cap meets the end of the cut post well with glue. After glue was applied to an endcap it was placed onto an end of post. I did each post one at a time gluing both endcaps on. I used a bungee cord to hold each endcap down tightly, I let each one sit for about 2 hours before switching to different post. 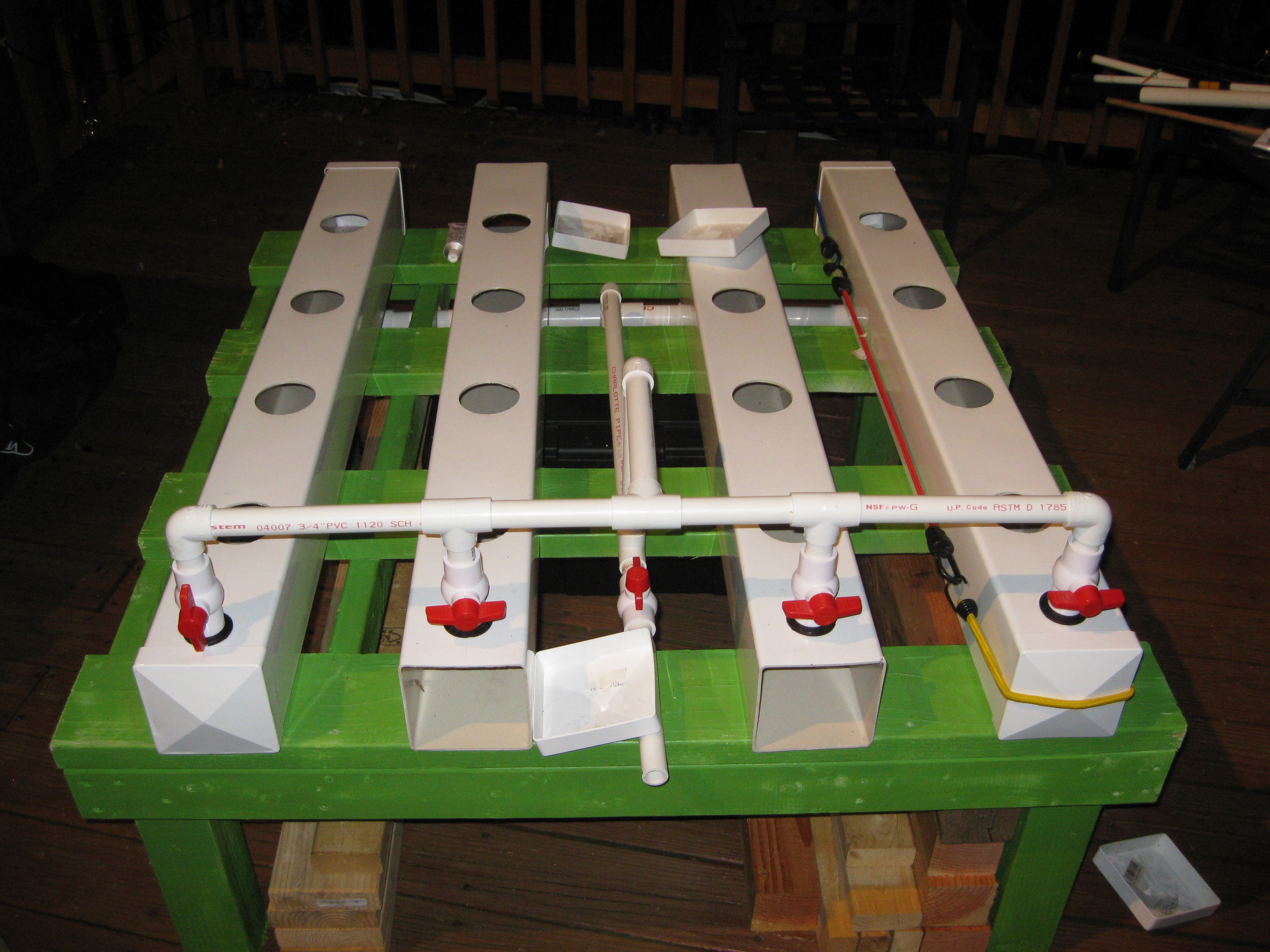 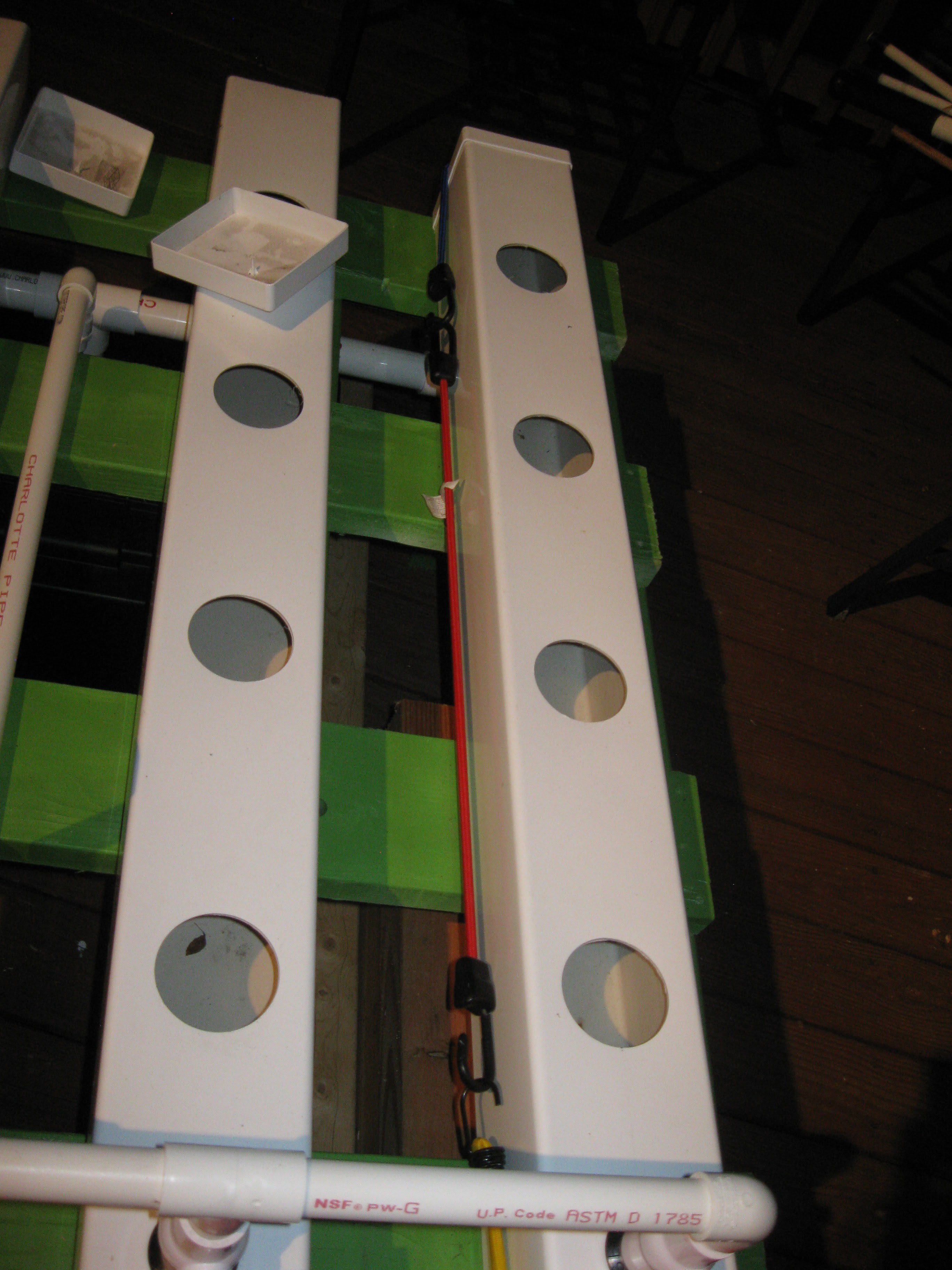 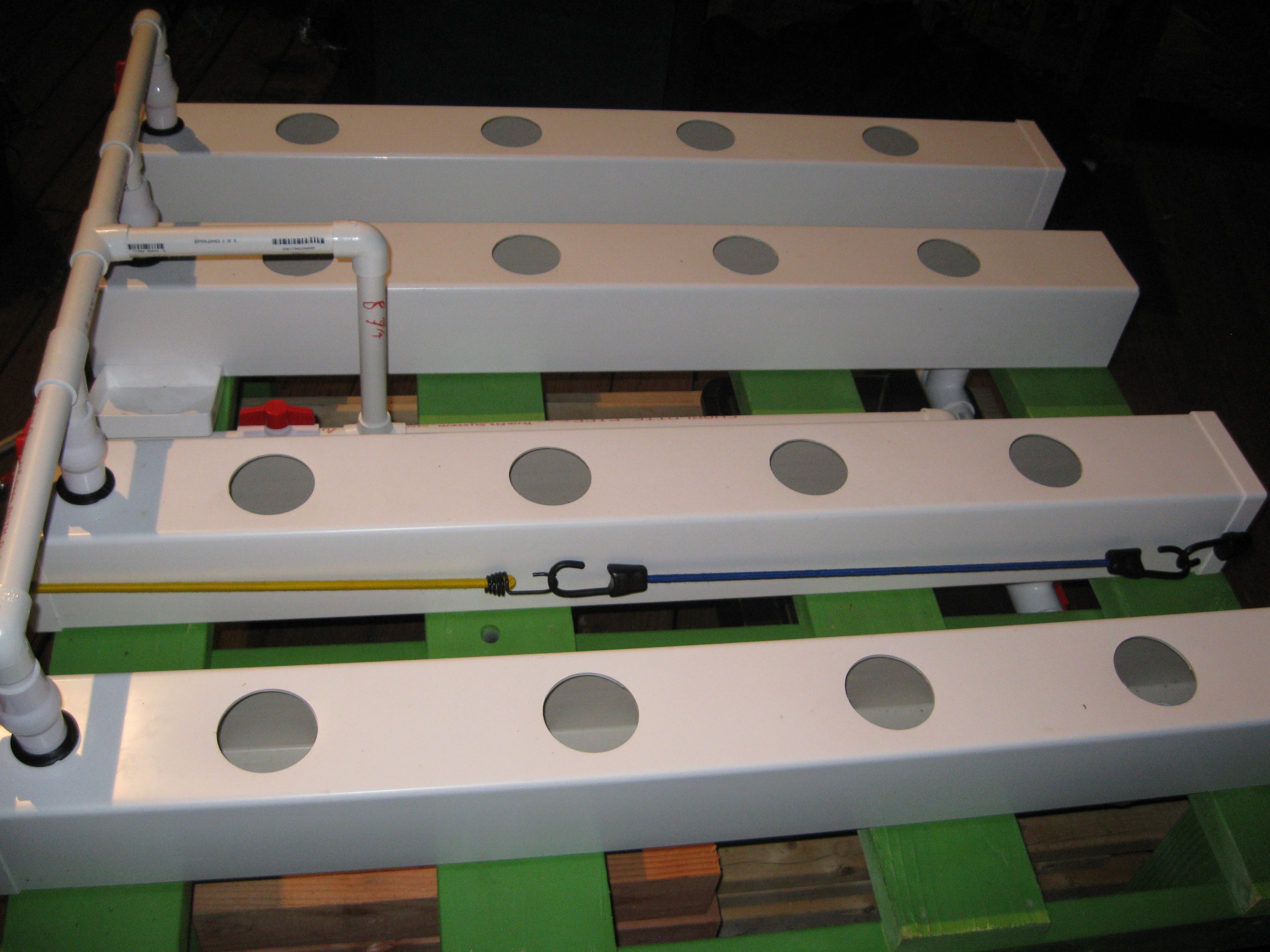 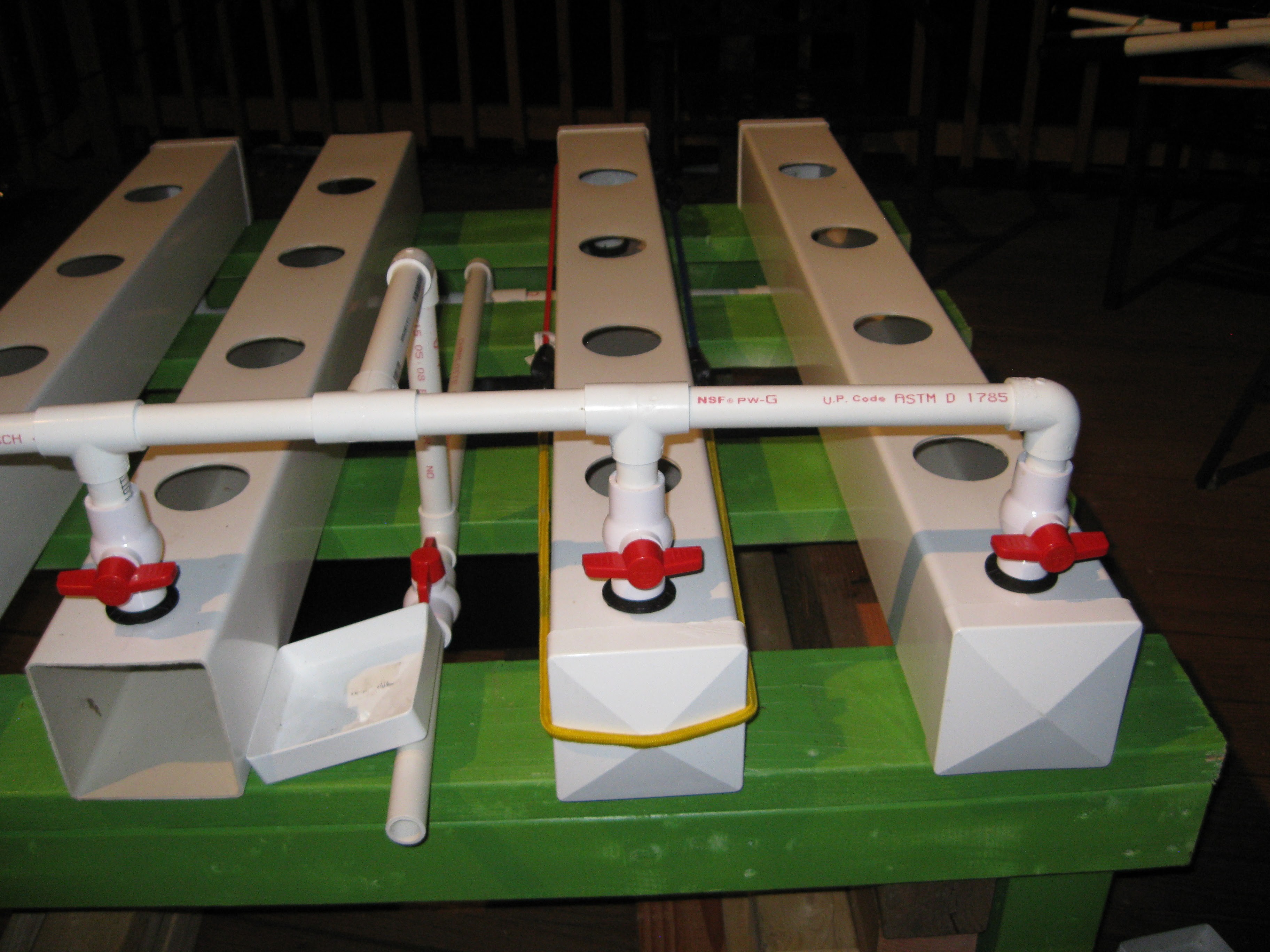 Days after the gluing though I noticed that there was some warping and melting to the endcaps, I am not sure if this is going to cause me any problems yet. I looked inside each post with a flashlight, the seem/crease where the end cap meets the post seems to be complete solid and filled in with dryed cement/PVC goo. Anyways just in case I plan on sealing the caps from the outside with silicon. On the next version I build of this system I think I'm going to attach the endcaps with silicon, this way the seal will be tight, and I can take the assembly apart for easier cleaning. Stay tuned for more updates !!!!!

Semi-Finals: Its Go Time and Much More

Move to the basement and Manifold Gluing