After much trial and tribulation, I finally having a working Bearing Gear that doesn't fall part in my hand. It's still not as strong as ABS, but it's getting closer. I would have posted this yesterday (Friday) but I was exhausted. On Thursday I was on a roll...each print was better than the last and I felt like I knew exactly what I needed to do. Both the printer and I were firing on all cylinders. It was great. So great, that I didn't notice when I had started an 8 hour print at midnight. 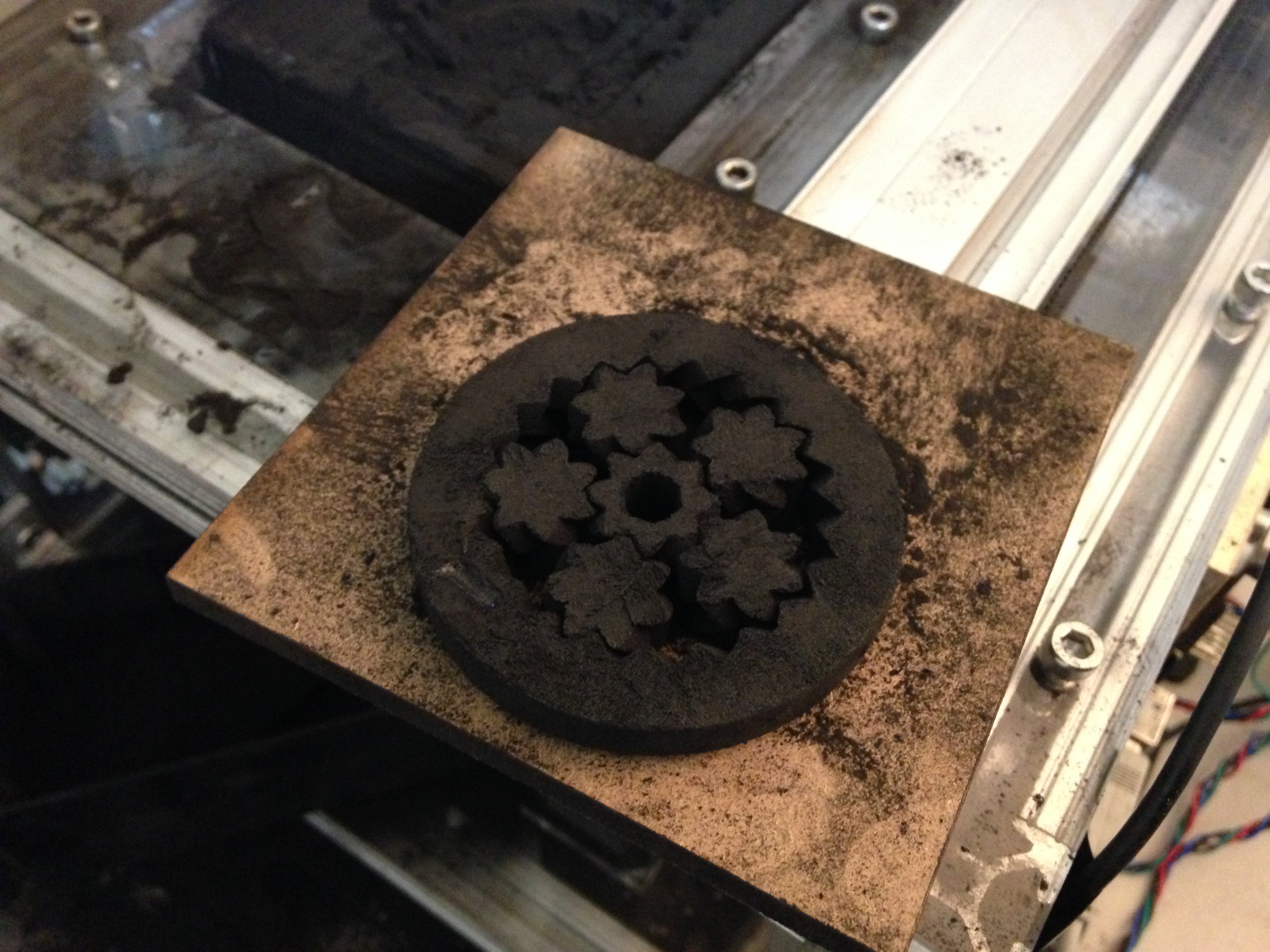 Around 1am I decided that I needed some sleep, and the printer could run by itself. But, did I really want to sleep with a laser burning away? Not really. So I decided to set a 1 hour alarm. I would sleep for 1 hour, wake up, check on the printer, and then go back to sleep for another hour. It sounded like a good idea at the time. Apparently it's very hard to get to sleep when you're worried about your house burning down. Needless to say, I was in rough shape yesterday.

But it was worth it. All but the last few layers were perfect. Although, the Y-axis jammed up at the very end. Some time around 8am I woke up to the sound of stepper motors loudly complaining about something. When I checked on the printer, the y-carriage had jammed itself to one side, the power supply was in current-limiting mode, and the laser was drilling a hole in the powder. I was too tired to think, so I turned it all off and went back to bed.

When I had finally woken up enough to think, I found this... 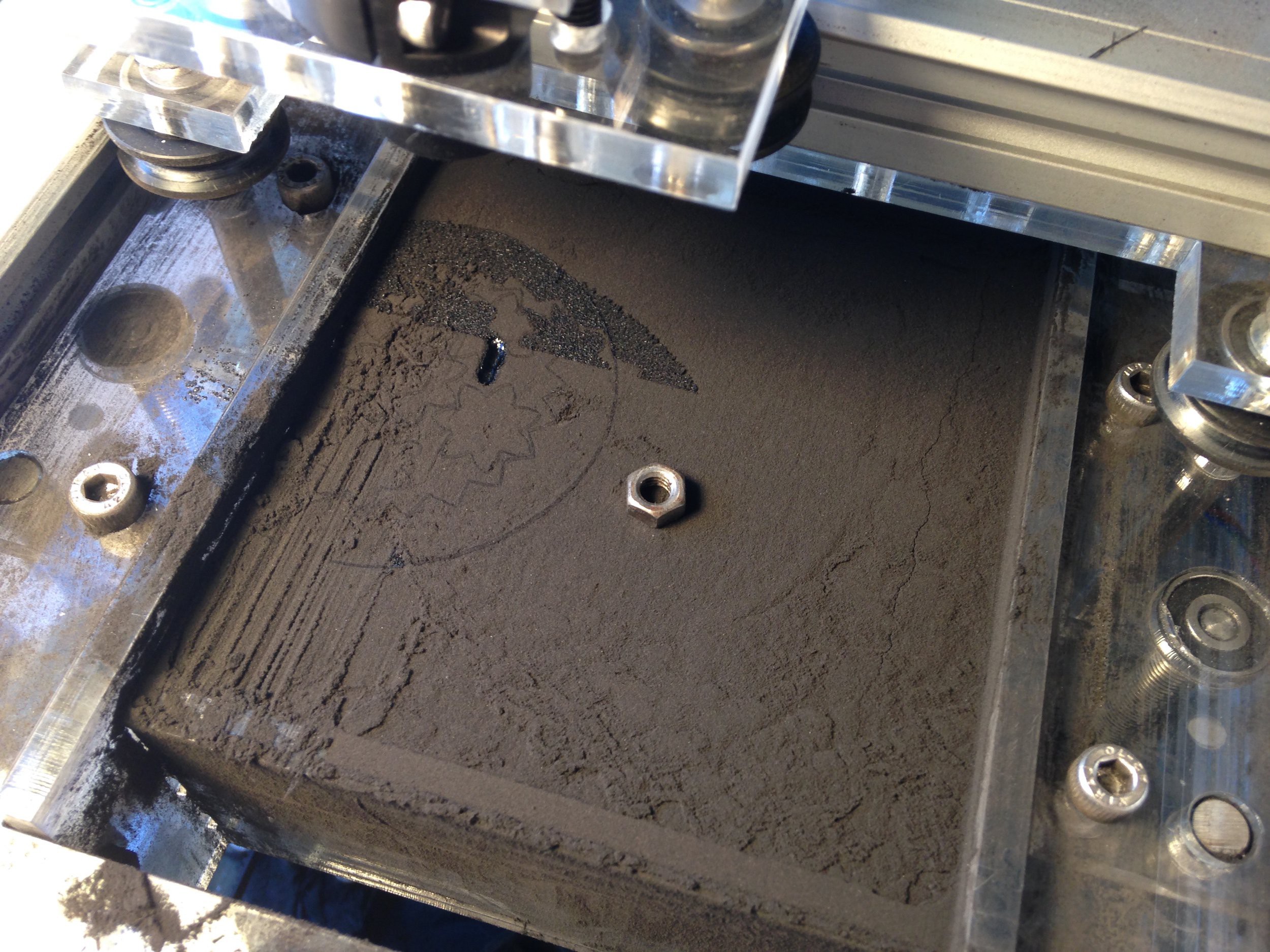 On the one hand, there's a random nut sitting in my powder bed, and that can't be good. On the other hand, it's sitting on top of the powder. Usually the powder is so soft that anything metallic falls straight to the bottom. Apparently there was a nearly completed part lying just below the surface...right where it should be. I must have woken up in time to catch it only a layer or two after the failure occurred. And, based on the times, it was only a few layers from finishing anyway. At 125 microns per layer, that's pretty close to a complete part.

My best guess, for the moment, is that the y-axis driver chip on the Smoothieboard got itself into a bad state. I've seen this happen before, but it's been pretty random. The few times I've actually seen it happen it just comes out of nowhere, and it seems like the driver chip is somehow locked up. The affected stepper motor either starts vibrating or gets stuck bouncing between two points. About the same time, the power supply hits its current limit, which would certainly cause weird motor behavior. It's not clear if the PS is somehow causing this, or if the driver/motor is suddenly drawing too much current. My guess is that it's the latter, which probably means either the driver chips are going bad or the firmware has issues. I've had issues with Smoothieware locking up after several hours of use, so that's a possibility too.

The random nut turned out to be from the bracket holding the laser diode to the y-carriage. I suspect that the vibrations from the locked-up motor shook it off. That mounting setup is due for a redesign anyway, so I made a note to do better next time.

All in all, I'd say it was a success. I can now print in polyester well enough to make mechanically functional parts. I haven't tried breaking this part, so I'm not sure how strong it is, but it's held up to a lot of gear spinning...