Don't be dazzled by the new viral hover craze. We were independently working on a near identical system before Hendo went public and you really can do it at home.

Get some powerful magnets, some brushless outrunners, controllers and lipos and a thick sheet of aluminium and you can get things hovering quite quickly. Just make a ring of magnets arranged north south and spin them. It is that easy.

Make them in counter rotating pairs to cancel out the drag and have enough to make a stable hoverbot and you are done. For an aluminium based man carrying version we have done the calcs, it wouldn't be cheap but is doable with little more technology and

It started at a new years party as we saw in 2014. I drunkenly commited to doing everything in my power as an engineer to make a hoverboard work by 'the date' 21/10/15. I get the impression I am not the only one...

I roped my Maker Faire buddy Mark, the other half of Jelly and Marshmallows (www.jellyandmarshmallows.co.uk) to assist, and we started work.

We researched various technologies for levitation, from aerodynamic to ultrasonic, but always the most convincing was magnetics. A while back (2008!) I had bought a strong magnet with the sole purpose of investigating whether permanent magnets could be used to generate eddy current levitation similar to Laithwait's 70s magnetic river demonstrations It turned out they could, and that as far as I knew the principle hadn't been explored much.

Our next step was to make an array of 8 magnets in a 3D printed rotor that could be spun by a drill. The magnets are 20mm N35 neodymium magnets, alternating north south as you go around the circle. We bench tested this over a set of scales with some 3/4" aluminium on. 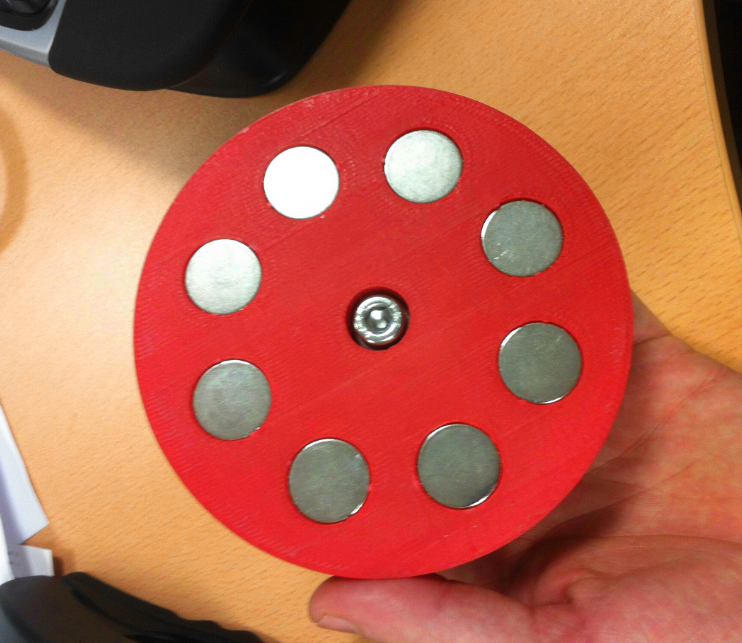 This achieved 2kg of lift at 1cm and 1kg at 1 inch separation. Not bad for a first try.

The power loss is created by drag from magnetic breaking, and the 3kg aluminium plate was on the verge of spinning, highlighting that long term this would need to be done in counter rotating pairs. Miniture test below lowered the torque to a level our meter would measure. This test had lift, torque, RPM, motor voltage and current all recorded... science folks! 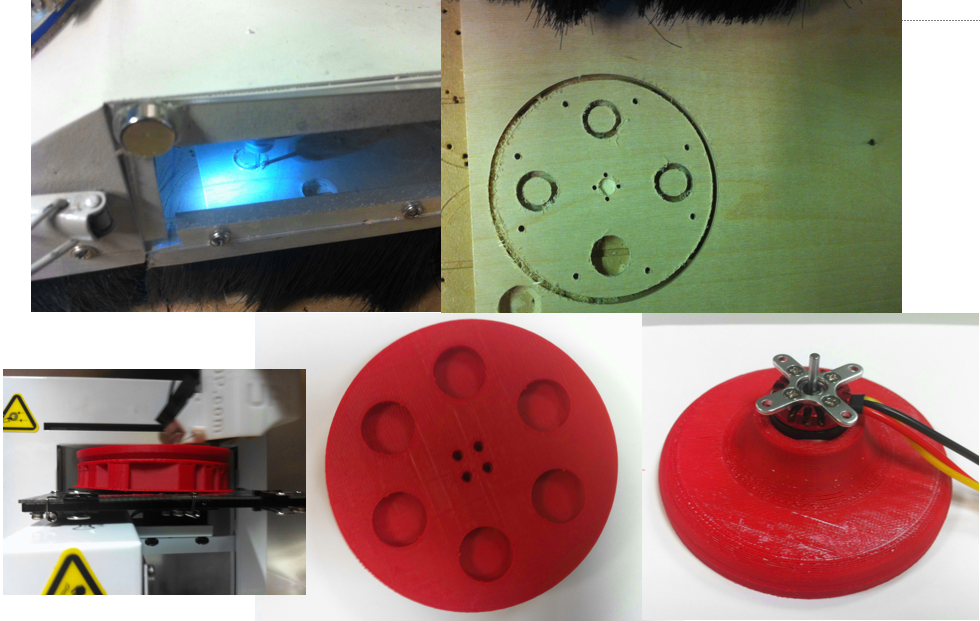 few variations to explore array arrangement and trying laser cut and routed plywood, along with more accurate lift efficiency tests and we were soon ready to make a chassis with a pair of rotors. Pardon the untidy tape holding the cables in. 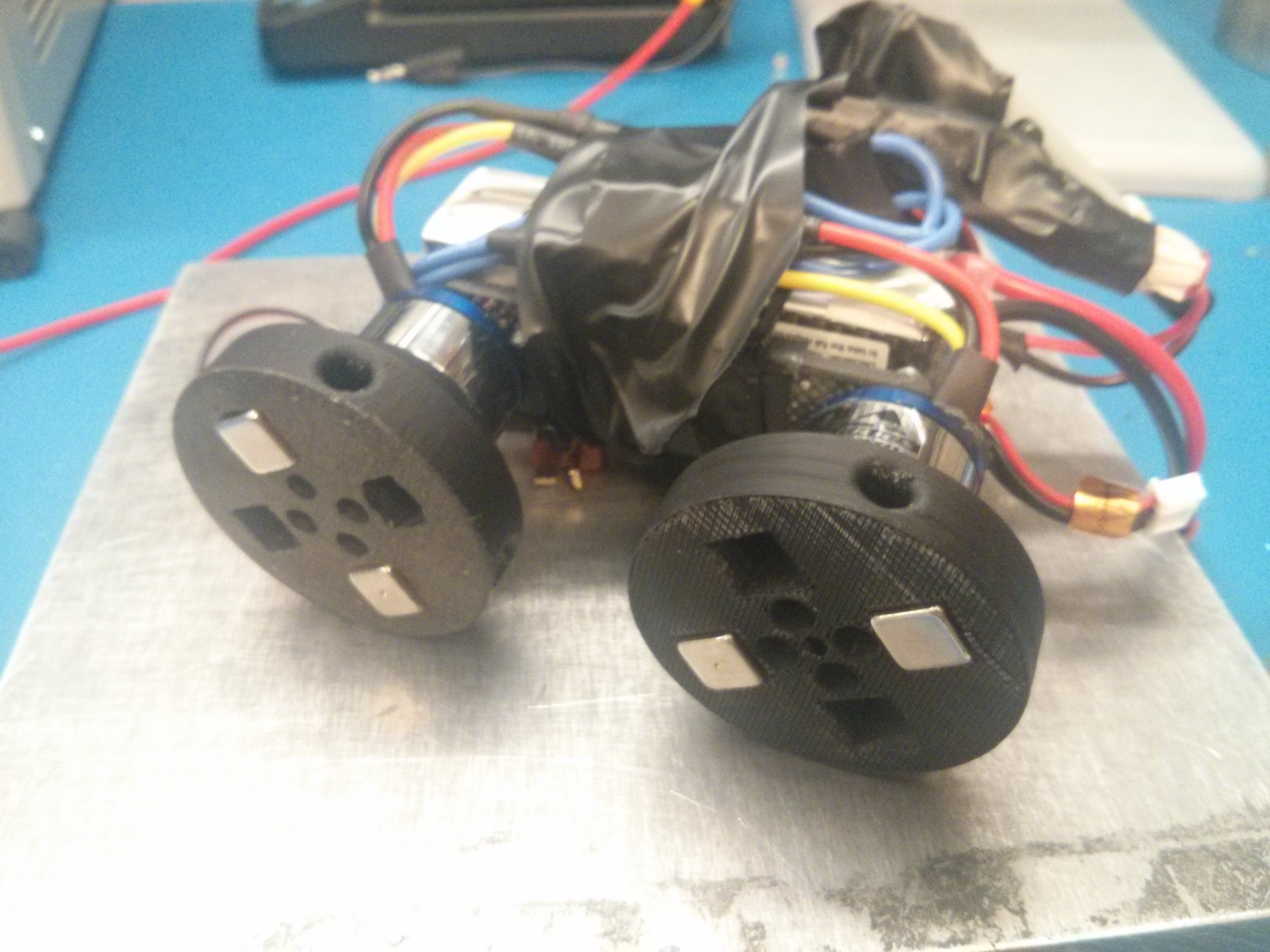 Testing showed we could easily achieve lift of up to 2cm but it was like trying to balance a stationary bike that is twitching sideways. Impossible. Still by holding the cable ties it could be kept from rolling or sliding away and you can see the hovering:

From there we realised it was best to go quad rotor so we quickly put together a quad rotor chassis in time to demo it at Maker Faire Brighton, UK. As yet I don't have a decent video of it but this was a walk around of our stand at Maker Faire

When it is sliding around and not making a horrible clattery noise it is hovering. The lowest part is the rotors because we broke the surround we made, so whenever it gets too low as it moves the spinning magnets clatter against the aluminium. The motion is Mark attempting to steer it (you can see he is holding a wii nunchuck). The control is VERY difficult at present and still very much in development so it needs help quite regularly to stay on the alu sheet.

I will post more videos when I get the chance to take them!

I am using a dc motor for powering the engines as the motor is placed near the aluminium plate the speed of the motor is decresing and the motor eventuaally stop what is the reason for it?

Your motor doesn't have enough torque. The closer your motor is the more magnetic braking it will get. We use brushless outrunners as these are high torque as well as powerful. We have also had success with a geared DC motor designed for an RC plane propellor. The motor needs to be quite powerful but also needs the torque if it goes closer. An alternative solution that might allow you to use your current motors would be to remove magnets or reduce the rotor diameter. This will need higher speed for a given lift, but might better meet the torque profile of your motor.

we tested a single motor. we were able to lift the motors weight  for like 1mm.
now by joining the 4 motors will there be a chance of more lift

what formula do you use to calculate the power needed to levitate it?

I am trying to make one myself with halfbach arrays. I haven't known about hendo before. Now I can't even get my project into a science fair because of hendo patent. But here were all in this together. http://youtu.be/qv-9IAj_YnI

jellmeister wrote 01/31/2015 at 17:14 • point
While I am not a lawyer so the following is opinion and not advice: The Hendo Patent is an application only and therefore cannot be enforced at present (and likely the next year or so). It is also very unlikely to be granted with its current claims as there is significant prior art. I fully intend to continue making my own and think you should too. If you were planning to become a commercial entity worth suing (e.g. start selling them) I'd get legal advice to be safe but I am happy enough to continue as is! Emulating what has gone before the priority date definitely can't get you in trouble so look at 'The hoverboard project' on Facebook; it dates from 2011!

have enough torque to power this kind of levitation? granted, it would carry a lighter load.

jellmeister wrote 01/31/2015 at 17:00 • point
Sorry for slow reply... The magnetic torque entirely depends on the array shape and size. That said if you can get a motor+controller+battery set that greatly exceeds 100W/kg continuous output you are much of the way there.

awsome! i'll look into it.

jellmeister wrote 10/30/2014 at 21:24 • point
Yes, hendo use them. It isn't simple to make circular hallbach arrays without the budget to get custom magnets made though and they are hard to attach to the rotors robustly. I went for simple arrays due to the shape of magnets I have and the risk of accidentally flinging magnets across the room if they aren't secure!

An autonomous structure that auto-deploys and retracts to make the inaccessible, accessible.
Project Owner Contributor

The 2018 Hackaday Prize
Building all the tools neccesary to make chips at home.
Project Owner Contributor