In the last project log, we chose the sensors for the sensor nodes, as well as the uC that powers them. In this project log, I'm going to talk about how the functionality and common issues determined the sensor's form factor.

If you've been following the development of smart homes in the past few years (or months, really), you've probably seen all sorts of sensors (just check on Kickstarter or Indiegogo if you're interested). They're typically some sort of box that you have to place somewhere in a room, and they're typically battery powered, and they're claimed to work for at least one year or more.

This is fine on paper. However, when you take in consideration of how much work it takes to change all the batteries when the sensors die (and they'll probably die at the same time), we have to assume (worst case scenario) that most people would forget, or even worse, be too lazy to replace the batteries.

The amount of additional e-waste created by this type of sensor were also unacceptable to us (some sensors are one time use and require you to toss them out and buy new ones every year!).

Finally, the placement of these sensors become a big issue as well. Where do you actually place these sensors? Do the sensors really fit in? What happens to the system when these sensors are moved? I fear for the day when we have stuck so many sensors in so many places, they become an eyesore rather than a convenience.

To summarize, there are several issues we have so solve by choosing the correct form factor:

1. Reliable and user friendly, and will not be victimized by negligence.

2. Easy to choose placement (so easy that it's obvious before you even think about where to place it). There must be a place in every room, regardless of what's in them.

4. Being able to blend in so well that they're forgotten.

Choosing the right form factor was not easy. However, by looking at the four problems above, the answer became obvious after some time:

The sensors should take form of light switches.

And since we were designing a new light switch anyway, we might as well update the light switch design to something more simple and more modern.

Say hello to the light switch of the 21st century, the Squirco L1: 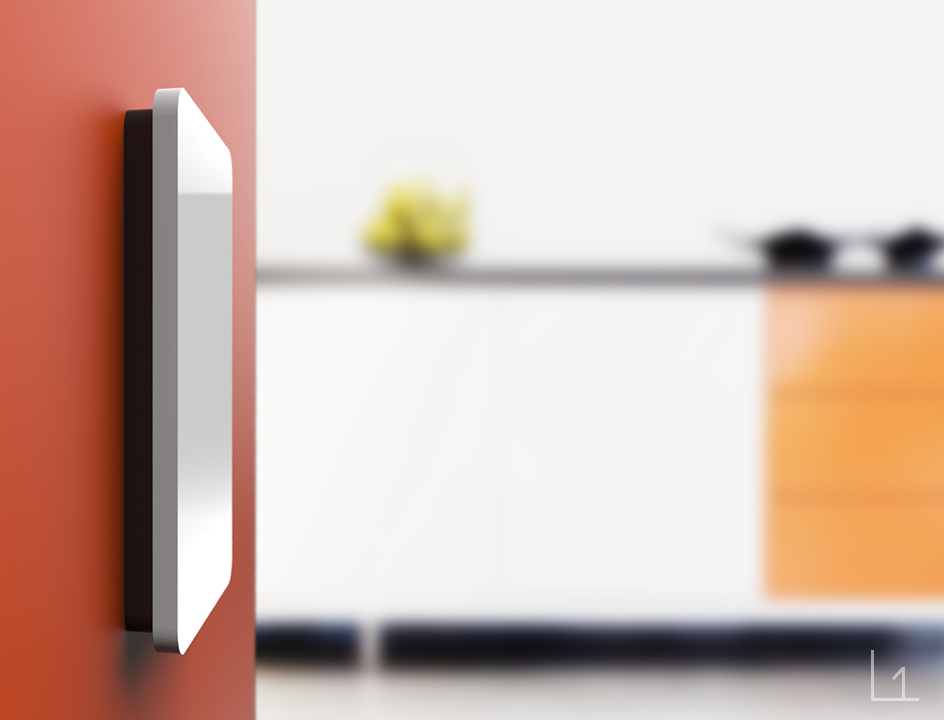 Yes, it's a big, floating button.