Projects which display data or convey information through blinky lights

After being inspired by various NeoPixel projects, I decided to embed one into my window: creating an LED matrix of my own, integrated into an infinity mirror for good measure.

Hello! This is my infinity mirror/window project. I hope you find it informative and entertaining.

I'll start off with a quick video of the final project. This is running a relatively simple 12-band EQ preset on Jinx. 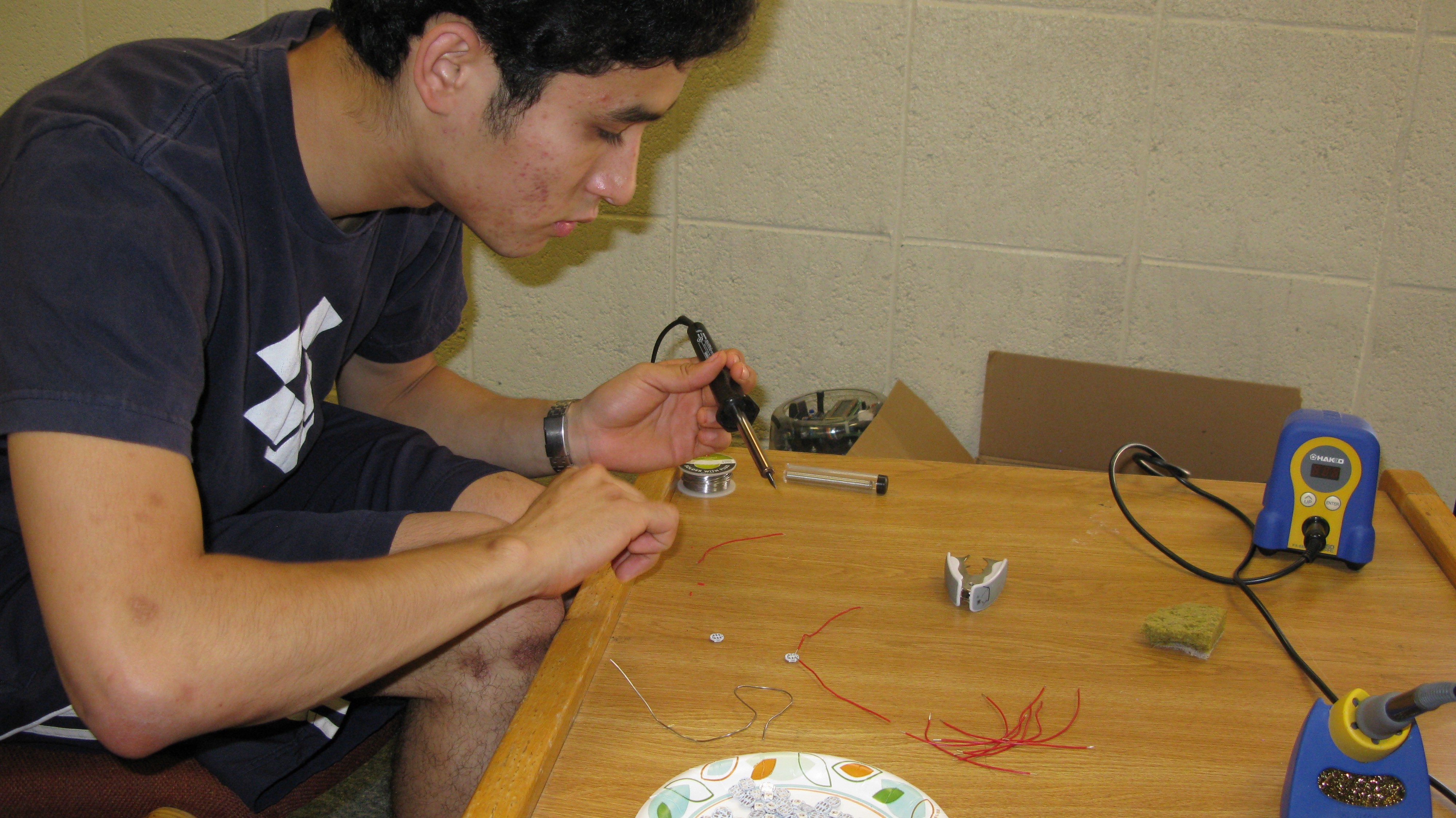 The assembly line begins. I got a lot of free labor out of teaching people how to solder. 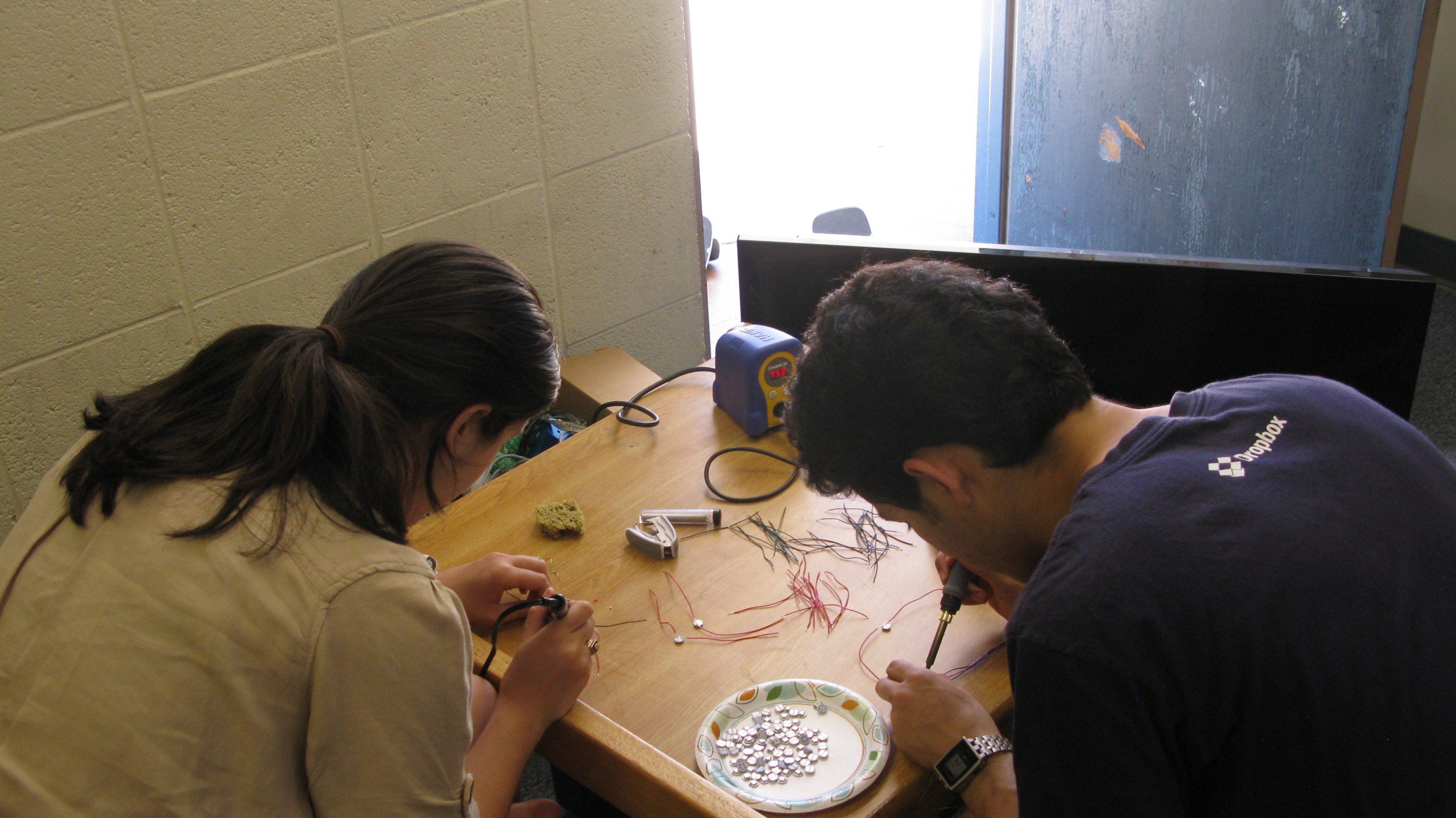 I'm including three soldering pictures to impress upon everyone what a majority of the time this step consumed. Each LED PCB has 6 solder pads: 2 for power, 2 for ground, and 2 for data. They are all very small. Also, at least twice, I made an oops on the wiring and blew out 10-15 LEDs, requiring me to rip them out and start over. Even though I ordered 200 lights and finished with 169, I only have around 5 leftovers. 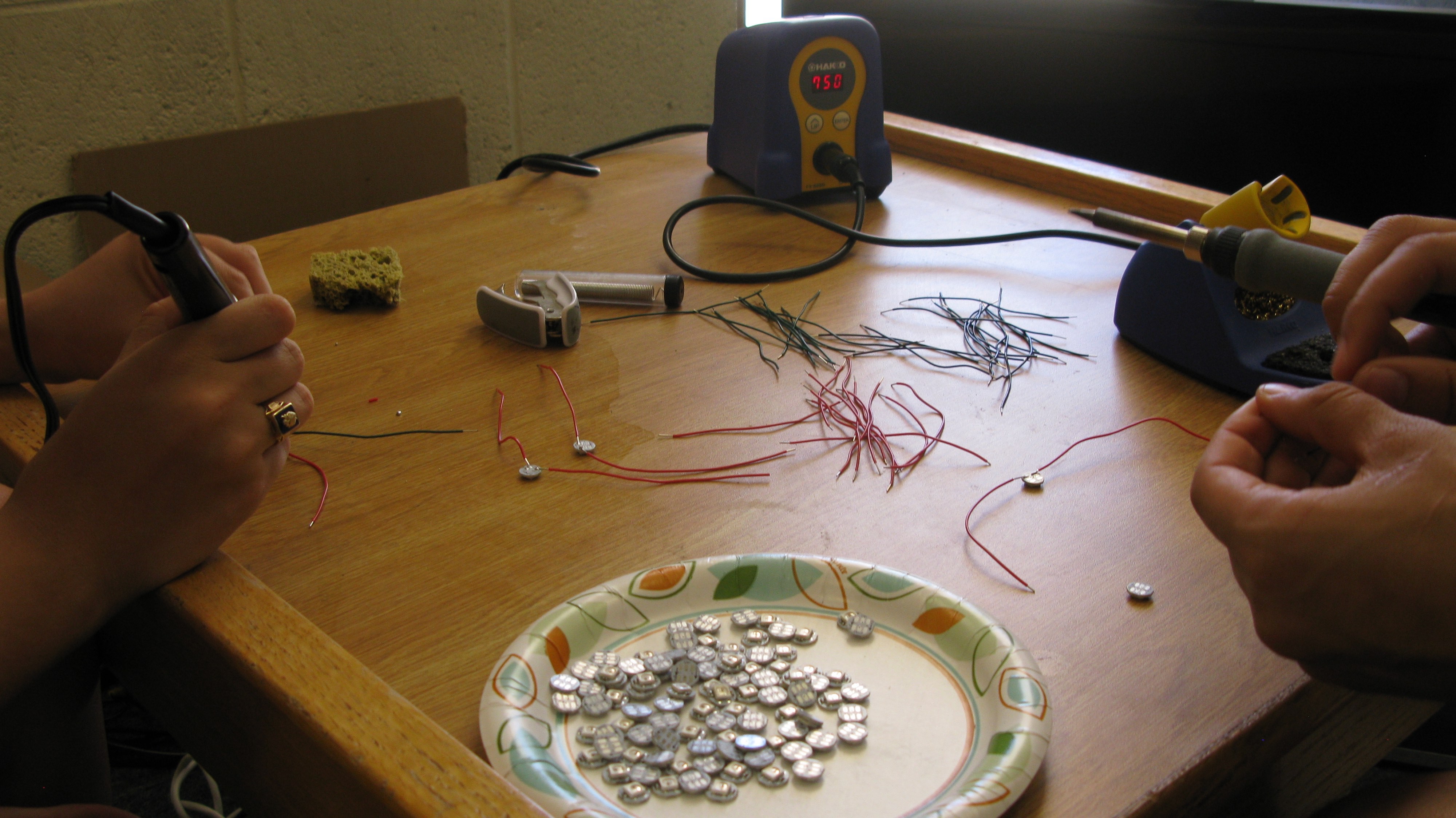 Here's the first prototype, which I built after having soldered 100 LEDs, just to convince myself it was worth continuing. Rather than drilling into the mirror, I punched holes in a piece of cardboard to see how it would look. Therefore, the first version has no infinite mirror qualities. 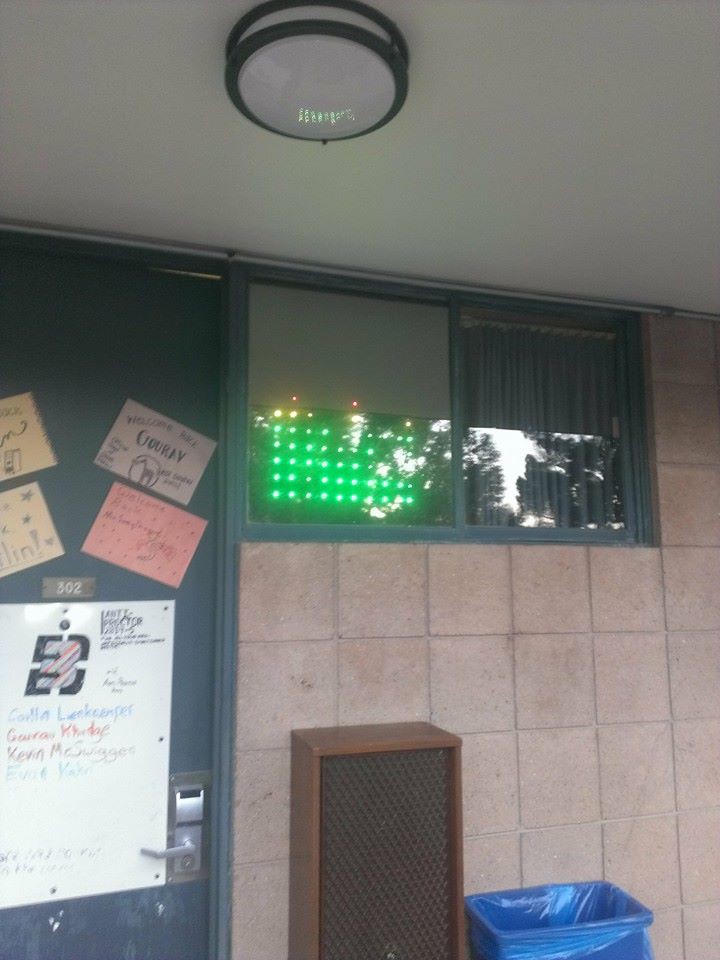 Here I am making lots of holes in the mirror. It's nerve-wracking, because acrylic tends to splinter if you don't clamp it properly, which is hard to do when you're drilling into the center of a 9 square foot sheet. I ended up taking two pieces of scrap wood and kneeling on them as I drilled the holes. 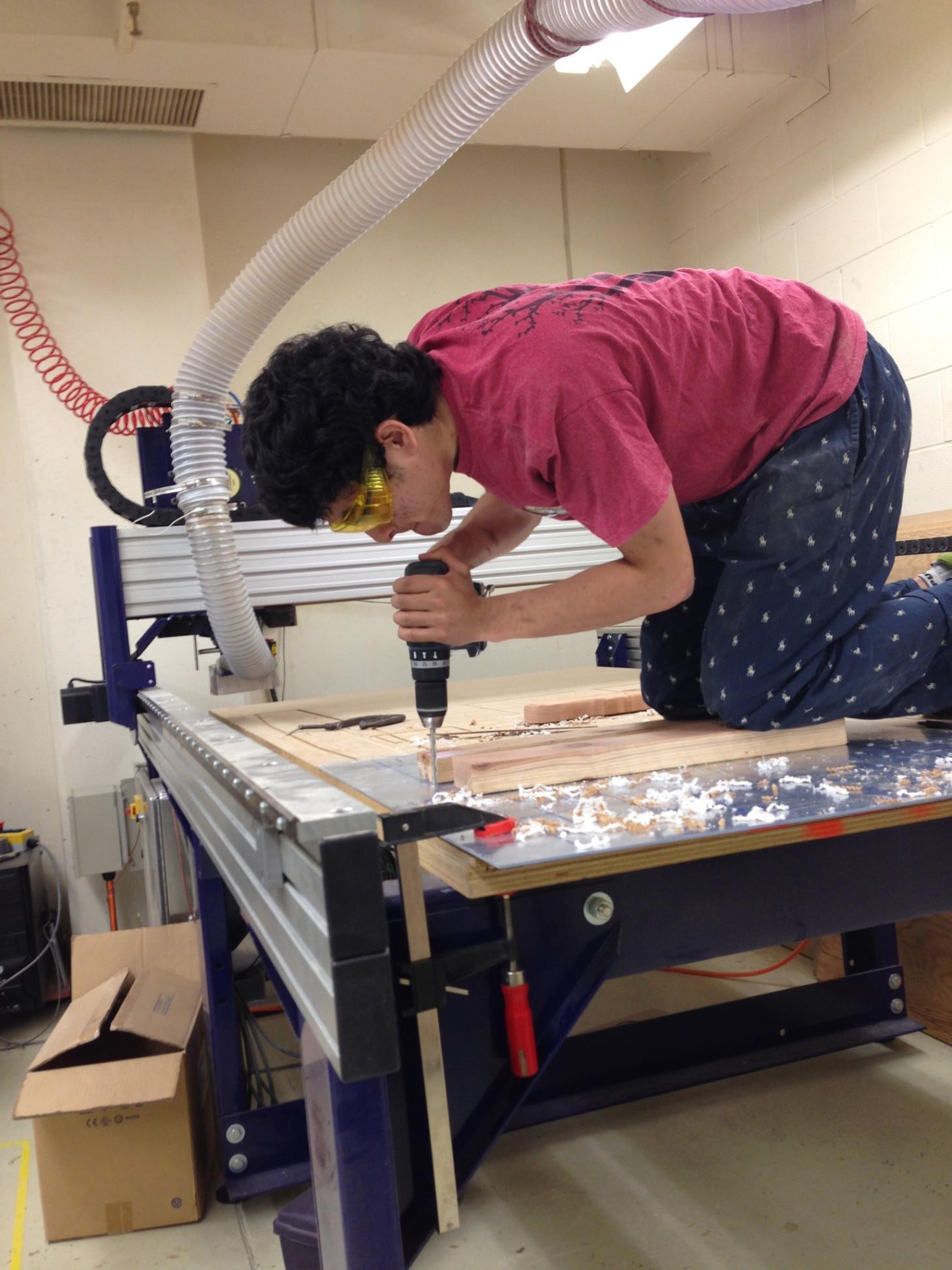 WHY WON'T YOU DIE 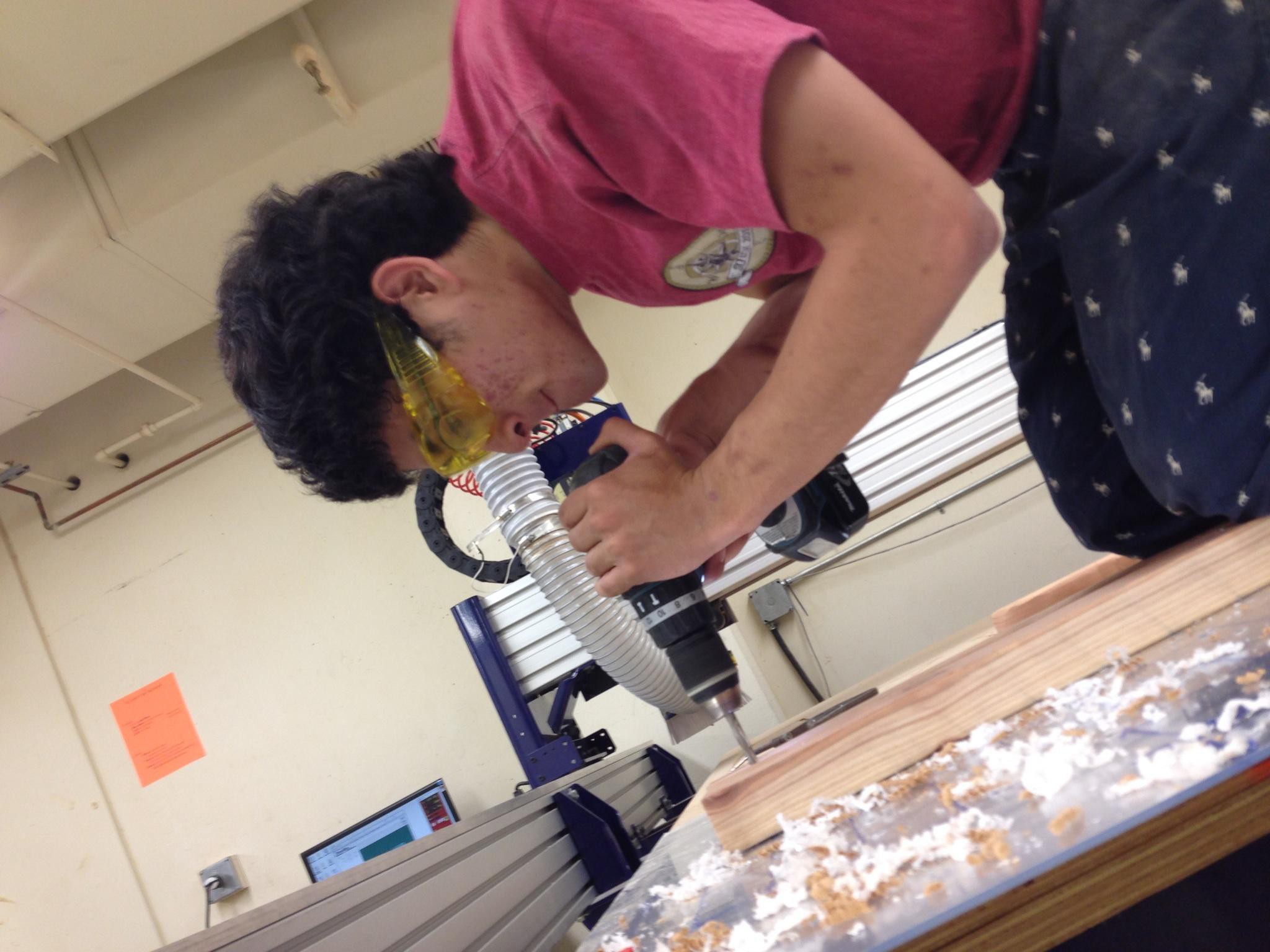 I got really good at soldering during the process. Below: the last 10 LEDs. I estimate that each light took 5 minutes on average to solder, and I soldered every one of the 200 LEDs at least once. That's 17 hours of soldering as a conservative estimate. 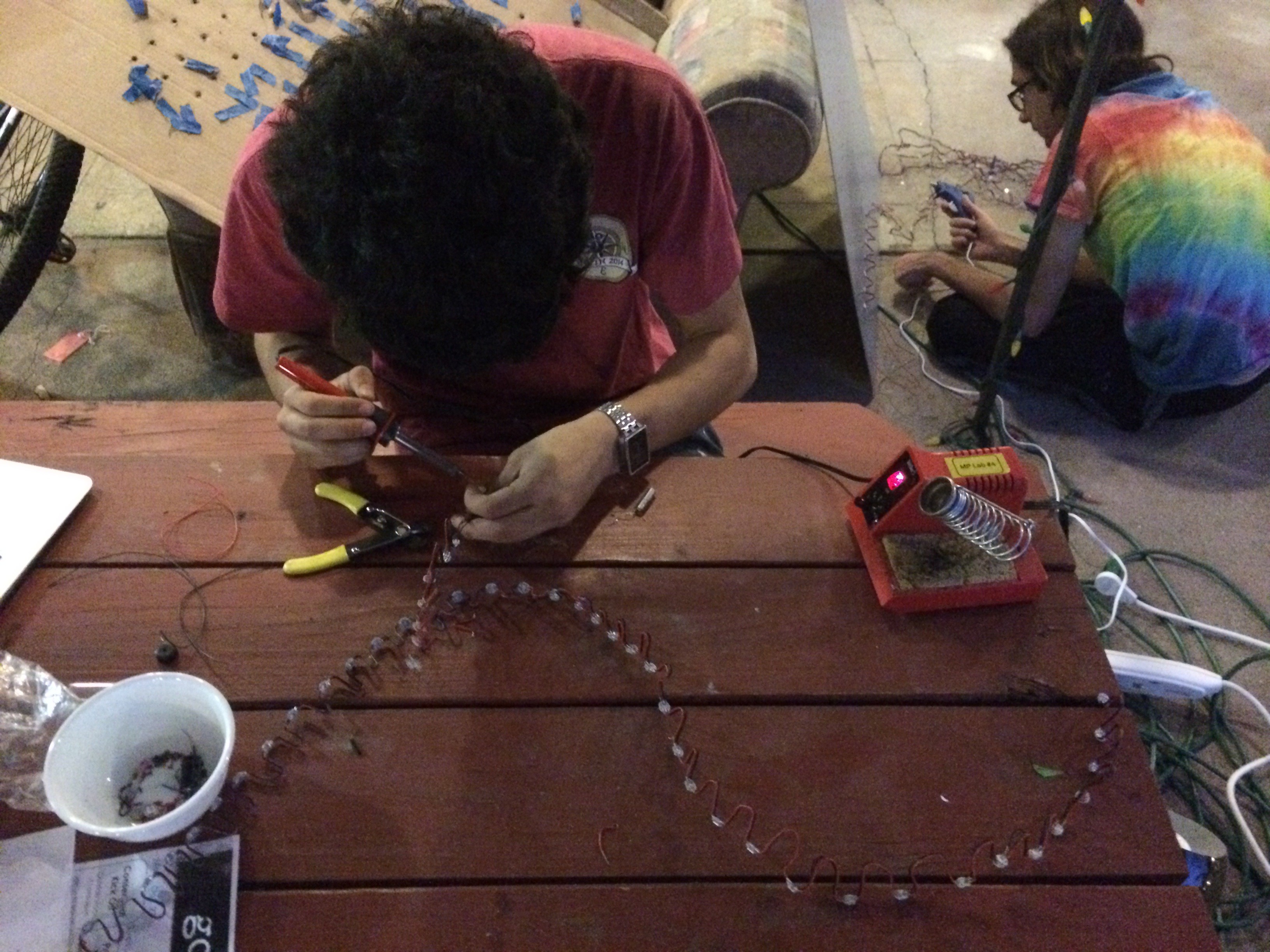 Soldering was almost done, so we started hot-gluing the lights into the mirror. If any of my friends make hackaday accounts, I'll add them as collaborators to this project, but in my knowledge that is not yet the case. 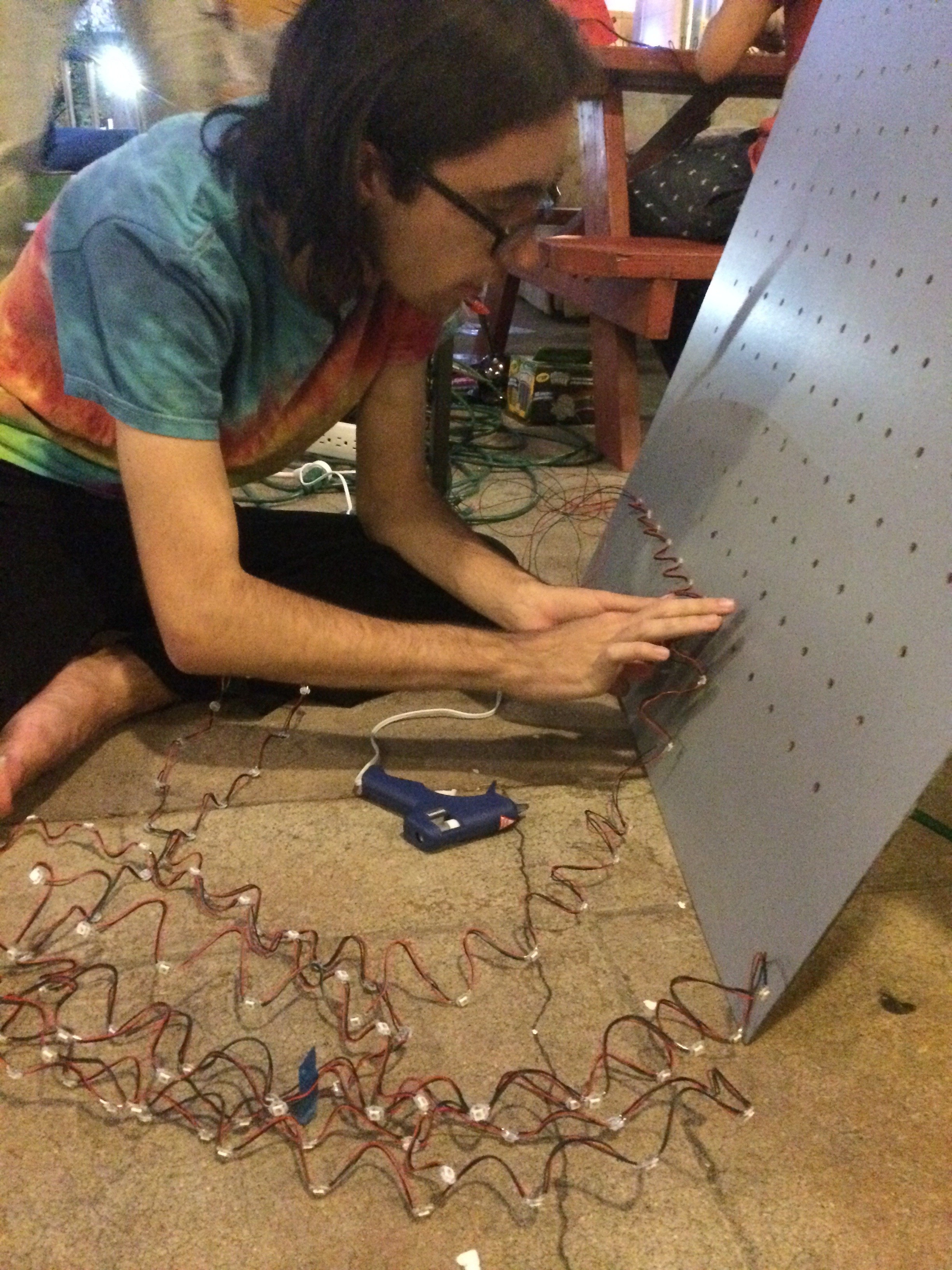 Here's the wiring. I used the 5V out from a 300W computer power supply. Each LED needs up to 60 mA, so the current requirements were substantial. I almost burned out the voltage regulator on my first Arduino because I didn't know what I was doing. 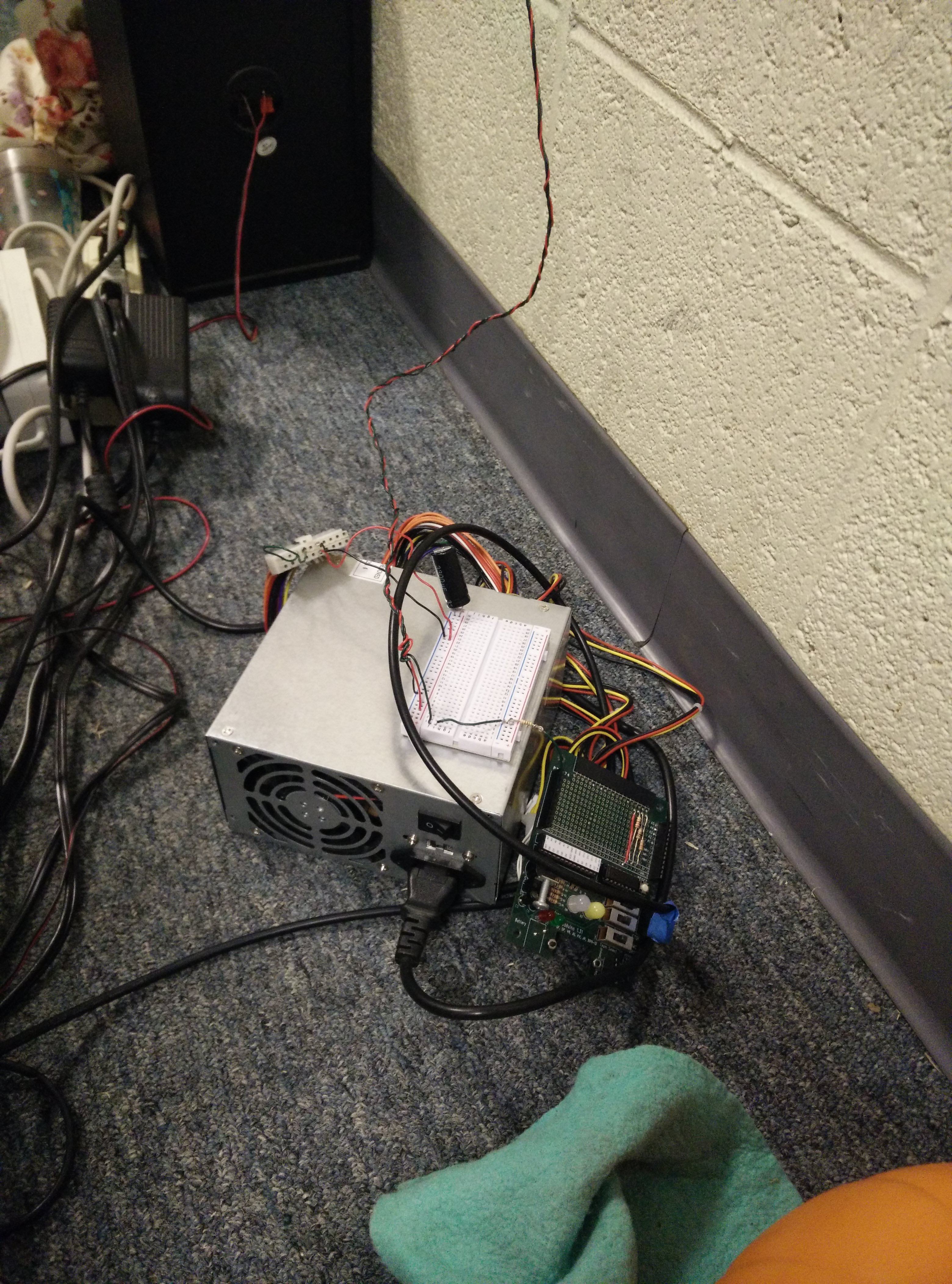 Here's how it looks from the inside. Not shown: applying one-way mirror film to the outside of the window in order to achieve the infinity effect. 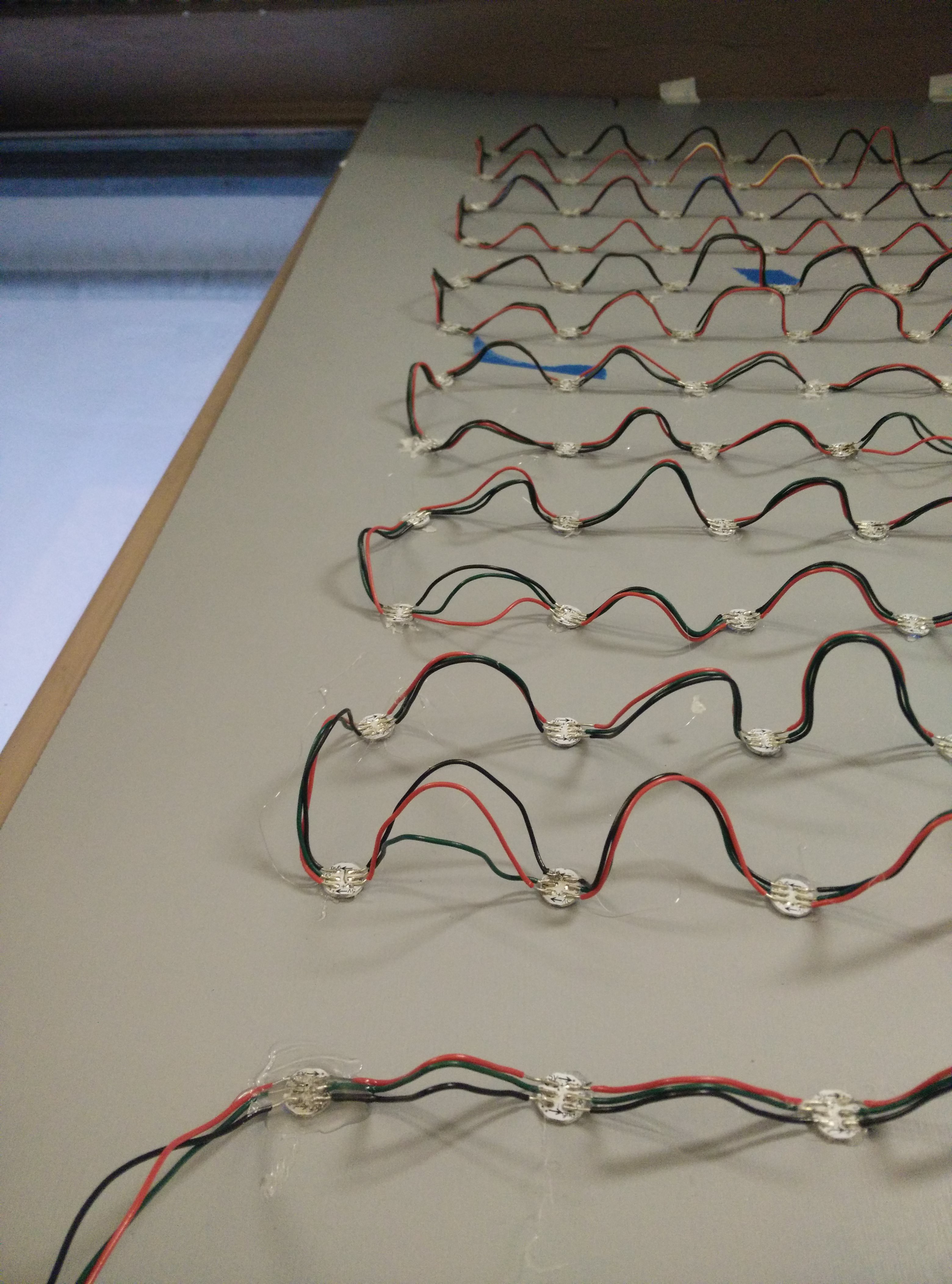 And here's my beautiful server running the lighting software. 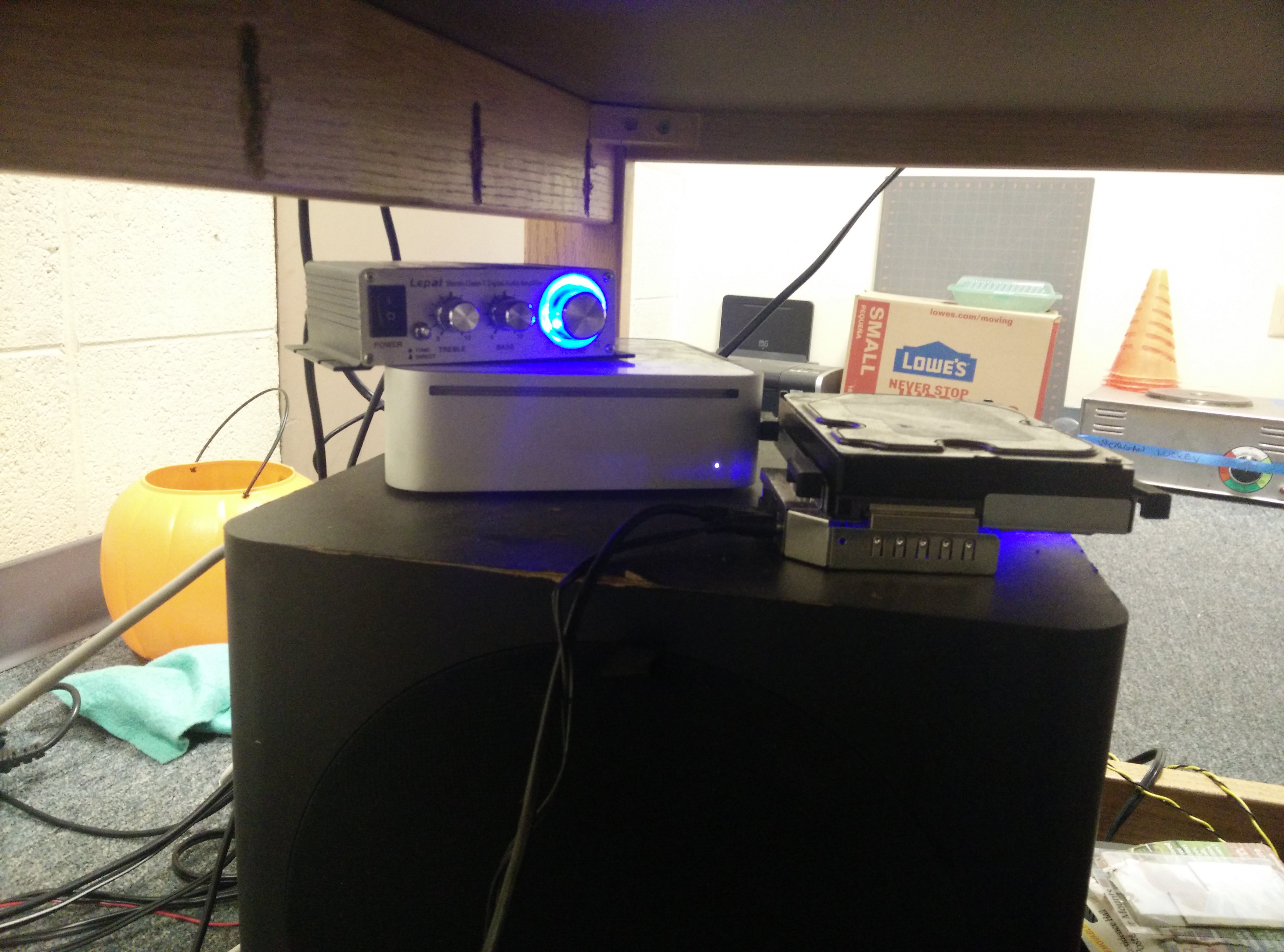 On a beautiful OS. And here's the outside. This is a graphic EQ preset built into the Jinx! LED control software. The speakers below are playing music. 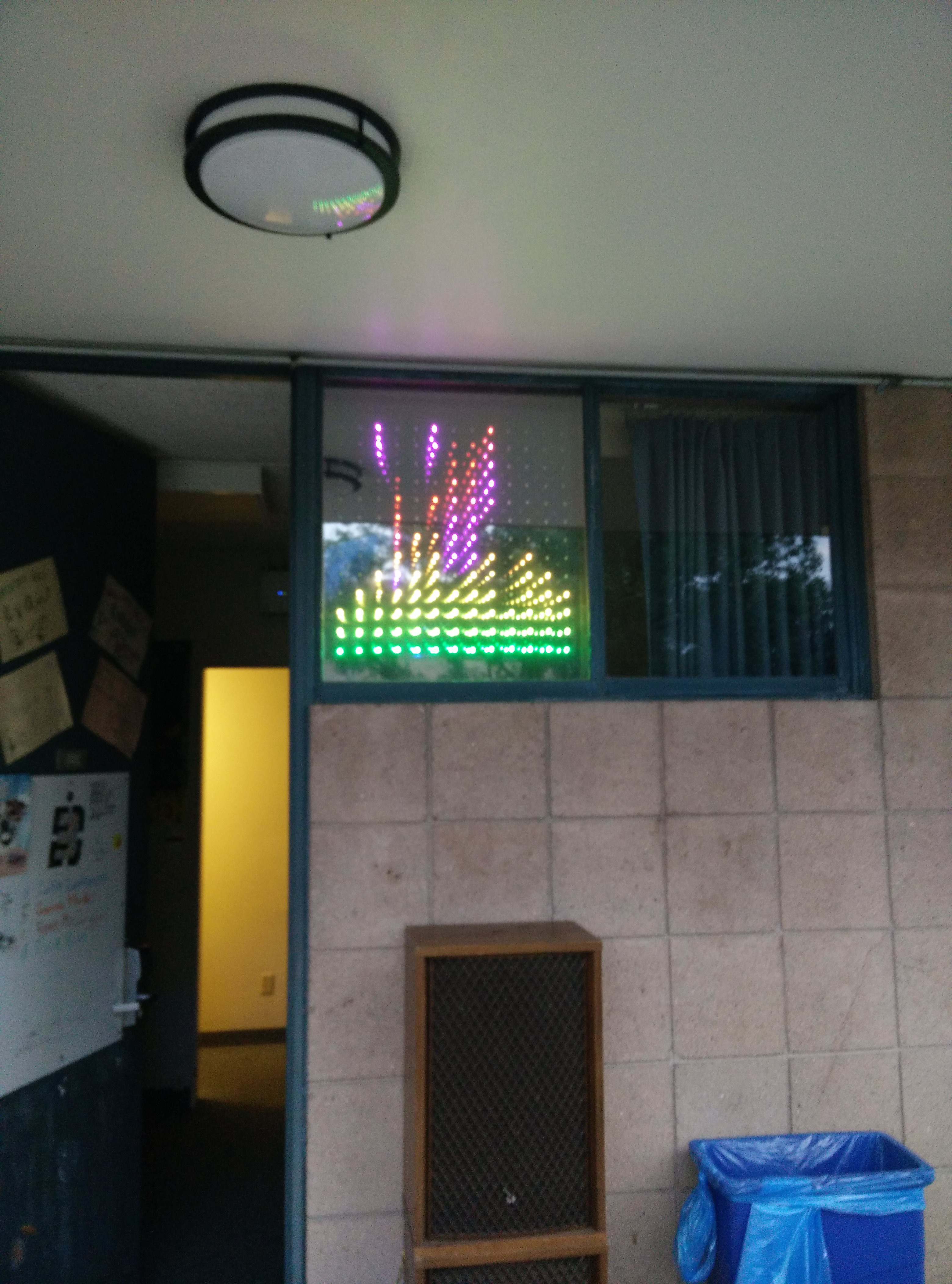 Here it is at night. This is the Plasma preset built into the Glediator software. 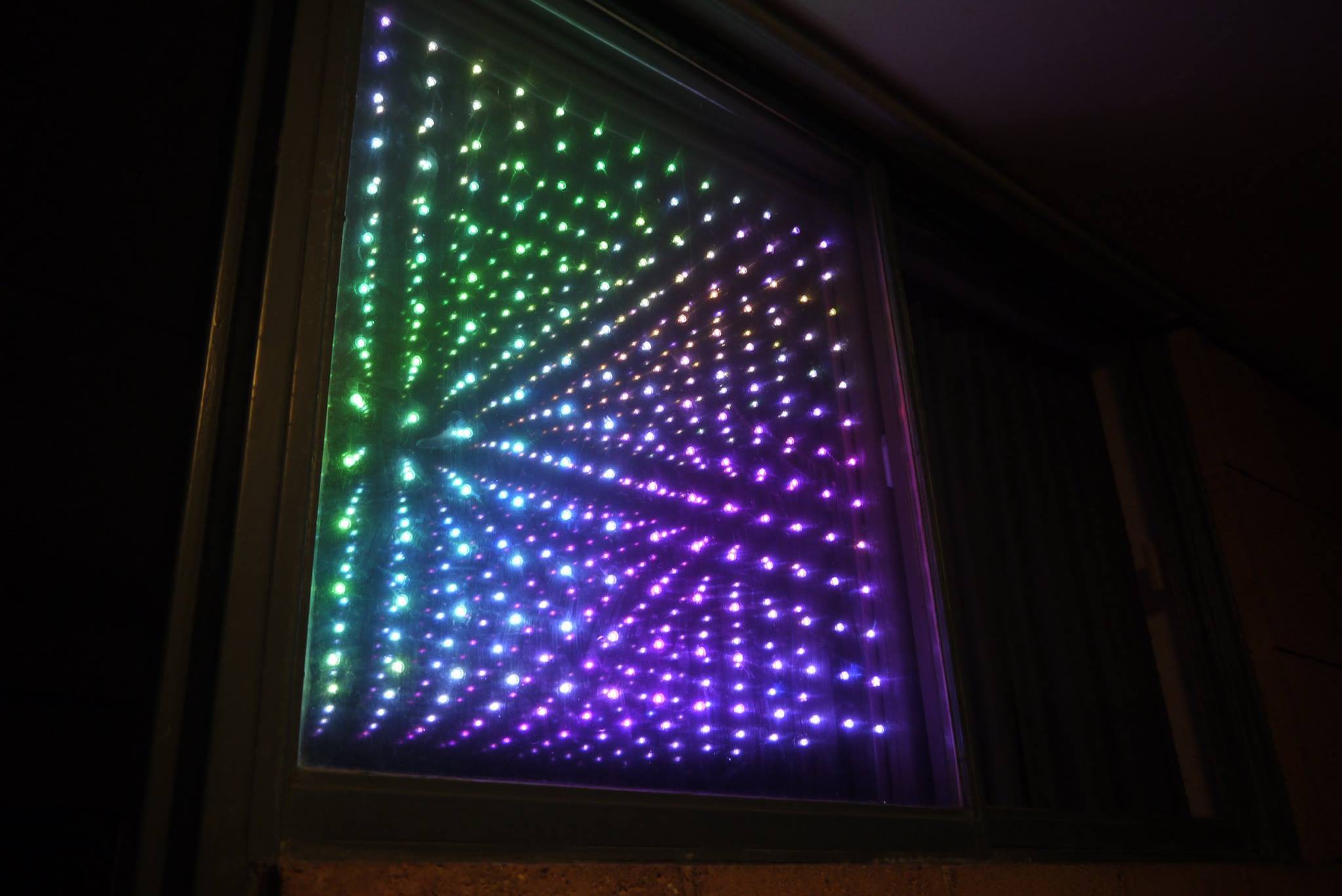 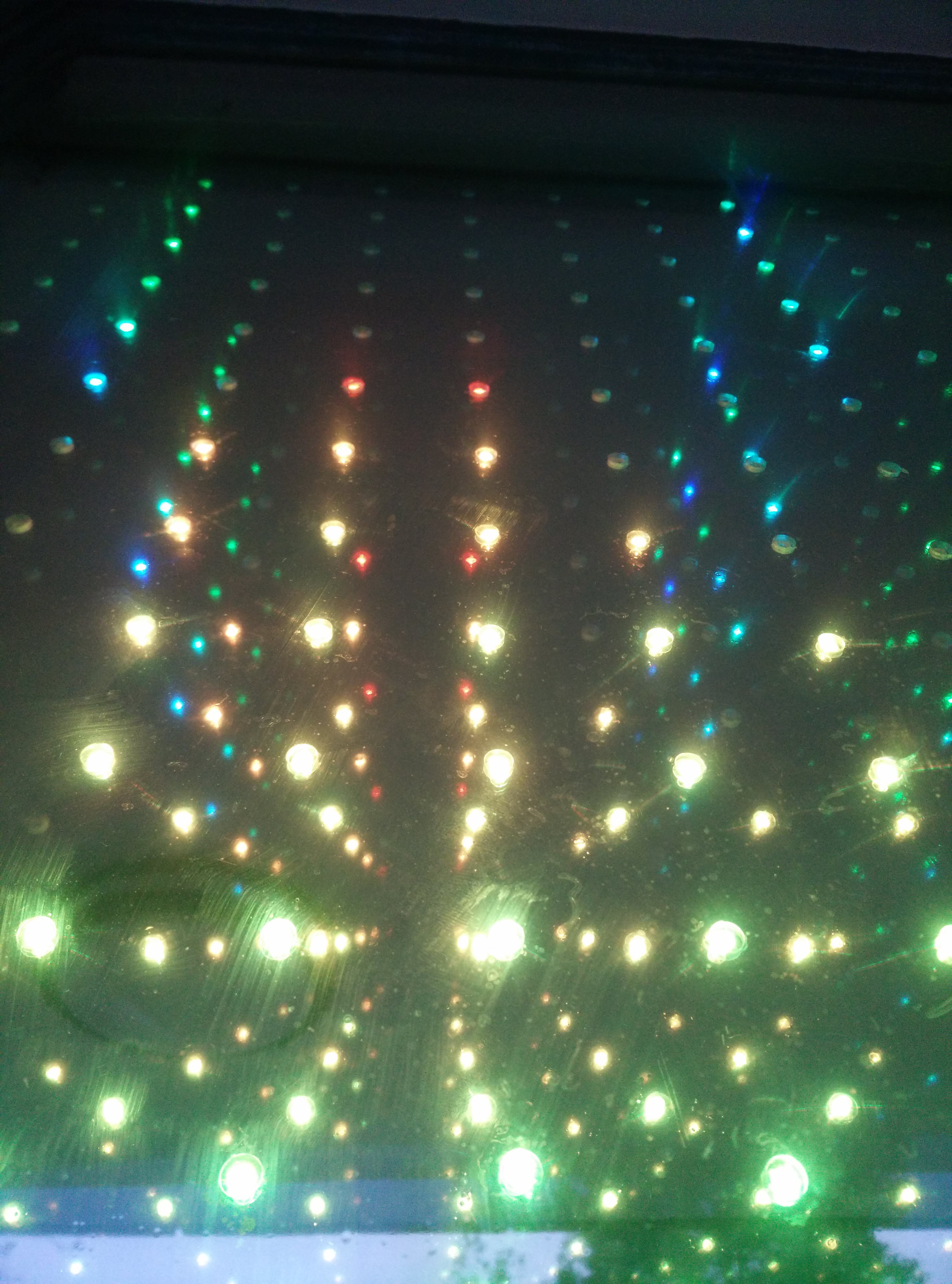 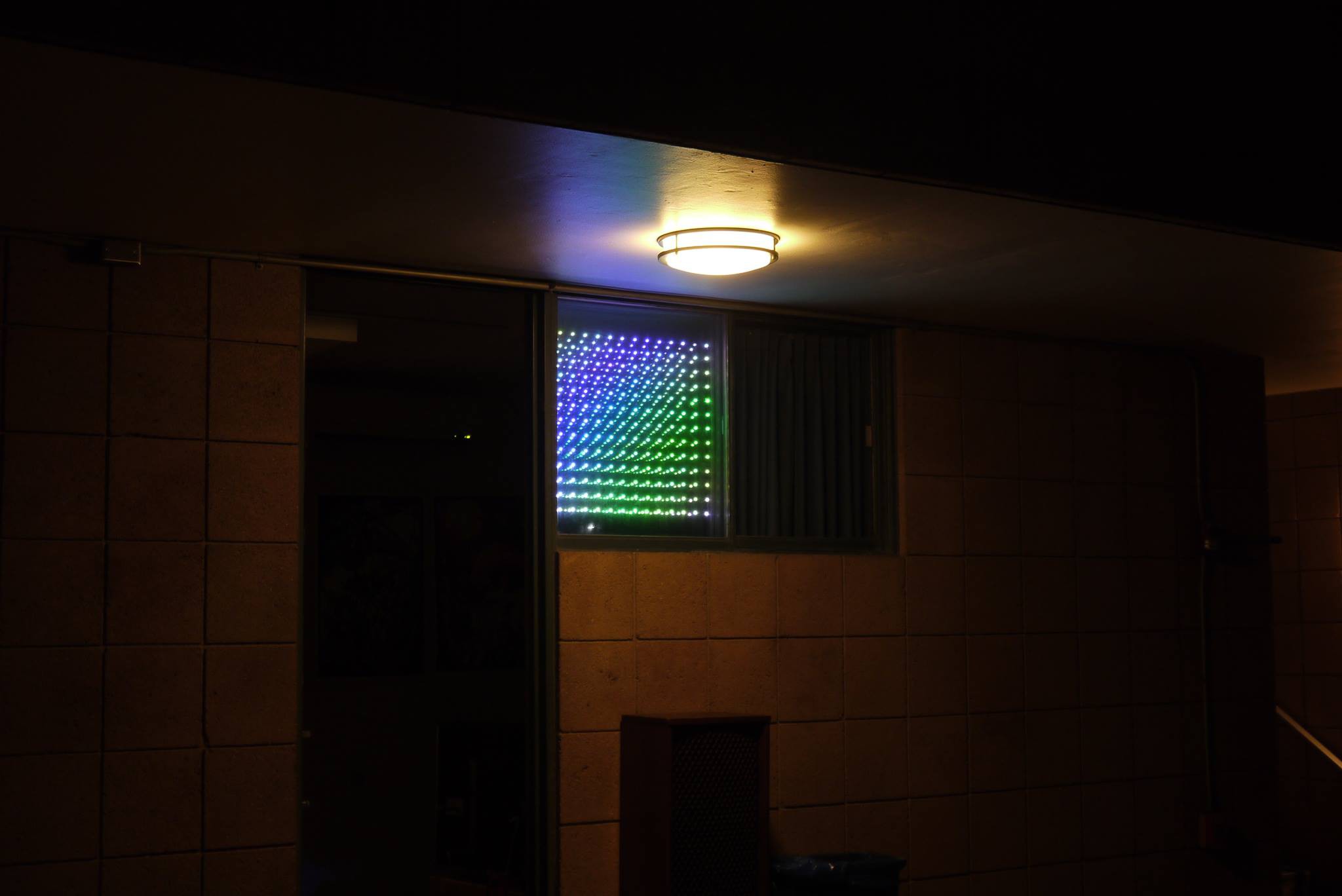 Hope you enjoyed! Message me with any questions.

Okay, MAYBE you can just barely get away with not using the ShopBot to drill the holes (though, you could generate the drill file in something like Excel, if you don't want to learn a graphics program), but there's really no excuse for soldering together all those LEDs when something like the following is so cheaply available. I use these by the ton: http://www.aliexpress.com/item/DC5V-WS2811-pixel-node-50node-a-string-non-waterproof-SIZE-13mm-13mm/1623991325.html

Oh, Mudd! I thought that window looked familiar. (I visited overnight a few years ago.)

Also, why did you drill by hand when you had a CNC router right there?

What kind of router table is that?

It's a ShopBot that my school has. I didn't end up actually using the ShopBot in the project at all.

But why didn't you use the ShopBot to drill the holes? Man, I'd KILL to have a ShopBot available!

It was more work for me to learn to use the ShopBot than it was for me to just drill the holes myself, and I trusted myself more than it to not warp the acrylic while drilling, since it had to be clamped very carefully.

Ah, I see. Well, next time you can invite me over to play with the ShopBot for you. :-)

davedarko wrote 11/16/2014 at 14:53 • point
You can add infinite pictures in the logs and description :) this limit is intended to show the best describing ones... like sort for the max. Would love ro see some more. Is it an actual window? Hard to tell in small - could be dark outside or black by design.