This is an old old project that was put on the back burner (in the shed) for years.

I don't remember when I bought it or if it was working at the time.

This computer was intended to work with monitor that was originally bought with the computer and the power supply was built into the monitor. I don't have this monitor.

I just plugged a 5 Volt power supply into the back of it and ignored the 12 Volt input as I know that is only used for the (3 inch) floppy drive.

As it had a monochrome composite (sync) output, I connected that to a TV and this is what I got. 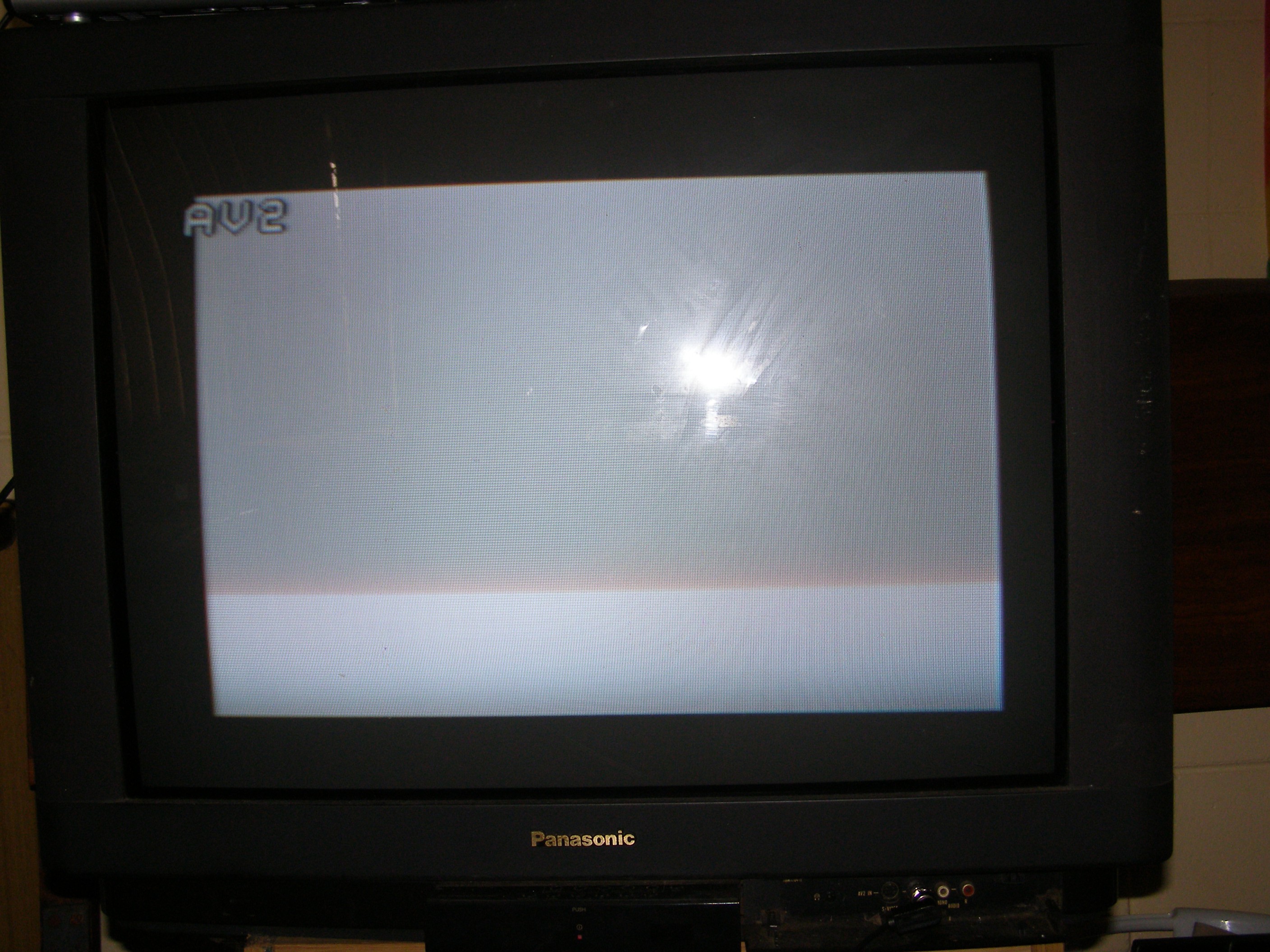 The white area is where the normal screen goes but it should be yellow text on a blue background.

Although disappointing, this did give me some clues. The CPU and CRT controller chips were working as I have video sync, the active area drawn and the co-responding RAM has been blanked by the CPU otherwise I would have a random pixel pattern instead of a white block. 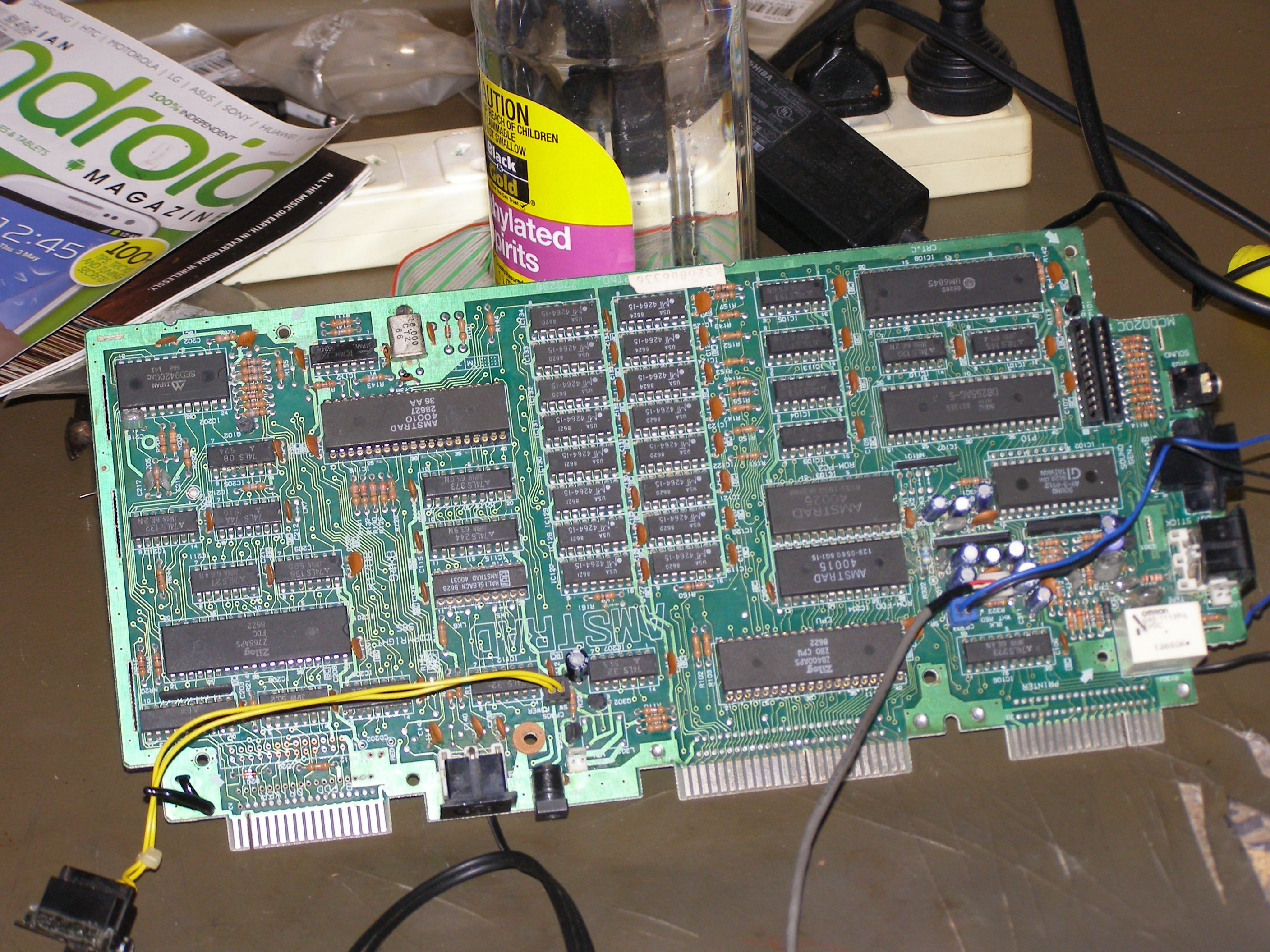 This picture was taken after some sockets were replaced.

It shows the the basic design. The major parts being, Z80 CPU, ROMs, DRAM, Sound Chip, ASIC for video, Gate Array for memory bank switching, 6845CRTC for video timing, 8255 for interface and a FDC765 to control the floppy drive.

The first thing I did was to remove the socketed chips, CPU, ASIC and gate array. 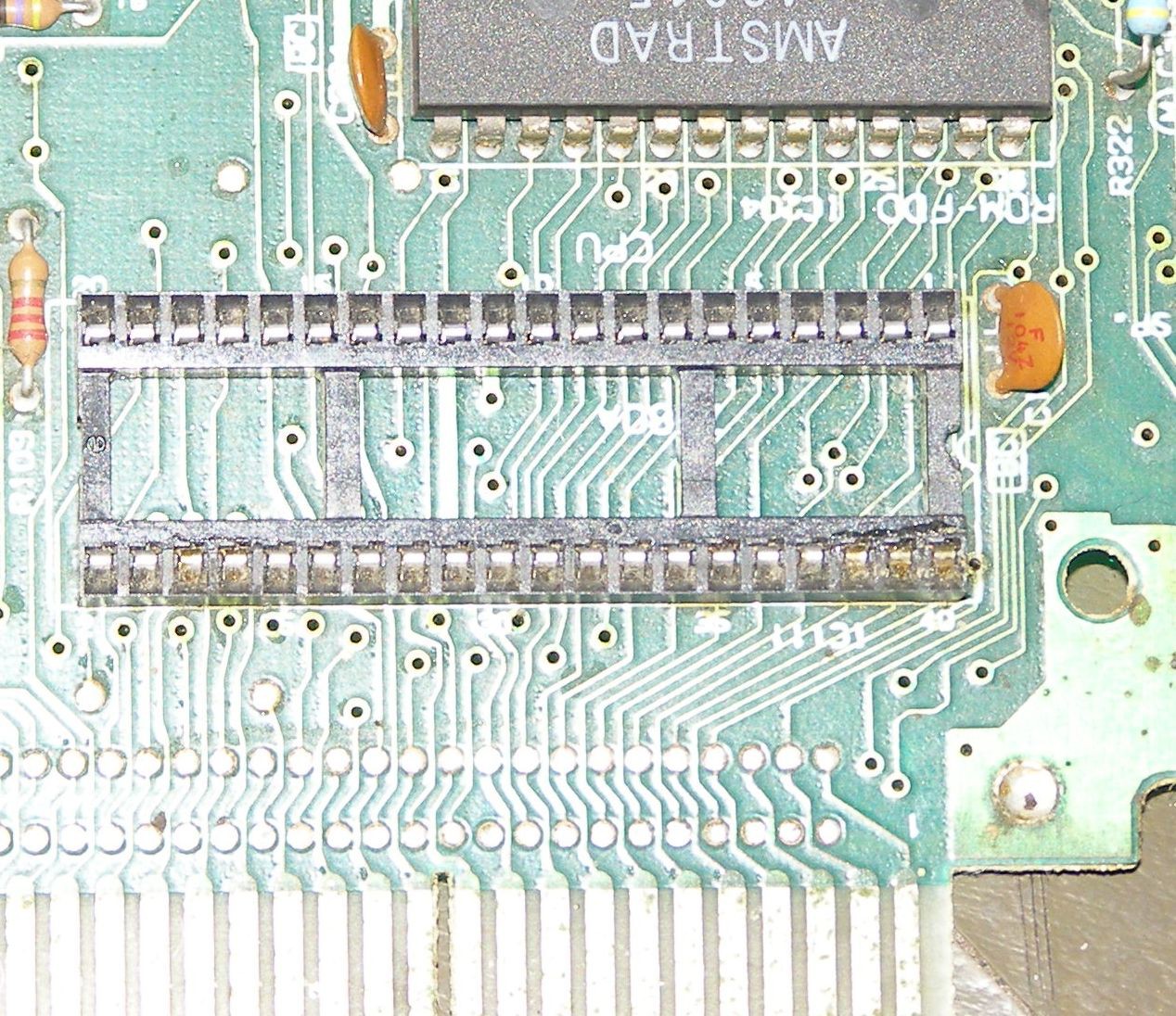 ... a rather dirty looking socket.

So I replaced the three sockets but to no avail. The problem persisted.

I then replaced the CPU as I had another lying around. No joy there either.

Here are the three socketed chips ... 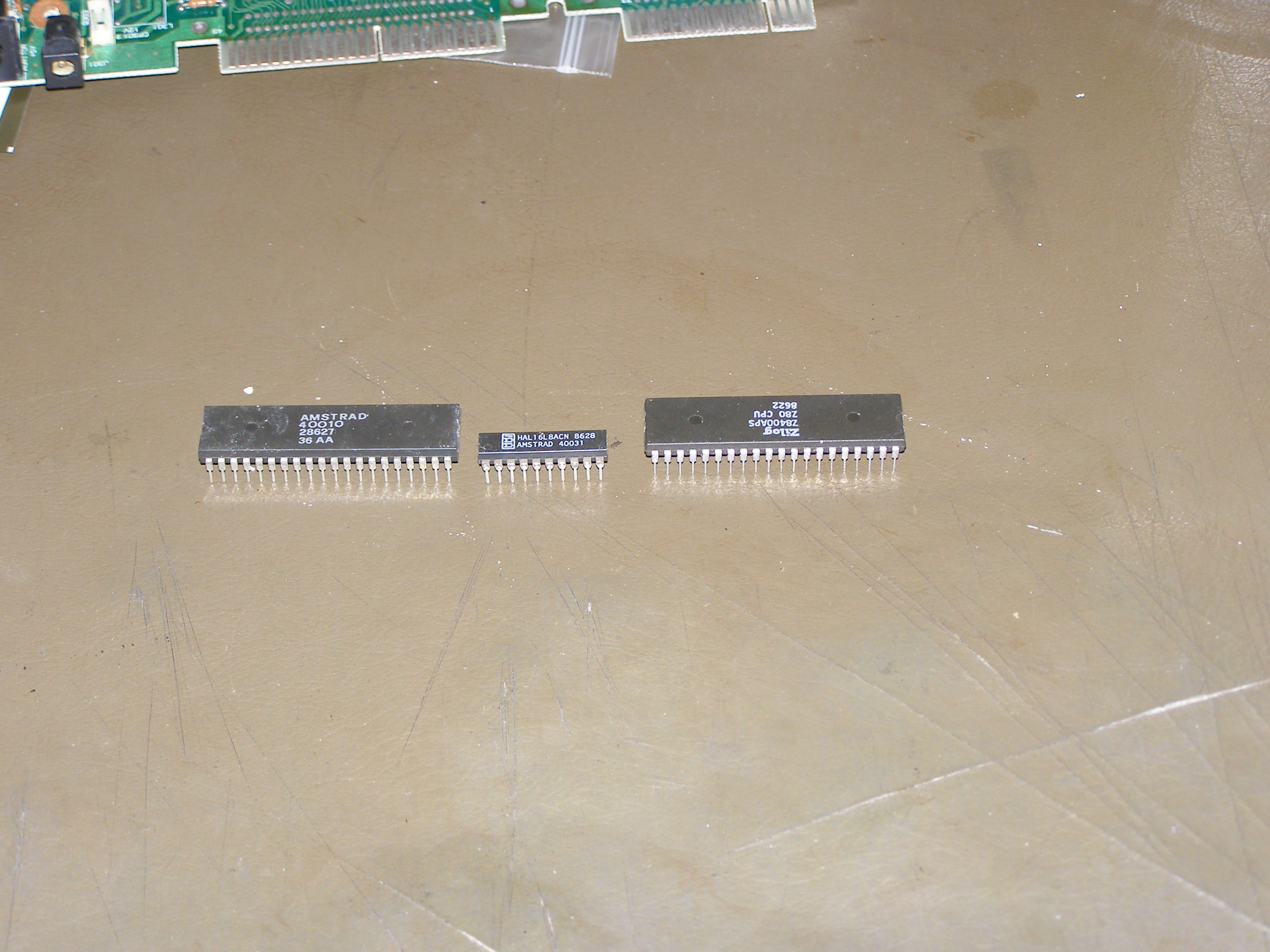 They are, ASIC, gate array (HAL) and CPU.

The CPU is run of the mill and a compatible version is still in production today.

The ASIC is mask programmed in the factory so I expected that I would have no hope of finding that.

The gate array (HAL) has a programmable counterpart (PAL) but I very much doubted I could find the original code and I don't have a programmer for this type of chip anyway.

After looking around the net I was astounded to find a brand new, in the packaging, made in the 1980's, for this computer - ASIC. This is the chip that I though I would never find so I was going to order it even if it's not the cause of the problem.

Even though my main suspects were faulty RAM or a corrupted ROM, I ordered the following.

An ASIC because I wasn't going to miss the chance.

I ordered the CPU as they're cheap and easy to find.

I ordered the 6845CRTC because it is getting rare to find.

I also ordered a logic probe because I am on budget (you'll laugh) ... 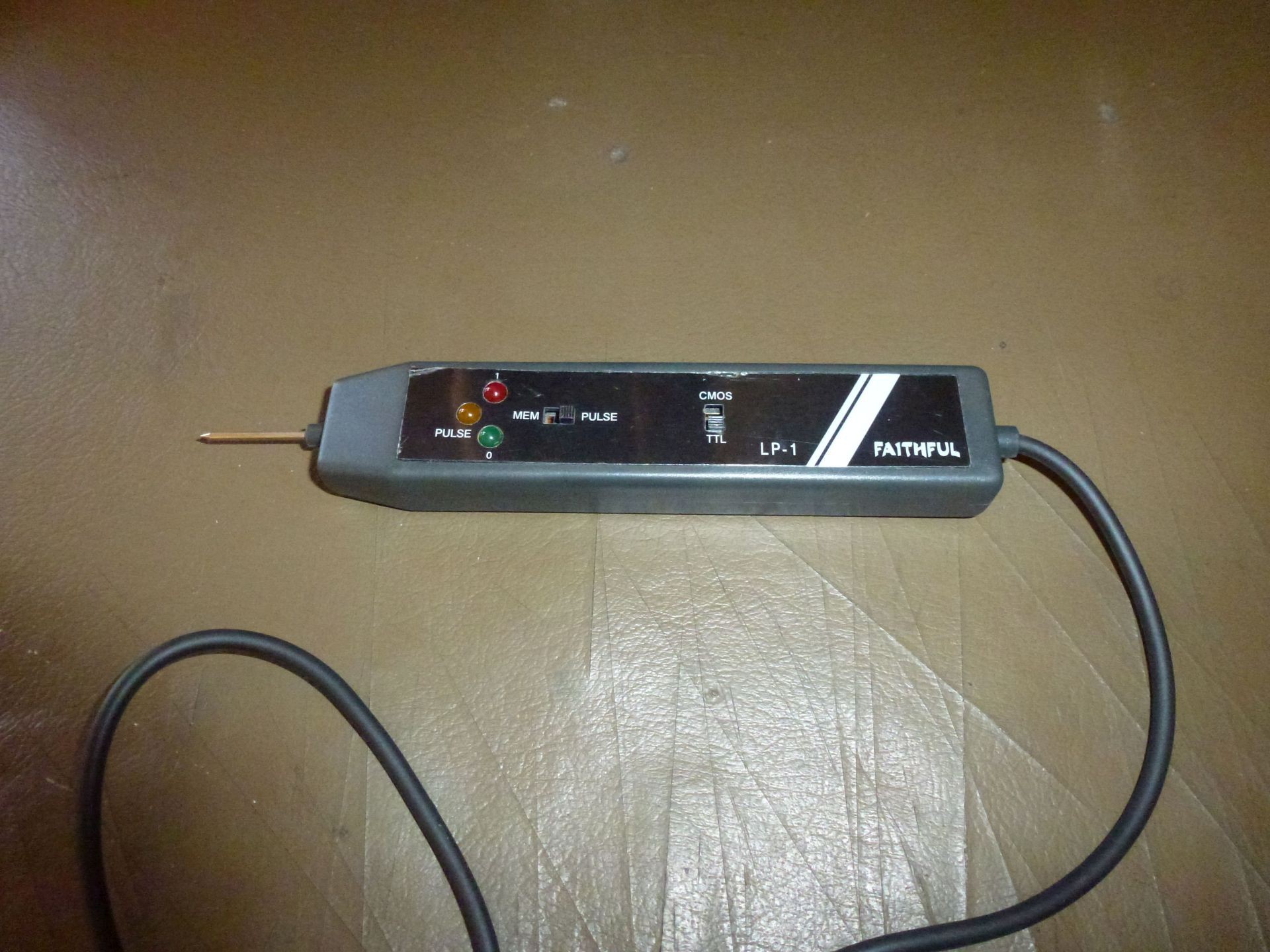 When I received the parts, I replaced the CPU and ASIC. No joy once again but I expected that.

I had one of these computers when I was younger so I had a basic understanding of how they worked.

With some google fu I found a disassembly of the ROMs. The CPU loads up all the registers in the CRTC and gate array and then copies some ROM to RAM before jumping to the RAM that has been copied to. It seemed to me that it was something going wrong with this copy process or immediately after because the CPU was getting to the point where the registers were setup.

I did some probing around with my logic probe looking for a stuck bit on the address or data bus. I found some things that seemed a little odd but nothing concrete.

I then looked around the control lines and found very odd behavior on the interrupt (INT) pin but I couldn't really make any definite conclusion about this.

Well as my main suspicion was RAM or ROMs I decided to order RAM as I don't have a programmer for the ROMs. I really didn't want to replace the RAM as there are 16 chips with 16 pins each. De-soldering 256 pins, what fun.

I ordered RAM and sockets. When it arrived I tried an old trick with faulty RAM.

If you piggy back a new RAM chip over a faulty RAM then often the fault will disappear but not always. Unfortunately, sometimes you will end up damaging the new RAM that you are using to test with. With cheap ram it's worth a try as replacing soldered in...

This is my retro inspired 8 bit 65C02 based home computer. It is a newly designed computer completely built on old integrated circuits.
Project Owner Contributor