No, I'm not dead yet! December has just been a busy month thanks to my marriage and the holidays. Needless to say, I haven't been able to do much work on this until the last 5 days or so.

That said, I've got hardware together and after many many hours of banging my head against a wall, I've finally got the transceivers talking to each other. Let's just say you should take great care when copying register writing commands to make sure the register location was changed... I have a feeling I blew a good 6 hours thanks to that. Let's just say it's a good thing I'm not a professional.

Despite that hurdle, I've managed to rough out some programs and have come away with some interesting results. Largely what I'm doing is sending as many transmissions as I can in a controlled period and logging how many were successful. As it turns out, to make use of Nordic's handy auto-acknowledge feature the receiving end does need to read the receiving FIFO before the auto-acknowledge packet is returned; so both ends of the link need to take an active part.

Using this method does yield fairly reliable results, but the trouble is that when operating on a single channel the results don't change much when distance is increased. I believe this has a lot to do with what I've discussed previously where the transit time is swallowed up by the relatively slow clock time of both ends.

The interesting bit is that performing the same test over multiple channels, as discussed in some of the white papers I have linked, is reasonably successful and can produce fairly good results. The trouble is that what I'm largely doing is in essence a site-survey and rather than accumulating the time it takes a signal to transit from one end to the other, I'm actually measuring the packet success rate.

This is fairly obvious when I test the setup at home and get a higher number of packets transmitted versus when I try it at work where there are more sources of interference. At home I can get nearly 100% success rate up to ten feet away (making any measurements useless under that distance) while at work I'm lucky to manage 100% at one foot.

Still, with some processing of the data I can get fairly consistent results, but any calibration certainly has to be done on-site and couldn't be relied upon elsewhere. Long story short, the results are a bit disappointing. I intend on continuing to refine this a little further, but the end result doesn't work remotely how I had intended and may prove to be too unreliable. 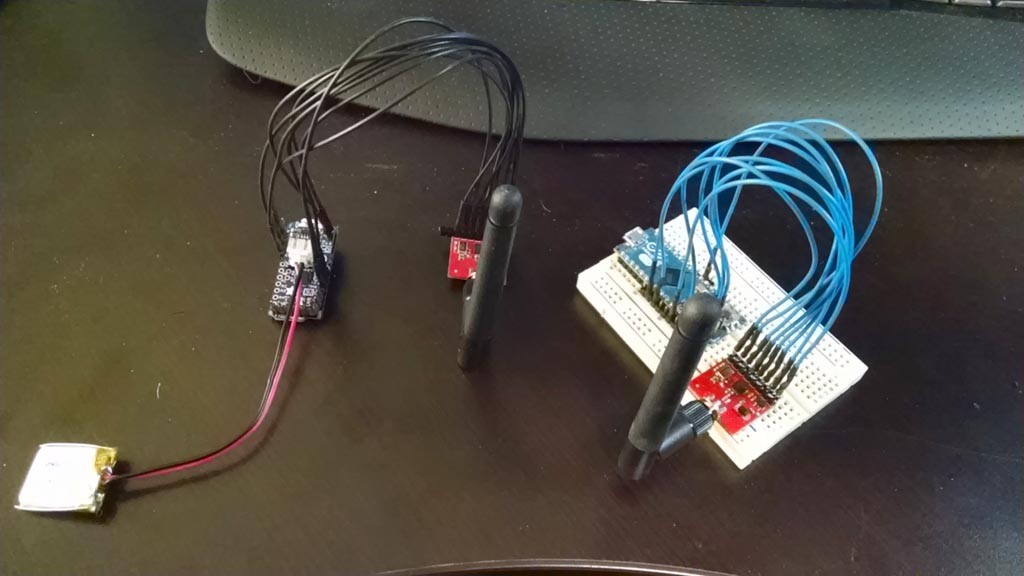 Hardware cobbled together for testing. Ultimately I intend on fitting the transponder into a AAA battery case and direct soldering the antenna to reduce the footprint.

The same test performed at a different time of day. You can see there is a trend, but it has a large spread. 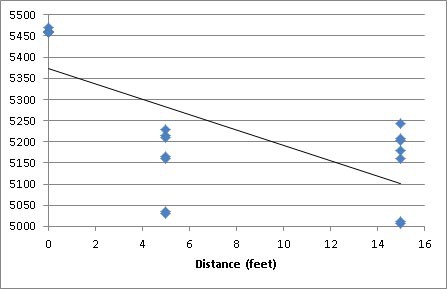 The same basic test again, but this time performing some logic against the result to weed out results that stray too far from the average, then re-averaging the results. In this case I did reduce the period for pinging which reduced the precision, but also greatly reduce the time it takes to perform the test. There's obviously a fine balance between the two.