Pavapro is tiny programmer you can bring anywhere. You can load binary file into it and bring/use it as you wish. And a bit more than that.

Pavapro (Portable AVr PROgrammer) is tiny programmer one can bring and use anywhere. You can load binary file into it, get it at place of business and flash the binary into the AVR. That can be useful for resurrecting bricked AVR project somewhere in middle of nowhere or loading new firmware revision into remote AVR where computer would be annoying or impossible to bring. Just connect AVR, select your binary and here you go.

This would be quite boring, so let's add something more. You can also write, assemble and load your own program into AVR, without using your PC or laptop. Yes, something like tiny micropower AVR IDE running on another AVR (trinket pro).

I assume there will be some FLASH left unused, so crazy late night programming few hours before deadline will show what other functions (don't know, serial terminal maybe?) will be implemented.

Pavapro is relatively small, pocket-able device, allowing you to operate above microSD card, reading binary files (for now only .bin files are supported) and load those files into target AVR device. In addition to this, fuses files (ASCII text files) can be loaded too and fuses written into AVR.

Apart from that, pavapro allows you to open/edit/save text files, as well as there is also simple file viewer, when you don't want to mess with editor.

As if it wasn't enough, simple ASCII serial terminal is included too, allowing to view incoming data on CMOS or RS232 levels. 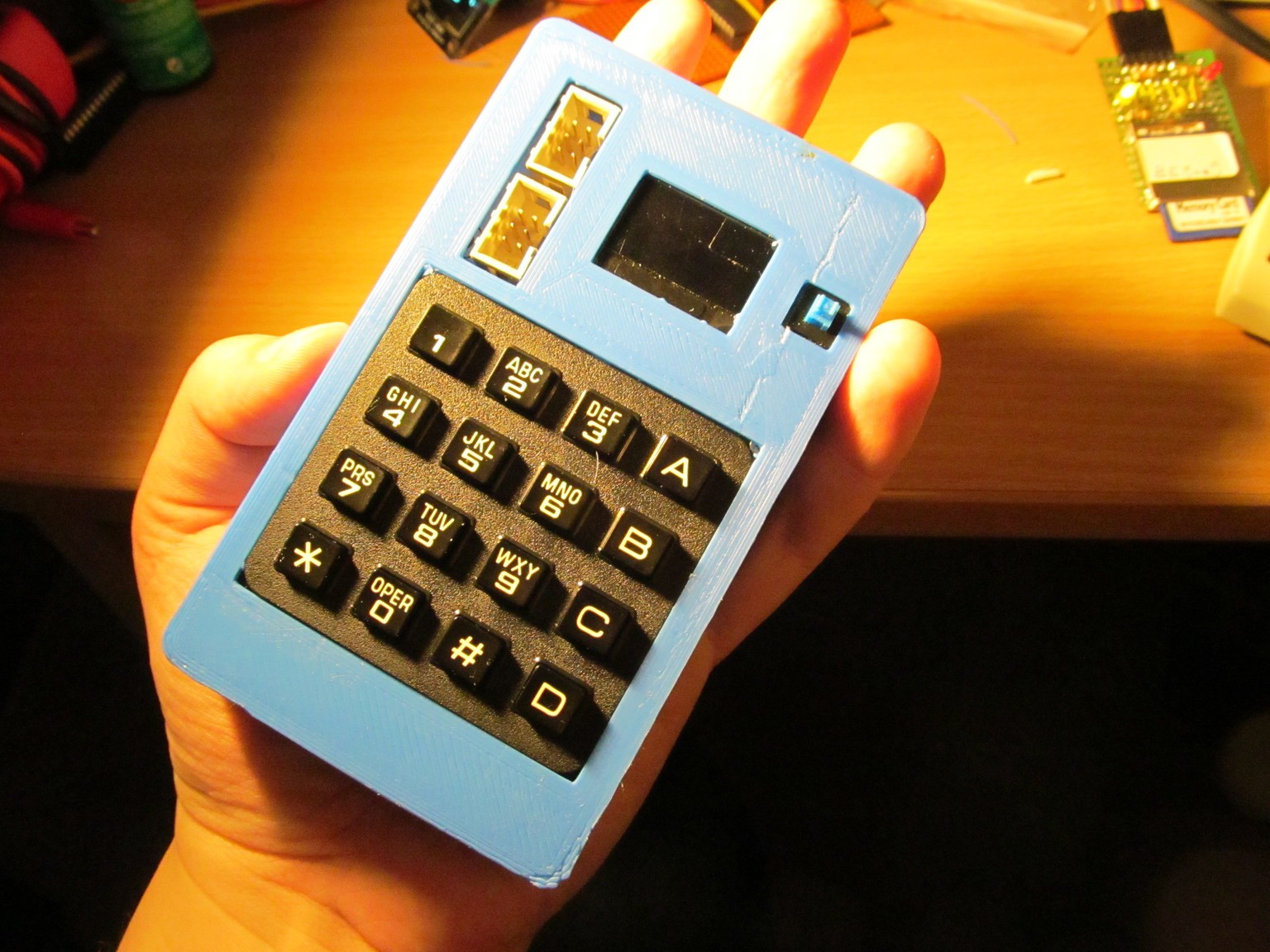 Its dimensions are 118x71x19mm, runs on single Li-Ion or Li-Pol battery, consuming approximately 20mA when running - so, classic 600mAh type will allow to run approximately for 30 hours on single charge. It can be charged from USB micro connector, serving as well for firmware update.

The user IO is done via 16-keys keypad and 128x64 OLED display. The electrical IO is 6-pin AVR ISP header (alternatively it can serve as 5xADC input or 4xIO line) and USART on CMOS levels as well as RS232 levels, plus one universal CMOS IO on second 6-pin connector.

Total price of components was around 20EUR + PCB price (could be anything, beginning from 0EUR if you have good fellow hacker, thank you David!)

The develoment of pavapro was done on free (as freedom) or free (as beer for free) tools under Linux and all design source files are freely available on github - so anyone can take the project, build, alter and contribute.

Though I'm running on FOSS tools, I understand that a lot of people runs windows OS, so I took care to select tools that have windows conterparts. 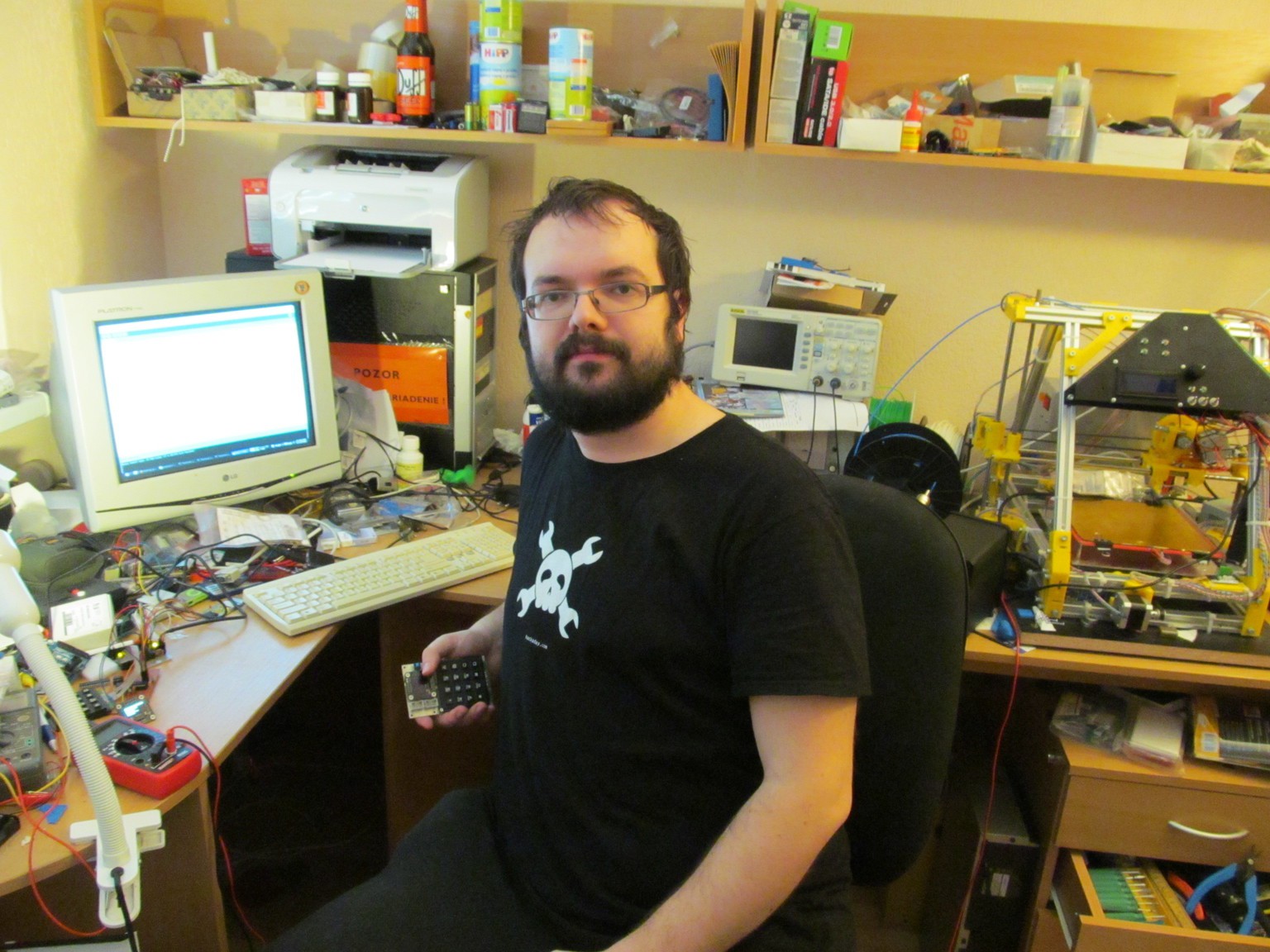 Myself, while working on pavapro.

Want to build one? Here is how.

And another video, showing other features of pavapro

Hello. I recently came across this project, it's great. I also have some questions about him. Is it possible to use the st7735 display, it has a built-in SD card reader. The 4x4 keyboard seems terribly large compared to the LCD. You could use four keys (up, down, back and enter) if you did not use the edit file, asemble and serial terminal functions

can you program a arduino w/ this? not sure what you mean by "recovering bricked arduino"

Awesome! This is something I wanted to build so badly when smartphones came up. I imagined myself sitting in a train or public place programming away and giving people that "yeah can your phone do *this*?"-look.  You rock, man.

Oh, thank you! I love to hear somebody has so similar thoughts.

And now shameless plug: You may want take look at #PP04 - Camel computer

Congratulations Jaromir on getting second place in the Trinket Everyday Carry Contest!

We'll be sending out a Fluke 179 with a 6 piece industrial electronics tip kit soon.

Jasmine, thank you, and all the HaD team for this great contest (and silently hope for more contests like this)! The second prize is fantastic credit for my work.

Congratulations! This was in my personal top three (like the first and third) - I'm happy for you and the other contestants, but also for being right this time - not like on TheHackadayPrice. Great work!

Wow, Jaromir... fantastic work! It's been a while since I checked in on this one and I'm shocked at how polished the finished build is.

I like the fact that there's a lot of supported chips. And the published code and well-documented user interface would make it pretty easy for people to add other chips/architectures for their own uses.

Mike, thank you for your compliment.

I tried to cover as much of AVR chips as I could by simple means. Having other architectures would be quite challenging, but I love challenges, after all. The concept wouldn't have to change that much, but more beefy MCU would be needed. Honestly, I'm quite inclined to make pavapro mk2.

As title says, my random essays about microcontrollers, all in one package
Project Owner Contributor

The 2015 Hackaday Prize
DIY System on Chip based on FPGA, priced below 5 USD
Project Owner Contributor