I got a shipment from Adafruit today, my NeoPixels have arrived.

I immediately set out to gauge the actual power consumption in my circuit, so I setup a strip of 10 LEDs on a breadboard, and ran a demo sketch from the Adafruit NeoPixel library. Like Stryker295 said, these things are crazy bright, even the so-called "diffuse" ones. Check it out: 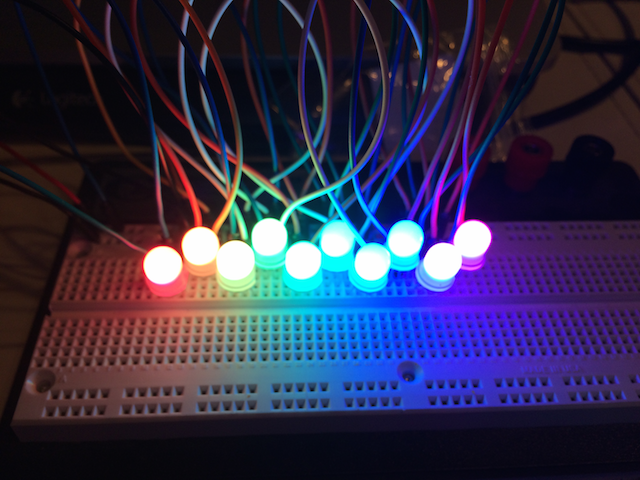 I took that picture in my dining room, with moderate lighting. The LEDs completely blew out the background lighting. I believe I can run them at half brightness, and have no problem seeing them in the settings I'd be using them.

As for power consumption, the worst case is 60mA/LED, but I found a "rule of thumb" rating in another part of the docs. They claim 20mA/LED is a good place to start, YMMV. Putting them in my circuit, and using a current meter on my USB port, 5 LEDs at the maximum brightness ran around 100mA, with 10 LEDs kicking it up to around 200mA. In my usage, it would appear the 20mA/LED is a fair estimate. With the (at least) 15 LEDs I'll be using, I should hit 300mA in the bright case, with more like 50-100mA most of the time.

I then hooked up the LiPo booster/charger to the circuit instead of the USB cable to see how the battery did with the 200mA draw. There was no change in performance of the circuit, so I think I can live with that.