As I mentioned in the "Hardware Revision 2" posting, there were some small but significant problems with that version of the schematic and PCB:

Here's a picture of the Revision 3 layout: 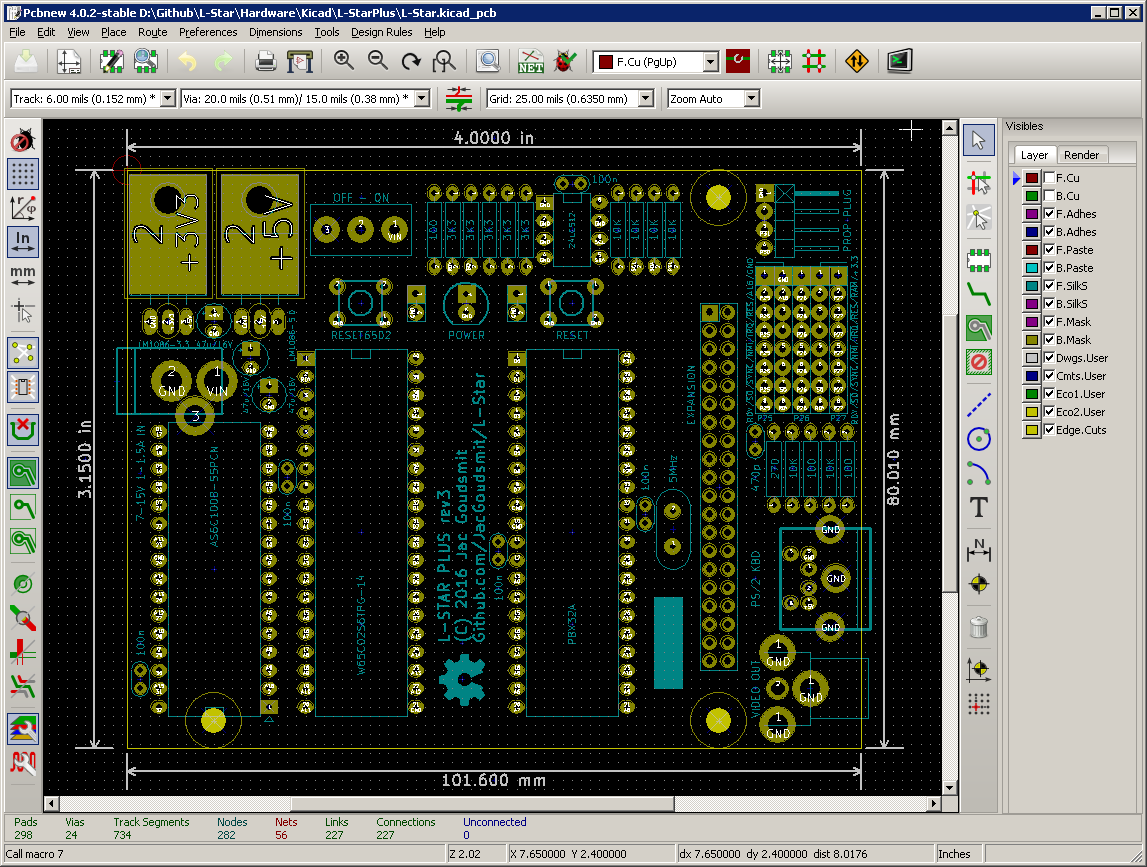 First of all, I switched the location of A16 and ~RAMEN (and the accompanying 3.3V and GND pins) so that ~RAMEN can be jumpered to P27 which is connected to KBCLK in the "default" configuration. I considered moving things around so that ~RAMEN would be the default for P27 and KBCLK would be an alternative, but I decided it would cause too much confusion so I didn't do that.

I moved the power LED to a location between the pushbutton switches, so now there should be enough space for a finger to push the button again. I also lined the pushbuttons up, close to the places where they were in revision 1. The LED is in a sort-of-odd place, so far away from the power connector and the power switch, but it's where there was enough space for the traces. I would have liked it on the right side of the board (and the power switch too) because I imagine that side will be pointing towards the user, but that's simply impossible unless I make the board a lot bigger.

I edited all the footprints on the board and made sure that they all use solder islands with a size that's big enough to solder if you have a non-professional solder iron, or if (like me) you have some old solder tin that doesn't flow as well as it used to do.

I discovered another oversight that I wanted to fix: the jumpers didn't have the ~RESET6502 signal on them. So I changed the jumper block from 7-by-5 to 8-by-5 and added the signal near the top, where it was easy to line up with the ~RES6502 pin on the expansion port connector. As it turns out, this had a fortunate side-effect: I found out that five 10-pin pin headers are cheaper than two 20-pin headers of the same series (the ones with the green plastic that I got by mistake but look really good and nicely define the color scheme of the project, along with the purple PCB and the red jumpers). This will make it easier to break/cut the jumpers to size for the final kit.

I also made the footprint of the voltage regulators a little smaller, which allowed me to reduce the board size again, and to line up the power switch with the RESET6502 pushbutton.

I haven't ordered parts or PCB's yet, because I'm considering another change: I'm thinking of putting the voltage regulators upright, and wiring them up differently so they'll be in parallel instead of in series. This will allow expansion boards to use more power on the 5V rail (the 3.3V regulator is currently fed by the 5V rail) and might reduce heat production because the current only has to go through one regulator instead of two. On the other hand, it might cause other problems like interference and the need for bigger electrolytic capacitors.

Hi, Is the revision 3 version PCB orderable? Or the kit orderable? Or is rev. 4 right around the corner? I have my old breadboard version sitting in the office. It looks cool but it would be neat to shrink it all into one of these PCBs for a clean look.

Also, do you think a small speaker could be connecter via jumper wire (like the old PC speakers) to the expansion port and triggered in 6502 ASM to create sounds?

Hi Brett! At this time (end of July 2016), nothing is orderable yet, at least not from me.

I haven't built a Revision 3 PCB to test it myself yet, but it should work in the current state that's stored in Github at
https://raw.githubusercontent.com/jacgoudsmit/L-Star/c15c1d2912c68b2ae662c43d3d3ce162654cd081/Hardware/Kicad/L-StarPlus/L-Star.kicad_pcb

As for connecting a speaker, yeah that should probably work. Probably the safest is to connect it between 3.3V and one of the Propeller pins P25, P26 or P27. And obviously write some firmware on the Propeller to let the 6502 control the speaker.