after spending a couple hours modifying microbuilder's LPC810_CodeBase to my own build structure and tweaking the makefile I compiled and successfully ran the basic blinky program along with it's little serial output on the cute little LPC810M021FN8 (aka LPC810) chip in DIP-8, which have 4kB flash, 1kB sram, 2 USART (yes, that's right 2 USARTS in a DIP-8 chip!), a I2C, SPI, and a comparator. These chips have something called a "Switch Matrix" that allows you to map the peripherals to whichever pins you want, which is very useful with such a low pin count package. My lpc810 code folder here.

here's a photo (as you may have noticed my photos are much clearer now, due to a better camera): 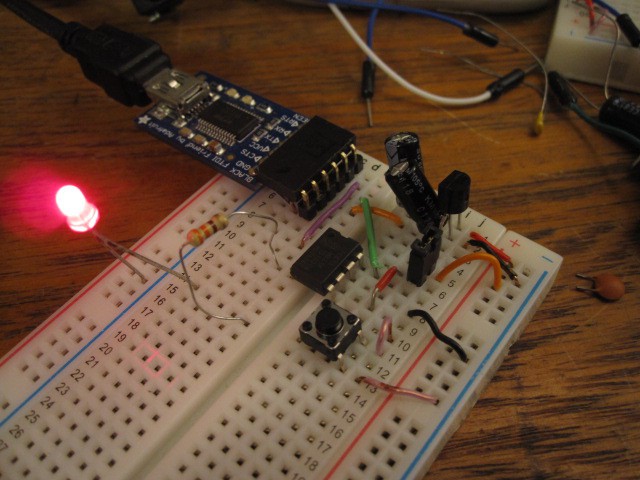 I in my past digikey order when I ordered the LPC810's, I decided to get some LPC812M101JD20 chips (I'll just call them LPC812 for short) which come in a SOIC-20 package and have a much beefier 16kB flash, 4kB sram, 2 USART, 1 I2C, 1 SPI, and a comparator. For these I decided to copy sebseb7's lpc8xx template and alter it to my liking. This "altering" ended up spanning close to two days (not consistent working) due to trying to make the provided Makefile work with the structure I wanted, which was to have a project in it's own directory and use the libraries from a different directory lower than it, but I was unsuccessful. In the end, after reading the GNU Make manual for a while, I just re-wrote most of the Makefile and got things working.

As for the Hardware, the LPC812 chips are still resting in their anti-static bag waiting to be soldered to a SOIC-20 to DIP-20 breakout board some time in the future, but at least I'll have a functional build system to create code for them.

My base folder for other LPC800 series development: here

I am currently designing a BOB for the LPC812M101JTB16 processor. This might interest you :