Postal/kitchen scale (it does double duty) repair on the (fairly) cheap, with no documentation whatsoever...

Here, let me tell you the Saga Of The Scale...

*ahem* It was a dark and stormy night...

*ahem* Once upon a time, some years ago, Mom got a postal meter system from Pitney Bowes. It was okay. Not great, not terrible, just okay. Eventually we had to get rid of it for various reasons, but we kept the scale that came Free! with the meter system and priced-like-distilled-unicorn-blood ink. The scale was branded as a Pitney Bowes model G799. It worked great... until one day when it didn't...

For a while it wouldn't register weight properly, and thought that a couple pounds was a mere tenth of an ounce or so... then it just outright wouldn't turn on properly.

Keep in mind, throughout this adventure, that my troubleshooting skills are somewhere between sadly pathetic and "What's a troubleshooting, Mommy?" -- so forgive all my mistakes, please...

After some significant experimentation centered around a white wire that went nowhere (spoiler alert: complete and utter red herring! I suspect there was going to be a feature implemented with that wire that never was actually put into production...) I couldn't make it work and gave up.

Then I bought another G799, courtesy of fleaBay and a particularly seasick rendition of Andrew Jackson ;) and it arrived with the same exact issue. See, when the scale is turned on (with a button on the side, it's a "soft" power-on), it flashes every segment on the display for a second or so, then dashes for the weight, then zeros for ounces and tenths thereof. Neither scale would zero, it would freeze at the dashes. 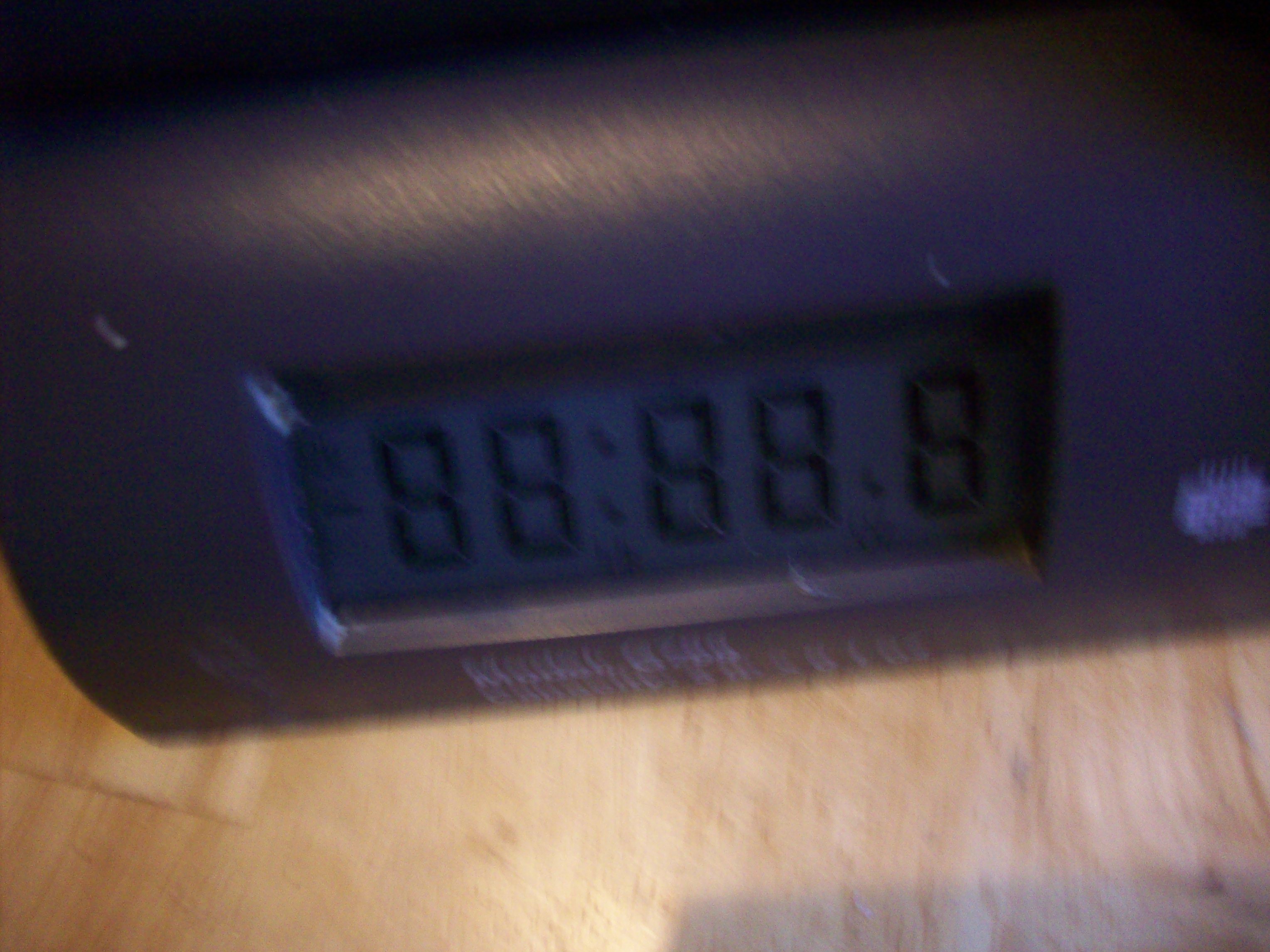 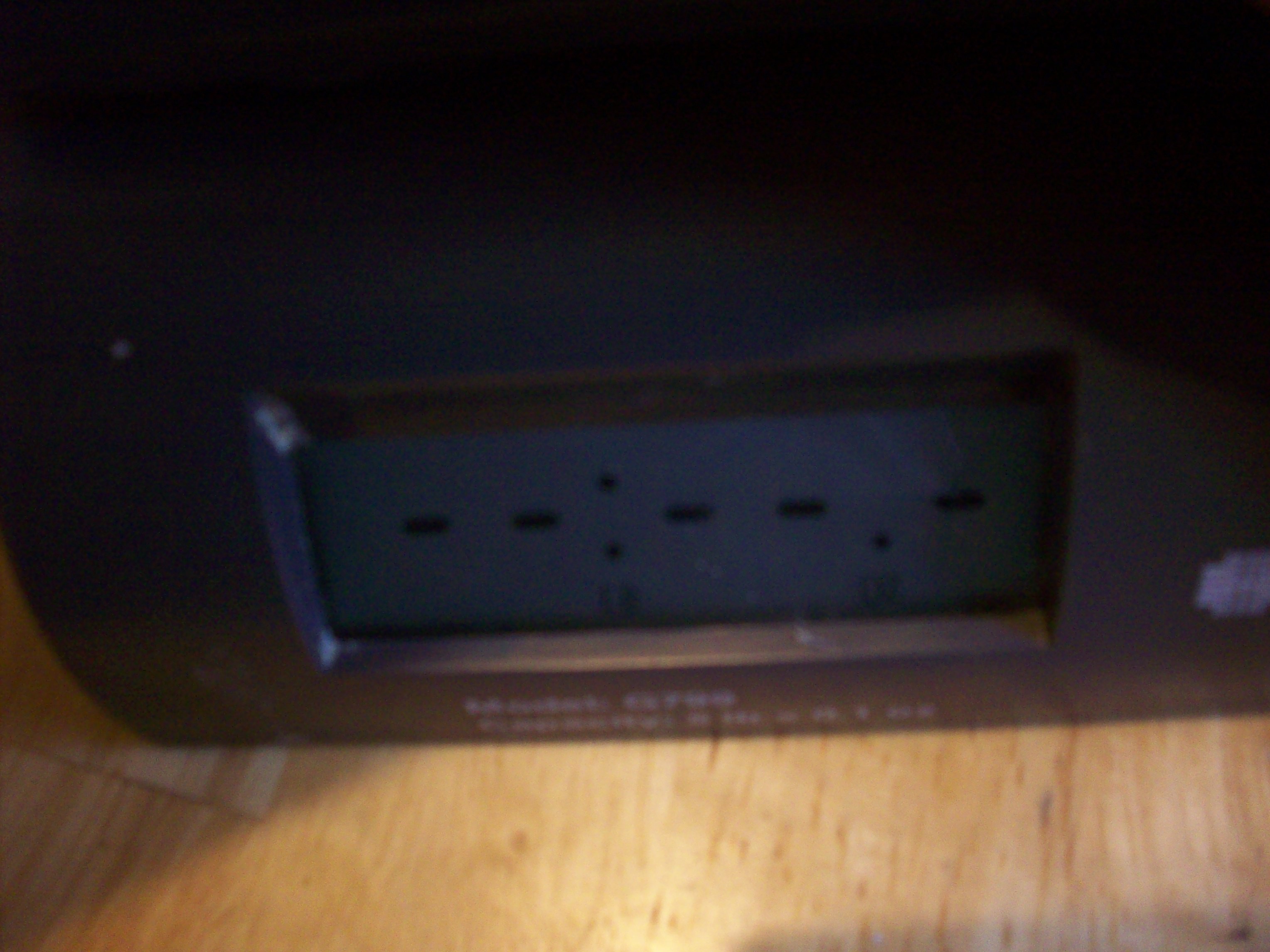 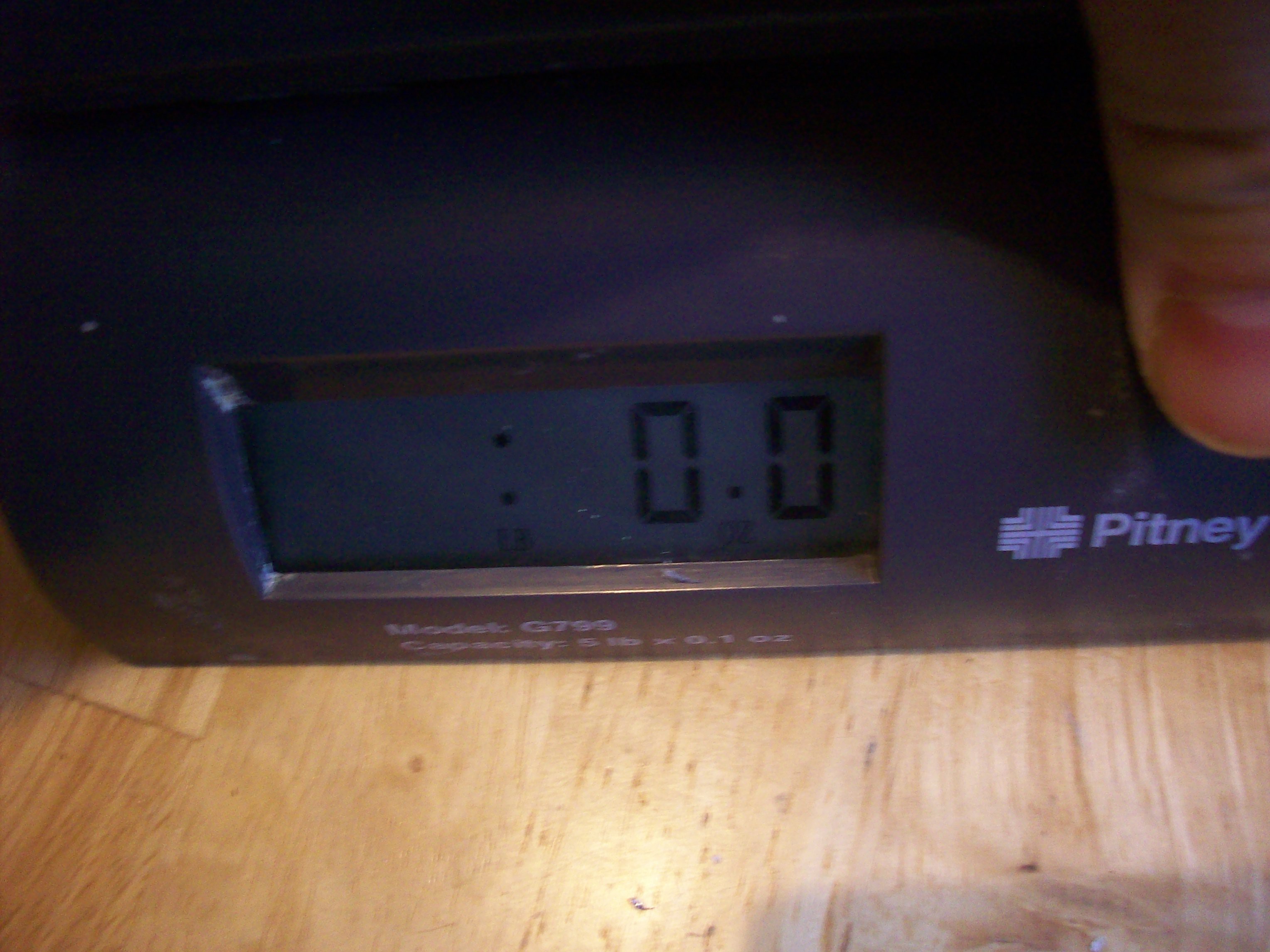 So I sit and I think, okay, what exactly can break in a scale like this, during shipping? I'd had both apart, and I knew that it was not a circuit failure. There were exactly two even partially mechanical parts -- the load cell (which does the actual weighing, and is based on a Wheatstone bridge... tl;dr it's basically a high-precision force-sensitive resistor) and the power switch.

The original power switch for these scales, is a single button membrane keypad, with a steel dome inside and a rubber (ish) cover outside, held in place with Dave Jones' favorite (not!) -- hotsnot aka hot-melt glue. I used an X-Acto to peel off the rubber and switch, and to pry off the hotsnot. I then wired in a PC power switch (!) that I had lying around, momentary pushbutton type -- not really a tact switch, just a pushbutton meant to have a cap but without one. Suddenly the scale worked... and, futzing with the original switch, I soon figured out why. Look at this thing -- 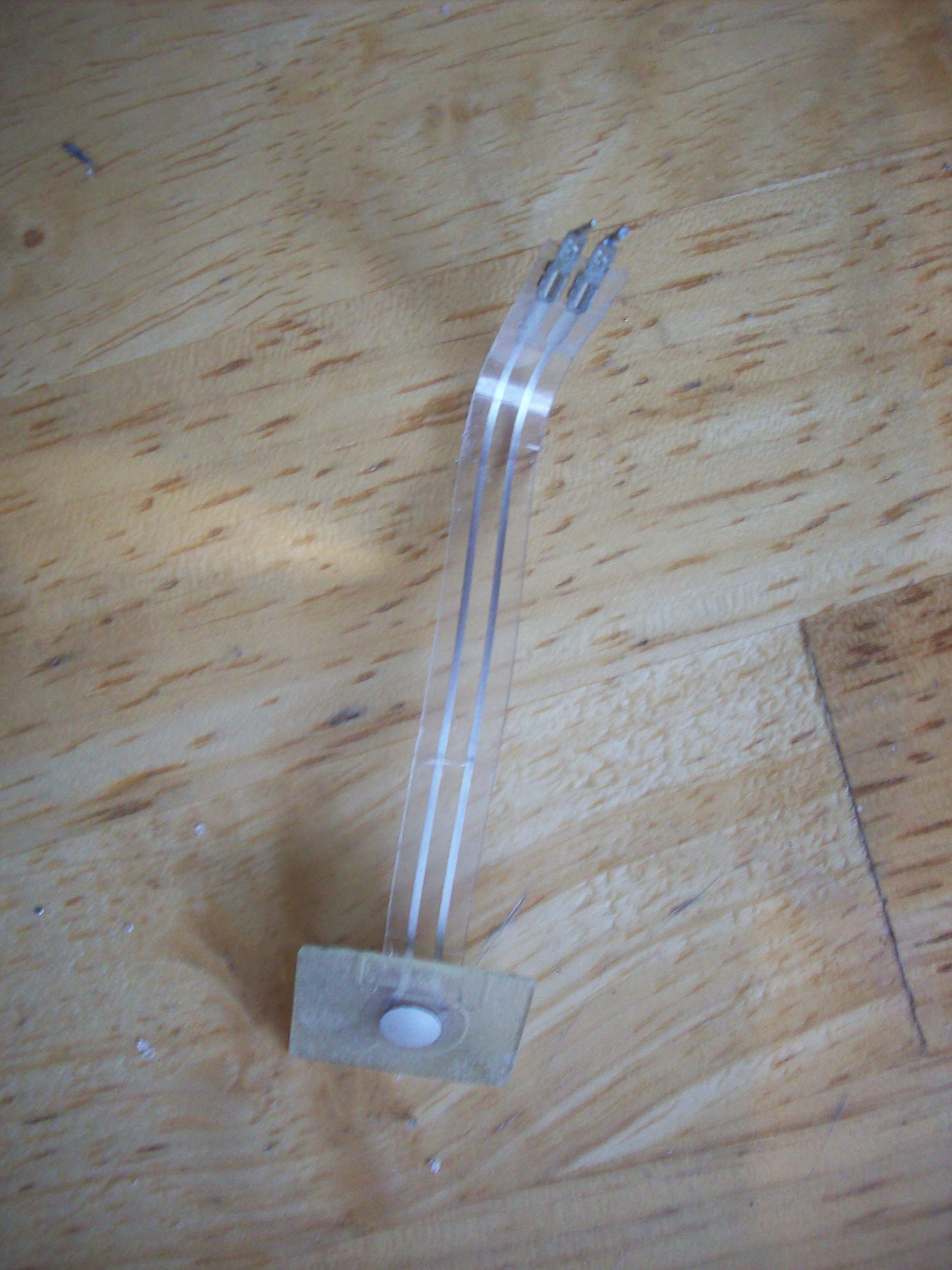 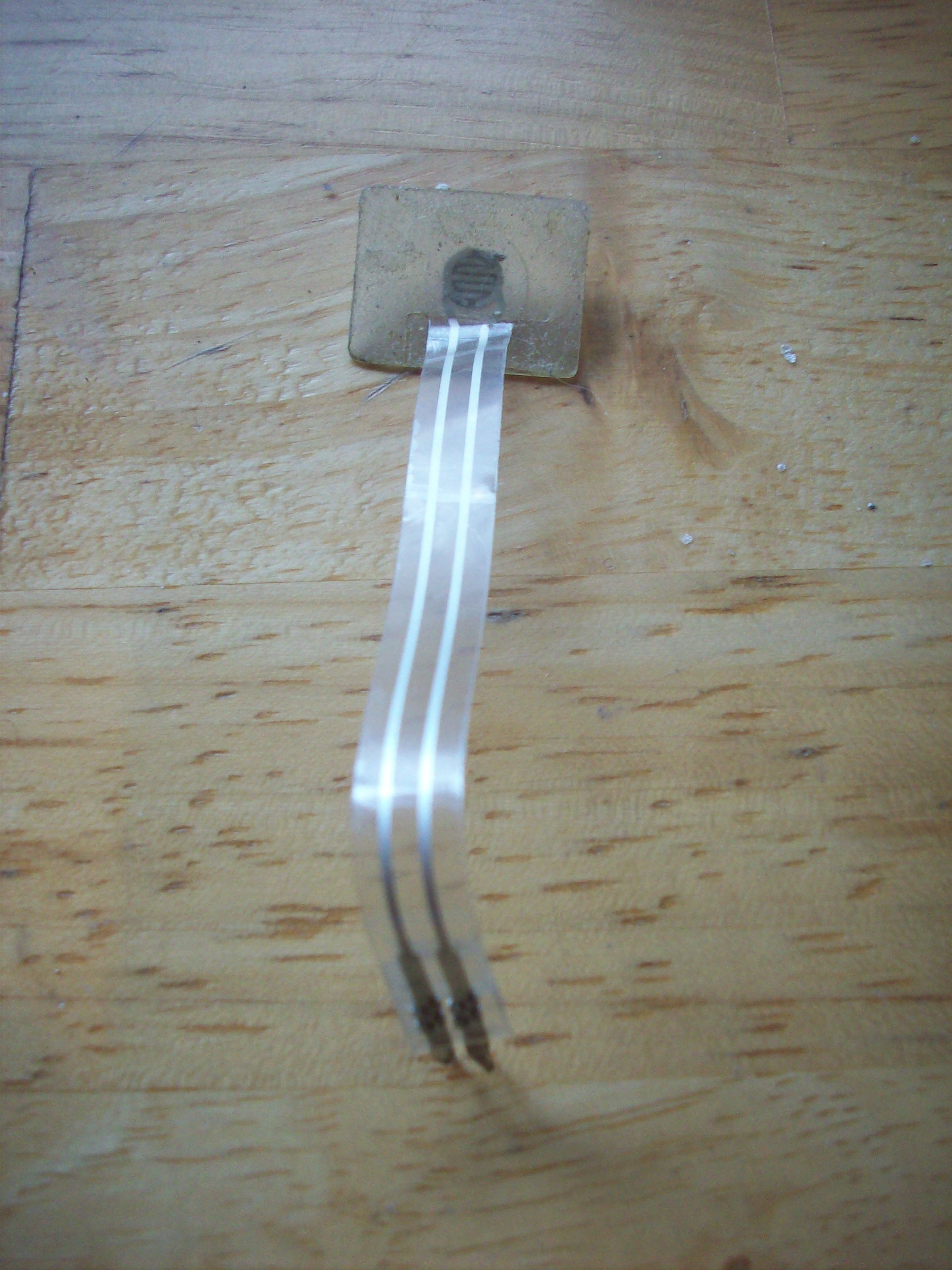 To quote Luke Skywalker: "What a piece of junk!" Boy, not a tenth of a penny to waste, ha! That little piece of flotsam would pop in (closed circuit), but not back out (open circuit) and was preventing the scale from working properly.

I replaced it permanently with a Radio Shack switch that I had on hand. If you have this scale, RUN DO NOT WALK to your nearest electronics supply house of choice and get yourself a replacement switch and put it in. It's really not hard, and it will save your scale! Here, have some pictures... 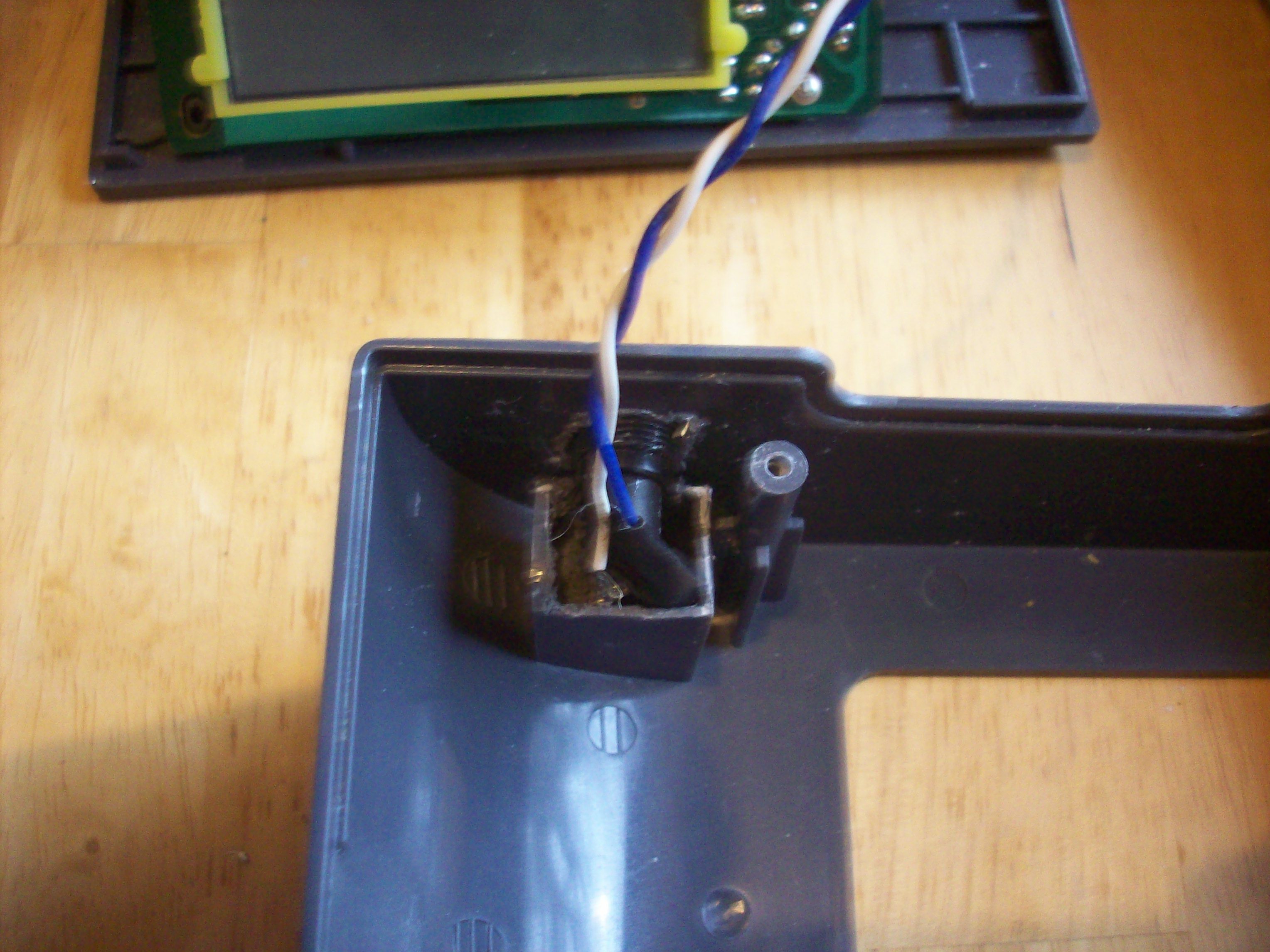 I hope, by now, you can tell how much I like it when accountants play engineer with the stuff I buy. THIS RIGHT HERE is the reason that cheap crap floods the market for people to buy, swear at, and throw out. Money money money. Do NOT blame the sticker that says Made In China. I have seen some truly awful stuff that bragged about being made right here in Murrika. That didn't help it any, trust me. The problem has nothing whatsoever to do with where or who or what made what you buy at the local Mal*Mart or Borked Buy or [insert other horrible store bilking poorly designed and made crap here] -- the people in charge of whether your stuff is made properly, or with Victorian tolerances in the primate cage at the Beijing Zoo -- those people are the people who *designed* the product in the first place. The workers ain't got nothin' to do with it, and they never did. Don't hit the workers, they're doing the best they can to get an honest living and keep all their digits attached, /capice/?

Replacing the switch... that's not the end of the tale, though... although the scale would still turn on, it still had its weight problem... it couldn't detect things right. It was still mistaking pounds for tenths of an ounce.

Now, there's two circuit boards in each scale... I call them the Analog Board and the LCD Board. The Analog Board has on it a pair of chips (a comparator and an op amp) and a fat pile of passives. The LCD Board is all digital, with the display (hence the name), a ROM chip (it's a serial, the 8pin DIP in one of the pics below) and a microcontroller (epoxy blob UNDER the LCD -- what were they thinking? *WERE* they thinking...? Ugh...) along with another bunch of passives. Here, have some pics. 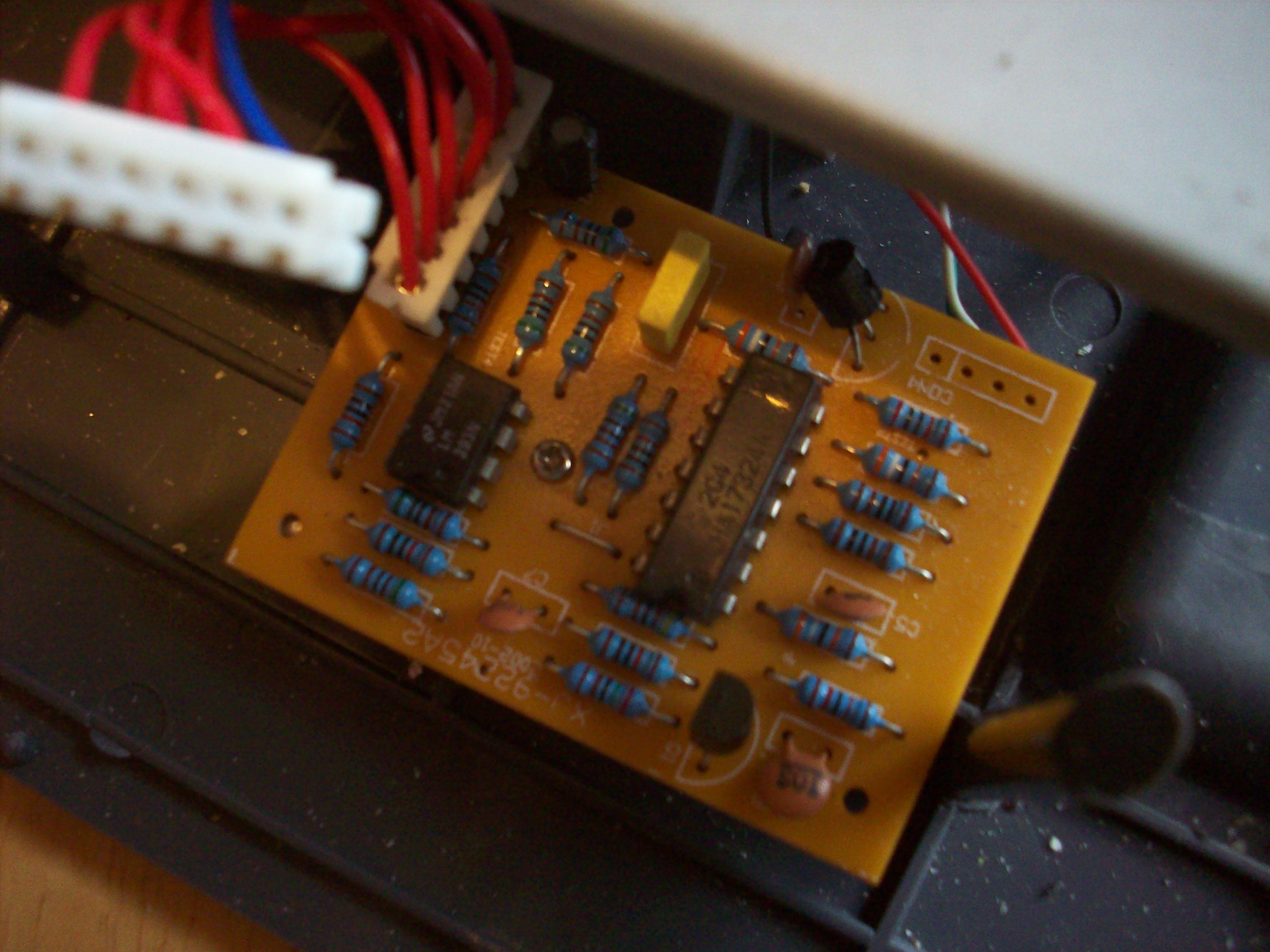 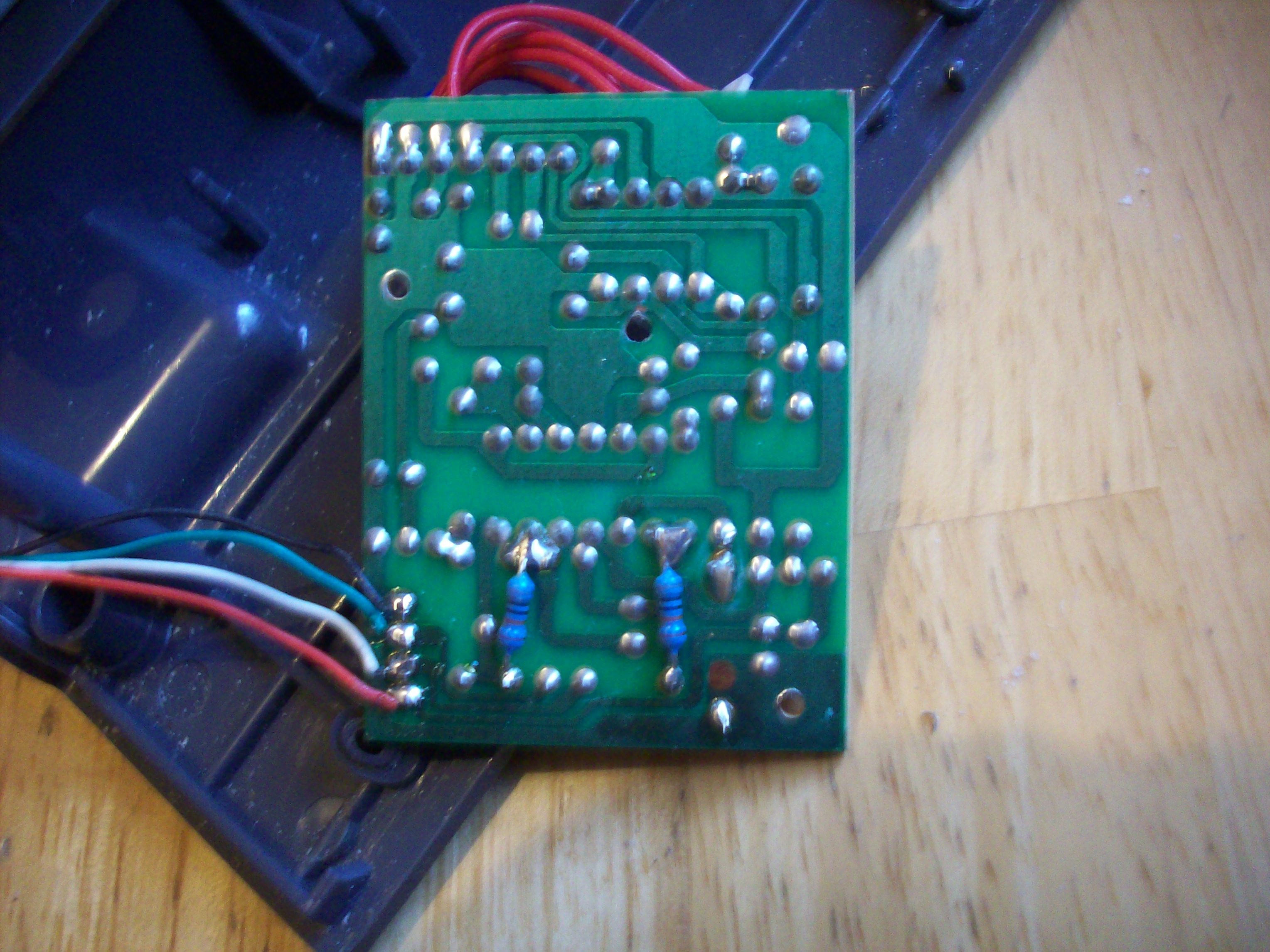 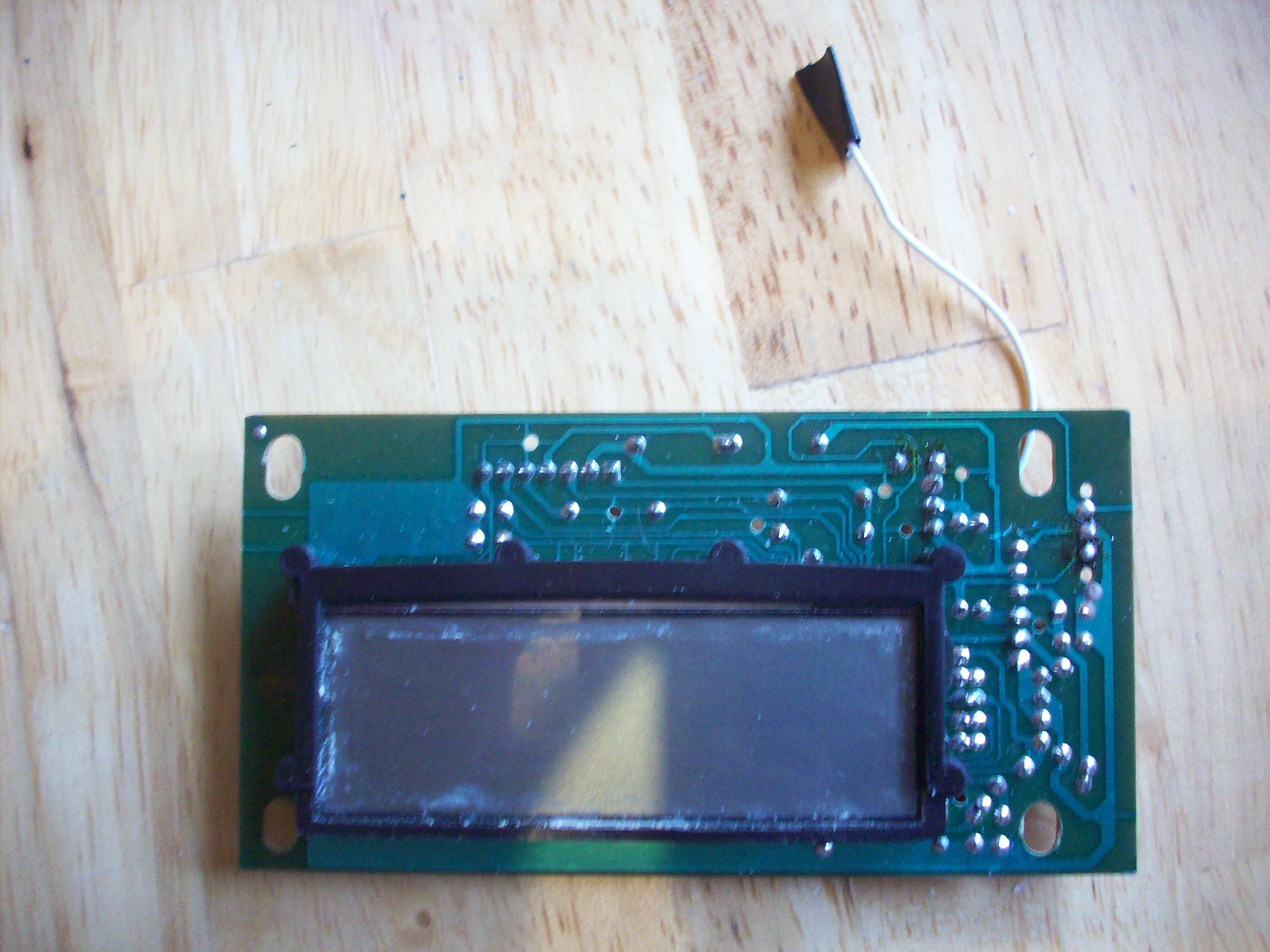 (I do not have a picture of the back; it's identical -- or very close to identical -- to the "new scale" version, with the exception of the color of the LCD frame.) 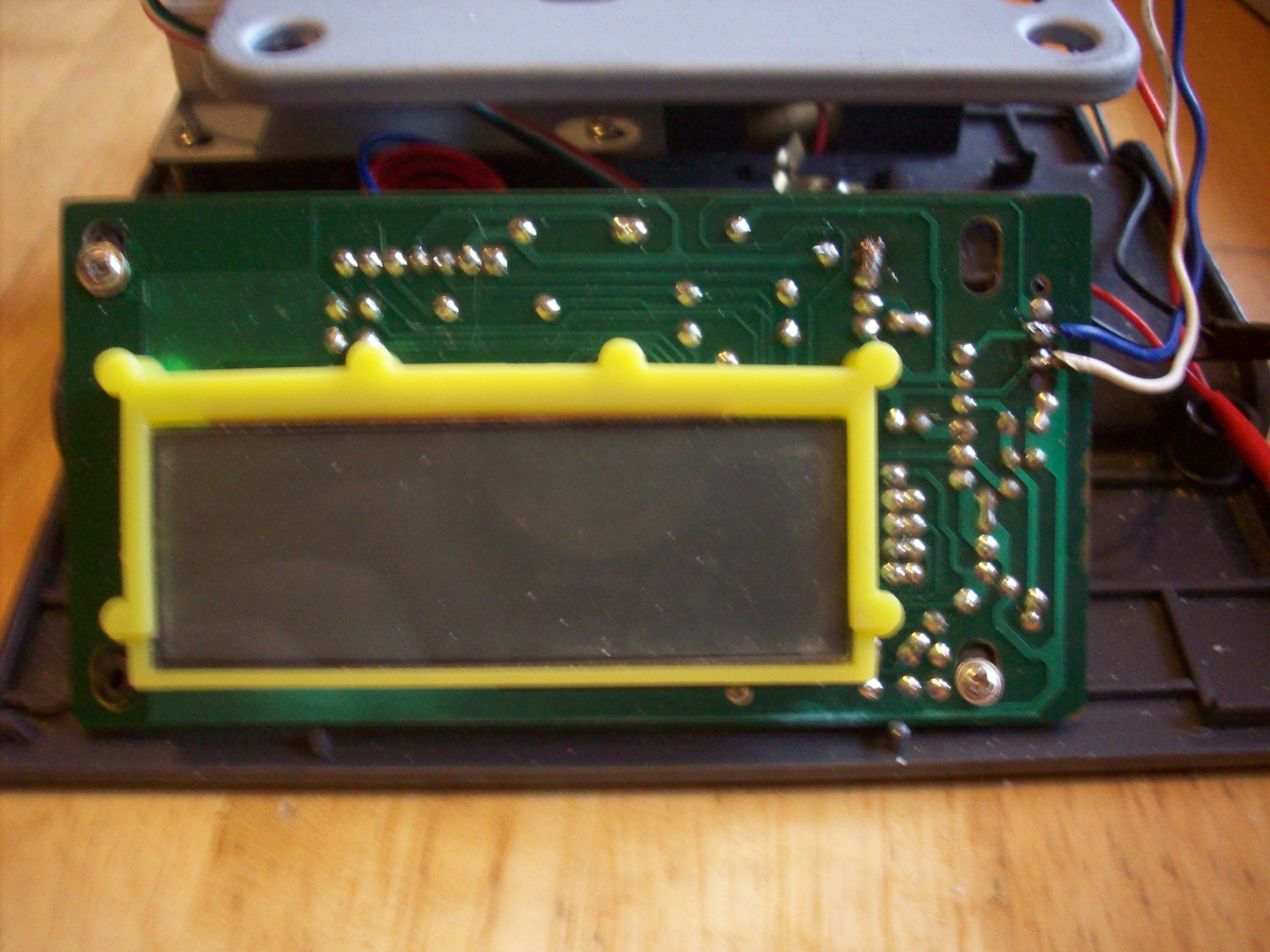 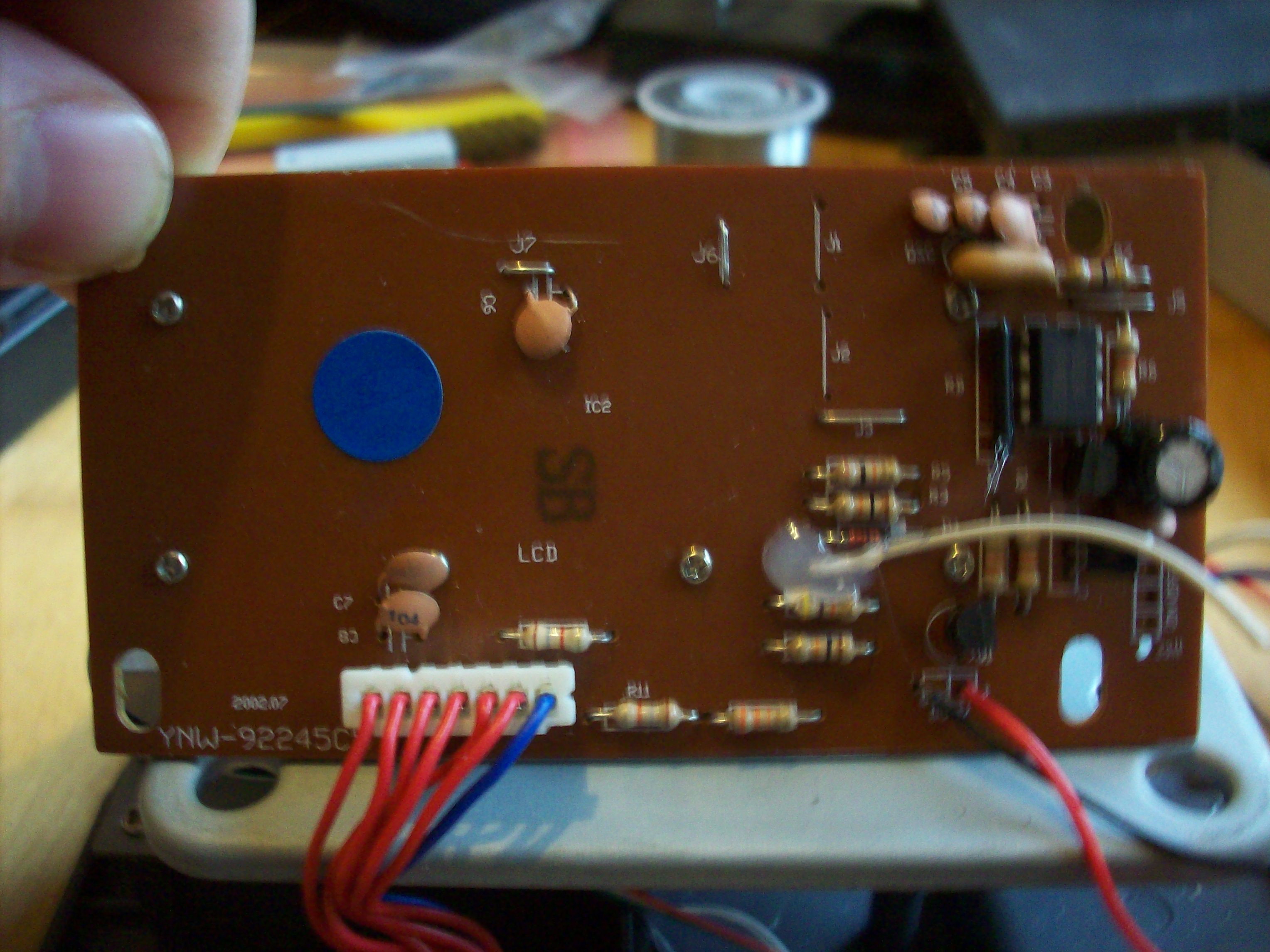 You can see, on the "new scale" LCD board, some cables. The blue and white wires on the screen side, go to the power button. The red and black wires on the back, go to the 9v battery snap (which I also replaced, twice actually, after wearing it out both times). The white wire is known as The Wire To Nowhere ;) and the cable with the white connector and blue and red wires goes between the two boards.

Note that I didn't do any snooping to see how this thing actually conveys information through that last cable... if anyone else has done that (yeah, right!) I'd be interested to hear, but I don't have a Bus Pirate (or the money to get one) so it's not happening in my house...

After much more mucking around, I found that the LCD Board on the old scale was about ready for retirement. So I indulged it, saw that it seemed to work (spoiler alert: "seemed to work" is the key phrase there...) and called it a finished project.

Mom says to me, a couple weeks later, hey this scale is mondo off. Like, a half-liter bottle of water registers multiple ounces heavier than it should.

So at this point I figure maybe the load cell's gone off and been used half to death and it's trying to tell me something. Cracking it open, I happen look at the two load cells (one in each scale) and I set that first idea aside, in lieu of a second. Seems that these are standard-issue four-wire load cells. Wires are black, red, green, and white.

In the old scale, the order is black-green-white-red. The new scale, though, has 'em as black-white-green-red.

So I swap the green and white wires on the old load cell. I'd actually redone those joints some time ago (at this point) so it's possible I guess that I'd swapped 'em myself.

Back to the drawing board. Let's swap load cells, maybe that'll fix it.

It's at this point that I find out that the load cell on the new scale has had a bit too much to do, or got punch-drunk on its way to me, courtesy of USPS and typically poor eBay shipping skills, and so it keeps the thing from zeroing.

So, last desperate measure, I swap the Analog Boards, so that I've got the old load cell, the new Analog Board, and the new LCD Board all strung together, along with the Radio Shack switch (which, by now, had fallen off and been reattached to the LCD board about three times...).

If you're expecting this to not work yet again, I've got bad news for you -- that's exactly what fixed it. Something had fallen way out of tolerance on the old scale's Analog Board and screwed everything up big time.

So that's the story, folks. That's exactly how I did it.

Here endeth the Saga Of The Scale.