Replacing the processor in a Novation Launchpad to make it work - and better than the original!

I was bidding on that auction site again, and came across a Novation Launchpad. Owner said that he'd had a bit of an accident with power supplies and it had fried all of his stuff, so he was selling it dead.

Well I was delighted to win the auction for the Launchpad for not very many pennies, and when it arrived, all other projects went on hold for a while. I found that it was mostly alive except for the CPU, which had decided to depart this life. So what do you do?

Hack in an AVR instead! Protoyped with a Leonardo, and then embedded a Chinese tiny version inside - coded up to pretend to be a real Launchpad - only better !

So, I desoldered the CPU from the board, and wired in an Arduino Leonardo - since it was what I have lying around. The eventual target is a 32u4 micro board from my Chinese friends, when it comes.

The Leonardo happens also to have embedded USB, and there is a lovely lump of hack for the Arduino core called arcore, which happens to implement a simple USB MIDI interface. I found the programmers' guide to the Launchpad, so I could code up what was expected inbound and outbound, and a few days later (well, I have to do work as well, c'mon now) I have a reasonable emulation of a Launchpad. The refresh rate is now 70Hz even though I have implemented the three shades of green and red by PWM. I have a legitimate copy of Renoise for Linux (and Mac), and I wanted to use the Duplex mapper, which has lots of built in maps for Launchpad, but they do use all of the shades of colours.

It also has the benefit of a much faster MIDI implementation than the original - though maybe no faster than a Launchpad S, which uses a newer engine. Anyhow, I don't seem to need double buffering or anything like that to make the update performance OK .. it updates the entire button array in one refresh time, so as far as the user is concerned, it's instant.

The designers of the Launchpad thoughtfully left some diamond-shaped pads to make it easy to solder to .. 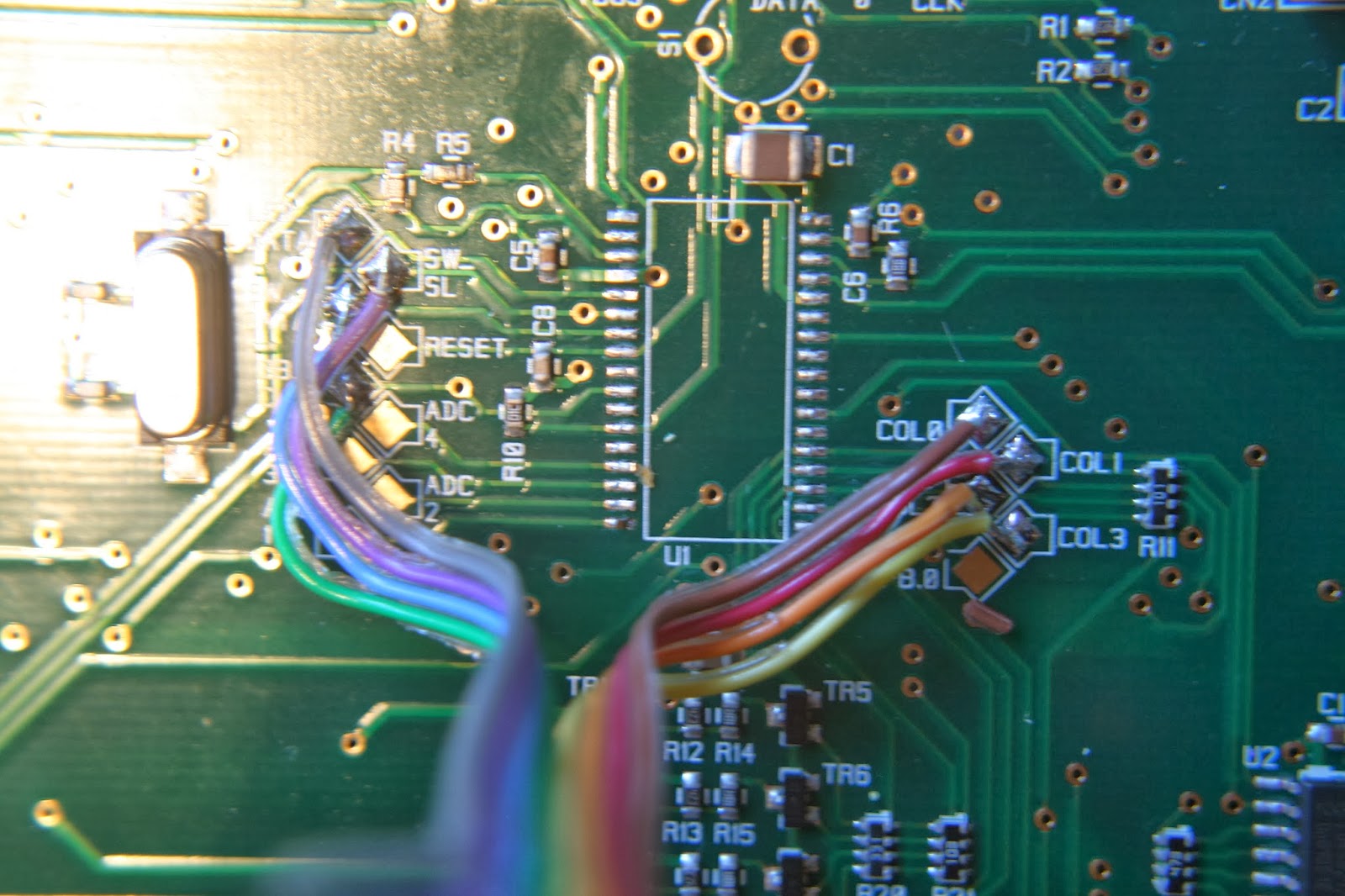 This made it easy to wire in the 'Pro Micro' Leonardo board .. I had to change the arduino code a bit, since the ports don't quite line up with the Leonardo, but the arcore extension loaded fine, Renoise spotted I had added a USB MIDI device .. 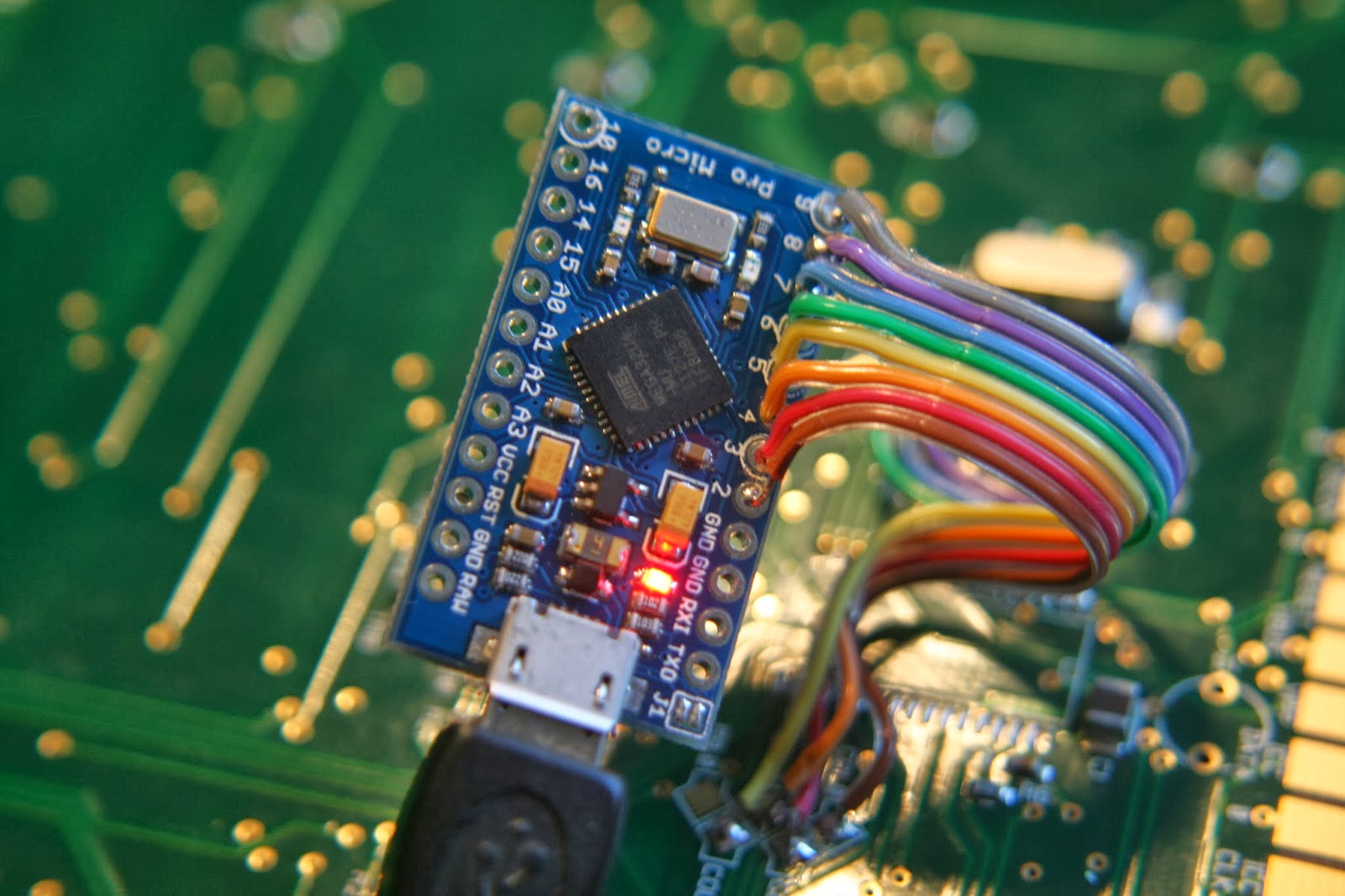 Time to stick the tiny board onto a couple of sponge pads, and wire in a short micro USB cable to the existing USB connector on the Launchpad - that way, the 5v serves the existing logic on the motherboard, and powers the micro board as well. It also means I can avoid trying to solder anything onto the micro USB connector which are too damnably small to see. Even with the surgical loupes.

This idea is looking very useful and I think you can check some information about it here on Bidvaluable auctions where you can bid for the products.

some schematic or source code Please.

Hey, how did you figure out how to communicate with the launchpad circuits? I did something similar although yours looks much nicer :) My source code is on github (search for charonme/penelope)

jouni wrote 09/23/2014 at 06:23 • point
Great project. I would like to hack my launchpad to get MIDI out without computers. Could you post the source somewhere or private email to me (joouni@gmail.com)? It would help a lot.