"Holy balls, does that ever look awesome."

Alright, so it's not exactly a *binary* clock, but @Benchoff's project does look awesome...

It might be darn-near plausible, if not probable, to accomplish this sorta look with the system driving this LCD-binary-clock...

Again, it's absurd, maybe, to use something like an LCD with such high-resolution potential for something that could be done with LEDs designed for the job... but therein lies a challenge that appeals, a bit... Not only does it look cool because it's colorful, but also because it has that very clear 7-segment feel *while* being colorful; the angled edges, whatnot... I dig it. (Also, I kinda dig the brighter glow in the middle of the segments, but that's not realistic with this system).

Well, first... masking,... that'd take care of some of it. But with the huge square pixels used in *this* system, as-configured, I don't think it'd be able to handle the angles of a seven-segger where three segments meet.

This is *VERY* quick and rough... But maybe the idea can be gotten from this:

("Mask" generated via Gimp from an image at the link, above. @Benchoff, hope you don't mind!). 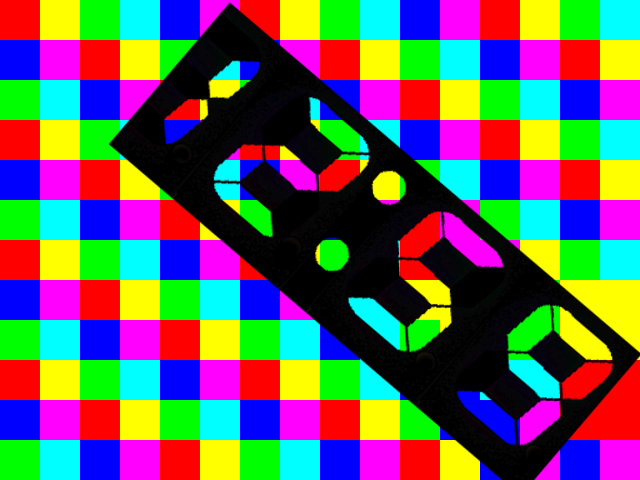 Some work, obviously, would have to be done to align things better (I really only focussed on the '9'). Don't forget that 7-seggers generally have a *slant* toward the upper-right, slightly italic. Apparently that's quite a bit more complicated to work into square-pixels. Also, note the verticals are shorter than the horizontals... Another consideration, which makes square lighting a bit more difficult...

And, some vague idea that the mask would be intentionally movable, so that it just looks like a random color-pattern except when the mask is positioned properly...? (I guess there'd have to be lots of black pixels in that pattern)

Some finagling could be done, as well, with changing the number of pixels in either direction (within reason, there's only 512B of RAM!)... even, possibly changing the heights of *certain* rows... (And then, of course, there's always the possibility of the "row-seg buffer"... which could pretty much handle all this, with a bit of work... Maybe it could be used with roughly-random polygons and a movable-mask... intriguing)

Key Concept: There's absolutely no reason whatsoever why the pixels have to be square... Nor even consistent in height (though, width is quite a bit harder to mess-width, *especially* if not in columns). 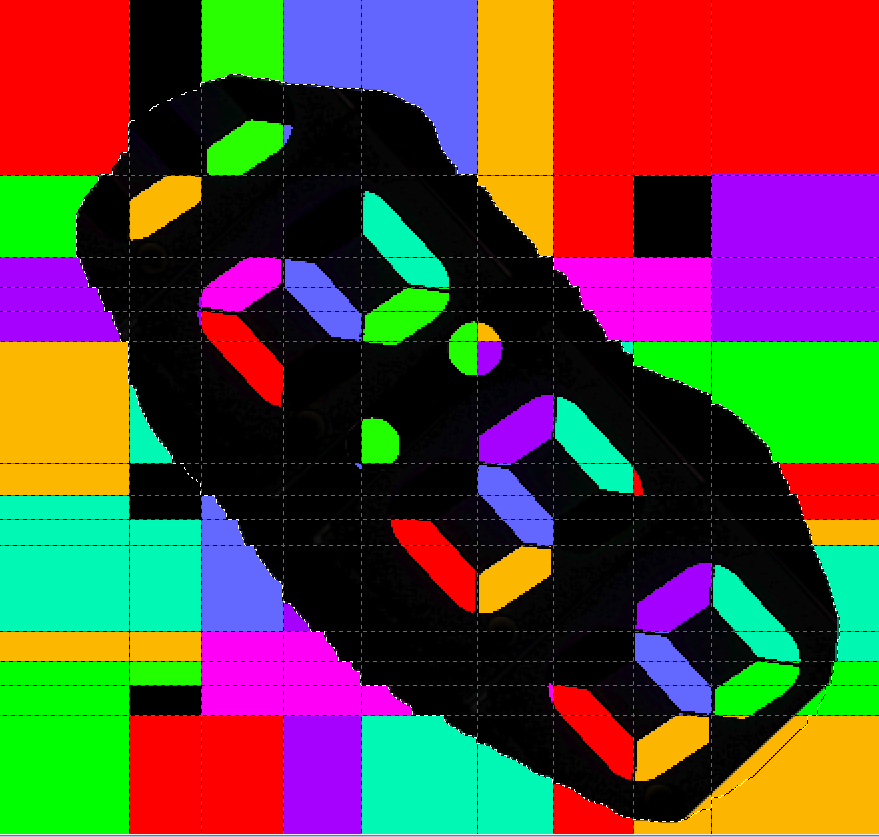 (The gridlines show the potential shapes of the pixels on the screen, they obviously vary dramatically, mostly in height. Width is harder to vary, as it's generally handled by Assembly-instructions for the fastest possible refresh-rate. But there're ways to tweak it a little bit, if necessary.

I think it's *just under* 16 pixels in *both* directions, so, no memory problems, even with a full frame-buffer :)

Below is what it could look like without the mask: 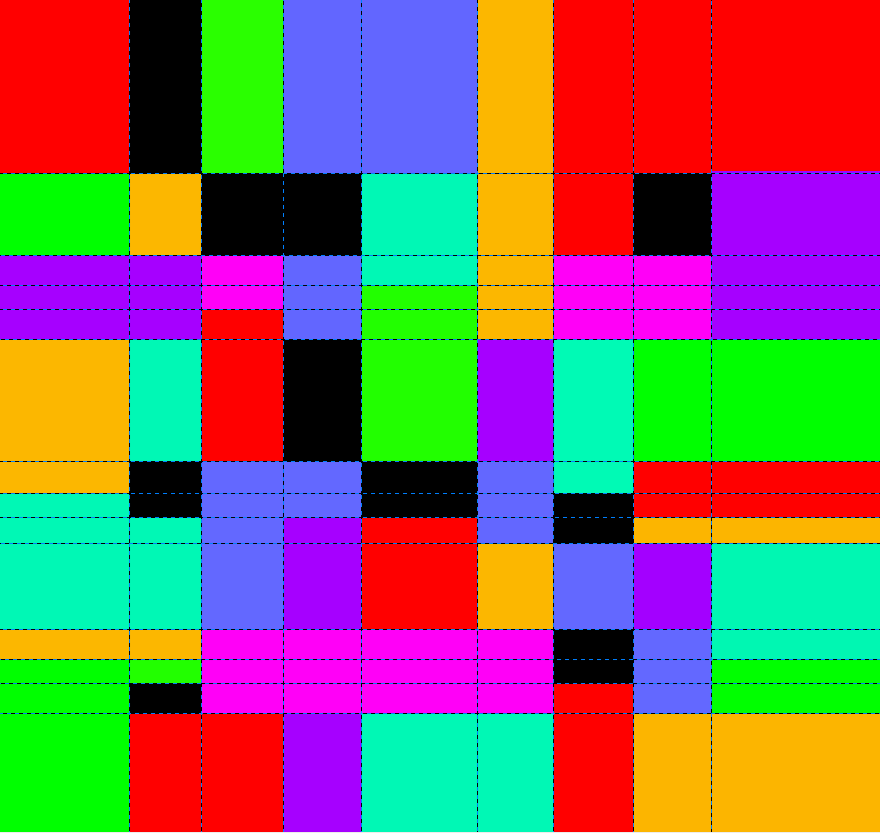 These are the *relevent* pixels... 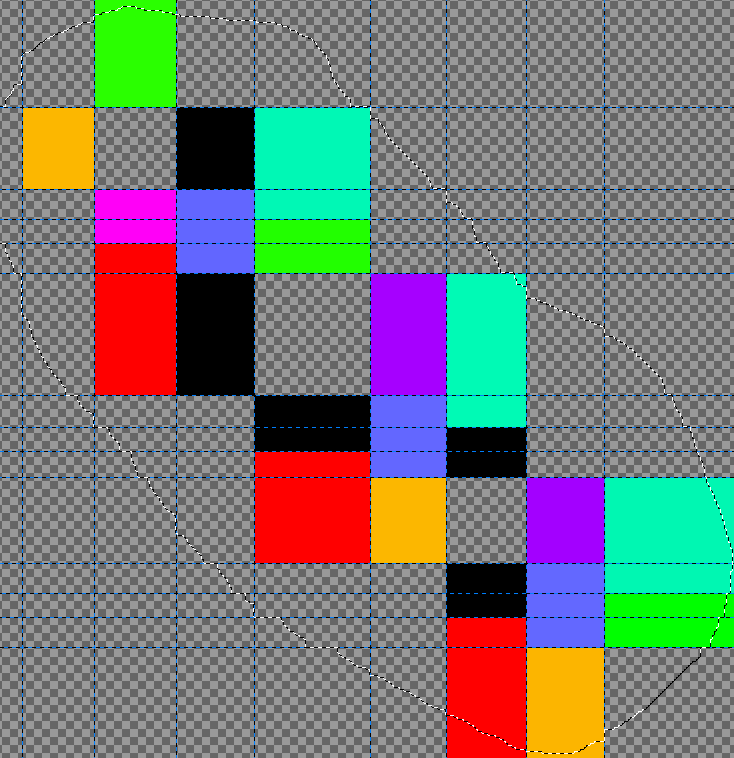 Anyways, it's more a mental-challenge than anything else... opening up new ideas for how to make use of/improve this circuitry/software.

I've tried to draw the mask on 5mm square lined paper and it looks good, too - so I don't think you have to use special sized pixels for each digit part. Looking forward to your results :)

Did you notice how I've ignored the part where you said you wouldn't do it?

Nice-fit on that! It does indeed look fine at 10x10. It's kinda funny to think that 7-seg displays are nothing more than 7 squares with the corners cut off.

And, I think you ignored that part because YOU're gonna make it :)

ooh, adding black rows here and there would be easy... have a bit of a "blinds" effect, but that could certainly help the rotated-rectangle-on-a-squre-grid issue... by... essentially... widening the gap between segments (which could be accomplished by a... wider gap between segments *in the mask*. Right.)