So here several months after my initial project creation, I've actually made some small but measurable progress in the (networking) hardware prerequisites for the system setup, namely I have a basic (albeit not permanent) server solution, a 16 Port TRENDnet Managed Gigabit Switch, and cat6e run throughout my house now; I have tried to keep the current solutions scalable to allow for incremental expansion to reach the projected system, (all except the server, which will need to be completely replaced with different hardware.)

As Mentioned above, the current server is the only piece that, as of yet, will come to not much use by the end (other than maybe stealing the ethernet controllers it has inside, before depositing the rest back into the closet of lost computers). What it does provide currently is a place holder for the network arrangement consideration, a trial and error environment for testing out different software, and a few of the more basic services. Like the projected machine, the current server is running Slackware 14.1 x86_64, has an extra network file system partition share (just as a basic shared directory for the LAN), SSH, and LAMP Server Software (Apache, MySQL, PHP).

The similarities with the final server end there. The machine itself has an AMD Athalon 64 3200+ (single core) processor and 2Gb of DDR-400, on an otherwise uninspired motherboard, 2 PCIe Gigabit Network Cards, and an 80GB SATA HDD . I won't run down this server too much as it is more than enough machine for a wide range of practical applications, but overall it is still lacking in terms of not having AMD-V (for network boot VMs), and ultimately is limited on hardware resources, making it insufficient for the full array of desired services. Until recently, this server was part of my stand in gigabit router, used in conjunction with a small gigabit switch, and functioning as the DHCP server, but while it is a reasonable enough "knock around" box, it will never be the end product (maybe it will still get a home somewhere in the final system, only time can tell.)

Since the project happens in incremental segments, the network arrangement has to scale with the project to avoid adding unnecessary complexity before there is a need for it. The initial network setup was admittedly more complex than it is now since rewiring the house (as some of the previous configuration was a result of making due with available equipment at the time.) On the other hand the current configuration is still not perfected and will need some more work before it's truly in keeping with the multi faceted network that is required to get the most out of my home server solution. There is certainly an ongoing consideration in my mind on the best arrangement, ideally I strive for as much simplicity as possible so as to keep server configuration from getting too unwieldy and tedious and avoiding making a full time task of my at home network administration (I can just imagine getting trouble tickets from my roommates....)

The long and short of the old setup was that I didn't have a gigabit router, just a couple of gigabit switches, and a nicer Netgear that despite supporting 802.11n only had 10/100 ports (which doesn't quite cut it when you're paying for a 300 Mbps Internet connection.) My modem itself, while having 4 gigabit ports, had the routing feature disabled and while I could have gone through the trouble of resetting the modem to default simple enough, I chose to use the interim server as a stand in for the router so I could toy with some different softwares for the eventual server and also have it available as a local development and shared network directory solution (plus, making your own router with spare parts and a switch is much more satisfying.) Ultimately the network was split into 2 domains, the first originating from the interim server and spanning through the two gigabit switches, the other from the 10/100 Netgear router which was plugged into the 2nd switch (an awful choice in that it was subdividing an already divided signal) which was used primarily for WiFi purposes, although, as the domains were never bridged, anyone on wireless couldn't reach the slack server. One might guess it was never intended for the long term. 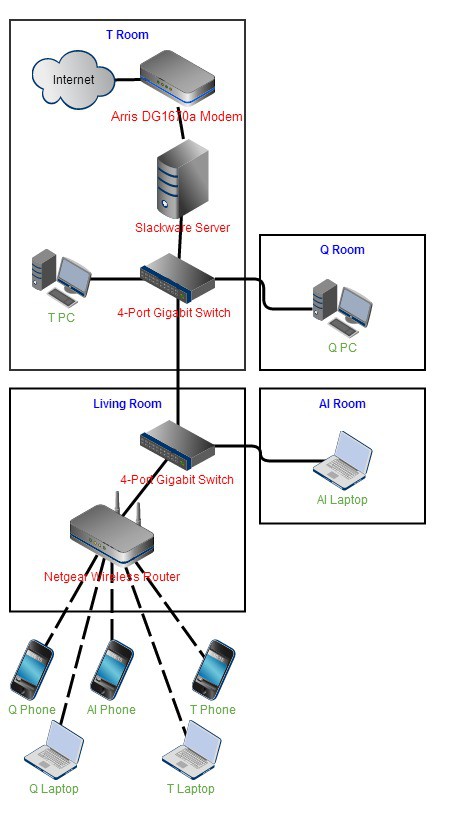 diagram of initial setup (above)

The current setup is more in line with what you would expect out of a traditional home network, but until I do some reconfiguring my server is out of the loop (making it not much of a server at all) and the switches are at the ends of the line. With the current setup I re-enabled the routing feature on the modem and ran Ethernet cords to wall plates in each room, placed the switches on two of the room ports, and plugged the Netgear directly to the modem to maintain the separated wireless traffic (and save me from having to reconfigure half a billion wireless devices.) This while reasonable enough for networking purposes, represents a job still only partially done. 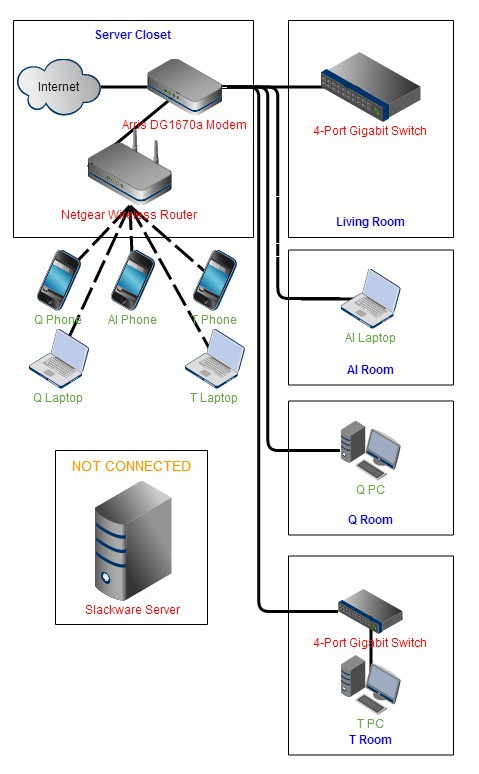 diagram of current setup (above)

The obvious next step to this will of course be to get the server back into play (at least until it's replaced with new hardware), to make the implementation better and make the solution more readily scalable however, I recently acquired a 16-port TRENDnet Gigabit Web Smart Switch. I have unfortunately not had the time to fully play with it yet, but the ability to implement virtual networks with specific ports, should make it easier to implement a separate LAN domain which operates through a proxy (Tor more than likely) as a means of providing enhanced privacy. Of course that's only one of many benefits, the 16 10/100/1000 ports by themselves are great for when I start pulling more ports into the rooms and start adding on other devices like IP cameras and the such. For now though just getting the server back into the mix, re-purposing it from primarily acting as a DHCP server and maybe configuring it as a firewall is kinda my aim. 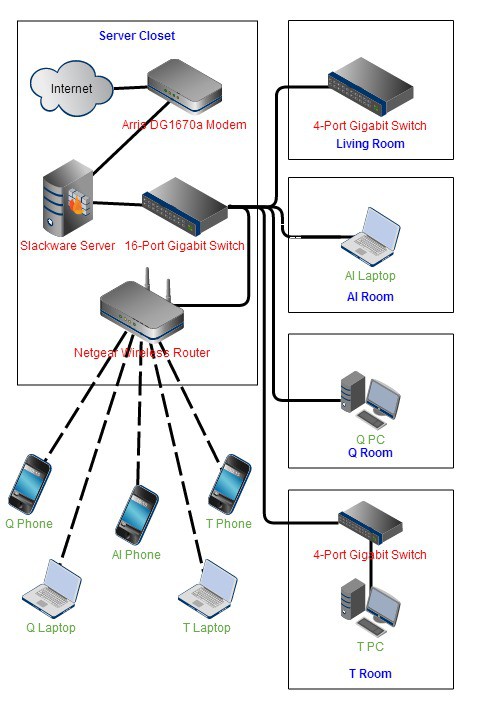 diagram of planned changes (above)

For now this initial leap gets the project going in the right direction, I know it may yet be a while before the full solution is recognized, but I will try to document as I go along.