I decided to change the chassis conception. Rather than laser cut it, i decided to make it in plastic (3D printed). The reason behind this is to simplify assembly, and make everything more solid and weatherproof. 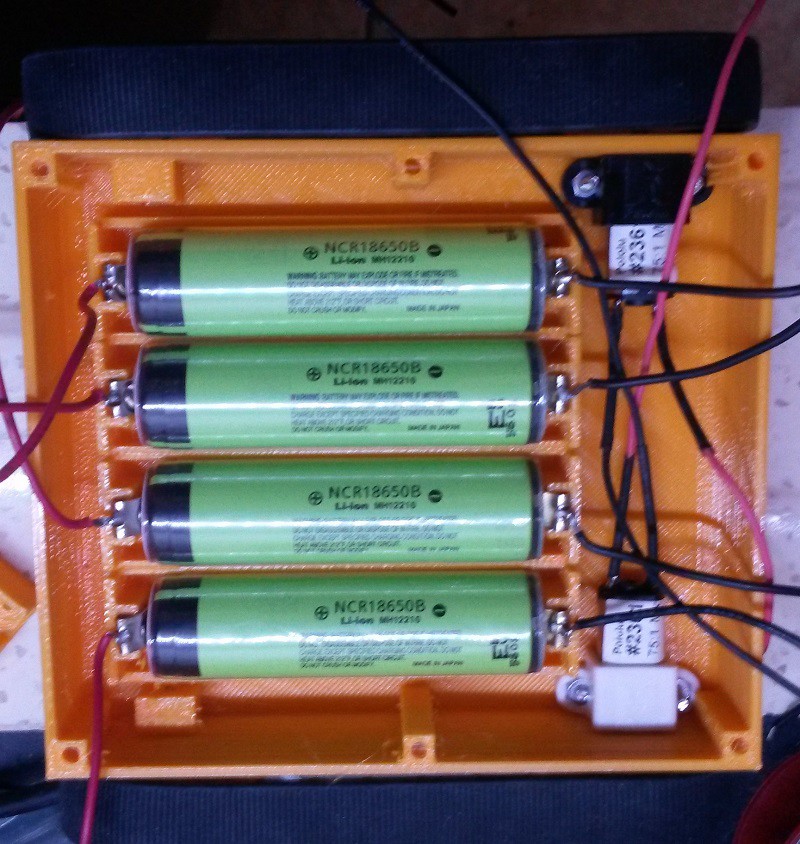 I thus decided to make the lower part of the chassis a monopart design. It is thus meant to be printed in one piece, so no assembly on this part. It is mostly closed on the bottom and sides : there are only 8 holes :

You can see the 3D design here : 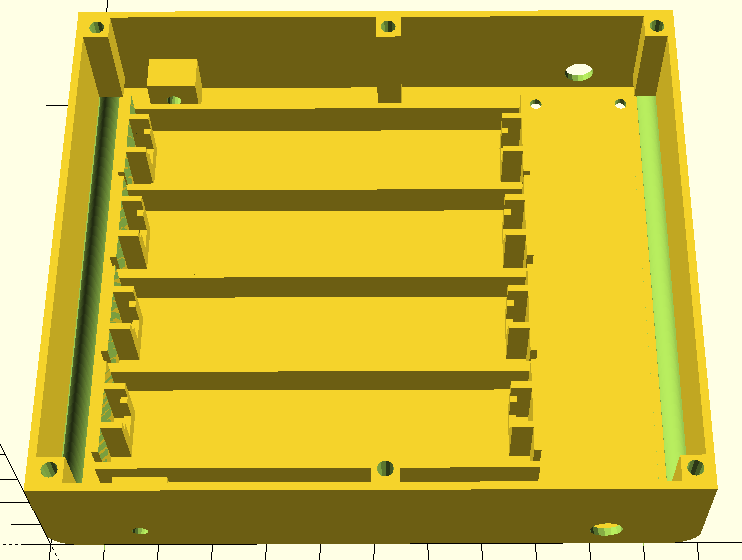 The front and back are curved, so that it doesn't get stuck on obstacles. The chassis is slightly shorter than the tracks, so that the tracks can grip on obstacles rather than having the chassis bumping into it.

The batteries are as low as possible on the chassis without hindering ground clearance (as high as possible with those tracks), and take place directly on the bottom.

With batteries, motors and motor rotation sensors, the bottom of the chassis weights approximately 400-430g.

The Raspberry pi on standby is aproximately half a watt, so 100 hours of idle runtime. The motors draw 1.6A max, so 3.2A max, at stall, meaning that in the worst case, i'll get 4.25 hours of moving time, in the WORST case.

More realistically, the motors will draw 200-300mA each, so let's say 600mA for both, +300 for the pi, the wifi activated all the time, and various sensors, the camera module, etc, so let's round it at 1A while moving. It will still provide 13 hours of moving time, with all systems on.

According to my calculation, those batteries provide 250Wh per kilogram, which is excellent, considering that lipo are given up to 270.

Plus those are metal cells, so more solid than the previous ones. I did pay 30$ for the 6.6Ah pouch cell back then, whereas i paid 35-40$ for 10 lipo cells of 3.4Ah, so 34Ah of total capacity. Cost wise, it's much better. It's more modular (i could make a chassis with 2 cells, and more capacity, or make it larger, and double the capacity if i wanted to..), it provides better efficiency (less mass for same capacity or more capacity for same mass), they are more solid, better quality (i know the origin of the cells -panasonic-, and they are good quality cells).

All in all, i won't be using pouch cells anymore, unless i need really flat batteries. Here is the link to the very model i bought :

Yes, i bought it from china, but it doesn't mean it's chineese ultrafire batteries. I have tested the cells with a good charger (full charge then full discharge at 1A, i got 3430mAh or things like that on the 4 batteries i used on the robot (4 at random among the 10, i didn't test all 10).

For cheaper (25€ for a 10 pack), those batteries are also available, but they are 2.6Ah, same size. This time, samsung sells, i didn't test their real capacity yet, but they seem to be real batteries.

As for the battery box, i could have used something like this (and i bought a 10 pack). However, those boxes are too short : the protected cells are longer, and they fit when using a lot of force to put the batteries in, and can easily pop out. I designed the battery holder to be the right size for those cells (link is the openscad file). You remove the battery tabs from the unsuitable battery box, and put them in the robot batteries slot. They make the contact.

Before printing the chassis, i encourage you to print the single battery box, and test it with the batteries you'll be using, as lenght is not standard in those batteries, and can vary. Normally it should fit 18650B cells, but it's better to waste 2m of filament rather than 20.

The bottom part of the chassis is to be printed with the flat part on the print bed. It prints easily in PLA, i didn't try ABS or nylon. However in PLA it's rock solid. No supports are needed, the part is meant to be easy printed.

Then all you need is a pair of pololu motors with their brackets, a 30T track, a screwdriver and an hex key. You put the motors in place with the screws and nuts, the idle sprocket supports, pop the wheels on the motors, and put the tracks. The batteries take place in their slots, and all that is left is some wirering of the batteries and motors (Solder the motor wires prior to installation!)

In the next post, we'll talk about the second layer of the robot, where the raspberry pi and other electronics (and sensors) are fixed.

Connection between the two stages of the robot