A large hexapod using a frame from ebay, HXT12K servos from HobbyKing and a Parallax Propeller as the controller.

After seeing Bill Henning and Bajdi on Let's Make Robots build hexapods using kits from ebay, I decided to purchase one myself.
I started building this robot in the early fall of 2014. When my wife initially saw the robot's limbs move, she suggested we place our treat bowl on the robot and use it to serve treats to the neighborhood children.
The robot was not completed in time for Halloween of 2014 but we do plan to use it in 2015.
The video of the test walk shows the robot is currently more of a "bucking bronco" than a food service device. I still have some work to do before Halloween 2015.
I've read many horror stories of voltage regulators burning out with these hexapods. This is why I went with two 15 Amp regulators. With two of these large regulators neither one should get very hot.

Here's a video of the hexapod with its newly working eyes.

I used pre-existing "objects" (Propeller version of libraries) for the servo pulse generation (produced by one cog). I also used the super awesome "F32" floating point object. This object runs in its own cog (one of the eight processors on the Propeller) and acts as a floating point coprocessor. I ended up using two instances of the F32 code (each in its own cog) in order to keep the IK calculations running fast enough to generate the 18 servo angles each 20ms control cycle.I have a smaller hexapod which I had previously writing code for. I used this same code on the larger hexapod but found the large servos don't move the same as the small servos. Apparently the different servos have a different angular range giving identical pulse signals. Obviously the code needs some tuning.

Using the IK formulas posted by a member of Let's Make Robots, I wrote my own inverse kinematics algorithms. It turned out generating the IK angles for the various servos was relatively straight forward, what gave me trouble was calculating the location each foot should occupy based on the input from the wireless Wii Nunchuck. This is why I needed two instances of the floating point coprocessor. One would calculate the angles of the servos while the other would calculate the desired location of each foot.

The only processor used on this robot is the Parallax Propeller. The extra PCBs used with the servos are passive and are used as a way to conveniently add power to the servos. The Propeller microcontroller is directly controlling all 22 (18 + 4) servos. 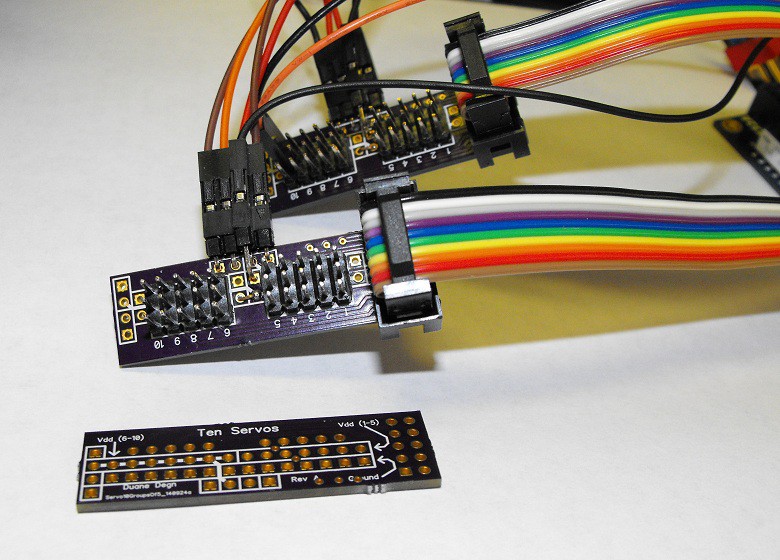 The present code uses seven of the Propeller's eight cogs (processors). All but 588 bytes of the 32K RAM have been used. There are several ways I could reclaim some of this memory so I believe I could still add some obstacle avoiding algorithms to the program.

I think this is a great project to show what the Propeller can do but I think I'm getting close to maxing out the microcontroller's resources.

I personally really enjoy this sort of programming (inverse kinematics) but I will confess to feeling like my brain was about to explode on more than one occasion.

This has been in immensely fun project so far. I have had other commitments which have lately prevented my completing the programming this robot deserves. I hope to make time to complete the programming soon.

Update of sorts (30 January 2015): This project has been screaming for attention since I've uploaded it to hackaday.io. I thought I'd add a check list to this section of the project.

1. Animate eyes (a bunch of tasks involving the eyes).

1a. Code to allow arrays to display the eye images and animations. Done 15.01.29 (year.month.day)

2a. The screws holding the servo horns to the servos keep coming loose. The need Loctite.

3a. The Nunchuck receiver needs a home. The receiver needs to be accessible since the I2C signals can interfere with loading code to the Propeller's EEPROM (which shares the I2C bus).

4a. The power switch presently dangles from the back of the hexapod. I'd like to find a good place to mount the switch. The switch should be easy to access so the hexapod can be powered off quickly.

5b. Improve the way the robot waits for commands. Presently the robot robot will sit with legs raised in the air until a command to continue to move is given.

5c. Code transitions to and from an "at ease" state.

5d. Code transition to and from a low power state. Have the robot pull its legs in and rest the majority of the robot's weight on the...

Ouch, that's unfortunate. Removing all your content is always a drastic step, and it's difficult to find the proper reaction for that, especially when you just got a whole community on your hands that you have no idea about. Personally, I hope that the new management will straighten some things that made myself remove my content from that forum a year ago.

This is soooo awesome. I love the blinking eyes. Seriously, an awesome robot. If I'd ever make a robot (don't know enough to do so), I'd make a spider.

Thanks. I'm glad you like the eyes. I'm hoping the ability to change the eyes' shape and behaviour, will allow the robot to take on various apparent personalities.

There's no fun (or humanity) in scaring a two year old child with a robot. I'm hoping the big "puppy" eyes will put small children at ease around the robot. (Not that I want kids physically interacting with the robot. I know from personal experience, the robot's servos are strong enough to hurt a person.)

The threatening eyes will be used with teenagers and adults.

Hopefully I'll be able to program some "personality" into this robot. Having the ability to animate the eyes both with the LEDs and with the servos should make the task of adding personality easier.

Ah yes, that's what I love in your video. Because that robot actually had a sweet look, sweet as in cute. Keep up a good work, and please, do let us know on how things are going!

Nice to see the project progressing slowly but surely!

Thanks. I'm very anxious to get back to work on this project.

I hope to work on this robot this week.

A Roomba based research for artistic expression
Project Owner Contributor

A family of tiny robots, each with their own way of life.
Project Owner Contributor