The goal of this project is to design, build, program and test a quad copter completely from scratch. This project is for my own learning and fun.

Once I have the quad copter flying manually I will start looking into autonomous control and I plan to use this for my University final year project.

At the moment my quad copter fly's under manual control and I'm starting to implement autonomous control. The features I hope to implement are:

My University final year project starts next week so I will posting weekly updates, links to resources that I find useful and videos!

I designed, built and developed a Quad Rotor including the frame, electronics and flight control software as I thought it would be an interesting challenge and learning exercise. The software is written in C++ and runs on an on-board micro-controller called an mBed. I used the Quad Rotor in my University dissertation, developing semi-autonomous features such as an altitude controlled mode that enables the Quad Rotor to maintain an altitude, follow the contours of the ground and land automatically if the Quad Rotor loses connection with the operator remote.

I also developed an accompanying Base Station application to receive wireless telemetry data and control the Quad Rotor. This is written in C# using the WPF charting toolkit to display real time data.

The various parts of this project are covered in more detail below.

The Flight Controller electronics consist of a single circuit board containing all the necessary components and peripheral connections to input/output devices. The inputs to the electronics are shown in green, the Flight Controller software, running on an mBed, is shown in red and the outputs are shown in blue. Whilst designing the electronics prototypes a few points were considered. The most important consideration was sensor accuracy as the Quad Rotor is not able to maintain stability unless the attitude and altitude data are reliable. Another consideration was to ensure that all the components could be powered by the 5V DC supply from the battery and that the micro-processor chosen was sufficiently powerful to run the flight control algorithms at 500Hz. 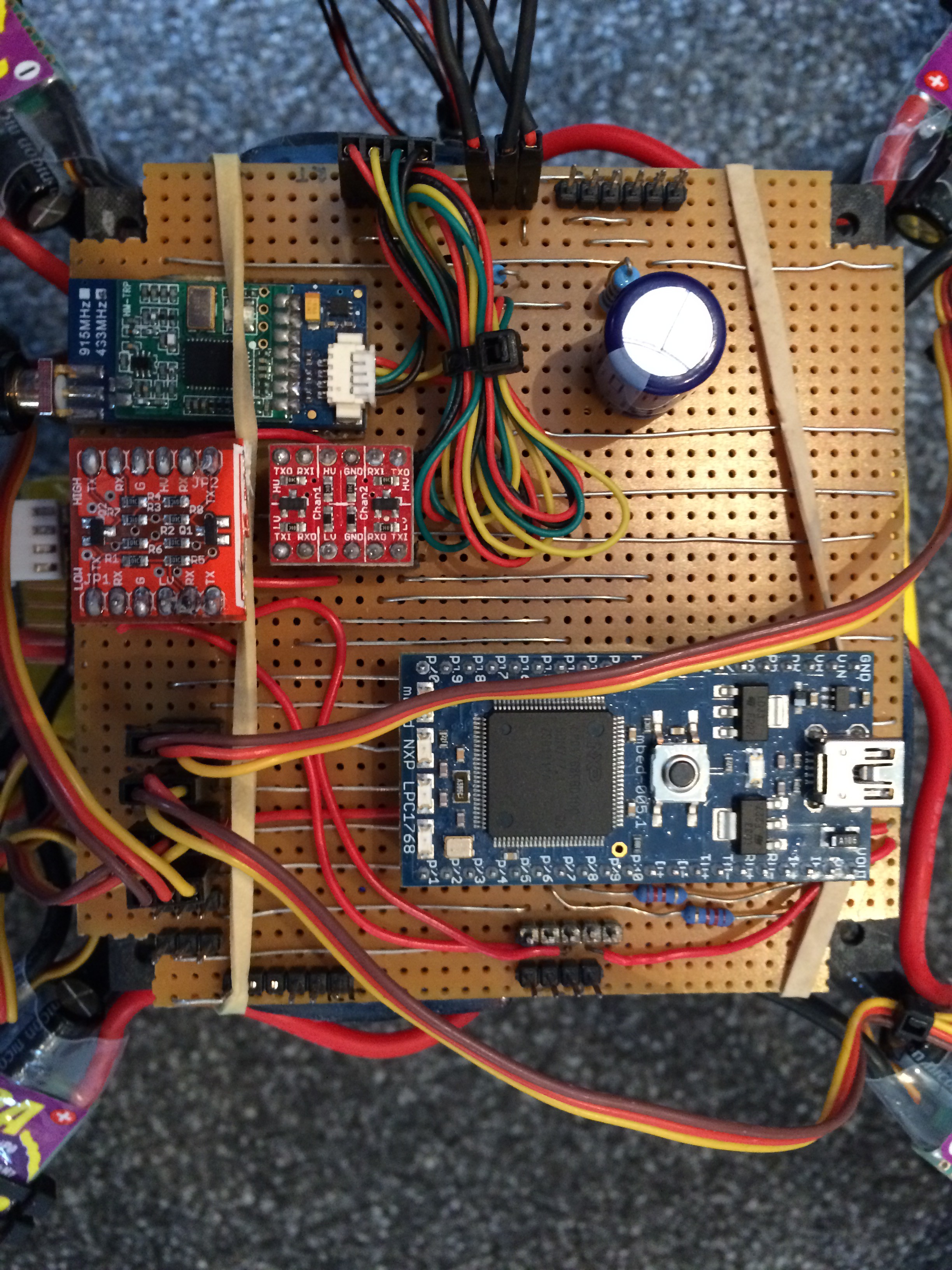 Pre Flight: the Flight Controller starts up and immediately enters the pre flight state. Initialisation and sensor calibration is only possible in this state.

Standby: in this state the Flight Controller has been initialised and the remote control connected.

Ground Ready: in this state the Flight Controller has been armed and is ready for flight.

Manual: in this state the Flight Controller is flying in manual mode.

Stabilised: in this state the Flight Controller is flying in altitude hold mode.

Error: in this state an error has occurred. The motors are disabled...

can u please upload the project complete, so somebody can rebuild it ?

That's nice! Can I ask you what  are your considerations for choosing the IMU? I'm doing an autonomous boat but I'm struggling to choose the right IMU and I really need some suggestions so I'm asking around :D https://hackaday.io/project/10652-green-powered-sailboat

3d position tracking using our own design of the sensors, an altera fpga for decoding the signals and custom code for triangulation and poseestimation
Project Owner Contributor

Control your favorite synth with your most refined muscle set!
Project Owner Contributor