Chips, from left-to-right, top-to-bottom from under the SDRAM DIMM:

Atop the DIMM is a two-position (three-pin) jumper, used to select compatibility with software for sdramThing4.0 or sdramThing3.5 and below. This reroutes one chip's DQM differently so that the LCD's Blue (and Timing) data can be modified without having to recalculate the Free-Running commands, nor the LCD's clock. (The LCD's Blue/Timing Data, as well as the clock, is on the "Free-Runner" as that data--the cursors and status-bar--remains constant regardless of new samples). This change, mainly, was an attempt at allowing for changing of the blue-data despite the "double-write" issue, from before. Though it's a useful feature I'd had on the backburner, regardless. 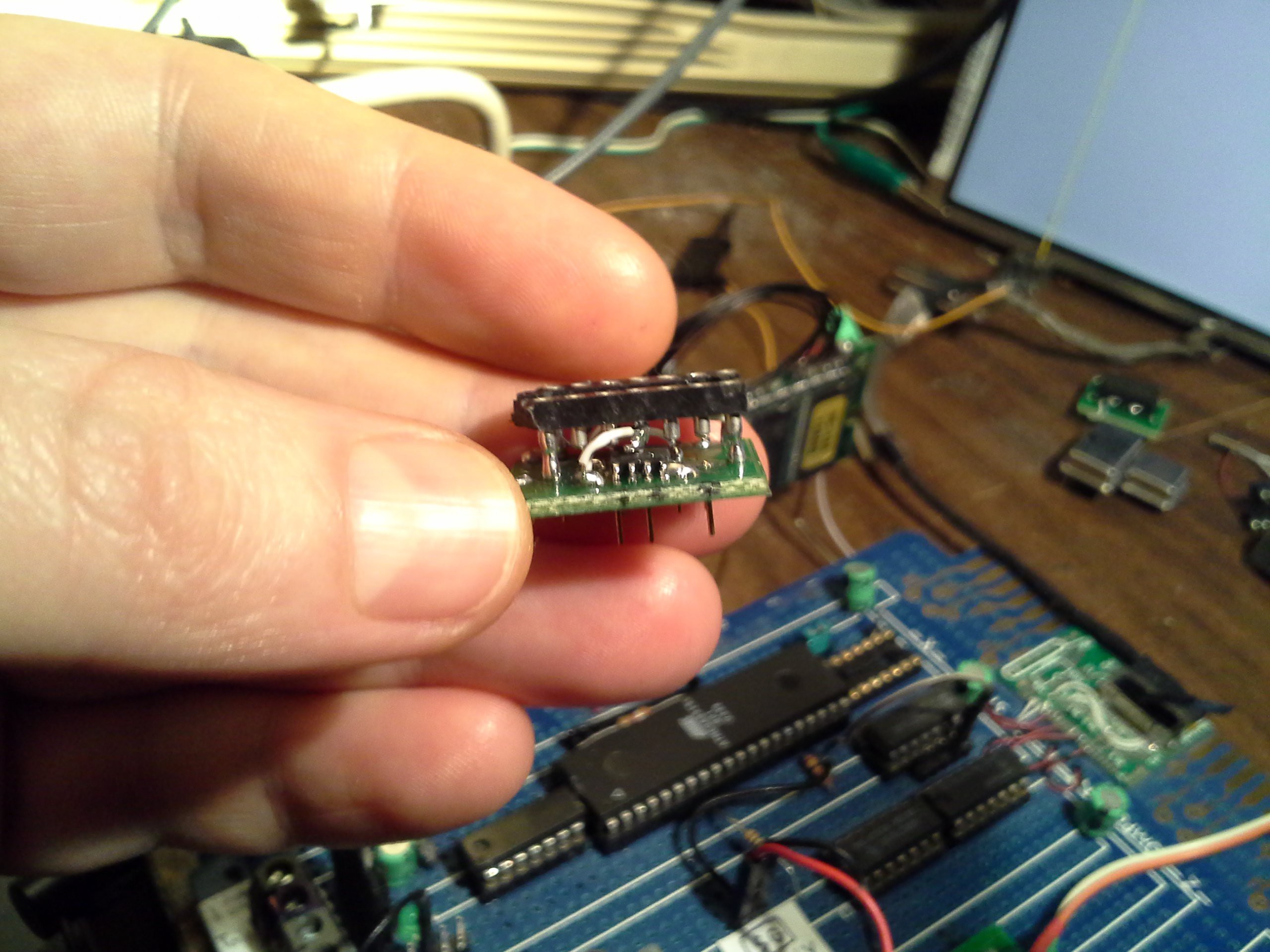 This guy fits in the original crystal-oscillator socket (seen in the background, right of the AVR)--with just a few rewires--and adds 5 buffered clock outputs... Handy... Some of my oscillators don't have the drive-strength for 8 SDRAM chips, the clock-divider, and 4 Flip-Flops.

ALSO: It has a 5V-tolerant input! Also handy, some of my oscillators don't play well with 3.3V. Next to the socket, in the background, is a three-pin two-position jumper for selecting 3.3V or 5V to drive the oscillator, which now gets attached to the top of this breakout-board. Also, this handles both 14-pin-spacing oscillators as well as 8pin. WEE!

Below: The latest sampled-data from the motor-driver...

(Apparently my uploading didn't go in order, and I daren't copy/paste these, as it'll likely take forever to reload them on my flaky 'net connection) 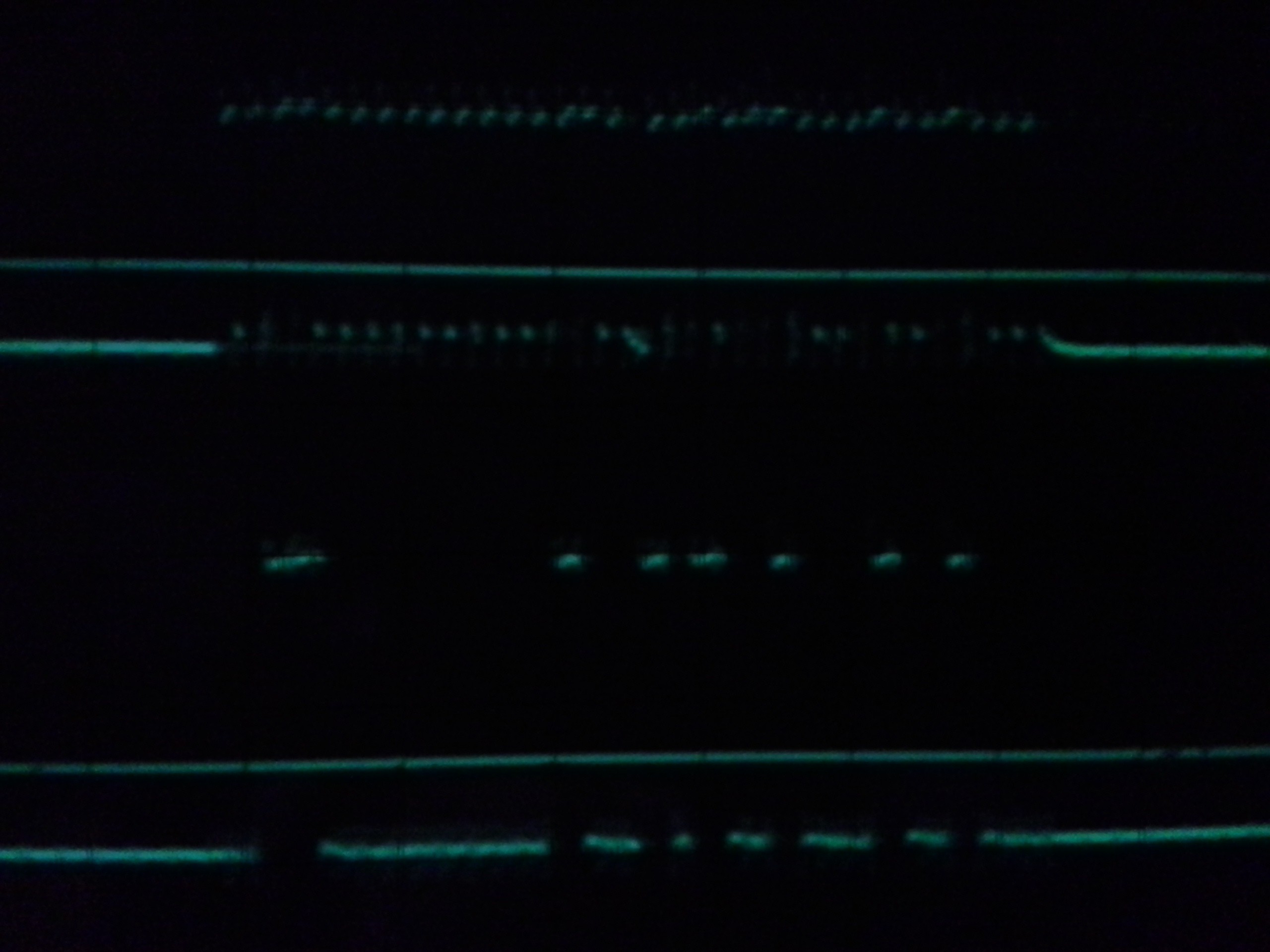 The upper trace(s) show, I presume, the clock-signal. The lower trace(s) show, I presume, the data-signal. (There seems to be a new bug in sdramThing4.0, the horizontal lines shouldn't be there). Otherwise, it *looks* about right, by which I mean the clock appears to be toggling at roughly 50%... I forgot to check the timing on my 'scope, but some of those toggles look a little skinny. I'm not sure the cause... But, it's plausible the toggling-rate is actually, still, slightly faster than my 30MS/s sampling. This *might* be corroborated by the fact that I'm counting, at best, what appears to be a pair of 16-pulse trains... Yet, as I recall, the *similar* but not-identical motor-driver I have specs for claims 18bit packets. This is why I wanted to sample this thing... I don't know if this chip uses the same data format as the other. That, and... I didn't quite understand what the registers *do*, especially on initialization. The *other* chip has some strange (to me) settings related to current-output, drive-strengths, and whatnot that I just can't parse from the data-sheet.

This packet is the first seen in the image below. Two channels are currently in-use, corresponding to the two channels on my 'scope. One is shown on this display as Red and the other is shown as Green. Each pixel represents 7 data-samples. The cursors are (roughly) selecting three data-packets. The first packet is shown on the 'scope traces, shown earlier.

The status-bar, at the top, shows the number of samples between the cursors, as well as a "Delta" value for requested cursor-movements.

The cat found a good pillow... Thank you for the pictures! I now realize the burden they are for you, sorry to pressure you :( I wish they will benefit others also :)

No pressure, I'd been meaning to anyhow, and it's a good idea in general. Thanks for--not pressure but--the motivation!