I think they want us to build a space ship from junk yard stuff and beat the commercial companies at getting back to the moon first!

I know you found it, but there is the link: https://www.youtube.com/watch?v=xa1s8vqhMz8

Just as a small data point: I've been looking at the spectral data of the audio in the "(02,02)" youtube video. The first thing that popped out at me is the static burst at the end of the video. It looks like this:

I tried applying a LPF and it still looks like nothing important.

The second thing I did was try and determine if any of the other audio had useful data. Barring some low frequency stuff that's meant for human decoding (dot and pause of various sounds) I couldn't help but see this in the spectrum repeatedly. "55 (echo) 66 (echo)" ITS TOTALLY JUST MY BRAIN TRYING TO DETECT A PATTERN RIGHT GUYS? -_- 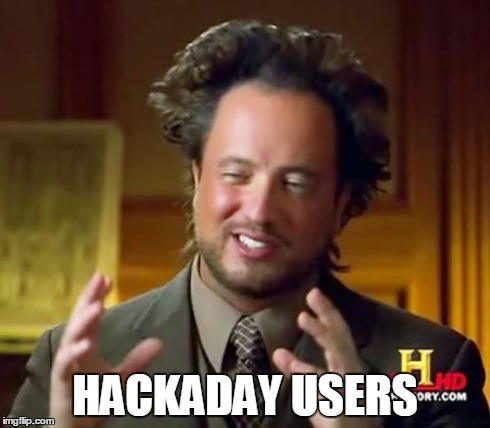 I just posted my non-findings so that others may avoid that empty rabbit hole (and to provide a chuckle maybe), but thanks for your contribution.

LOL I just wanted to share a laugh too :) I'll try to post some of mine as well (anyway, did anyone notice the rapidly changing numbers in the bottom right corner during the last seconds of the video, when the HaD logo appears?)

Shall we play a game?

Since the blog title for the video was "All good things repeat repeat" - I'd say that's the reason it's (02,02) - for the second hackaday prize - with an astronaut pointing to it.

Guess I'll have to wait until after work to dig into this much..

Didn't think of it before, but I'm going to scour the one time pad for plaintext words.

Nothing too exciting, but I posted the raw search results that I generated over at

http://otp.portablesofdoom.org/search.txt
I think the most legible sentence pulled from words that appear in order in the plain text is "Hand them a pot" around 0x1E 0x14D
The search was only sequential though and didn't look for words in a crosswords type pattern

Yissir, but now what, this cant be more then a little taster of a larger campaign, can it?

Edit: poking around at everything i can think off, but no result yet :(

This project seems to be the teaser for the trailer on the blog for the hackaday prize 2015. And I thought this was a secret message jpeg and tried to get some data out of it via online steganography decoders. Let's say I learned something :D

Thats what i was doing too (aswell as trying some things with the 'one time pad brute forcer' somebody built. Edit: Gannon's!) but i must be failing, since i either get nothing at all, or some weird string that looks like german meets 'leetspeak' of some sorts, so doubt thats correct :P ah well, space is too cold for my preference anyway ;)

I say there's no code at all :D I could try to decode the german leetspeak, but I doubt that they did that.

Again, most likelly nothing, but for completeness (and saving whoever runs into this after me some time) one of them gave me this when i tried to pull stuff from the avatar of this profile: "I$¶-Ëi$-I%¶ß"

That really makes no sense, but I got that too, at one point, as a filename though :) One could argue that it's something like "IST EIS I%TSS" - but "is ice ..." - not really a sign for something meaningful. An 'ß' would never follow a 't'

Hehe ok (yeah got it as (empty) .txt aswell actually) i was thinking it said something like "IST EIS ISS" (no clue what that would mean) but guess its a bit to far fetched hehe. Thanks for trying to translate nevertheless :)

That would be me, but more info on the decoder project available at

Righto, added, thanks for that tool :P

I'm no expert, but the exif data for the png doesn't seem to match the actual image.

@Jeremy Lambert I'm not seeing what you're seeing in the EXIF. The image does seem quite large for its pixel count though... maybe run it through a steganography detector?

Your first project Hackaday congrats!! The name refers to coordinates? The number below is from your product ONE TIME PAD (http://store.hackaday.com/products/1407981609)...

The 2017 Hackaday Prize
An open-source, modular, centipede robot platform that can be used as a tool to teach programming, electronics and other maker skills.
Project Owner Contributor

Hackaday Prize 2019
An IoT project, where you will learn the basic of programming, electronics, and 3D design. www.pytobot.com
Project Owner Contributor

This is my summer project. I am planing to make it look like a WWII jeep
Project Owner Contributor

The Gluss Project is an attempt to build flubber---that is, to make a controllable material that assumes any shape. Gluss = Slug + Truss.
Project Owner Contributor