Automate the Reagent (take a sample, put a drop of stuff in, shake, look at the color) testing of water for Aquaponics, Ponds, Aquariums.

So by skipping out on some work I was supposed to do and continuing to ignore a client who really needs me, I was able to find the time and energy to make a little progress.

1. Sample Intake Valve. The BOB board I'm using has space for a relay driver (originally for spindle power) which is setup in such a way that it can use Vcc (for a little 5v relay) or use an external power source for a larger relay or, in this case, the Adafruit water solenoid valve. The circuit can use different power sources, because it's designed to just ground one pin, rather than connect a pin to power. So one terminal, J7 is NOT used, because it's just the Vcc power supply from the board. The other terminal, J8 pulls one lead of the coil low via Q1 and the other coil lead connects to +12. Back EMF diode is bodged in between the connections.

Control is via A5 on the Arduino which is strapped over to the normal input to the driver circuit via a 2K2 resistor. I initially (accidentally) had it programmed to stay on all the time and close only when it should take a sample, and it got a bit toasty until I figured out it was working backwards! Seems to run cool now.

2. I've added an external 12 VDC wall wart power supply feeding into the Arduino. That was /really/ difficult: I plugged it in. Then soldered on a terminal block to the BOB where it was designed to take unregulated power and used that connect the motor power for the stepper motor driver. The BOB connects to both the regulated and unregulated supplies on the Arduino, so no problems there.

3. Most of the time today was actually spent figuring out how to mechanically mount the stepper driver and the Arduino / BOB control board. I drilled and tapped into the heat sink for the THB6064AH stepper driver and lined that up with one of the holes I drilled in the stepper motor mounting bracket. A bit of rubber to isolate the PCB allowed me to just bolt the corner of the BOB to the bracket as well. Very bodge.

The stepper driver takes up a lot of space... again, that driver is like using a nuclear reactor to fry eggs for this little NEMA 17 motor, but it's what I have available. I have the current turned all the way down on the driver and the motor is still getting a bit toasty. But it's really nice and smooth and quiet, which is nice. You should use something much smaller. Like a Linistepper.com LOL.

Here is a video of it running.

And here is the back: 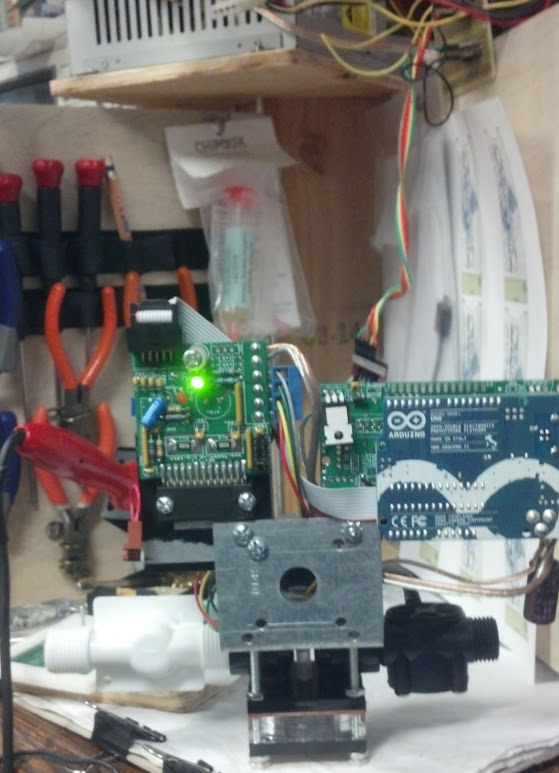 you can see the TIP122 driver for the valve hanging upside down on the back of the BOB. Colored wires are stepper motor leads. Ribbon cable is the PMinMO standard connector from the BOB to the THB6064AH driver board. White water valve on the left, and the flow rate sensor in black on the right. Reaction chamber at the bottom.

Still gobs to do. Figuring out the reagent injection system is next... anyone have experience with syringes, luer locks, and one way valves?