Last update was 24 days ago! Well, had many foster kittens and got a new additional job! Which causes lack of updates. 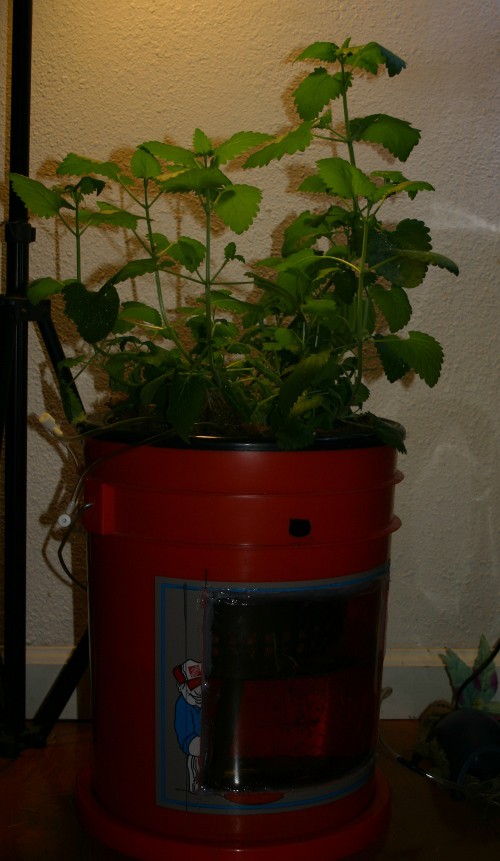 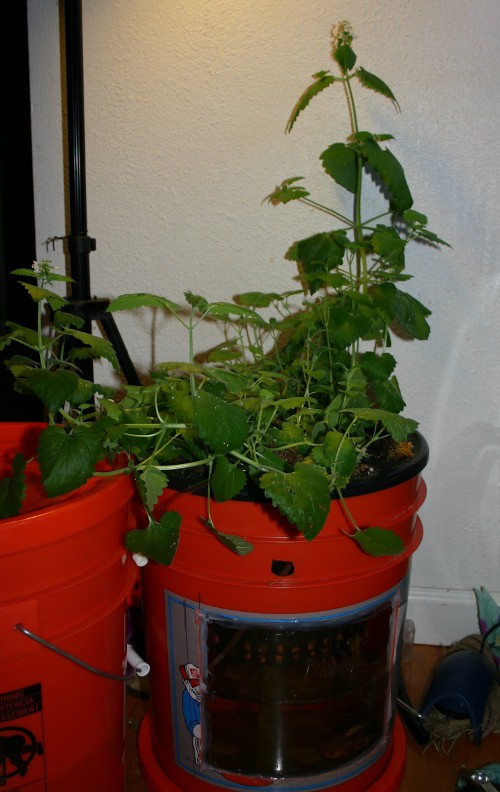 My job and kitten wrangling didn't stop the catnip. Its blooming now. Yes, the torn/holey leaf is from cat noms. The white speckles are diatomaceous earth (cats, possible fleas, bad!) The leaves are enormous, and until the cats try investigating/nomming, the stems stay upright. After they tip, the tops keep aiming for the light. There's a lot of new growth in the 'center' of the pot/grow area, small leaves, lovely dark green.

Not very visible in the picture, are roots shooting down into the water in the bucket. The roots are also getting some 'fuzz'/algae growth on them - which the upper portion of the plant doesn't seem to mind at all. Since the water-circulation method isn't high throughput, sediment (from food) does seem to accumulate easily. The minnows don't seem to care much.

Alkalinity (KH) - between 40 and 80ppm, which is low/moderate

Nitrate (the good one) - an awesome 200ppm or more

Phosphate - between 2 and 5ppm, not actually sure what this means, but for the liquid-based test kit I got the "pond" version instead of the "aquarium" one, so I have Phosphate instead of Nitrate. My nitrate number is from a little dip-strip thing (along with GH and KH). I was hoping it would give me an indicator for blooming/fruiting capacity.

So, one big advantage to dual root zone - aka - DIRT ON TOP indoors and with lights on, is that you don't get: 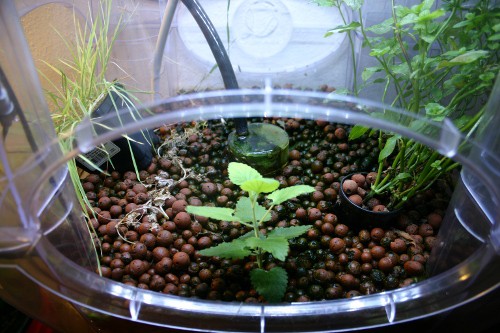 Algae/mold/etc growing all over. That green sprig in front/center of the photo is the top bit of a broken-off branch of the catnip plant, and I just pushed it into the hydroton in the Aqualibrium system that sits next to my 5g bucket. The thing on the right is a mint plant, its all leggy and fairly yellowish (though still green) compared to the catnip. The cat-grass (wheat) is very yellow and dying. This system has guppies, and guppy fry, at the moment - which means its got plenty of chemistry working for it, but I think the algae/etc is 'eating' a lot of what the plants want. And its such a pain to clean this thing. The tank-section also has algae, though the water-science is ok yet. I need to do work with this thing to make it better.

End of May, Dual Root Zone