This project is our contribution as a team to a university laboratory competition, numbering six teams, each with around six members each. In the course of a single quarter, eleven weeks from the very beginning to the very end, each team is tasked with building an autonomous robot capable of competing in four of five total events. The events are held on the very last day of the quarter.

Shown below is our schematic. The STM32 is responsible for driving the motors, reading their encoder feedback, querying the GPS and IMU, driving the speaker (signal), listening for the go switch, and communicating with the PIC18F4321 which is responsible for processing the sonar data. All power is 5V and VCC is 3V. We originally planned to implement a Raspberry Pi 2 as our computer and use the OpenCV libraries for vision processing, however, due to time constraints we had to abandon task. Our system is entirely based on IMU and sonar for sensing, and the motor control/encoders for driving and feedback. 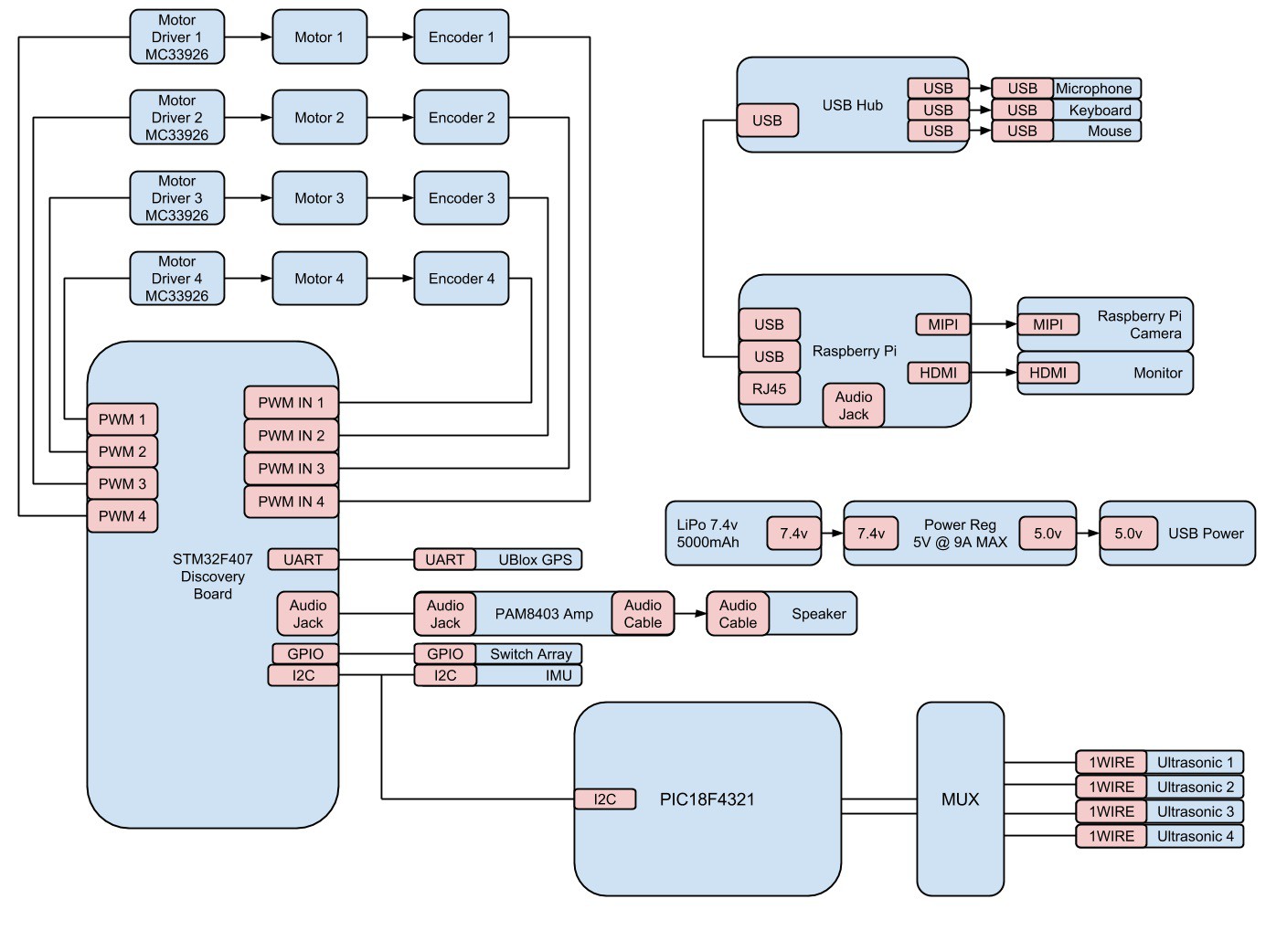 Our system design, as shown below consists of 4 essential processes. The first is a routine which queries all sensors, sonar, microphone, IMU (inertial measurement unit), and GPS. Using the following data, and based on the specified state mode, the second route, the robots guidance state machine, decides an action and executes it. If an obstacle or disturbance is introduced into the system, the robots halts the process and decides the appropriate contingency plan to execute. The third routine is the time sensitive control systems code which is responsible for odometry and keeping the motors at a target commanded value. The final routine is responsible for any low priority (yet important) tasks such as "mooing" the speaker. 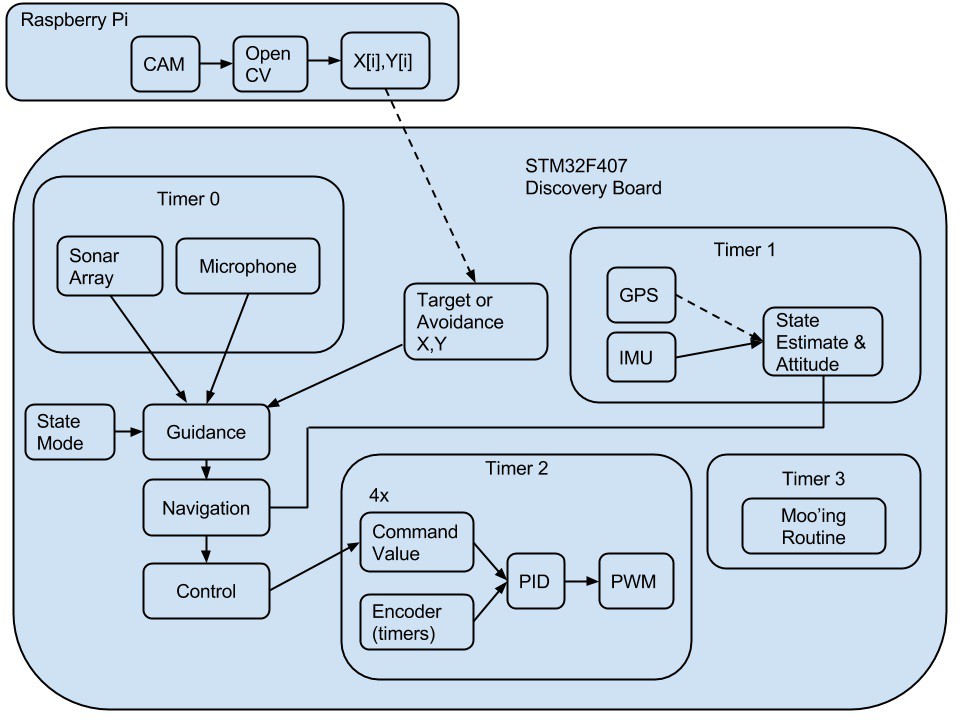 Having purchased appropriate DC motors, wheel hubs, tires, and a chassis, the next step in building our system was to develop an intelligent way of controlling the motors. From a high level point of view, it would be nice if we could simply think (programmatically, as robots do) about going straight at a certain speed or turning about a certain radius and having it happen. Our ability to reliably and efficiently carry out these "low level" tasks is pivotal; the entirety of our task-completing ability depends on this movement. It cannot be over-stressed how important a solid control system overlaying the DC-motor-controlled wheels is.

The first step here was to read our encoder values. This is done directly on the STM32, where we use timers and interrupts to determine the four frequencies. We only have one encoder returning from each wheel, which gives us the speed of the wheel; direction is determined from the current settings of our motor driver, which determines direction. Then we were able to advance to open- and closed-loop control of the wheels. Our command for each wheel is given as frequency, the desired frequency of the encoder feedback. Below is a simple block diagram of our closed-loop control. 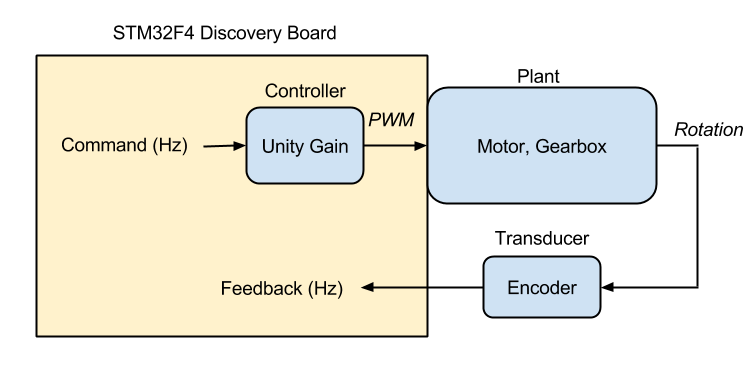 Next we added our PID controller. Tuning each wheel became necessary, as no set behaved similarly enough to tune together. The good news, however, is that once PID tuning is completed, high-level programs can utilize the PID controller simply and easily. The tuning process was methodic and repeatable, which was good because we needed to re-tune a couple of times over the course of lab. The process is such: Having basic PID control code initialized, we set the integral and derivative terms to zero while tweaking our proportional term (KP). A good value is found by feel more than anything else; we could hear the motors respond and see (via live debugging) the current encoder frequencies. Next, keeping KP the same, we do the same with the integral term (KI), and finally with the derivative term (KD). Some slight changes to KP are made along the way to ensure a more ideal response, also. Each wheel set came out with its own gain values, with which our vehicle responded well.

We must note here that our PID tuning takes place on a stand, where the wheels are free to spin unloaded by the weight of the vehicle and with the friction of the ground. For the most part, the difference between unloaded and loaded operation did not seem to affect our tuned system. However, our back-left wheel did react noticeably slower when loaded. It did not take much more guess-and-test tuning to mitigate this...

can you please provide me your data,report, material etc i need it for my final year pprojec purpose

OpenCV and an autonomous robot - awesome! I love projects like this - and I've been hoping someone would get the Raspi2 on a mobile platform.  Keep up the good work!

The 2017 Hackaday Prize
An affordable modular platform for open robotics development for hackers. Provides a jump start to build your own robot.
Project Owner Contributor