I want make a moving time lapse video chasing a sunset at ground level from the east to the west coast of the U.S., but firing rockets at high speeds over populated areas inside controlled airspace is kind of illegal. This could be faked by having cameras set up in a straight line, evenly distributed over a long distance, but impossible for one person.
This will require hundreds of volunteer amateur videographers. I need your help. Anyone interested? 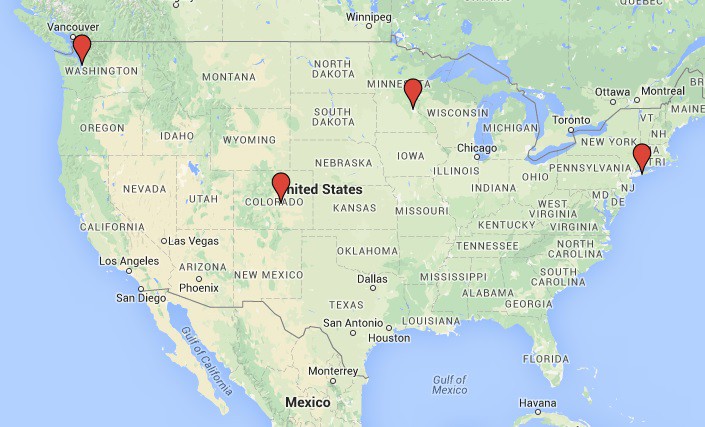 Concept: Start on the east coast of the US. When sunset peaks, start taking frames of the video while moving west at a speed that keeps the apparent angle of the sun in the same position almost below the horizon. End at the west coast.

Purist Issues: It needs to be the same sunset on the same day. It will require hundreds of volunteers to take a short high quality video all on the same day, at the same time, at the same angle. Each person in a different physical location according to a time line map.

Concept Oversimplified: Cameras set up in many locations on a line across the US, each take a picture at the right time, then each frame is pasted together to make a video chasing the sunset. The problem with that is I have this gut feeling it would make a horrible video, looking like a bunch of random pictures flipping by.

The Solution: Virtual Time Manipulation.
Each location takes a video of the sunset. I tediously go through each video to pick the most appropriate frames that best match the previous and next locations. I can also add or subtract frames to slow down or speed up to the next locations to get the best lighting. The result is not a consistent virtual speed over the ground, but a fluctuating speed that captures the best overall scene over all the locations.

Happy to help from 93.3 W longitude if you need another camera!

Make sure to take into account the fact that the sun sets at different times in different locations, due to the local landscape. (For example, in a valley, the sun goes behind the hills while it's still higher in the sky.) Maybe have everyone find a nearby location to take their picture/video where the horizon is at a standardized elevation.

Good point! The visual guidelines will cover that as it gets more complex. That and more about earths rotation, rockets, and time manipulation coming soon! Thank you!

Well, not to be a buzzkill :D but more of a buzz "chance giver" :D Find someone or motivate someone with your idea, who is actually constructing within US regulations A ROCKET (an amateur one of course) that can travel the distance (or at its best possible) and do the deed :D I know that MAY kill the Virtual in your idea, but actually will bring the Virtual in your realization of your idea to next level - Virtual as "We took something real and make it available through VR" (for example) And I know this maybe very different but if it's not something You really feel dear and close to you as concrete, specific idea ... I see the steps you have to take for that developing for many many years. It will be faster, cost-wise , etc. etc. to actually launch an amateur rocket and travel some distance (even very less than you initially intended) then when you get publicity, awareness about the awesomeness of the idea and the project  :D you will have (i believe that) sponsors, investors, co-...workers/inventors/dreamers/engineers and so on and so on :) I'm only giving you my .... view / opinion over your project. I'm far from Photography and not very close (yet) to Rocket Engineering :D Pardon to "Rocket Scientist" , but I have taken my first lesson from TBBT and Leonard not to trust hot chick from North Korea that wants to see the fuel for the rocket I'm working on :XD / hope the joke was successful :D
GL !!!

Thank you so much! I seriously appreciate any advice or criticism. I did consider a real rocket, like over the desert and coordination with proper authorities. I would LOVE to do that! Someone correct me here if possible because my numbers are no where near accurate; hobby model rockets (hobby class A through G made of paper, cardboard or plastic) travel only at a few hundred mph, with burn times in only seconds. An Estes motor E12-4 (harder to get larger than E class shipped) has a burn time of 2.4 seconds (Total impulse in Newtons 27.2 N-s). I am looking for 1000mph minimum for minutes or hours (at least 15 minutes minimum). I am not familiar with how long it would take (or long term cost) to get certified to move above amateur (if anyone knows, please help). I am also afraid there would be many complications with camera stability on a

Does anyone know somebody already doing this? (Thanks again buzz giver :)

I did not expect so positive response from you, I have to be honest - I expect some defensive response. It's my pleasure to have the opportunity to discuss such project, man :) Not kidding as formal as it my talking my look like ;) I have to ask a friend of mine, actually an online buddy I met around our mutual interest of Linux, Embedded and Matlab / GNU Octave :D , who is very knowledgeable about US regulations regarding this subject, etc. I'll give him the link to your project and I think he will reply :)
PS: not to be a buzz "chance giver" again :XD But i was hoping to build nano/pico-satellite, I even bought some literature about it :D so  ... If I Launch on time in relation to your Rocket Launch:
Can we video record the rocket AND from orbit ?!. :P Haha I know that's too far , but "A boy can dream" ;-)
PS2: You can use smaller rockets of same type/size/engine MULTIPLE times for longer distance. I'll make this completely wrong associations: (1) It's like booster sequences to get further :D or (2) It's like hitting a target with multiple low intensity "shells", but actually doing more damage than with one much more bigger ;-)

@esot.eric.wazhung and @Dimitar Tomov After all this rocket talk, I am going to have to make a separate project log for Rocket version vs Virtual, develop both and see who wins. Your encouragement is giving me even more ideas.

My buddy for faith or i dunno :D just today has started a veeeery
long journey (actually just traveling :D). So he would not be able to
response soon, but he said when he has time he will look into it :) My
info about US regulations and Amateur Rocket Models actually comes from
him, but PERHAPS this is a good chance for you or us to talk it even
more and then have concrete, specific questions ;) BTW: @esot.eric.wazhung You can build a/the rocket, np, even better - distributed system have been forgotten for some time but now they are back more than ever :D So you build the rocket, he prepares the VR and I ... weeeeel I stay along side and when the time comes will take credit, don't worry guys :D kidding of course ;) But you can (just a suggestion) actually start a project about building A rocket with OSHW & OSS within US regulations for a flight/launch that will be then VISUALIZED :D into Virtual Way on Computational Device :P (i.e it may be PC it may be mobile, it may be embedded and so on) -> it can be Virtual-reality as all goggles coming out nowadays, this year there are announcements of more manufactures even ;) it can be purely 3d onto 2d displays (the games we play today are 3d on 2d plate :XD sorry fur the buzzkill , i said it because many , actually most, people forget that or don't even realize it )

So @esot.eric.wazhung I think your project can be as a part A/B of 1 bigger project where @frankstripod
project will be also part A/B. I hope you will clear which project will
be A , and which B , if you remember one kids cartoon about two bananas
B1 and B2 :D We can call them so and then project A or projects A1 (VR)
A2 (3D onto 2D displays) and so on and so on, btw A3 (3D building
mapping - 3d presentation onto buildings, last year there was this hype ,
it's not a trend for sure , at least for now ).

GL to both of You, will keep track on You guys :)
PS:
if by any chance or accident you build so powerful rocket we can try
and get to mars before those noobs that are only talking so far and
making contests w/ biiig PR stunt in the media :XD I'm distracted
easily, my bad.

or a tangential merging of the two... since skylines may be difficult to achieve from many locations (with mountains, trees, etc), convince thousands of amatuer rocketeers to do vertical launches ;)

This sounds friggin' amazing. I know lots of people who'd think so, unfortunately most are in the same sunset-zone... but maybe they know others.

Depending on the available volunteers' longitudes, it seems you could have a slight pan.

What? Someone likes this? Don't make me follow through on this. Your pretty good at giving me ideas: This would also work moving up or down the west coast in a North South direction for sunset, or East coast for sunrise. Will add as a separate project log later.

The 2016 Hackaday Prize
How about make some money with that quadcopter drone instead gathering dust in attic.
Project Owner Contributor

PROJ QUADCOPTER: What to do with it after the fun?