Standalone or network camera based on a Raspberry Pi A+

I have not decided all the objectives of this project. However, in order to "get things done", i started a subproject : an outdoor, battery powered and wifi camera. This one is designed with a friend of mine who does birds pictures, and thus is meant to be cheap, and autonomous so that we can drop them in the wild, and have it take pictures of stuff. Wifi allow the user to remotely control it, view pictures, etc.

For that project, i used a derivation box, because those boxes are rated IP54 or more, so it should be able to endure rain without problems.

In this box, i put a raspberry pi A+, with a short wifi dongle, an ATmega328p for various measurements (this one doesn't really needs to be here, but since i have the room, i decided to put it in place, and it will talk via serial to the pi, and will be in charge of monitoring the battery tension, control LED, etc), a switching regulator (step-up) and a lipo battery (6.6Ah, 22Wh) with a lipo charger.

About the battery : i tested the system and got 44 hours out of it, when recording the battery tension out of an MCP3008.

Here is what i got : 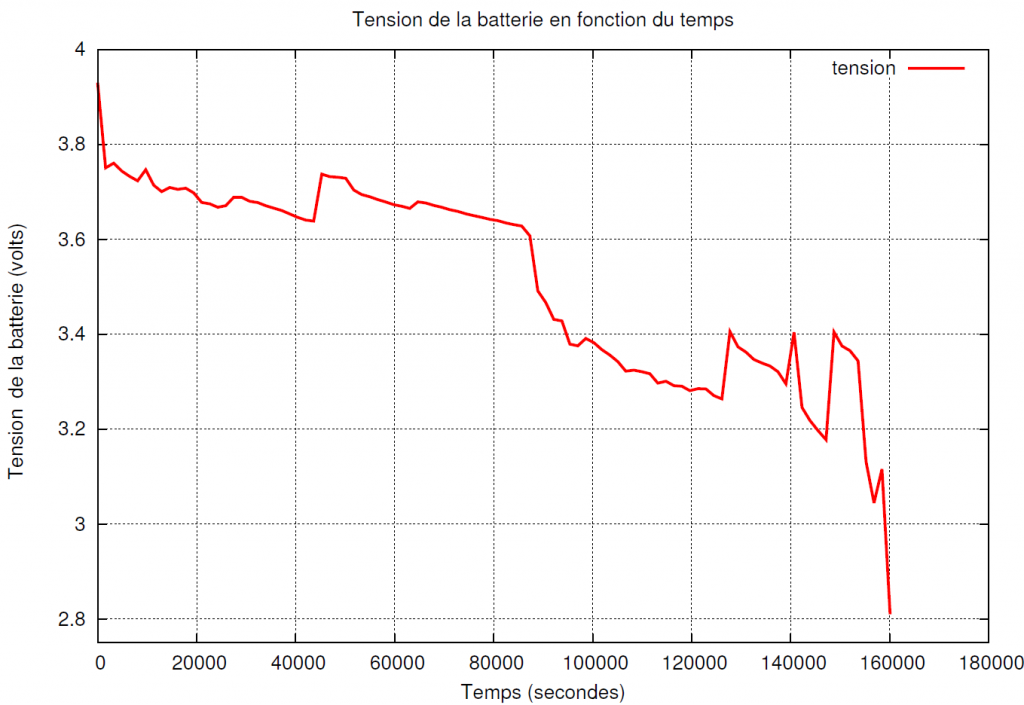 On Y axis is the measured battery tension, and on X axis the runtime in seconds.

Taking a picture approximately adds 100mA, so we go from 100 to 200 mA of power use, so it should last a pretty long time even taking pictures all the time. And if we take 2 pictures per minute, it will be 2 seconds of higher current per minute, we'll get to approximately 105mA average, so we should still get a really long runtime.

The box has plastic locks that keeps it closed (90° turn on those locks secures the box closed, as seen in the picture below : 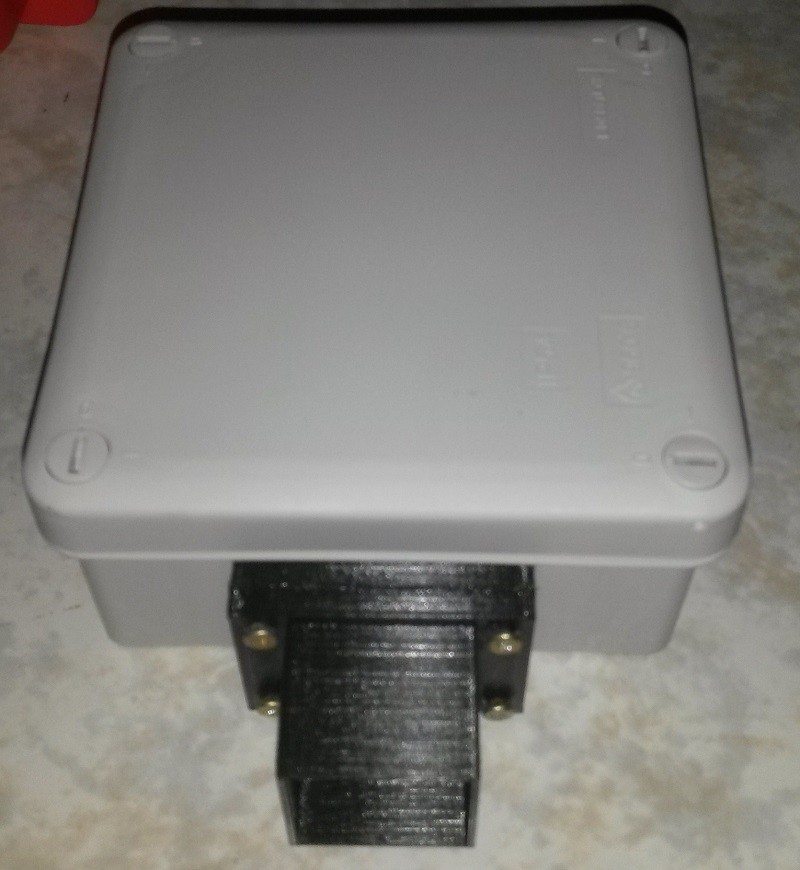 In the front of the device, there is a black 3D printed part. It is meant to protect the camera module from the sun. Without it, the sun makes the image grayish, and washes the colors out if it is coming from the sides. I printed it in black to avoid reflections inside the opening. This is composed of two parts :

The first part (stl file) is a rectangular base, with a hole in the middle, that gets glued onto the box. It has 4 3mm screws holes on the sides. It serves as a fixation base for the second part.

The second part (stl file) has a base similar to the first part, and a square hollow tower to shade the camera module. It is secured with four 3*12mm screws.

On this part, a piece of plexi gets glued to close the box properly. If the plexi gets less clear over time, we can reprint this part, and change it.

On a future version, i'll include a grove for an o-ring to improve waterproofing. (i'll probably 3D print the o-ring as well out of ninjaflex, but i'll try to find standard size so that one can buy regular o-rings).

If needs be, here is the openscad file if you want to modify both parts.

On the inside, there is another 3D printed part (stl file) that screws to the bottom of the box on some kind of fixation rails, and here is the openscad file for this fixation plate if you need to adjust things.

On the inside, this is what it looks like : On the top, the blue part is the battery, with it's charger. Later on, i will add a 5V regulator to step down the output of a solar panel and get it into the charger.

If i can have a solar panel powerful enough to charge the battery, i should have virtually endless runtime, since i get nearly 2 days out of a full charge. I have a 10W solar panel that will sure do the trick, but if i can get away with smaller panels i'll do that.

Of course, battery will degrade over time, so it should last no longer than the battery durability. As for other components i have no worry about them running for long times.

The Atmega chip will also monitor the solar panel tension, the temperature, and perhaps a few other sensors (since it's there, why not add a few more sensors?)

If needs be, it will be in charge of controlling LED in PWM (perhaps IR LED with an infrared camera module). It will also be in charge of shutting down the pi if the battery tension gets too low, in order to protect it, and will put itself in ultra low power until vBatt gets over a threshold.

It is far from finished as of now, but i'll be focusing on software rather than improving the box and the electronics in the near future, so that i can lend a functional device to my friend that takes pictures of birds. This way we can test it on the field, and see what is to improve, and do so.

Note : this module can be used as a security camera also, indoor or outdoor. It's not vandal proof however, but is weather proof. The battery part can be stripped and power be provided by any 5V source. However, the battery can be kept in order to have security camera active even in case of power loss. In that case, 5V input has to be plugged to the charger that will keep the battery charged constantly.

More details on the gasket