Long before Marvel Comic's Iron Man movie series came out, and before Iron Man's technological concepts in the comic pages even got a veneer of plausibility, long before anime became mainstream, I watched a lot of Mecha Anime, from Robotech to Appleseed. I just enjoyed the art style and the stories. But the design concepts and ideas put forth by those "cartoons" were way, way ahead of their time. And one of the biggest influences in my work, is from Bubblegum Crisis. 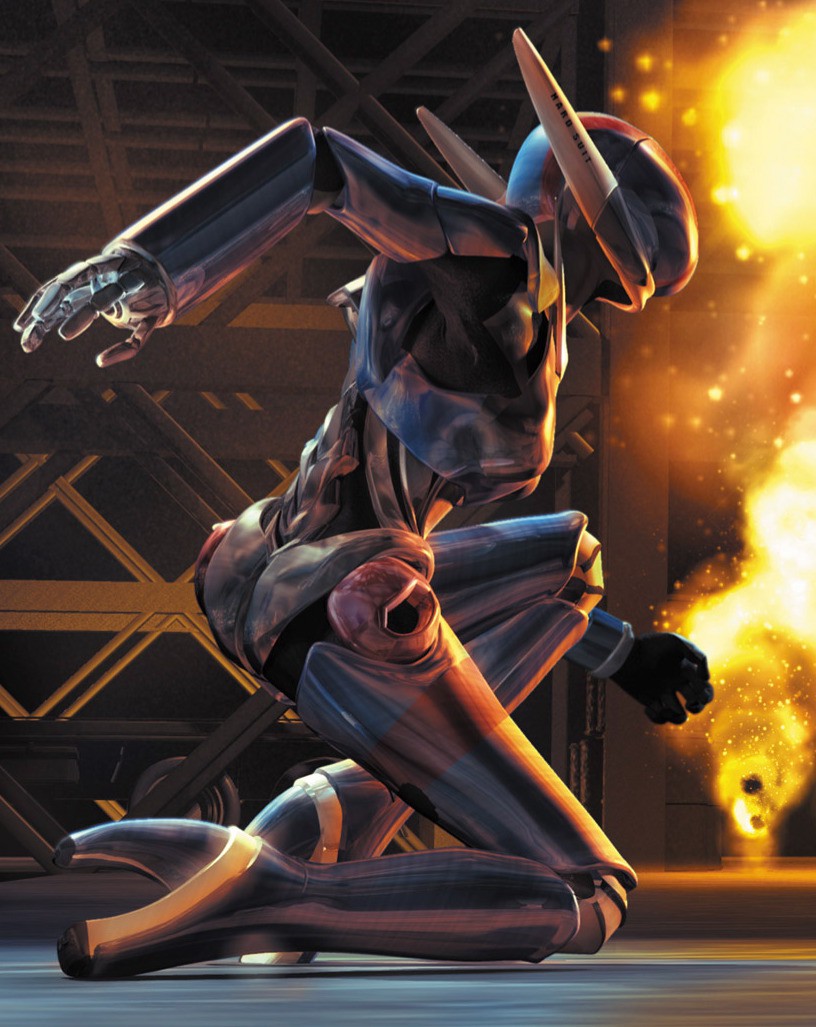 Bubblegum Crisis was a futuristic, bladerunneresque, cyberpunk series long before the concept of cyberpunk gained traction. That show gave me the concept of the human body sensor suit back in the 1980's. The series never defined what exactly went into the suit, but I took that science fiction anime visionary concept, and ran like a bat out of hell with it.

Since I'm a visual person, I work a lot better with pictures. I'm also a sketch artist, so as usual, I went to my sketch book, coloring pencils and paints, and this is what I came up with.

This is my grand vision for this concept. It's a unified, integrated, wearable body sensor suite that's unintrusive, and you can use it for controlling robots, VR, etc. It should record and replicate digitally the entire body's motions, forces, and physical parameters. 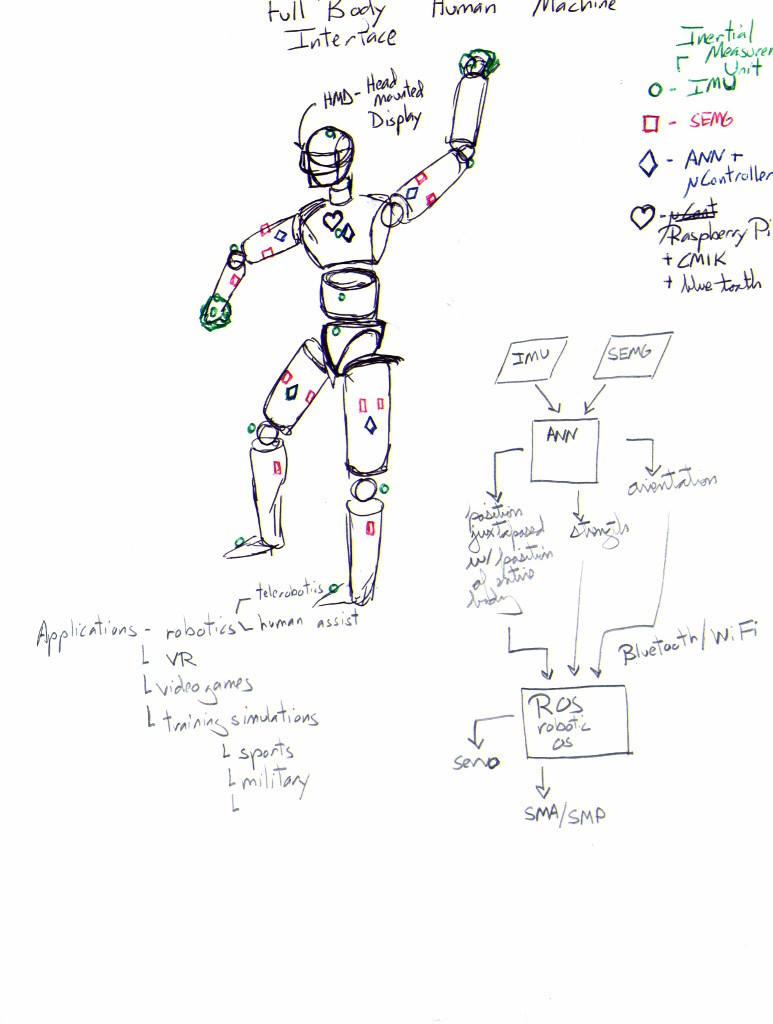 The Artificial Neural Network is what makes the suit "smart." The problem with technologies like SEMG, or IMU's, or accelerometers is that just by themselves, they're not going to give you an overall picture of what the body is doing when it's in movement or applying a force.

Take SEMG for example. All SEMG does is measure the amount of innervation/contraction activity that your muscles are doing. Notice I didn't say movement. Ever done isometrics? Bruce Lee was a great proponent of isometrics. 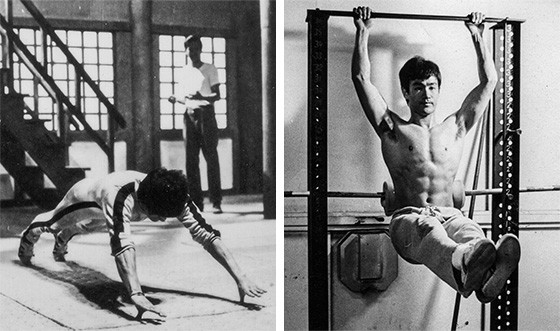 Isometrics is where you hold the limb or muscle in place, and contract the hell out of the muscle, without actually moving. Bruce Lee's one of the biggest role models of my life. If you ever read his biography, he's probably one of the first documented proponents of a high tech approach to combat conditioning.

Incorporating an Artificial Neural Network, and an array of sensors as a suit from the get go with a robotic operating system is a bit much to bite in the beginning. So, I scaled it down to something that I figured "should" be much more manageable for the near term. 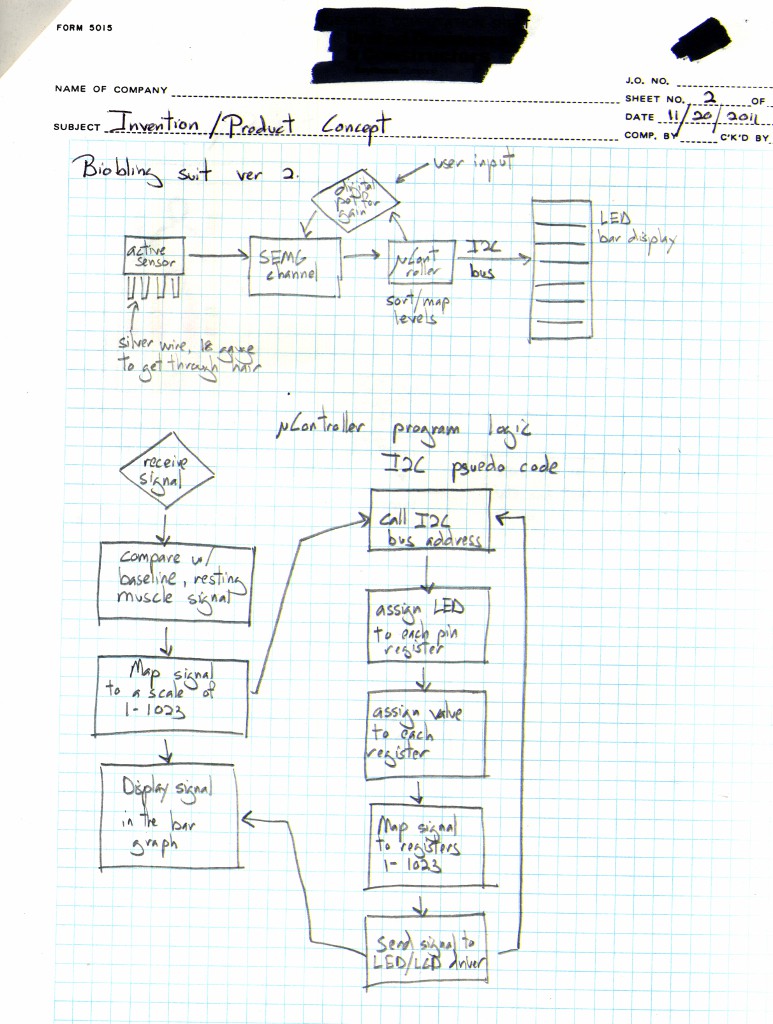 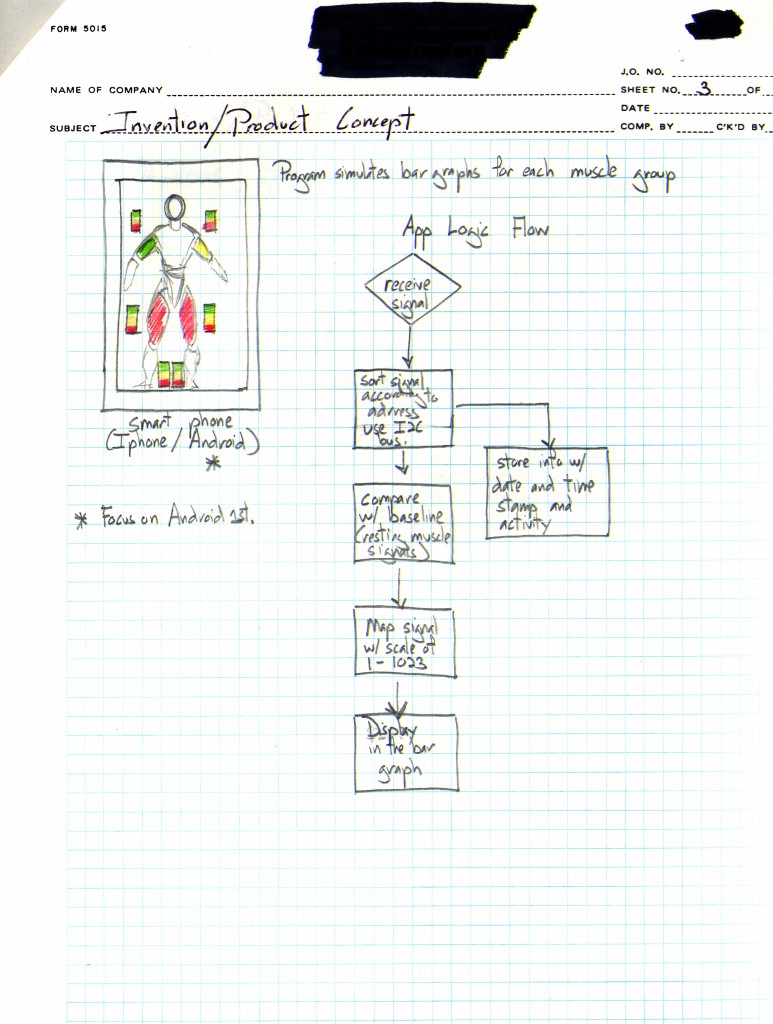 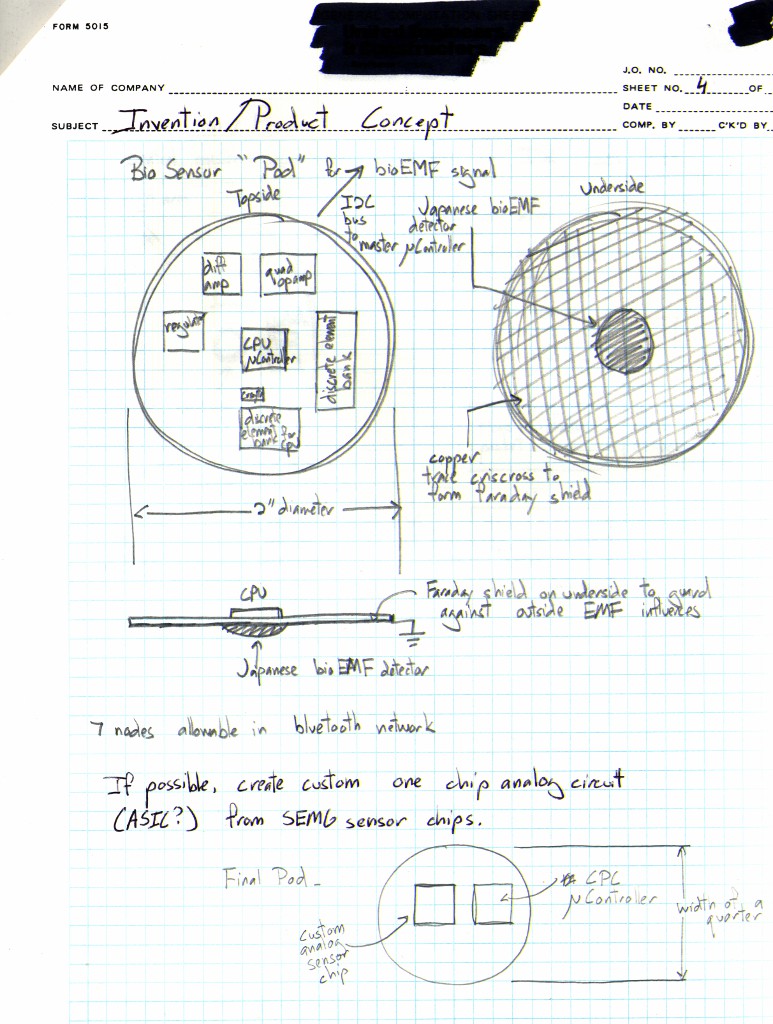 The system as a whole is a networked, decentralized, sensory platform. It's a lot like your spinal neural system, which operates off of reflex. Everything you feel, physical perception, to limb and skeletal muscular movement, to reflex, even autonomous movement internally, emanates from your spinal cord.

The end result of all this technobabble, the great vision, is to build a wearable, synthetic spinal neural network that senses your body's motion, physical condition, and muscles, and make that information useful for digital control of devices.

At the time, (2011) I should've gone with my very first instinct, which was to immediately start laying out the design, and manufacturing the pod for sale to interested people. I told my partner at the time that what I wanted to do was to make the pod as is, and start selling it at conventions, meetups, shoot, I'd sell it on the street from a White Van if I had to. - Side note, I was one of those saps who actually bought a set of speakers from two dudes in a White Van. Supposedly, it was one of those 90's/early 2000's scams. Those speakers ended up being one of the best sets of speakers I had ...

Anyway, instead of following my business instincts, I took his advice that we should "keep developing the product", to make it "venture backable", and I ended up getting jerked around for almost 4 years, while struggling to live off of less than 8k a year, and funding this with my entire savings. Show some skin in the game? How about subcutaneous tissue, and blood vessels too?

But I'll get into those business/startup lessons in another post. After getting the pod working, it obviously wasn't wearable enough, because let's face it. This was my soldered by hand, jumper wired in the basement, slagged on a piece of prototyping board, ghetto prototype.

What I needed was electronics layout and PCB fabrication, but for SOIC or SMD sized electronics. That would shrink the board by several orders of magnitude. I also needed to tweak the analog circuitry to be more lower power, more sensitive, and without some of the impedance issues I was running into. I also needed it to be cheaper. At $12 per chip, the INA106 Differential amplifier is a pricey piece of silicon, and it's the most expensive chip on the board. Every single one I got was via Texas Instrument's free sample program.

And I can't keep scamming TI for free INA106 chips. And forget that at a production level! This is where manufacturability starts creeping in, and you have to account for that. Other wise, you'll have an innovative, and expensive, piece of work that no one will buy.

So, while I'm a great rapid prototyper/designer/proof of concept technical artist, I sure as hell am not that great at the details and minutae of tricky analog electronics. And while I'm great at sketching out a circuit design, I'm not versed at all in PCB layout. Now that's an Art. For that, I went to an old friend of mine I graduated from BU with, who I consider one of the best analog electronics engineers on the East Coast, Al.

Al's the kind of person where you'll tell him what you want to pick up on when it comes to signals. You can tell it to him in a bar after a bunch of drinks. And right there, he'll whip out a napkin, and sketch out an op-amp/analog circuit design that will work the moment you implement it. He's that good. He's basically the Op-Amp whisperer, the Analog Ace. Naturally, Al puts those skills to good use and he works as an engineer at the Boston University Hearing Research Center. Al's also a veteran PCB board layout artist.

I'll find help where I need it. You should never be afraid to toss your idea out to people who can give you a hand. Even tossing out to people period is important just to get an idea if it'll have a market and serve a purpose. A lot of folks get tripped up by their egos or their paranoia.

You shouldn't be afraid to "lose" ideas or that someone will "steal" it. Fact is, real implementers are far and few in between, and you have to test the idea out with regular folks. Ideas are a dime a dozen. And, no one is the "perfect" "all knowing" god of all things. That's just impossible. When it comes to starting up a company, or developing a product, you have to toss that ego aside for the sake of pragmatism. Need help? Find it.

So, what Al and I did next, was take my hand crafted kludge, and turn it into a finer kind of circuitry wine...

Iterating the SEMG Sensor and Creating the Platform

A Lesson in SEMG and Analog Physiological Sensing Electronics.