In our hand, actuation is generated with only one motor and transmitted through tendon routing to the fingers with two separate, decoupled mechanisms: 1) A locking mechanism for the thumb and 2) A selectively lockable differential mechanism for the rest of the fingers. Two different tendon routing systems are used, each terminated to a different pulley, connected to the motor. The thumb pulley allows for smaller motor angular displacements to produce similar joint angle displacements with the other fingers. The diameters of the pulleys were selected to be the ones that score best in the Kapandji test [1]. 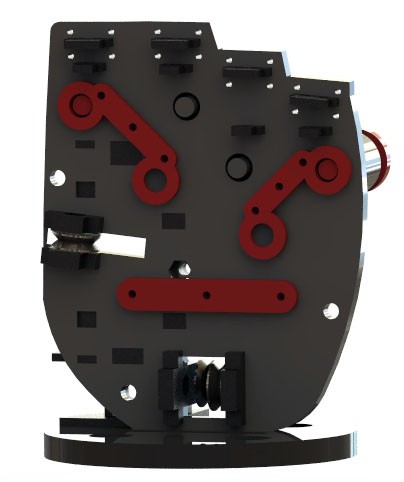 Thumb opposition is implemented using only one rotational DoF instead of three as in the human hand, thanks to the locking mechanism on which the thumb is mounted. This is a selectively lockable toothed mechanism that allows the orientation of the base frame of the thumb to be locked on 9 different angles. The choice for the 9 discrete positions was made so that the hand is able to attain the configurations described in the Kapandji test [1], allowing the user to switch between different grasping strategies, according to the task to be executed (e.g. key grasp or full grasp). The position of the base frame of the thumb and its range of motion, were derived in an anthropomorphic way following the methodology described in [2]. The proposed mechanism is completely stiff when locked, in contrast to friction based mechanisms [3] that are affected by torsional forces inherent in dynamic / unstructured environments (these forces can result to large, uncontrolled displacements of the thumb for these mechanisms).

For the rest of the fingers, actuation is transmitted through a differential mechanism which is essentially a variation of the whiffletree [4]. Our whiffletree consists of three bars: one bar connecting the index and middle fingers (bar1), one bar connecting the ring and pinky fingers (bar2) and the main bar that connects bar 1 and bar 2. This design allows only one motor to control multiple fingers in a coordinated fashion: a small linear displacement of the tendon causes a proportional angular displacement at all robot joints. This way, even upon contact of one finger with the environment or the object surface, the motion of the fingers that remain unconstrained is not blocked but facilitated.

At the same time, the mechanism allows the user to pick different configurations in an intuitive manner: The top two bars have appropriately designed holes and the palm accommodates a set of buttons that upon pressing are elongated. When a button is pressed the elongated part fills the corresponding finger hole and the motion of this particular finger is constrained. A total of 2^4 = 16 different finger combinations can be implemented using the differential mechanism and a single motor, which combined with the 9 discrete positions of the thumb, produce a total of 144 different grasping postures.

The major advantages of this mechanism are its dexterity (144 grasping postures), achieved with only one motor and its simplicity of use (simple buttons allow for intuitive switching between different postures). Our design outperforms other implementations of the whiffletree [3] on hand design through its low mechanical complexity, ease of fabrication and intuitive use.