Repurposing a 96x16 flip-dot bus sign to display a 24 hours history of the Anti-proton Decelerator performances.

The Anti-proton decelerator is a synchrotron made to lower the momentum of up to 35 millions anti-protons per cycle from 3.5GeV/c down to 100MeV/c (or 5.3MeV of kinetic energy).
This machine needs a display to summarize its daily performances, with style. Flip-dot displays are highly visible, reliable, a bit noisy and entertaining.
The challenge is:
- Repair the faulty display found on eBay
- Understand the display serial protocol
- Make a control program, and integrate it on the synchrotron control architecture.
Please expand all the details for the full story.
And for a tour inside the AD : https://pierremuth.wordpress.com/2018/03/08/anti-proton-decelerator-quick-tour/

The Anti-proton Decelerator (AD) relies on the same versatile synchrotron chain as the Large Hadron Collider (LHC) to produce Anti-protons.

A linear accelerator plus two synchrotrons are needed to accelerate protons up to 26GeV/c. These multi-purpose accelerators are the Linac2, the Proton-Synchrotron Booster (PSB) and the almost 70 year old Proton-Synchrotron (PS). The 26GeV/c proton beam extracted from the PS impacts the AD target and the nuclear interaction between the proton beam and the spallation material of the target (iridium at the present time) are responsible for the production of the secondary particles (among which anti-protons). The secondary particles emerge from the target with a given momentum and angular distribution, and the charged particles entering the magnetic volume generated in the 400kA (kilo-amps) pulsed horn can be deviated into a parallel beam [1].

Around 1.4E13 protons from the PS are needed to inject approximately 4E7 anti-protons in the AD synchrotron.

The purpose of the AD, and more precisely its low energy anti-protons produced, is anti-matter studies. Currently the AD serves several experiments that are studying antimatter and its properties: ALPHA, ASACUSA, ATRAP and BASE. Two other experiments, AEGIS and GBAR, are preparing to study the effects of gravity on antimatter. GBAR will be the first experiment to use antiprotons prepared by ELENA, the new decelerator [4].

As we saw, this anti-proton machine relies on multiple complex processes. There is a huge control infrastructure in order to drive it. For example, it is provided for operation some status fix screens, a lot of applications (software) running on the operation workstations, measurement instruments, etc...

While there are statistics applications in order to analyse the long term performances of the AD, no fix display showing these data were present in the AD control room.

So the aim of this project is to fill the needs of a fast viewing screen, showing the performance of the AD over the last 24h.

Yet receiving a 96x16 flip-dot display found an eBay is a challenge. It results a 1.80 meters long package traveling from England! Unfortunately this display needed some repairs. It passed the self tests but soon some part of the display start to malfunction. (hey, I knew why it was on eBay and relatively cheap)

So lets open it and try to figure out some working principle.

The sign was made by hanover display, and is composed of 3 panels of 16x32 dots. They are controlled by another board housing a 68000 type micro-controller.

After some googling and readings of the datasheet of the components present on the board, it seems that each panels are driven by some rather 'common' type of signals. Such as sync clocks and data to control the counters and shift registers present on the PCB. 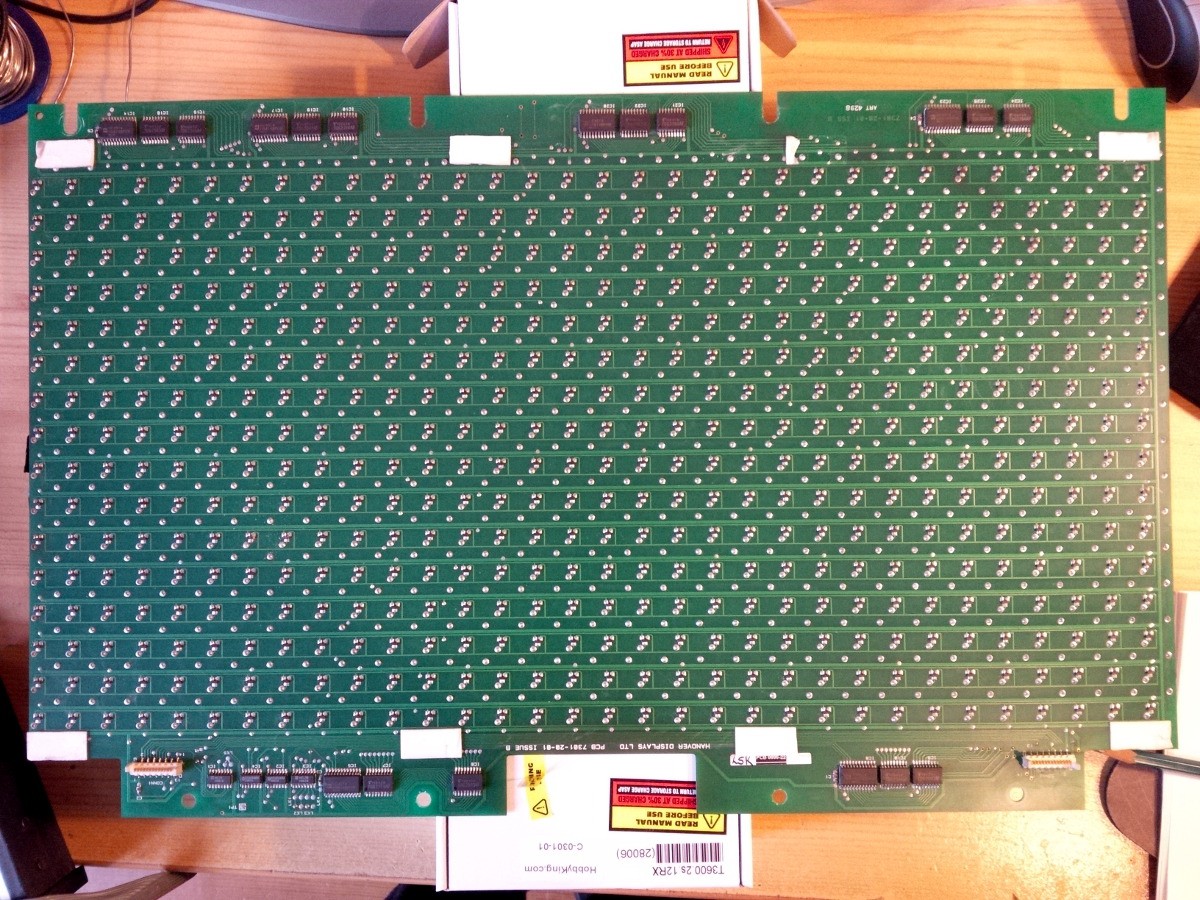 It appears that one of the CD4042 binary counter were fried. Maybe an over voltage ? Anyway, I realized back at that time, the surface mounted components were glued before soldering. But after some...

Use microscopy to figure out, how modern displays works.
Project Owner Contributor

Yet Another Seven Segment Display