to write about Megapixy is to write about the last 2 years. this project has tested my patience and perfectionism and pursuit of beauty as few have.

Megapixy was an adventure in sourcing parts. it was my first self-directed surface-mount PCB design, my first try at soldering QFN & DFN packages, my first attempt to route high-speed differential signals, my first non-Analog system design.

Megapixy was my first lasercut design. it birthed my Eagle-mechanical workflow and represents my highest level of electro-mechanical integration to date.

let's say you were to build a small music studio. wouldn't it be great to have a small laptop-sized screen above the MIDI keyboard, so you could see what you were doing?

it turns out that hardly anyone makes nice small screens. Lenovo makes an awful battery-powered thing called the LT1421, with terrible colors, terrible brightness & contrast, USB-input only and pixels the size of your head. there's also this other thing with equally bad contrast and colors and general DGAF-ness. this was 2013 - the Retina iPad was just a few months old, and 1080p screens were finally beginning to trickle into Windows laptops. i would settle for nothing less.

the solution, of course, was to build something. i zoomed around the internet looking for laptops with good screens, bumped into the (otherwise uninteresting) Dell L502x, and identified its LCD panel as an AU Optronics B156HW1. a quick trip to eBay nabbed that and an HDMI-compatible control board to drive the panel, and i was in business. 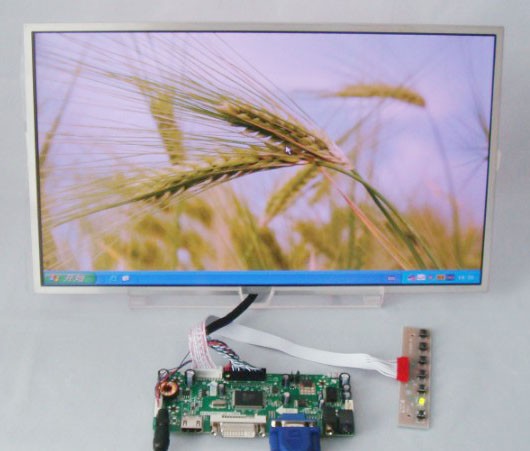 [this is really the best picture i could find.]

it works as well as you'd expect from a generic off-the-shelf solution. it turns on and it's definitely a screen, but you won't feel any joy in it.

a screen is only useful in front of your face, so i slapped together a chassis. having hardly any tools in 2013, i asked a frame shop to frame the LCD panel like a painting, and built the rest of the chassis to screw into the rear of the frame. 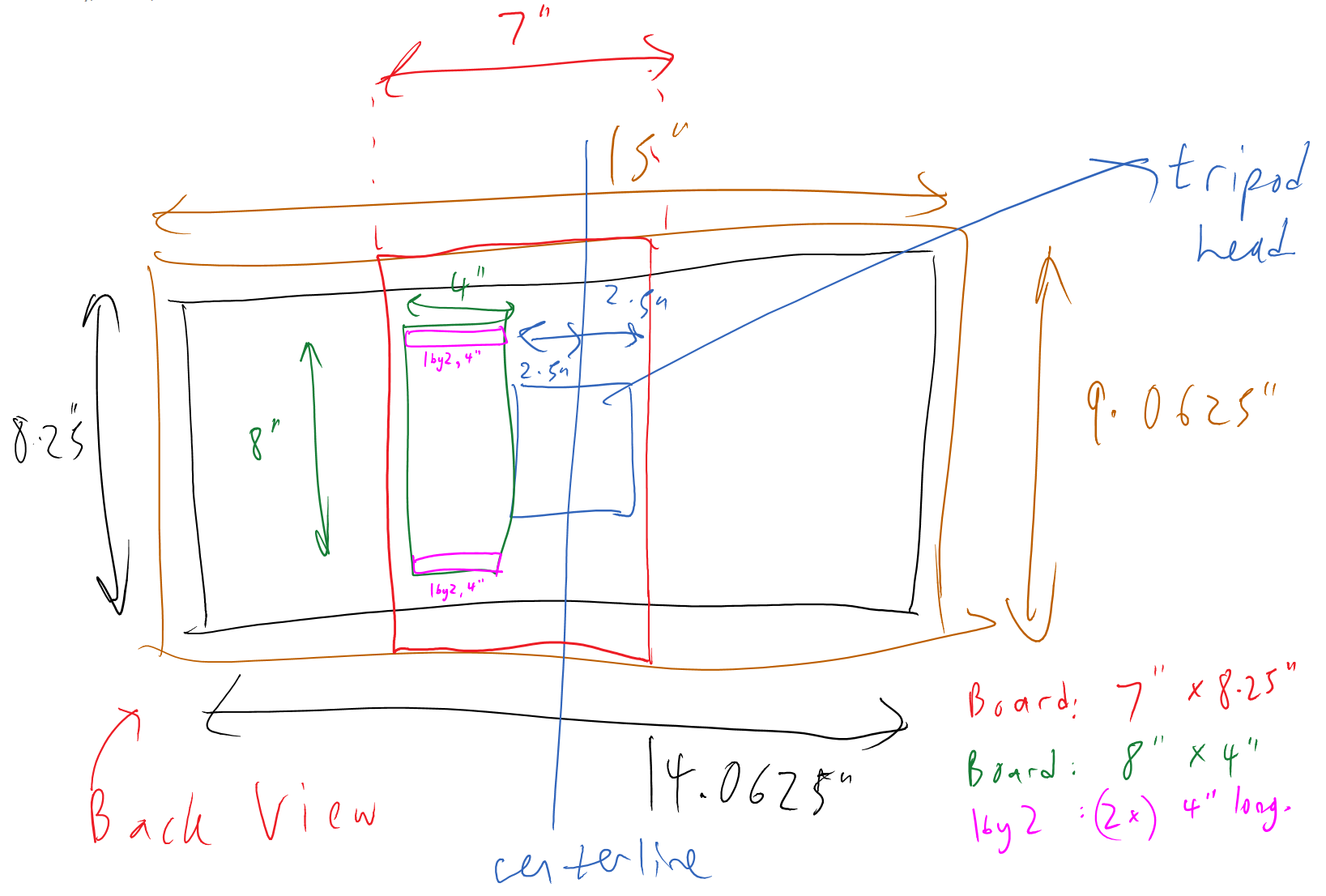 after much drilling, sawing, gluing & screwing: 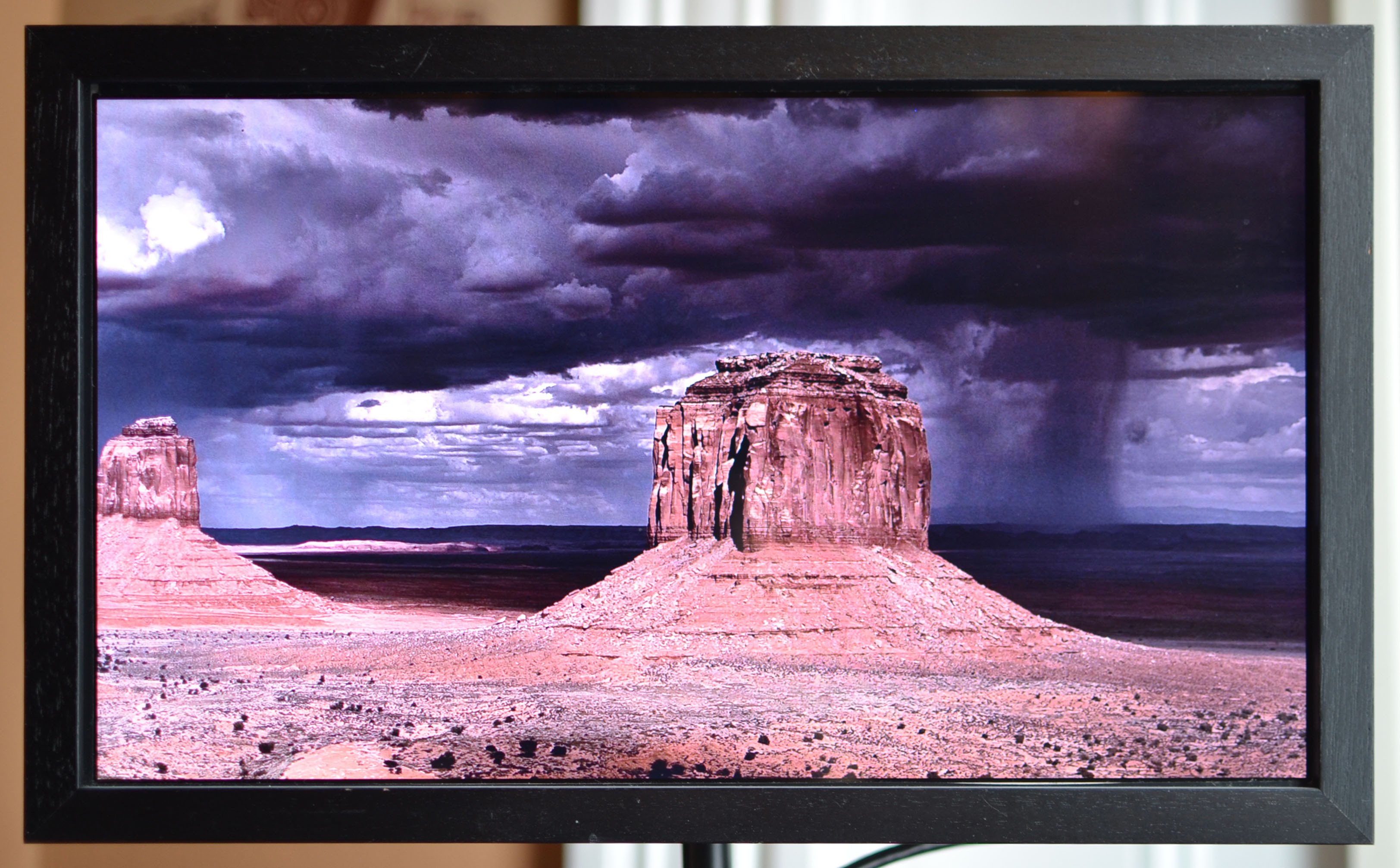 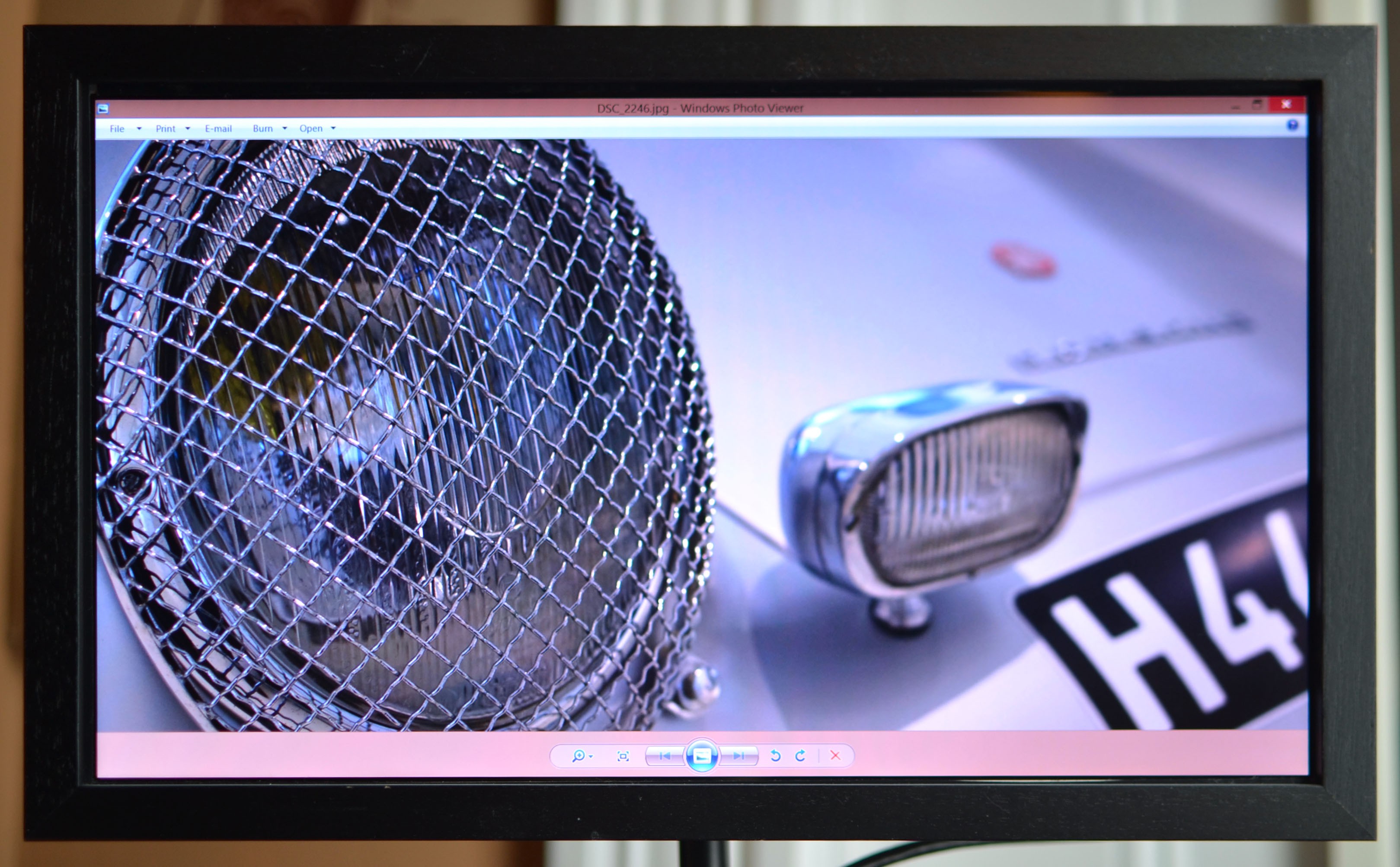 [but those colors are definitely off.] 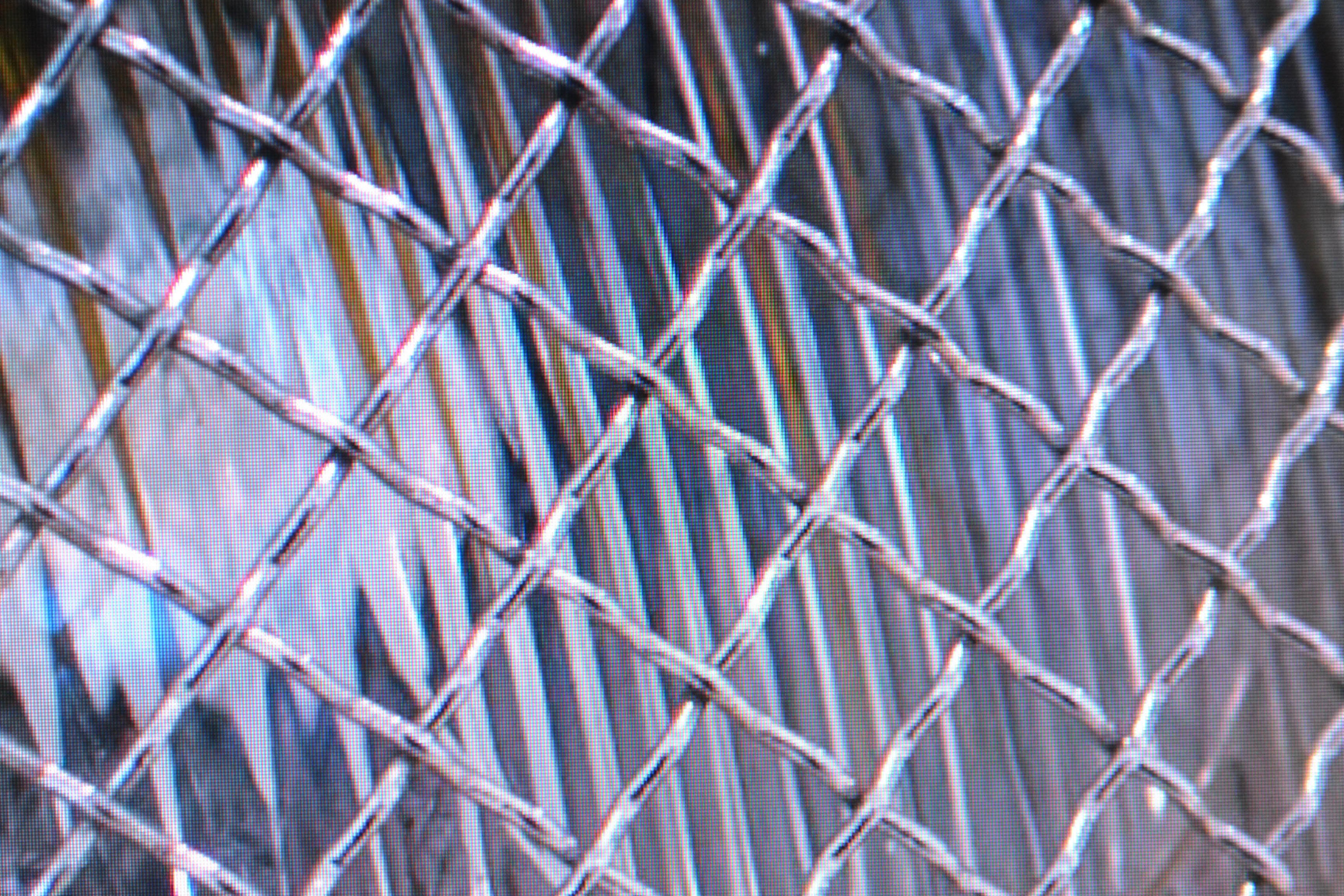 [and those pixels are still pretty pixelly.] 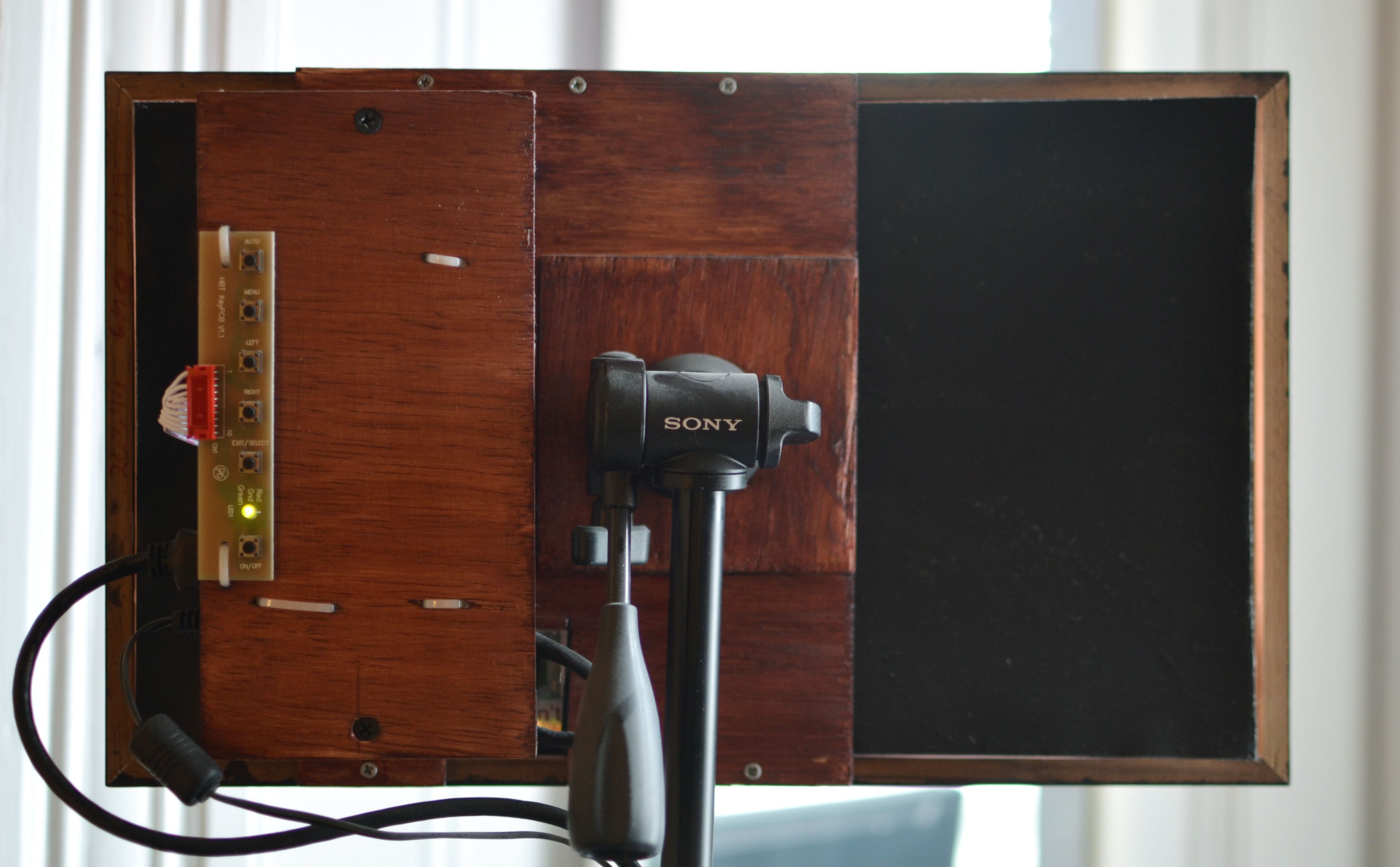 no seriously, why do all monitor controls suck? even the most crazy-expensive professional LCD monitors use a row of identical, nasty-clicky buttons. you have to look at them since they all feel the same, but you also have to look at the screen to see your on-screen settings. so your eyes will dash back and forth, between buttons and screen, until the controls time-out and the on-screen settings vanish. and then you'll have to start over.

*cue much wailing & gnashing of teeth* isn't this crazy? doesn't this drive you nuts? am i just weird?

i mean, your computer's operating system already has color, brightness and gamma controls. the advice of professionals is to keep your screen unadjusted (except for brightness) and do all adjustments in software. why do our screens need anything beyond a power button and brightness control?

and how can i make a better screen without relying on someone else's crappy control board?

then someone clued me in on a very interesting Hack-A-Day article, and i started thinking very hard. one thing was clear - embedded Displayport (eDP) was the way forward, and everything else was a sideshow.

i promptly forgot about the music studio, and started tackling this for reals.

next update: hacking the Retina iPad.

I have to agree with crazy and nuts. Also, I tend to lean in hunched over and squinting, which is not my ideal viewing distance for making adjustments. The only thing more crazy than that, are manufactures who think Linux is a joke, or an entire planet that is OK with royalty fees for common connector usage. My hope is that these monitor controls move on screen as touchscreens become more prominent, and my fear is the touch controls will end up looking like an exact picture of the "row of identical nasty-clicky buttons." :( I hope your next log is a step towards solving the viewing angles and lack of pixels :)