By far the most significant change in the circuit is the RIAA equalization filter. It is still passive, it still sits between the two gain stages, but the values have been changed and it has shed one component.

The results are nothing less than spectacular.
Read on to find out how this circuit has a RIAA accuracy of less than +/- 0.025 dB from 1 Hz to 100 kHz! 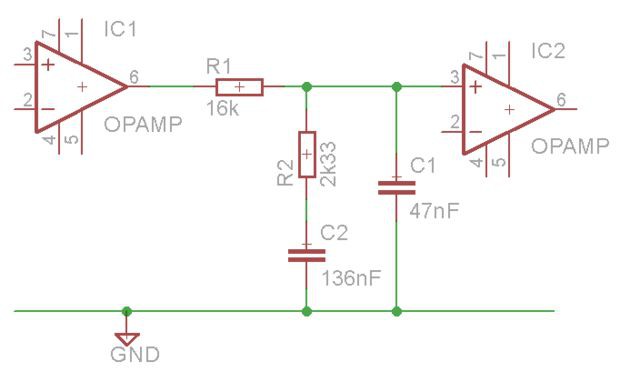 This is the schematic for the passive RIAA filter.

Why was it changed? Four reasons:

The Muffsy PP-2 uses these instead:

First of all, all the component values for the Muffsy PP-2 are completely standard. We're not moving outside of the E24-series of resistors for the whole project, and the RIAA capacitor values have been changed from three to two different values.

Third, R1, which is a part of the signal path, is 50% higher in the CNC circuit. A lower value will give less resistor noise and less attenuation of the signal.

Making a lower resistance RIAA filter makes it more dependent on the impedances before and after the stage. Luckily, we have opamps in both ends that ensures stable operation.

A passive RIAA filter will attenuate the signal nonetheless, which is why we have the first gain stage. Then the signal won't be completely lost in the filter.

What's more, the attenuation in the RIAA filter is higher as the frequency increases. Which is a very welcomed feature indeed. That means that high frequency noise is completely removed by the filter before the last gain stage.

We've dealt with three of the goals, now how about the component values that were chosen?

With some careful measurements and component matching, it will be possible to match the ideal values. Doing so will give less than 0.001 dB deviation from the RIAA curve.

What happens then, with the chosen values in this circuit? You're going to see that it's not at all shabby. Let's simulate it in Spice:

What we're seeing here is the deviation from the RIAA curve in milli-dB, using the components we have chosen. One milli-dB is one thousandth of a deciBel, from 1 Hz to 100 kHz.

Of course, this is all academical. It is just the RIAA filter and none of the other components. So let's go ahead and simulate the full circuit:

The opamps perform very well, as expected. It is safe to say that the RIAA accuracy with the actual chosen component values is +/-0.023 dB, within the audible band.

That's pretty much a straight line from 1 Hz to 100.000 Hz. Many well regarded phono stages have deviations that would extend outside of this graph.

The Muffsy phono stage performs very well indeed. And it's all done with standard component values, so you don't have to hunt down esoteric components.

We have discussed the basic functions of the phono stage in other project notes. Now that the simulations are ready, let's have a look at them again:

The green graph at the bottom is the input signal from your record player. This is what's on your LP, and that gets sent to the phono preamp.

The red graph is the amplified input signal. It still looks the same, but it has a higher level. That's because the RIAA equalization circuit dampens the signal, and we want to keep the signal to noise ratio at a decent level.

The brown graph is when the RIAA equalization has been applied. As you can see, it flattens the signal from your record so it's the same level across all frequencies.

The pink graph is the final result of the phono preamp. It has now been amplified, equalized and amplified again to a level that is usable for your main amplifier.

A Phono Stage is Soldered