Blecky •03/24/2015 at 11:34
The SubPos Wi-Fi Positioning System is an indoor positioning system that can be used in various environments such as metro lines, shopping malls, carparks, art galleries or even conference centers; essentially anywhere GPS doesn't penetrate. It could also be integrated into an array of IoT enabled devices, from access points to Wi-Fi enabled light-bulbs.

The Standard defines an accurate method for subterraneous positioning in different environments by exploiting all the capabilities of Wi-Fi. SubPos Nodes or existing Wi-Fi access points are used to transmit encoded information in a standard Wi-Fi beacon frame which is then used for position trilateration. The Nodes, while not necessary part of the SubPos standard, provide a pre-calibrated device that is easy to configure and can be dotted about with ease.

When a user enters an area littered with one or more SubPos Nodes, they are able to determine their position with a simple smartphone application. Some smartphone applications could include helping users find their parking spot, navigating unfamiliar buildings or determining whether your metro station is soon approaching. It could even be used as a GPS relay for embedded systems.

Unlike traditional Wi-Fi location techniques, which map out an area of Wi-Fi signal strengths while storing it in a database, SubPos Nodes operate much like GPS satellites. In this case however, instead of using precise timing (for time of flight) to calculate distance between a transmitter and receiver (GPS), SubPos uses coded transmitter information as well as the client's received signal strength to determine the distance from this known point. 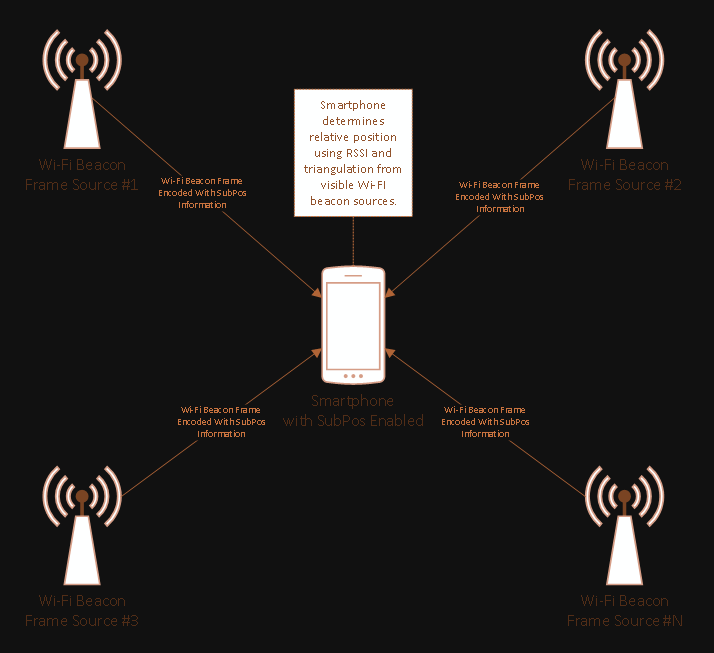 The transmitter's (beacon frame source) position information is coded into the Wi-Fi beacon frame that is sent by a Node to produce a known location (this technique is also known as beacon stuffing). This position can either be in a decimal degrees latitude and longitude value with altitude, or x,y,z centimeters from a zero offset (useful for mapping to floor plans), selectable by the application developer. Consideration should be made when planning optimal placement of the Nodes, but this will generally be dictated by existing infrastructure (if utilising access points), building limitations or power source requirements. Current testing has been made with placement around the border of a room, with at least a Node located in each corner. Ultimately, the greater the number of installed and configured Nodes, the better your positional accuracy (from trilateration) will be.

Since beacon frames (management frames) are always sent at the lowest mandatory speed for the networks the access point is advertising (or beacon frame source in this instance), there is no need to calibrate the RSSI based on the speed the network is running at (the RSSI will change if the speed changes for general data frames). In this case, you do not get any variation in RSSI on the client side from a set of beacon sources with the same settings, e.g. lowest supported speed of 1mbps (except for distance from the frame source). Try it for yourself:

Once in place, this then allows a client to use the calculated distance from the transmitter to the receiver, as well as the position of one or mode Nodes, to easily determine its own position. All of this is performed without the need for data connectivity as it's determined purely with the information received from visible Nodes. No more sending your position to external location providers when navigating indoors. Since this is a purely client side positioning system, location latency is also significantly reduced.

Additional analysis techniques, such as averaging (median filters), frequency (spread spectrum hopping and wider bandwidth modes e.g. wireless n/ac) and spacial diversity as well as accurate beacon timing, are also being combined together and tested to resolve even greater accuracy.

The positioning information of the access points/Nodes is coded into the SSID as follows (more information about the coding is available in the SubPos Standard): 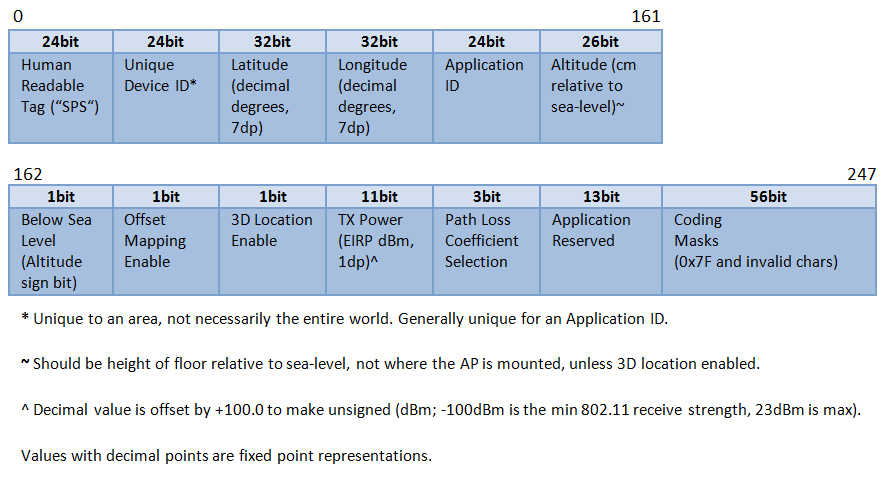 To make use of this passive positioning information, SubPos also implements an easy to use Smartphone API, that allows application developers to integrate SubPos into their application designs, which provides easy to use indoor location services for their users.

To integrate SubPos into an existing Android positioning application, all you need to do is initialise the API like so:

Then to get your position, call:

This information can easily be displayed on any mapping API: 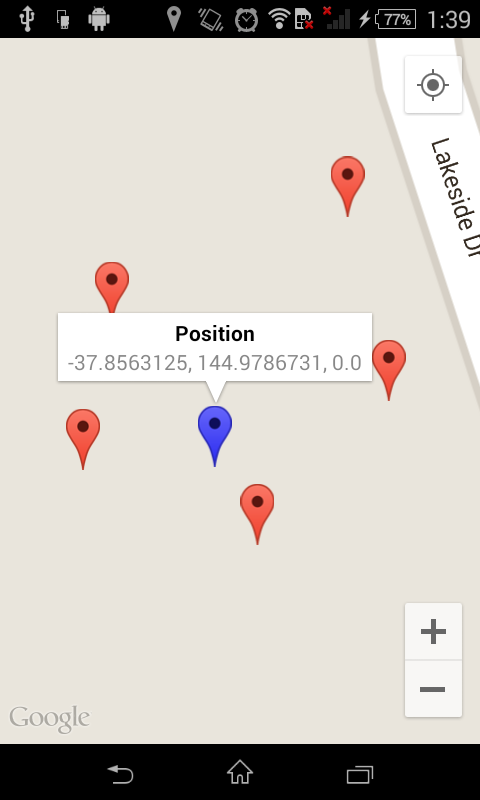 The Nodes themselves also provide an intuitive and pre-calibrated beacon frame source that can be set up with ease via a UART/Serial connection. The serial interface allows users to enter the Node's installed position information, environment details and application identifier. Once configured, the device automatically does the rest: 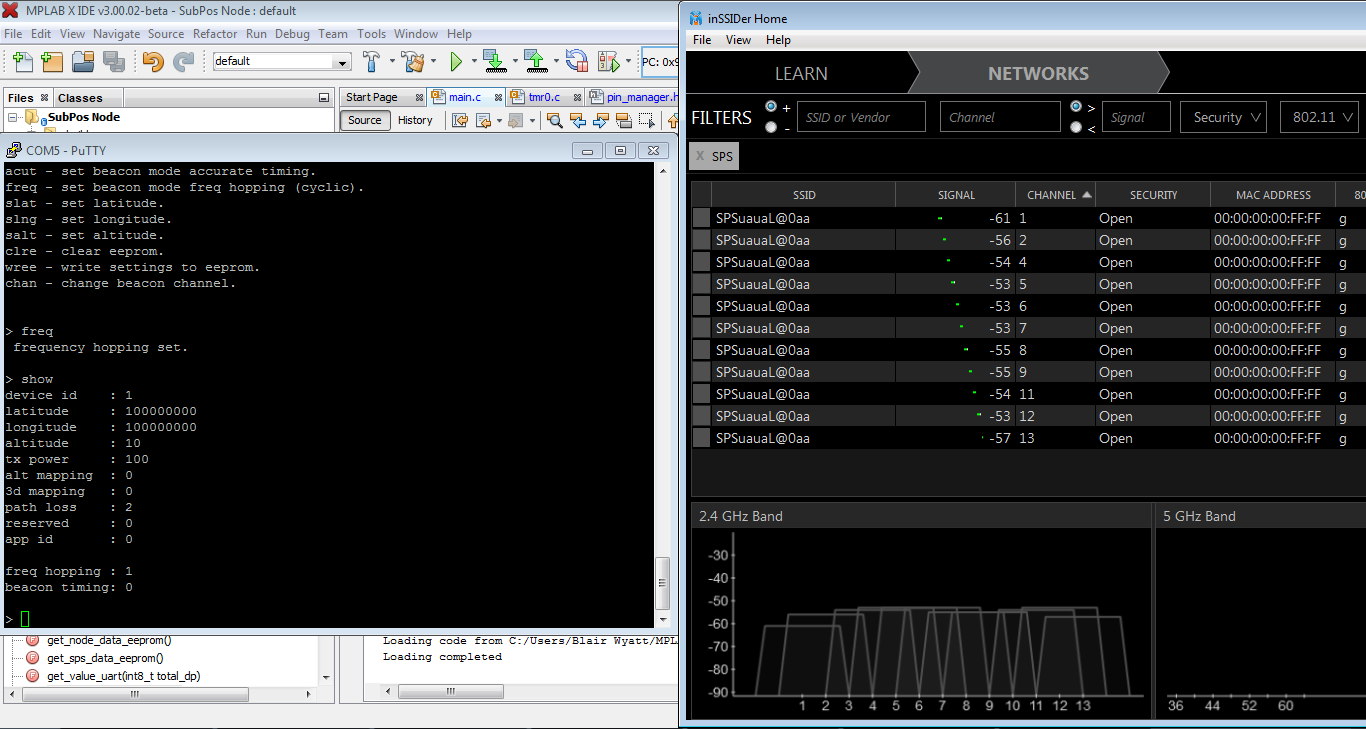 Further improvements are still being made to allow for more user friendly operation of the Nodes. The revision 03 Nodes are now complete. These include a microUSB interface for power as well as communications, and allow for user upgrades of firmware (both the ESP module and microcontroller) via a single USB connection and an optional altimeter as well as accelerometer/compass. Further firmware improvements will continue to be developed to help increase accuracy and provide any additional features as necessary, such as Node position self-learning, from an existing constellation of Nodes and the ability to remotely configure Nodes to update them once installed (switch them to configure mode via a button; for security reasons this should be manual). Future work will also include the development of a SubPos receiver that can be connected to autonomous indoor drones or other devices and will offer time of flight and faster frequency shifting. 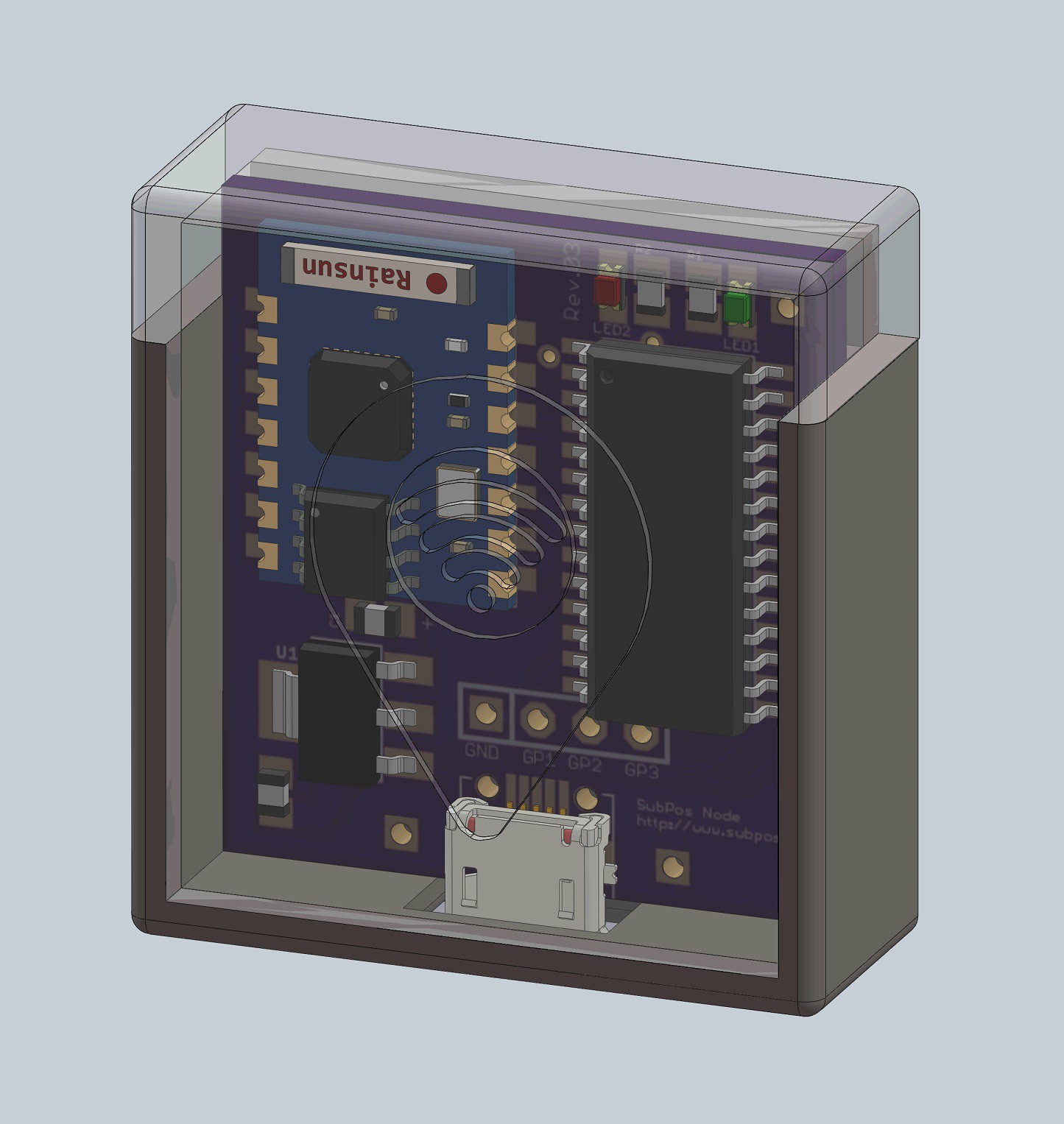 The SubPos standard, SubPos Nodes (except Rev03) and the SubPos Android API are currently complete and have been verified and tested to allow users to obtain their position when surrounded by any number of SubPos Nodes. The accuracy of the system has been tested with 8 operational Nodes as well as the Android API, and has given a result of +-0.5 meters with averaging in an underground carpark: 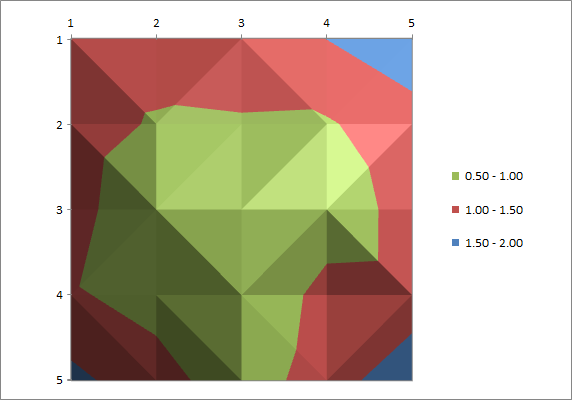 Further testing is to be made with accurate beacon timing enabled (beacons sent exactly every x ms). As it stands though, the overall development of SubPos is complete and productisation is underway to improve the installation experience and develop standardised testing for better calibration of the installed system.

If you would like to register your SubPos based positioning application against a unique SubPos Application ID, please email register@subpos.org. Include details about the application's name, which platforms it will be used for, its purpose and a link to the homepage (this can be the App store link for example) and you shall be granted a wonderful ID that you can use to your heart's content.