The idea is to take the water used in a shower to use for flushing the toilet, there is no sense in using drinkable water for that

The idea is to take the water used in a shower to use for flushing the toilet (or any other suitable purpose), there is no sense in using drinkable water for that. I don´t have a garden or any other use for "gray water" (Thanks Greg Kennedy for the tip), although it could eventually be added to the design; so the only use for the moment is to flush the toilet.
Video: http://youtu.be/FhQKCfvnlmc 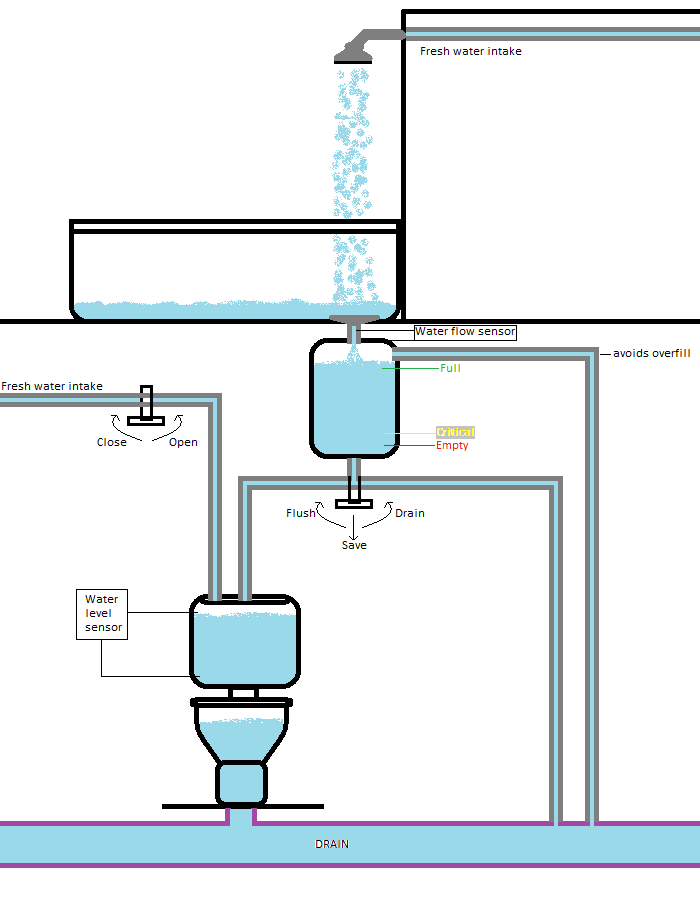 Great way to re purpose your water.  I know of some people that have a bucket collecting drinkable water while the wait for the water to get warm and later use it for gardening.

thanks, i saw your project, it looks great. This kind of projects don't get much attention now because people have water in their homes and don't think ahead...

wow exactly what I was planning to do, except that I need an extra pump to pump gray water to the toilet. Also I wouldn't put the fresh water intake and the graywater on one system, you should keep it separated (It's even forbidden to do that in my country, but they have no way of knowing except if there is a bacteria outbreak).

Just run the freshwater intake directly to the toilet and place a small buffer tank in between.

Thanks for the input, i drew that as an schematic, but the fresh water enters through the existing toilet connection and the gray water would enter through a different new connection.

The number of pumps needed would depend on the location of the bath and the toilet..

The ideal case would be a new house where you can take this system into account when building it.

Thanks!, i´ll look into it.

"Gray water" is the term you are looking for.  See also: watering your lawn with used laundry water, etc

Because soil is so overrated, seriously.
Project Owner Contributor