Back in 2015 when this all started, the complexity of this work was acknowledged and the project was one of the 10 finalists in the Hackaday Prize 2015 and also a BestProduct finalist. The year comes back to my mind with so many beautiful memories. By the time I was working on this project, it was the hot summer of 2015, my daughter was a few months old and while learning to be a dad I was also investing energy into making this project happen. Life unfolding itself right before my eyes, with only determined will to guide its outcome. Then thanks to @Sophi Kravitz and the other amazing people at Hackaday I had the chance to be a speaker at the #Hackaday SuperConference 2015.

My message there was about the need to move from a hobby to something that actually has a purpose. This is an issue with makers in general, as most of us love to start many things, and finalise none.
Personally, I am a very determined person. My final goal goes beyond the little things, and probably this works as the perfect motivation. Some on that here.

The "Portable Environmental Monitor" didn't win any of the fabulous prizes of the competition, yet this didn't stop me from finalising it. It took a lot of time as it's 2017 already, I had to find the resources for what it became a highly complex project, while keeping my startup company going. With enough will , the work finally came to a result.

The Hackaday Prize helped a lot! The feedback of the jury, expressed publicly, boosted the exposure to Mars and back. Here's Dave Jones' mailbag:

Then Ben Krasnow & Pete Dokter as part of the Hackaday Prize 2015 Jury feedback:

The amazing HaD people which I was delighted to meet in person, after their amazing articles on my previous work:

Mike, Brian, Adam, and all the rest, thanks for your support over all this time.

People at Atmel and Bosch were also supportive during all this time.

You made things so much better and I am grateful.

But, this is a project log, so let me show you the other technical details that kept me busy.

Following the successful indieGogo campaign I was telling you in the previous log, the promised stretch goals were added to the design. This included a slot for an SDCARD to save huge amounts of data offline, a GPS module to map location and a RTC IC. As a result, there were 5 revisions of the PCB, see them here:

The Wifi antenna was changed to an internal, ceramic one, and it was interesting to find solutions on getting the RF field out of the aluminium enclosure. With some carefully designed openings, this became possible. If you read the comments section below, you'll see this feature was initially requested by Ben, and I loved the idea as it makes the design more compact.

Hardware needs software. From about 3000 lines of firmware code at the end of 2015, the firmware got up to about 9000. The rushed code written before the Hackaday Prize challenges was properly rewritten, so it would handle sensor readings, an UI, user touch readings and data synchronisation over the Internet. All this on an 8bit microcontroller, upgraded from Atmega128 to the better Atmega2561. 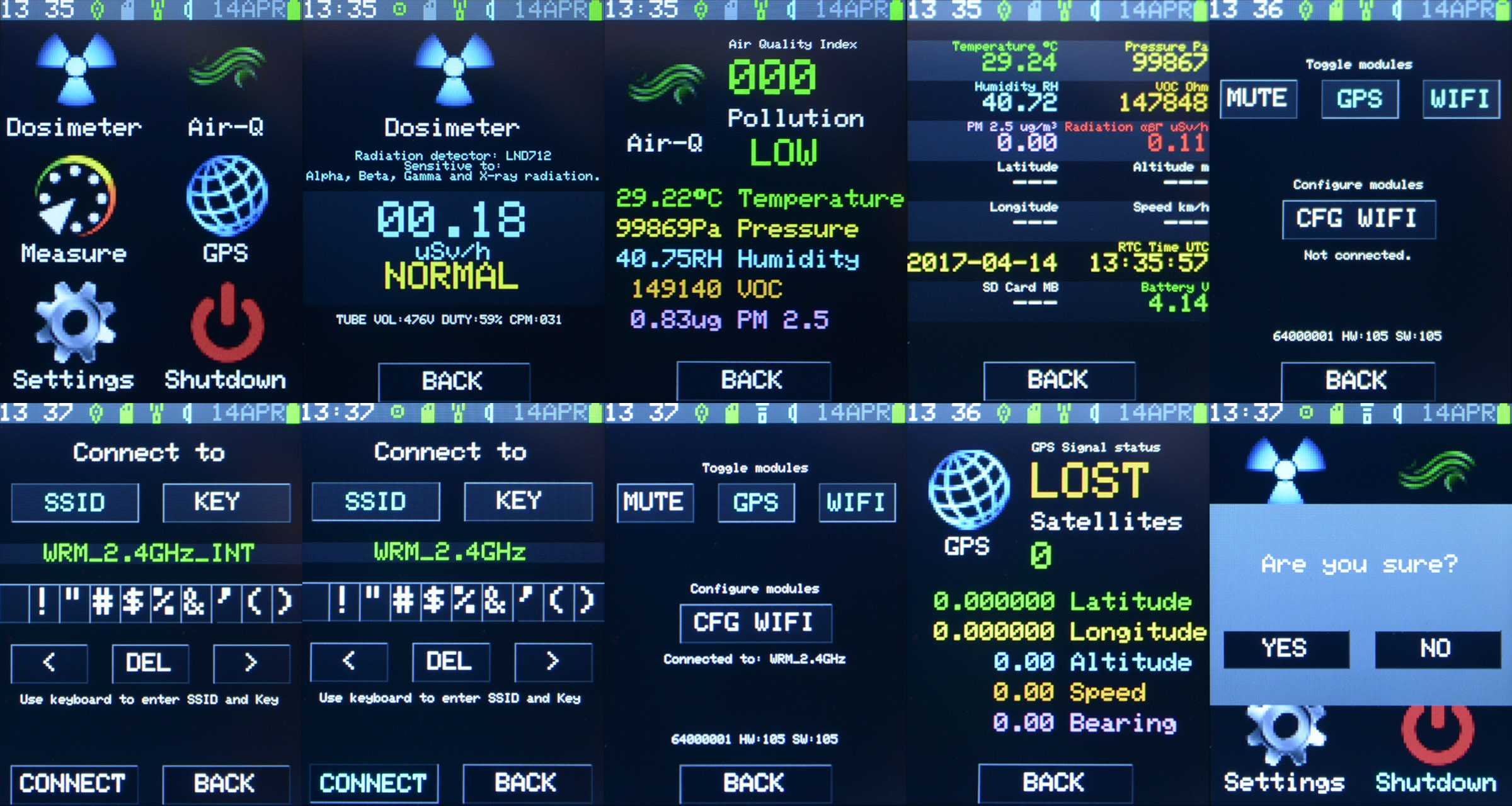 To configure the Wifi settings, I implemented a software keyboard. Reminded me of the good old embedded development years on Windows Mobile.

Don't forget this work is linked to the bigger uRADMonitor project, where several IOT devices are used to do measurements and centralise all data online. As the #Portable environmental monitor is a mobile unit, support for mobile units had to be added. This happened nicely, in a good moment, coming to complement the already existing #uRADMonitor A3 units installed in public transportation in the first Romanian smart city, Alba Iulia.

Unit manangement was added , so unit users have control over their hardware. The section for that was called the Dashboard:

Back to hardware, but not electronics, a plastic bezel had to be manufactured to hold the LCD in place. Then , after the GPS addon, a new plastic cover for the antenna was needed. Design for this went smoothly,

To serve the first production batch, a limited quantity had to be ordered, so making a mold was not an option. What I did was to find alternatives:

It took a lot of work to get things here. There were times I felt the pressure of this project, seeming impossible to complete. I knew I had to keep moving. Finally, the work is done , and a new IOT gadget is available on the market, impacting pollution and the quality of life, with measurements from all around the work, making the invisible harmful factors, visible. 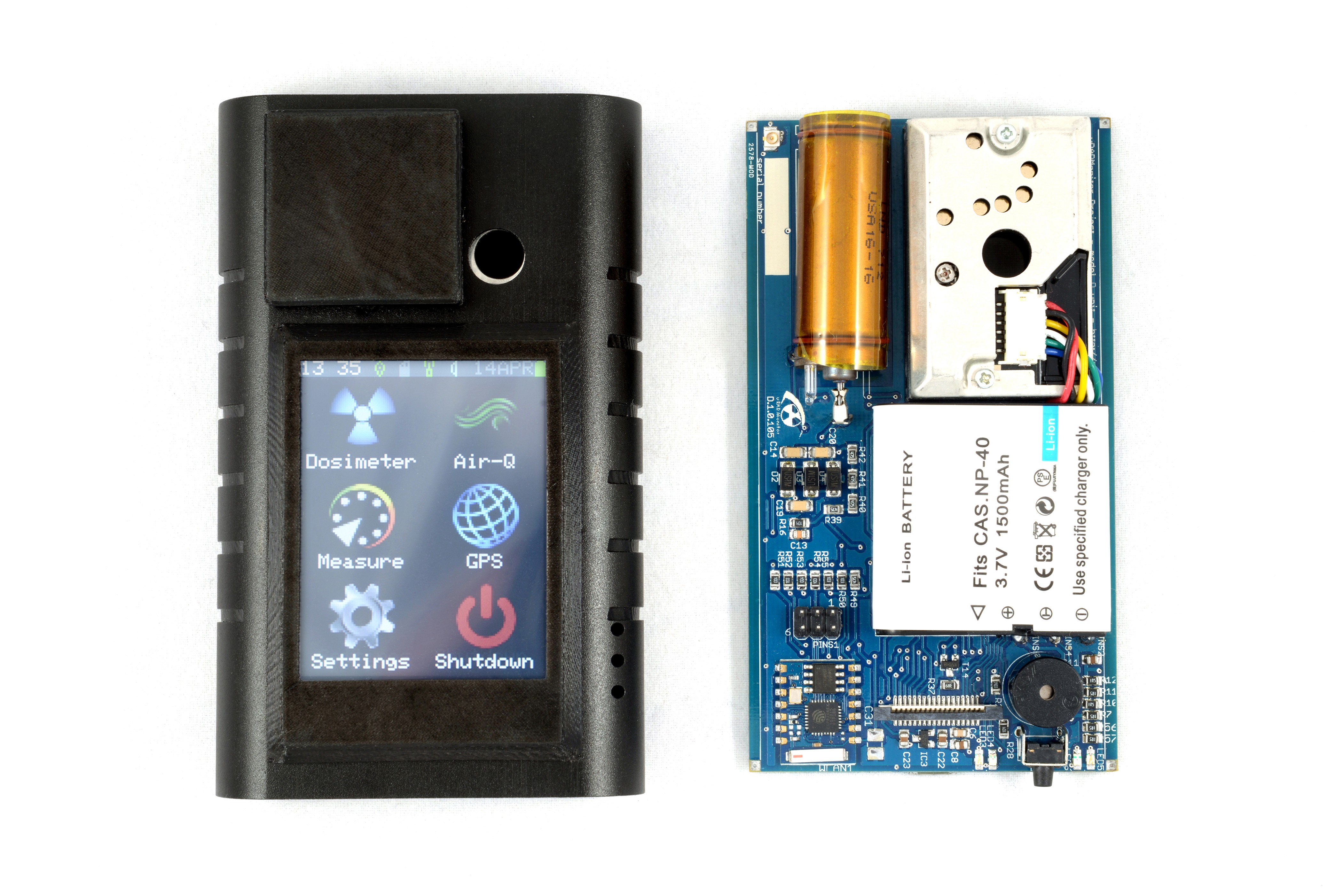 Now that this project is done, I'll finally be able to move on, to other exciting preocuupations.

Going for the feedback