I have been working really hard to finish up the mk3 prototype while I have been back in Australia. This has been a pretty intensive process as this is a completely different vehicle from the earlier prototypes. In a few short months I have had to design, source components, and build this new vehicle in order for it to be put on a container headed to South Sudan. Making it a bit more difficult was the fact that I didn't have access to much in the way of tools. The whole thing was made outside under the shade of an McDonald's billboard I set up for protection from the sun and rain. The only tools I had were some basic hand tools, an angle grinder, a borrowed cordless drill, and an old stick welder. Everything is essentially done except for some adding some light, my BMS, and the panels which are already in South Sudan. I will try to write some logs about specific components, but in general the drive train consist of 4 1000W QS Motor hub motors controlled by 4 Kelly KLS sine wave controllers powered by 60AH 16S GBS LiFePO4 batteries. 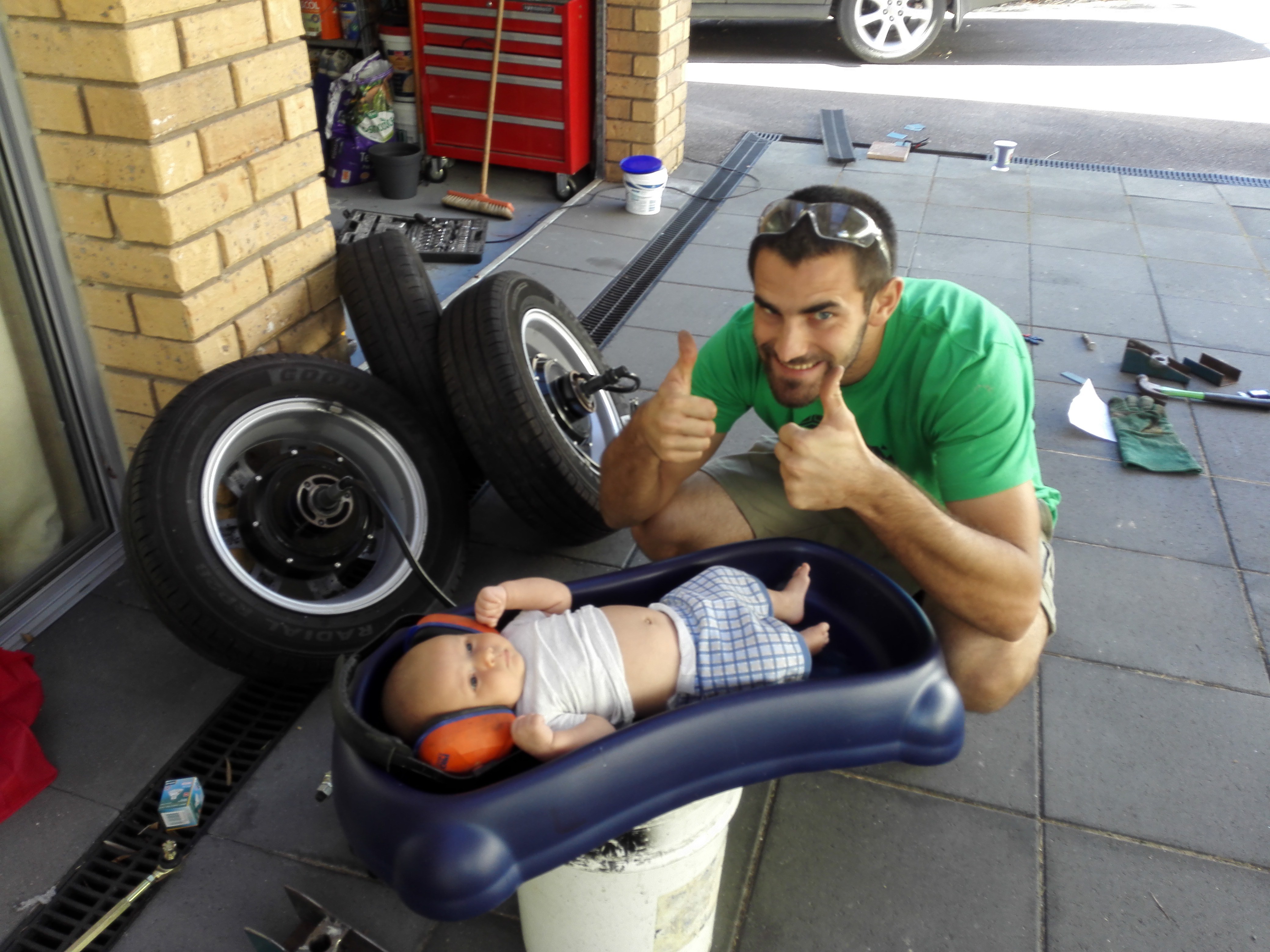 Inspecting the new hub motors. The rims are from a wrecked Holden. I had to modify them a bit to properly fit the 60.1mm center bore. 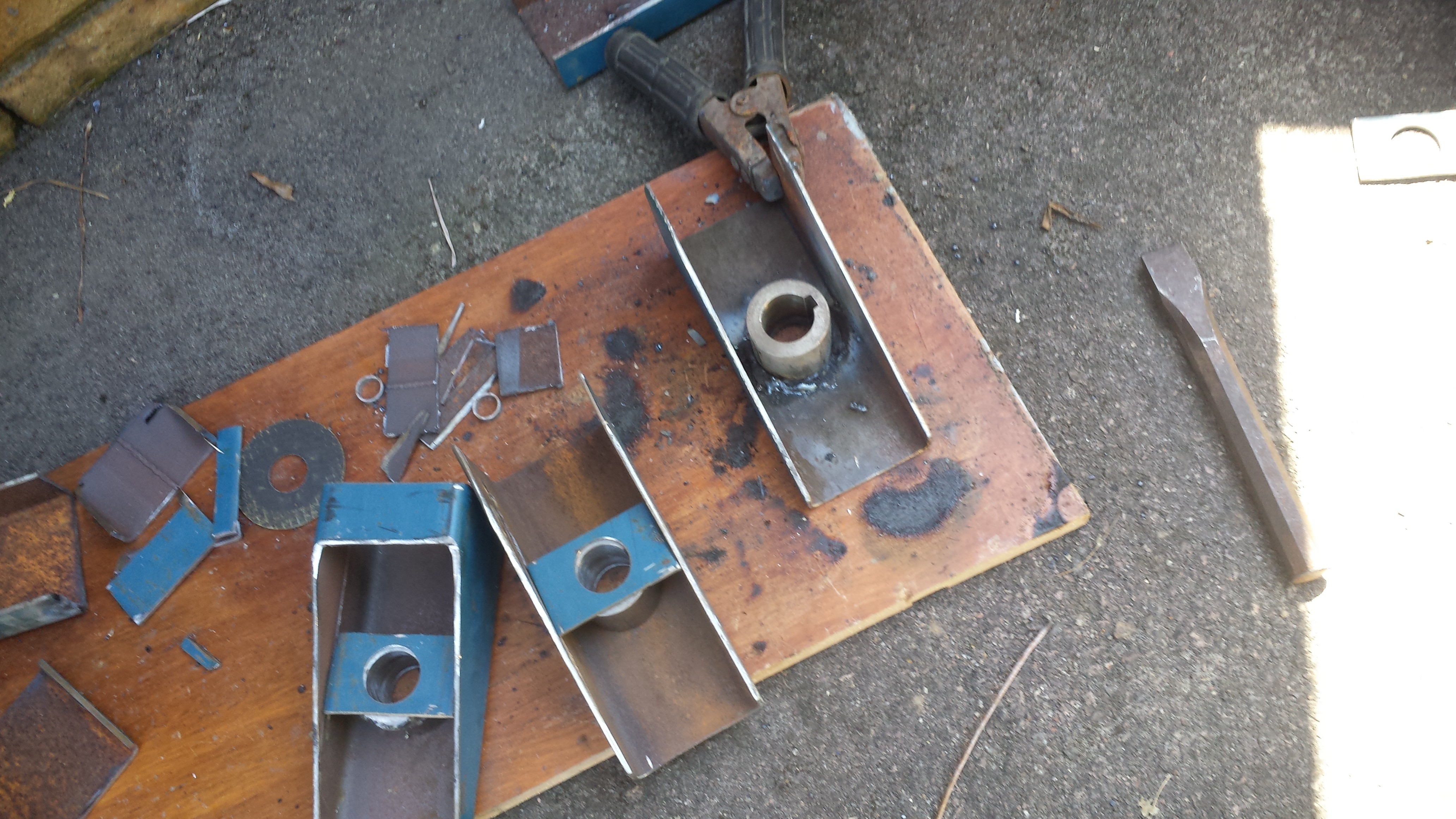 In the process of building the attachments for the motors. Found a new friend who bored out the steel and added the keyway. 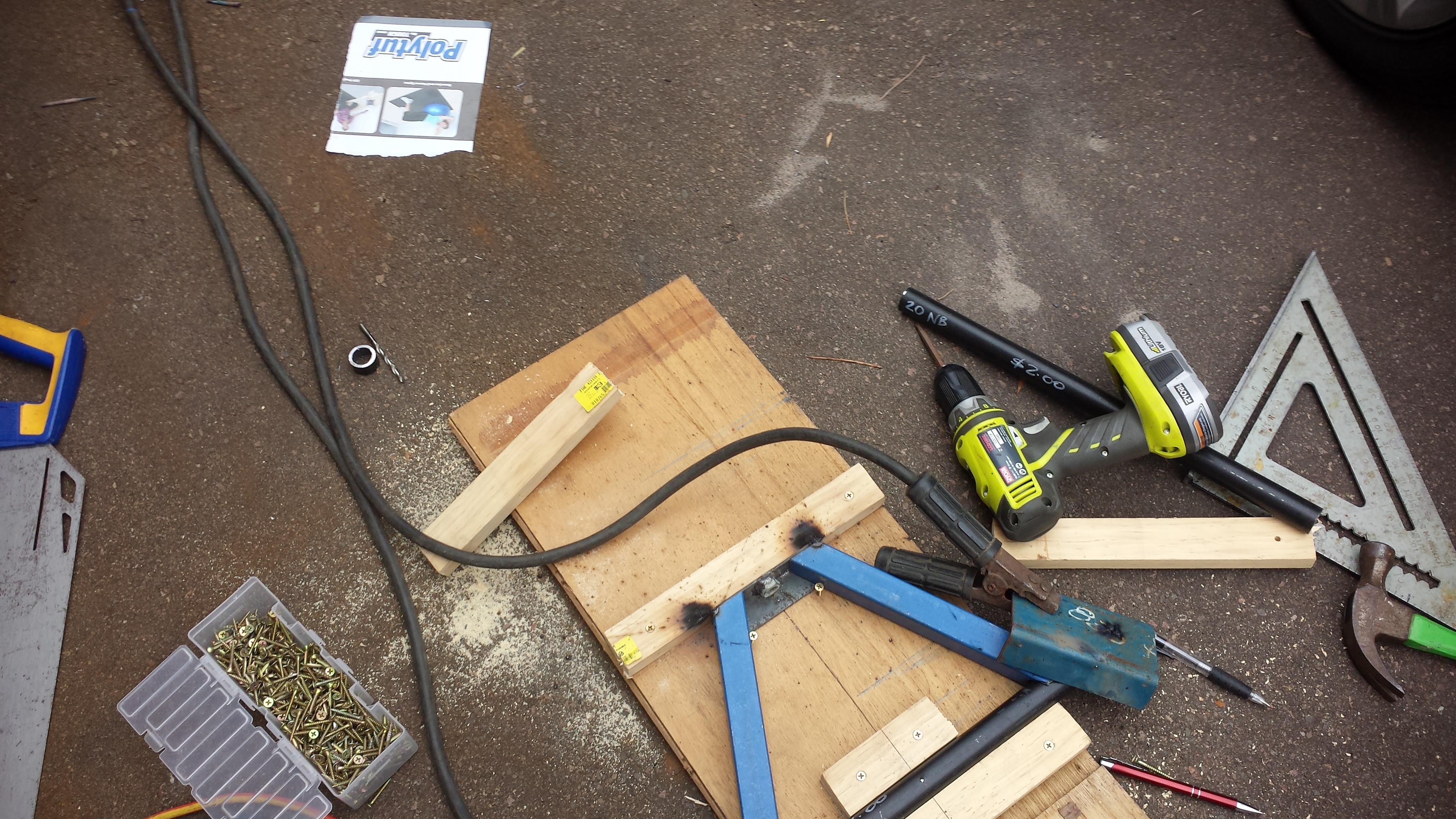 Building the upper a-arms. Not shown is the huge amount of time that was involved in calculating things like king pin inclination, caster, camber, and lots of other steering geometry I had to learn as I went. 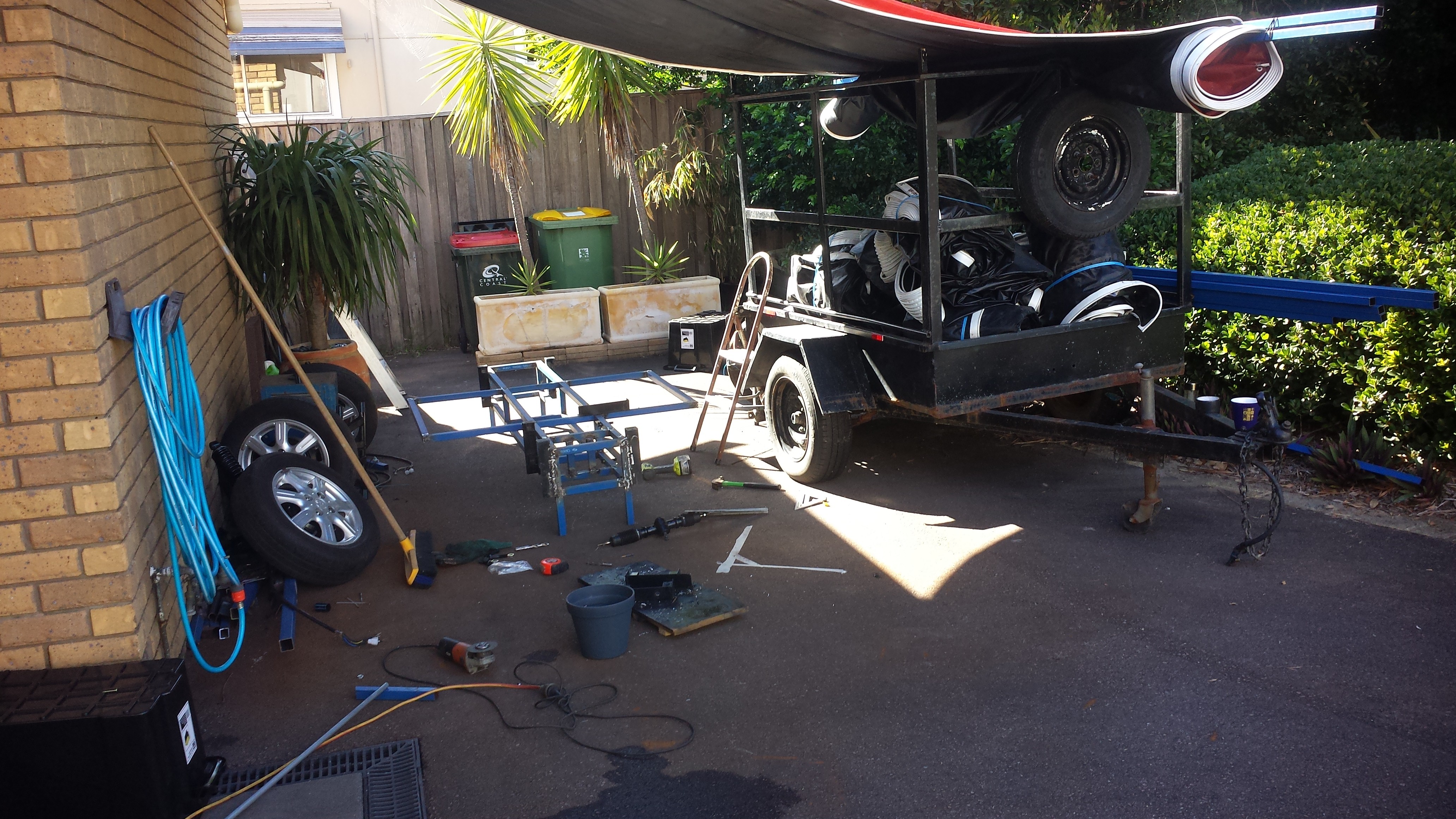 My "workshop" under an old McDonald's Billboard. I am taking these back to South Sudan to make light roofing structures. Working on the suspension. 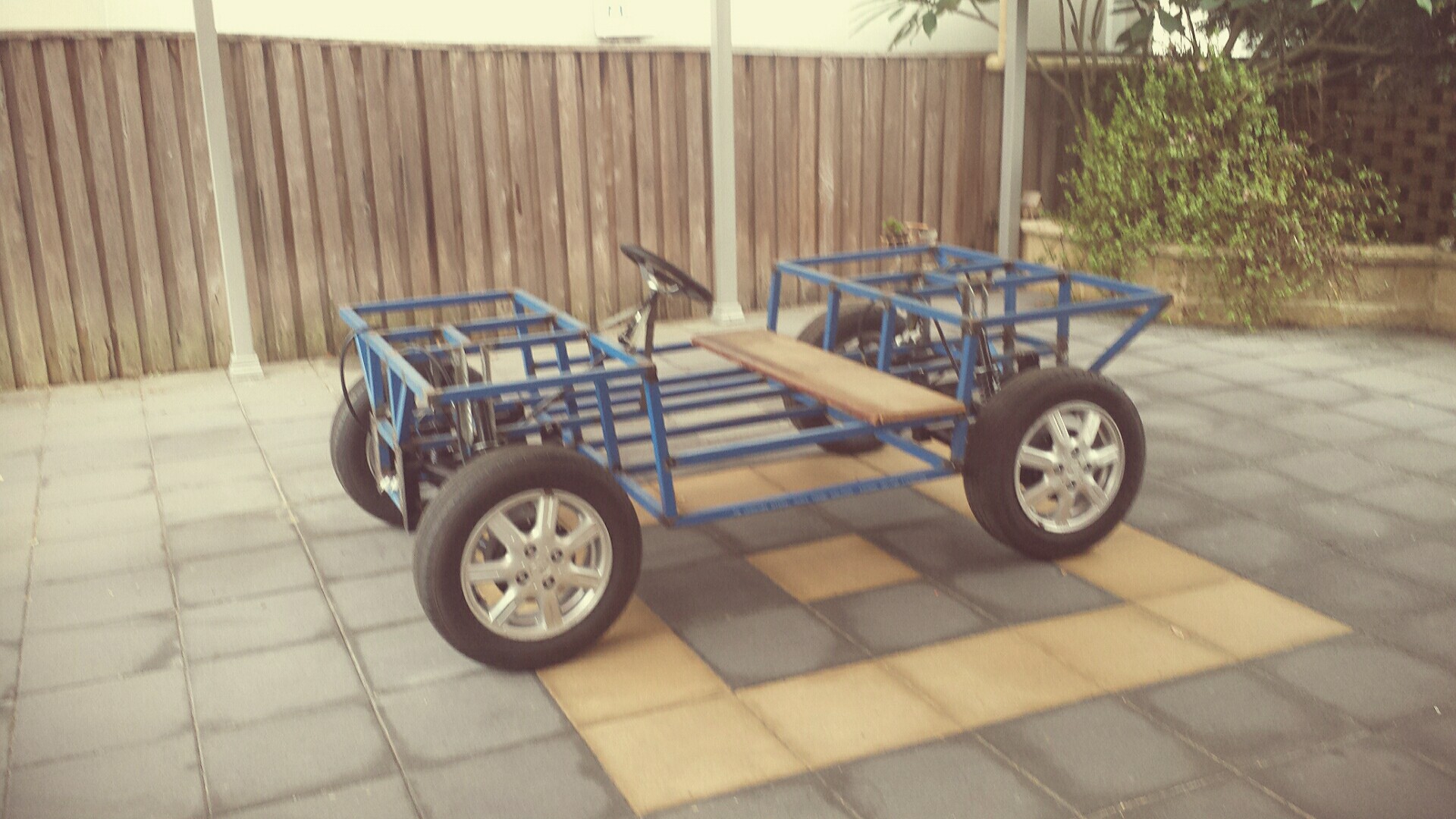 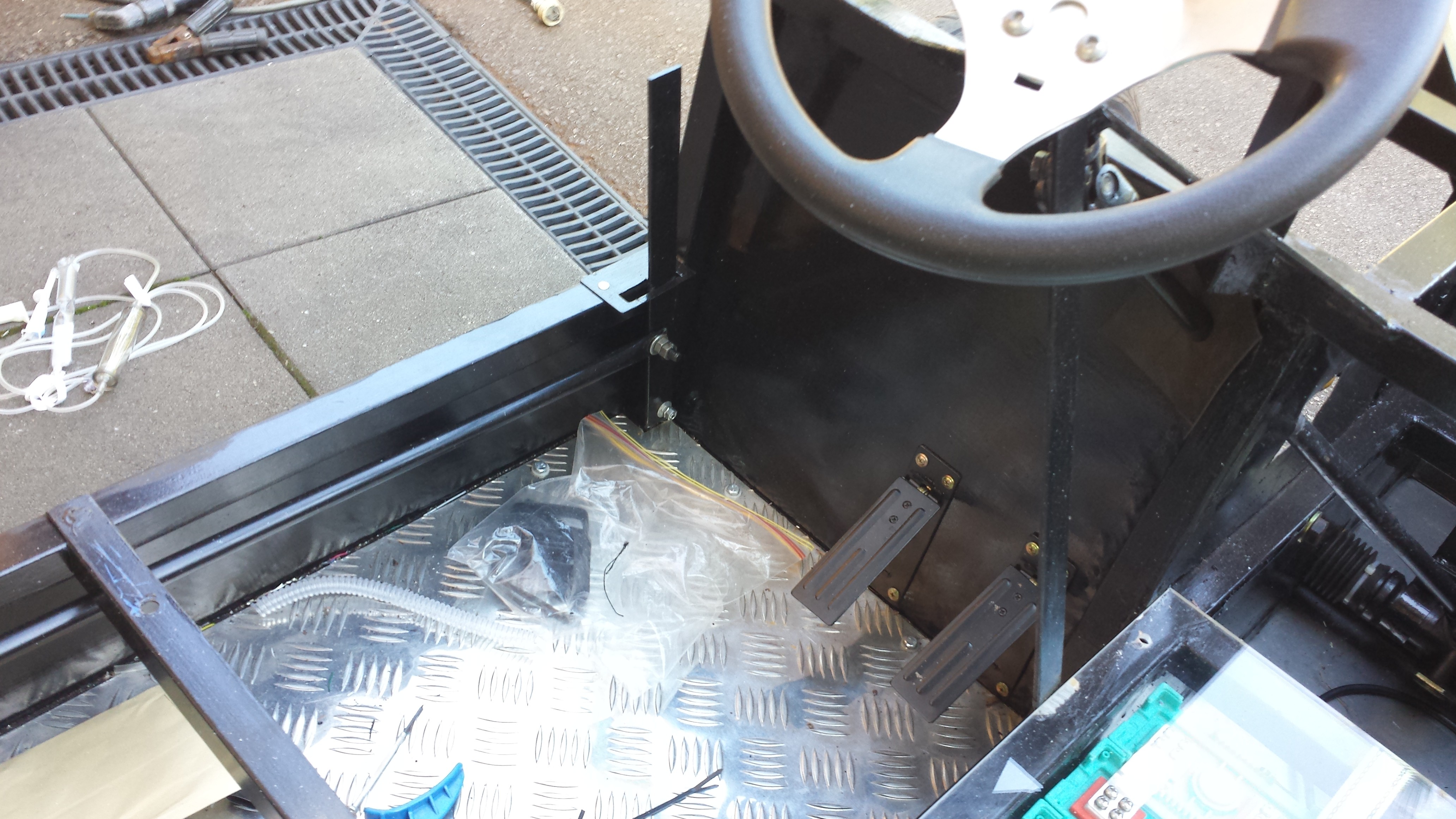 The right petal is the accelerator. Te left controls the regenerative braking. The handbrake controls the disk brakes and acts as the parking brake. 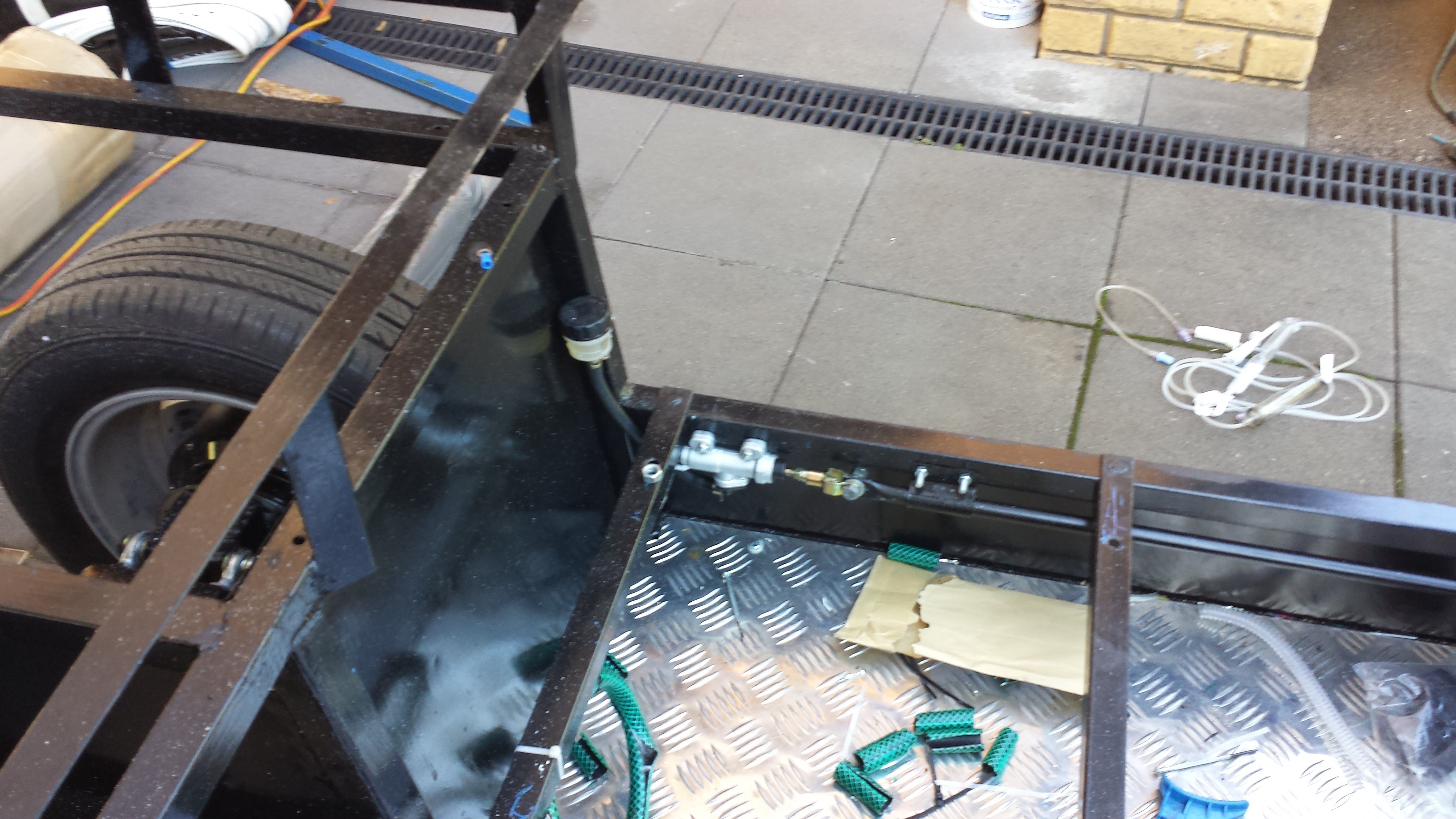 Mechanical linkage to the brake cylinder. 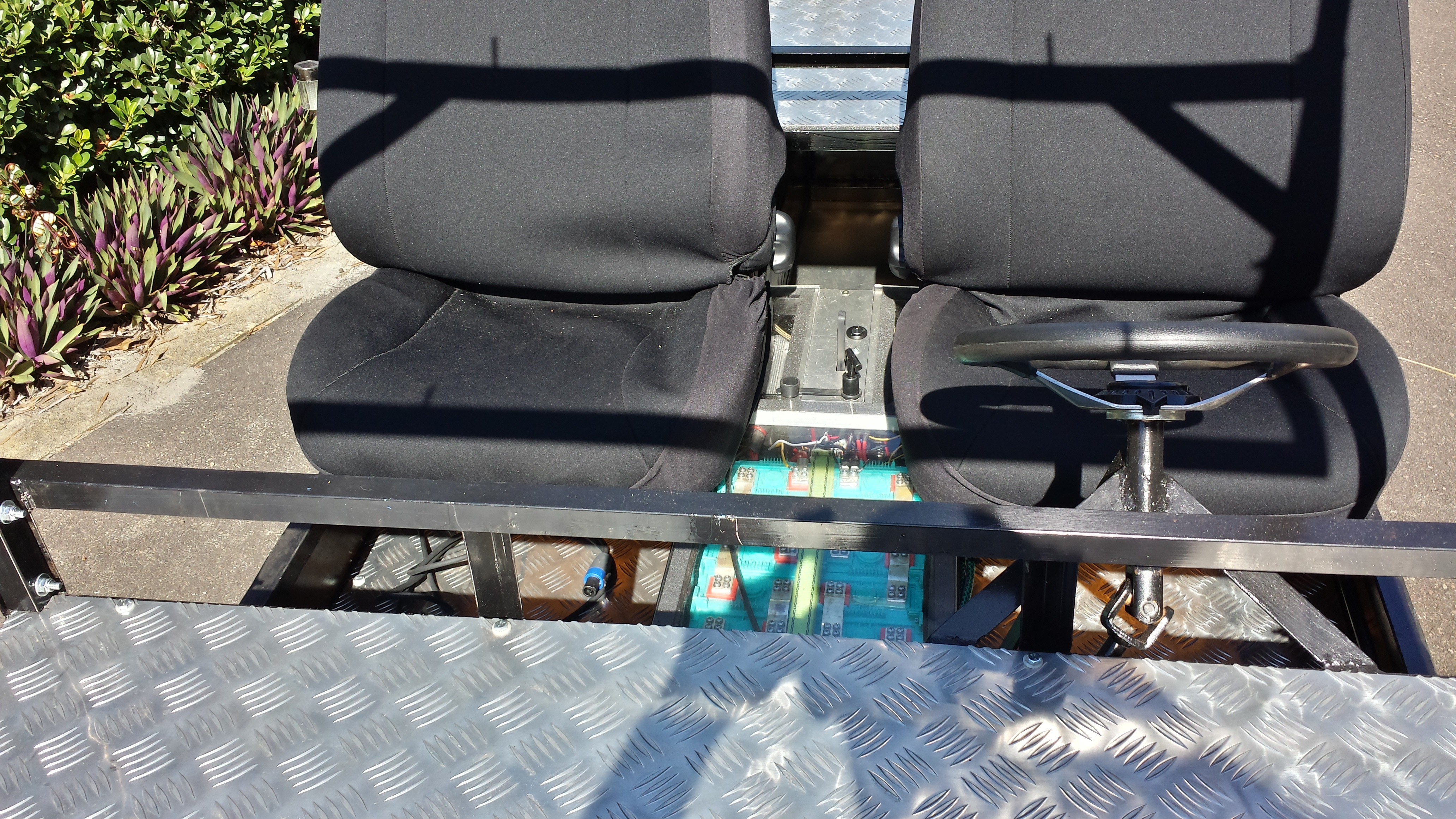 I had to change springs to beefier 400 lb/in. 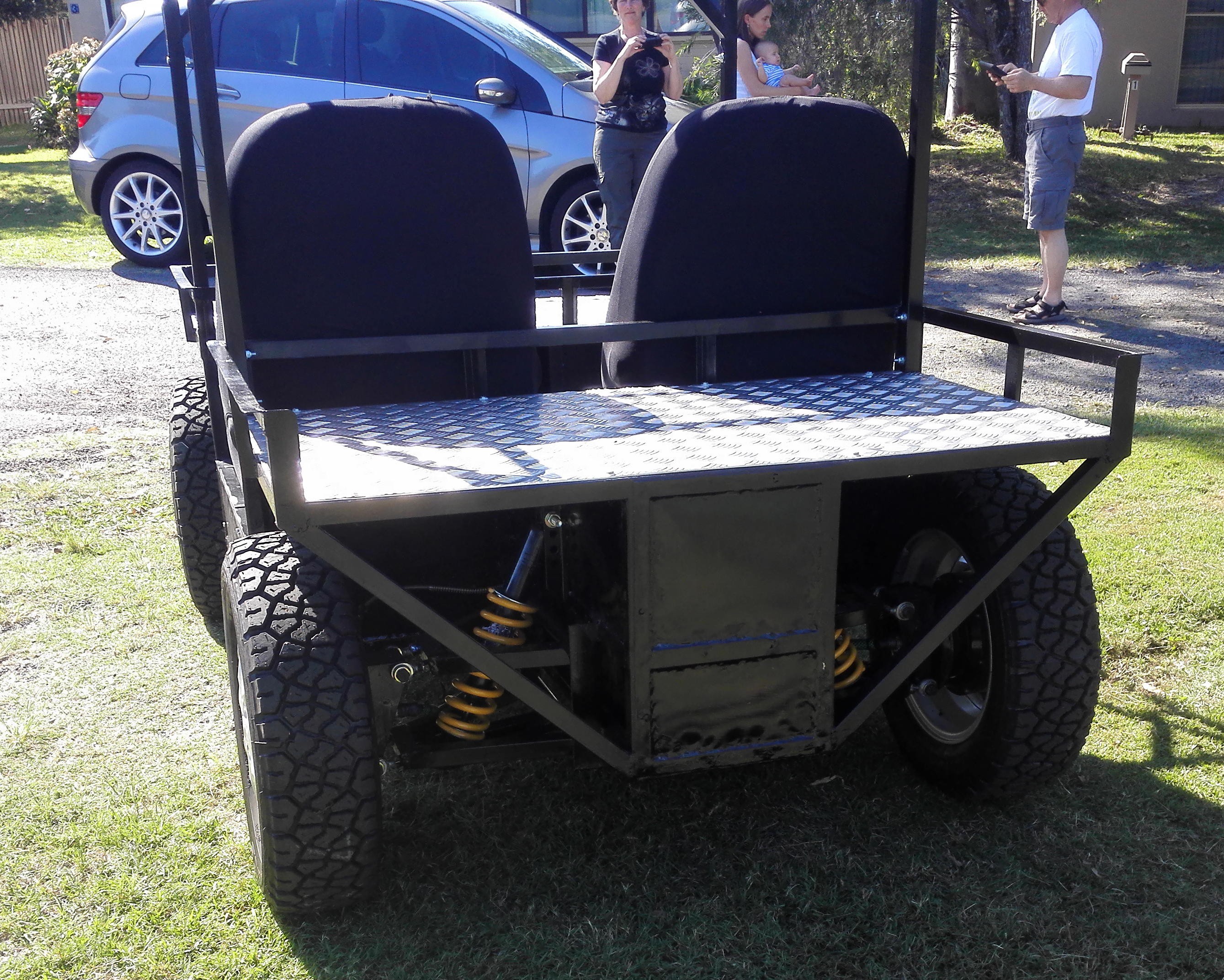 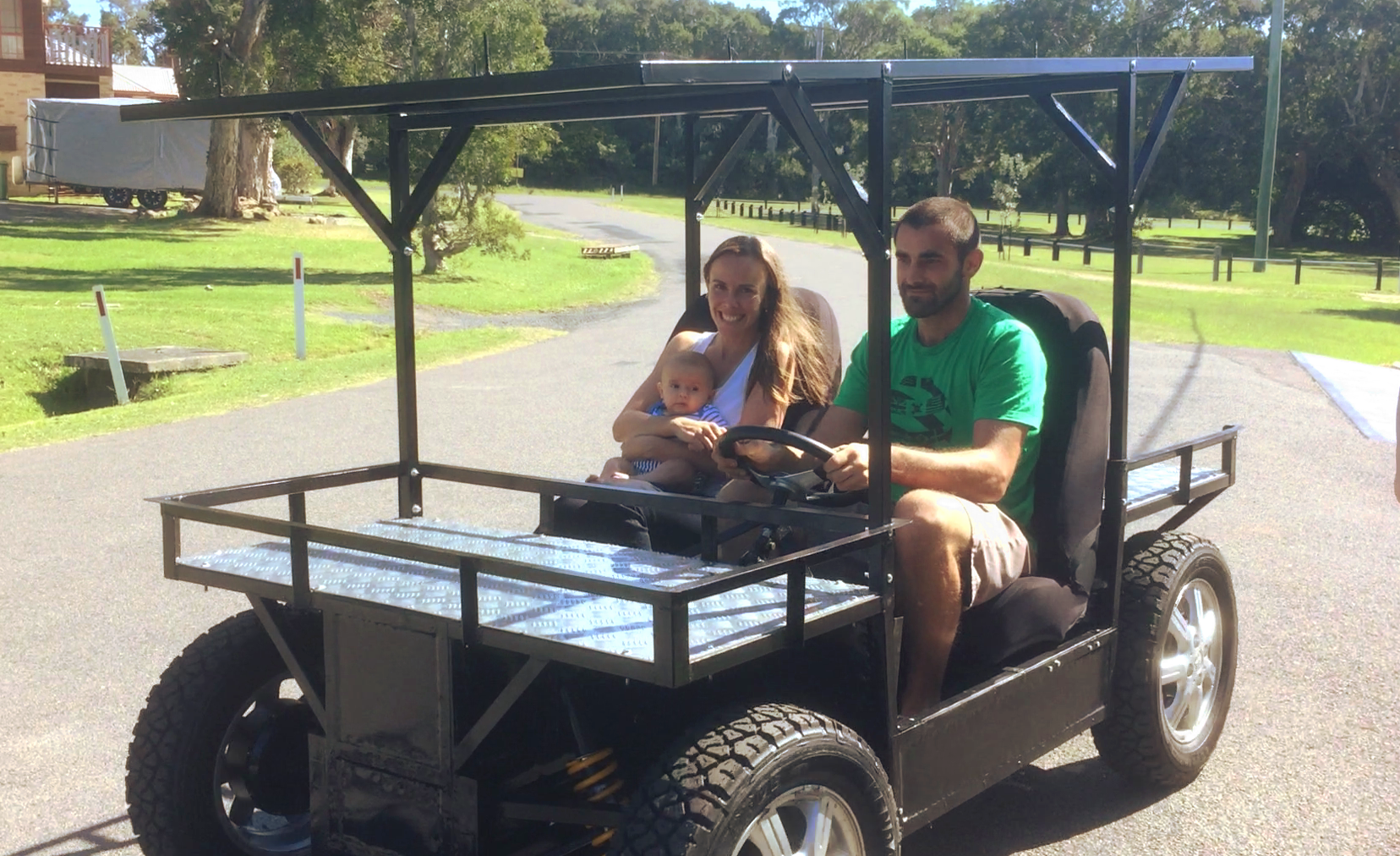 Absolutely cool. I am delighted you got to use the technology from the LUKA EV.  I presume you have found the hub motors simplify everything? The GBS battery is good. I have not been on HaD for months so I missed your update. The battery is 60aH x 51.2V? or 3kWh?.  Do you use any torque vectoring (I do not even need it on Luka even though we have it so I presume you do not need it)..  Are the 4 controllers attached to the throttle?  Do you have override so you can run each wheel separately?  That might be handy on this vehicle if it is in difficult terrain..  What weight is the vehicle?  How well does it climb hills?  Any future plans for the vehicle?  I think I can get you much cheaper (U& better) controllers if you want to build more vehicles..  Well done.  Best regards. Maurice

First thing i thought of is Flintstones car :) with the open frame and roof style. Just need dino in backseat and it would be exact match...

Well Done! man that looks cool ! And to think potentially the user could just leave it some time and then drive it again when charged, if no other power source. Its like a mini luka/golf buggy/atv