The Beginnings of a Simulator

Let's have a look at a first pass at making a simulator for the coded field MRI.

Simulating an instrument is a helpful way to understand the design, how different elements interact, how the instrument behaves in the presence of noise, and identify any issues early on to help inform your design decisions. I have some experience with this from my first postdoc in designing an adaptive coded-aperture spectral imager, and so I've started putting together a simulator for the coded field MRI to help understand the design considerations, and what kind of performance one might expect with such a system with specific design decisions. The high-level and very powerful MATLAB numerical simulation suite is the standard tool for constructing these simulations, but in the spirit of open source I'll be using GNU Octave, an open-source effort at cloning much of MATLAB's functionality.

Some folks like to design all of the individual components of a system and then piece them all together at the end. I prefer to have a simple but modular system up and running end-to-end so that I can see how each new component affects the system, and get a better intuition of how things work. Here I've put together a very simple simulation that is idealized and doesn't yet incorporate many important physical phenomena, and so we'll progressively add them in over the course of the project as we get a better appreciation for them.

The basic questions that we might have at the beginning of this project are:

and many others. Here we'll begin to find answers to some of these.

Let's orient to the simulator (above).

The simulator also includes a graph of the error in the reconstruction over time (top right), but I'm not sure that the metric I'm using now is well fit for this task, so we'll ignore it for now.

Before looking at some initial results, let's get an idea of the process, to help ground the ideas in the last post. 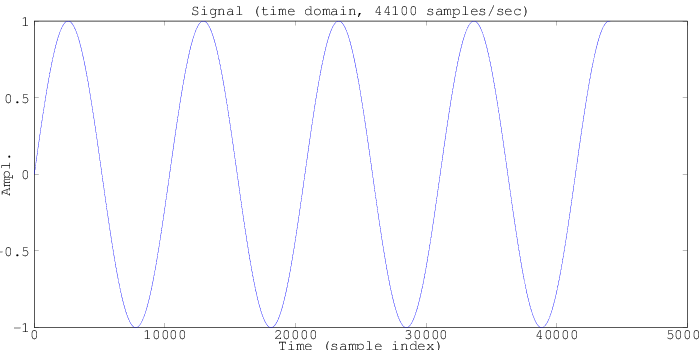 The magnetic resonance process from the proton precession magnetometer protocol causes the nuclei in a given spatial area to precess at a frequency determined by the magnetic field strength at their location. Assuming that the magnetic field strength is perfectly uniform, the signal might look something like this (above) -- a signal at one frequency. Note that physically has an exponential decay in it (the T2 relaxation), but here we're going to start with something exceedingly simple that doesn't decay, and add in a decay model later. 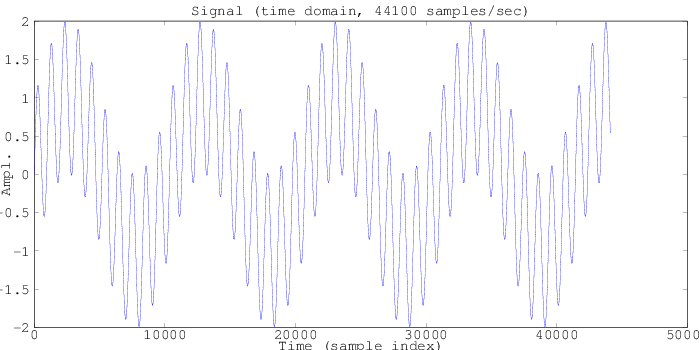 Now imagine instead of listening from only a single spatial location, we listen from two -- each having a different (but completely uniform) magnetic field strength. The signal might look something like this (above), with two frequencies -- one from each spatial location. 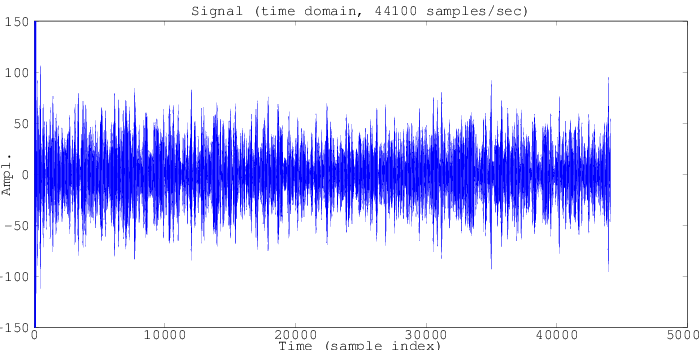 Extending this further to the 100x100 (10,000) points modeled in this simulation, we can see an absolute cacophony of 10,000 spatial locations all broadcasting their magnetic resonance signals at once. Here we'll switch to the frequency domain, where it's a little easier to make out the structure of this signal. 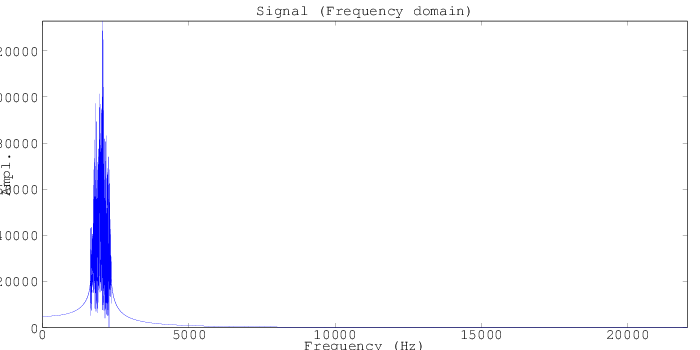 Here on the frequency domain plot we can see a large set of signals over a short band of frequencies around 2kHz, corresponding to random code intensities between 40uT and 55uT. Here, each frequency represents somewhere between one to a small number of spatial locations, and the amplitude represents the sum of the "signal" (say, the amount of water at a given location, represented by the intensity of the sample image).

Now, with a knowledge of what our code looks like, we can start to back out what the original sample looked like -- and that reconstruction will get better as we include more and more measurements with different codes.

Here's a first simulation, with the original sample (left), as well as the code (center) and reconstruction (right) as we progress from 1 to 20 measurements. At first the reconstruction is terrible, and looks very little like the sample -- but as we accumulate many measurements from different codes, the reconstruction starts to resemble the sample. This is because each code is full of ambiguities -- since the magnetic field intensity at a given spatial location could be the same as the intensity at another spatial location, the signal at a given frequency can't be accurately attributed to a given spatial location. One code might pool together spatial locations A and B into one frequency, so we can't tell how much came from A and how much came from B. But the next code might pool A and C into one frequency, and the next one A and D, and so on, and so after many measurements with many different (and known) combinations, we can start to back out what the signal from location A, and all the other locations, must look like. 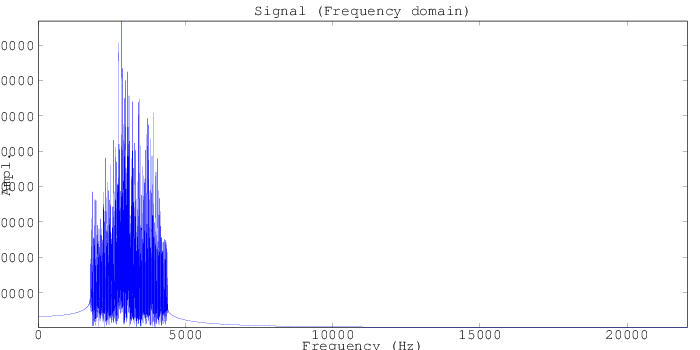 The last simulation was using only a very narrow range of magnetic field intensities in the code (40uT to 55uT), and so it had to pack a lot of information into a small band of frequencies. Let's increase the code range to between 40uT and 100uT (we're still in fridge magnet territory on these intensities), and see how this helps out our reconstruction. Above we can see that now our signal spans from between about 2kHz to 4kHz, which is still able to be well-sampled using our simulated sampling frequency of 44.1kHz (audio sampling rates). 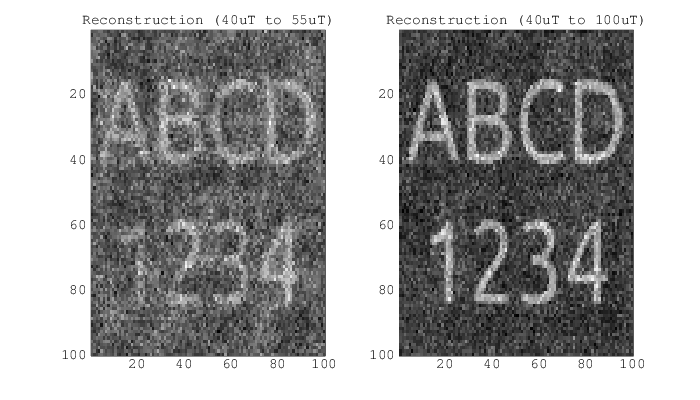 Just for fun, I found two slices online from actual MRIs of produce, and put them into the simulator. The first is an orange with lots of signal, simulated with codes from 40uT to 150uT, out to 20 measurements. The reconstruction looks pretty good! Though the fine structure in the peel and between the orange slices would likely take many more measurements to recover.

And while the test pattern and orange have lots of simulated signal, let's try this apple, whose amplitude is much less intense in most areas. Here we simulate with codes from 40uT to 100uT, but out to 100 measurements (or 5 times longer than the other simulations). This one definitely takes longer to reconstruct, but it does an okay job with the general structure after about 30 measurements, and picks up some of the finer structure and contrasts closer to 90 measurements.

The beginnings of the simulator are starting to take shape, and while these numbers will move around a lot as the simulation becomes more accurate (particularly with the addition of noise, the properties of a radio receiver, and more physically realistic codes that include field orientation), it's encouraging to have and end-to-end system, and begin to get an appreciation for the coded field system along with some very preliminary results.

Hey, that's really awesome but some images are missing from both this post and the concept post. Would be great to see them!