More frequency resolution from a spectrogram.

A plot of intensity at each frequency and time yields information about the spectral content of nonstationary signals. There is an inherent tradoff between frequency resolution and time resolution. The power spectrum of a short-term FFT (STFT) over T seconds cannot resolve events happening faster than T, nor can it resolve frequency differences smaller than 1/T. A loon call (from Charlie Walcott, Cornell University) at two difference lengths is an example. The calls were sampled at 22050 samples/second and spectrogram formed using STFT length of 256 and 1024. Frequency features are better resolved in the longer transform and time features better resolved in the shorter. It would be nice to have the best of both worlds. It is possible to get better resolution, within limits, by using more information than just the power spectrum.

A technique for sharpening the spectrogram uses information from the phase spectrum to sharpen the amplitude spectrum. The scheme locates simple sinusoids, linear chirps, and impulses at the correct frequency or time with a higher resolution than the inherent FFT resolution tradeoffs. The basis of the calculation is that the instantaneous frequency (IF) in each FFT frequency band is equal to the first time derivitive of the short-term FFT (STFT) phase at frequency ω and time T:
IF = ∂/∂t(arg(STFT(ω,T)))
and the local group delay (GD) at frequency ω and time T is approximately
GD = ∂/∂ω(arg(STFT(ω,T)))
where the function arg returns the phase angle of the transform (see Fulop). 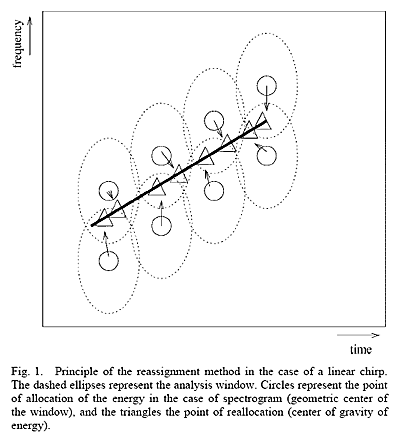 Chassande-Mottin, et.al. show that reassignment is equivalent to moving energy up the local gradient of intensity of the spectrogram (for Gaussian windows). This higher precision does not violate basic time/frequency uncertainty (see Gardner and Magnasco). There is still mixing between reassigned frequencies or impulses which are close together. Plante, et.al. illustrate this with a nice figure shown to the left. Each elipse represents one frequency-time cell of the STFTs which make up a spectrogram. The energy in the cell is is placed at a location determined by the IF and GD.

An online matlab reassignmentt code (Fitz, 2008) was modified for faster rendering and more straightforward selection of minimum plotting amplitude and rendering method. The modified raspecgram and ratoplot (called by raspecgram) produce a reassigned spectrogram, but require a few other routines from the Fitz site. The code runs in Gnu Octave as well as matlab. There is also reassignment code at mathworks.

Examples show the effect of the reassignment.

The first example generates two FM signals, with a superimposed linear chirp. The waveform and spectrogram are shown the the first figure, the reassigned spectrum in the second figure. Note that in much of the reassigned plot the FM signals and chirp are well localized, but when they approach each other some scattering occurs. Scattering can be optimized (as usual in a spectrogram) by changing the size and overlap of the FFTs used to produce the results. The reassigned spectrogram was rendered using one color for all points above an energy amplitude cutoff. The rendering mode is refered to in the code as fast. The rendering mode format is method_size_marker. For instance fast_1_dot, color_3_circle, color_1_circle are all valid. Valid methods are fast/color. Valid markers are dot/circle.

Waveform and spectrogram of the test signal.

Reassigned spectrrogram of the test signal. 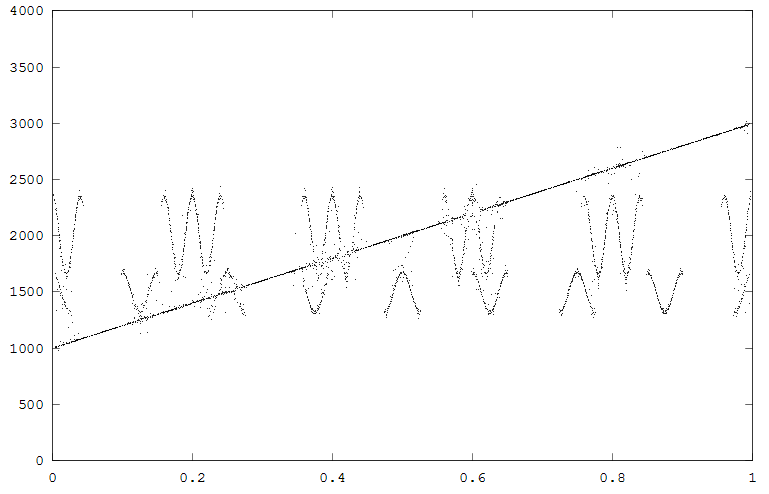 The second example is a nestling green-rumped parrotlet (Forpus passerinus) begging call (thanks to Karl Berg) with a complex multiharmonic, FM structure. The spectrogram of a short segment is shown in the first figure, the reassigned spectrum of one vocal burst in the second figure and another in the third figure. The reassigned spectrogram shows a lot of detailed FM which is hard to discriminate in the original spectrogram. There is enough similarity between the two vocal bursts (and enough coherent structure in each image) to suggest that much of the fine detail revealed is real. The reassigned spectrogram was rendered using four colors for points in four log(energy) bins above an energy amplitude cutoff. Red is highest energy, then yellow, green and blue. The rendering mode is refered to in the code as color_1_dot.

Spectrogram of a short segment of the parrot song. 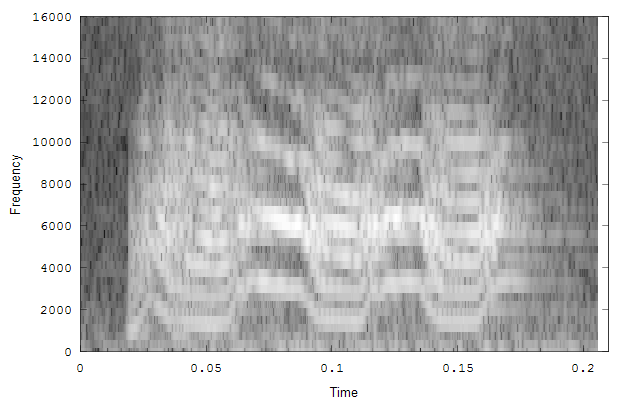 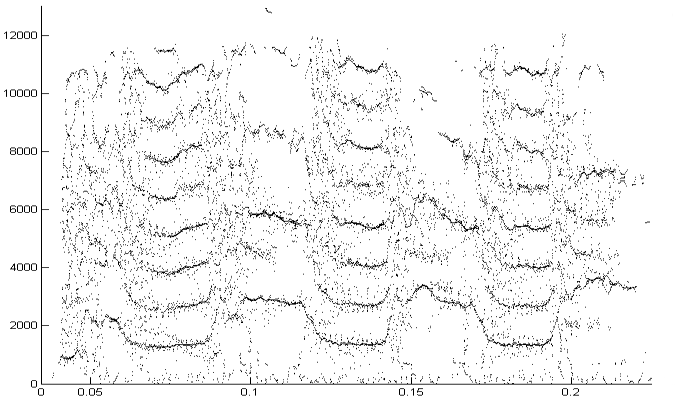 Reassigned spectrogram of the above segment 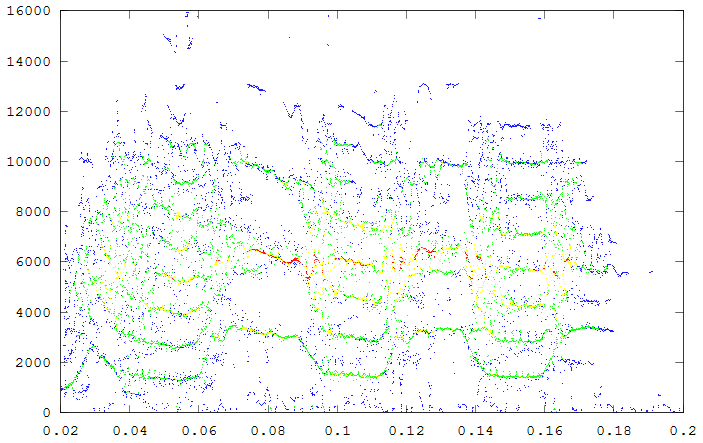 A second segment of the same song to show repeatbility. (click to enlarge) 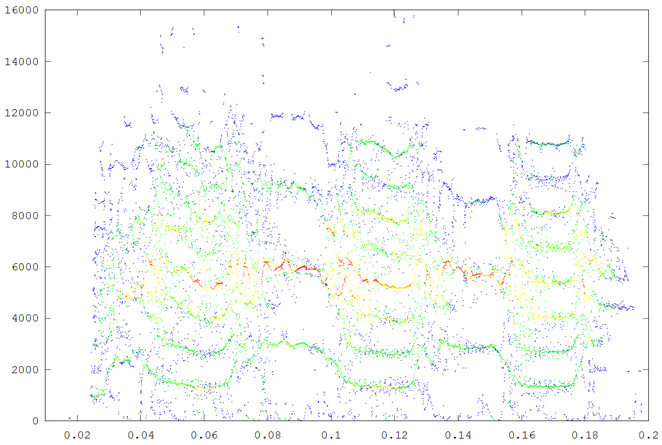 The third example is a boat-whistle call of the gulf toadfish (Opsanus beta) (Thanks to Luke Remage-Healey and Aaron Rice). The sound is a short noise burst followed after a pause by steady, harmonic-rich hoot. The image pair shows a short segment analysed with a 512 point STFT and 90% overlap...

This is very nice. I was looking for a way to use the FFTs to resolve phase shifts.  I do not like using canned programs, as you can spend a lot of time learning them, never really knowing if they are correct or not. So I will have to try to back track the functions and math you are using, and do it from scratch. Any clues welcomed.

I found that every every analog gravitational sensor data stream can be bolted into off-the-shelf tools from electromagnetism and other fields.  I was trying to design a phased array using low cost components today.  The radar and ultrasound chips are getting cheaper, and many devices and chips for electromagnetic communications channels can be adapted to process the signals and image some of the stronger natural sources, and maybe a few man-made ones.

I was girding myself to plow through the web to find this phase shift calculation, so I was very pleasantly surprised to find it waiting on HackaDay.IO.   FFT's are extremely cheap these days, and it can be adapted quickly.  I will try to work out a program to solve this myself, and see if I can optimize it even more.  I have to work at micro, nano and femto accuracy most days, and some of the tougher problems require even more.  I have been trying to use existing low resolution sensors by fitting the analog ones to high samplng rate ADCs then using the data to calibrate the instrument.  Once calibrated, you need an array, to eliminate some of the local variations, and very long time frames.   I use the sun and moon as reference points often.  I am trying to adapt the seismometer networks to use them as gravimeters, but they all need to be upgraded, something that can be done in some cases by upgrades their amplifiers ADCs and data handling. There is nothing wrong with analog sensors - if you control the amplifier, ADCs, calibration and modelling.

The gravitational potential changes associated with an earthquake, or even with ocean waves breaking on the beach used to out of reach as sources. But now there are increasingly 3D video techniques to essentially measure the 3D distribution of mass over time.  Many people can do that now, some if they just tried.   If you randomly sample from the points included, you can get a stable estimate of the gravitational potential over time at the detector locations.  Two or more sensors, based on their location, can then sample at precise times to focus on any given location.  (Please check me on that.  I think it is true and have tried some simuatlions.  But always cross check myself many many times.  I do not have access to hardware, so I have to use ten or fifty papers to get what one simple experiment would show.)

Thanks again for your elegant solution to an otherwise difficult problem.

Matlab is faster, but Octave is free.

Animation: Random BUT repeats in space and time!

From raw RF samples of the GPS L1 C/A signal to a position fix, in a completely open fashion
Project Owner Contributor

Hackaday Prize 2019
Adapting an existing code base used for music transcription and spectrum analysis to forecast the near exact time of a major earthquake.
Project Owner Contributor

Stalking the Big One