I forgot to build something for the Bay Area Maker Faire Bring A Hack event. I started this on April 7th. The Faire is May 16th.

The rarest gummi of them all, the gummi RGB seven-segment clock. Carved by gummi artisans who work exclusively in the medium of gummi.

It's a clock using very cool seven-segment displays available from Adafruit. Each segment of the display is an RGB LED. Yes, it will look cool. 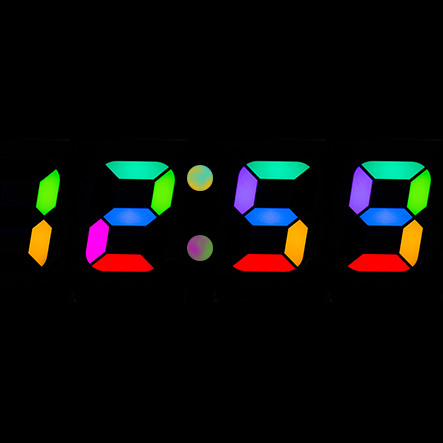 Holy balls, does that ever look awesome.

This is a clock made with RGB seven-segment LED modules available from Adafruit. The form factor will be an oversized Raspberry Pi Hat; this clock needs to connect to the internet (for some reason) and I have some other ways to use these numbers.

The project looks nice, maybe  next time ty using my solution for the wireing and controling problem

You should make a shield that has REAL Gummi Worms on it, pressed onto pin headers at the ends of each segment...

That is lit up with HV!
https://www.youtube.com/watch?v=hKS1lq8NrjM

Awesome Project :) Do you want to control it by the Raspberry Pi?

There aren't many connections to the pi, though: only data, clock, latch, and some /OEs. The RTC is just I2C. I only need a few bytes of RAM to drive the display, so theoretically I could do this with a small ARM or ATtiny.

I wanted to connect this to the Internet for some reason, so a Pi was the natural choice.

Great thank you for your Reply!

I'm still sad that i didn't get into Pi programming :(

Then Good luck and have fun ;)

BTW: Am i right, that the Hour and Minute Separations have the same color later on?

Yeah, The colon of 5mm RGB LEDs are going to be the same color all the time. Laying out the board, this was the best way to do it. I think it'll look better, but - meh - this is just something I want to make and it needs to be done in a month. Less than a month, actually.

The Github now has the beginnings of a non-pi version that makes a little more sense form-factor-wise. It's controlled with an ATMega328p. When I do the layout for that, I might make the seperator colon individually addressable. I need to work out the kinks with the Pi version first.

"Holy balls, does that ever look awesome." You took the words out of my mouth, and probably every other blinky-light fanatic's as well.

dag-nabbit! I thought I could clear that up before it was noticed.

This is a simple LED clock that always displays the exact time, thanks to it being connected to a 802.15.4 network.
Project Owner Contributor

Back To The Future Time Circuit Clock