Spinal injury is the most common cause of quadriplegia, though there are many diseases that can produce the same result - inability to produce controlled movement in any of your limbs or head. For people in this situation independent control of their wheelchairs is not possible – the technology just isn't available. Independent mobility increases quality of life significantly, and it's loss is keenly felt by those robbed of it, through accident or disease.

The scale of the problem is enormous. ALS is responsible for only a tiny fraction of the people in this situation, yet there are five thousand ALS sufferers at any one time in the UK alone, and twenty thousand in the US. Most of them will end up sat immobile in their wheelchairs, unable to move on their own. Eyedrivomatic could help most of them.

To create an inexpensive and accessible way for people with motorised wheelchairs to take control of their mobility via eye movement, using open source methods as much as possible.

Steve and I both have Motor Neuron Disease, or ALS as it's also known. We both have electric wheelchairs, but while I still have some remaining movement in my fingers, and am just able to operate mine, Steve only has his eyes left, and until Eyedrivomatic, had to rely on his carer to operate his.

It is usual for people with MND/ALS in the UK to be provided with electric wheelchairs loaned by the health service, for as long as we need them. Steve and I have wheelchairs, and we both also have eyegaze equipment (which is becoming increasingly more available). At the moment it is not possible to operate one with the other. Eyegaze technology is only intended for operating a computer, not the chair.

As I don't actually own either the wheelchair or the eyegaze, my idea was to make something that would interface with the user's chair mounted computer, and physically move the joystick. Crucially this would mean not making any modifications to the loaned hardware, and could work with any wheelchair and eyegaze combination.

The solution I came up with is called Eyedrivomatic, and is a two part system, a 'brain box', containing an arduino and four relays, and an 'electronic hand', containing servos to move the wheelchair's joystick.

I decided on this approach, rather than interfacing directly with the wheelchair's electronics for several reasons. I know the protocols for my own chair, but not all chairs use the same protocol. Also, my chair has a socket for plugging in external joysticks, but that is by no means common on other chairs. And the sockets are of a proprietary design. Interfacing directly would, on most chairs, involve physically cutting in to the wheelchair's wiring.

This is an issue because many people don’t actually own their chairs – especially in the UK where they are loaned by the health service and will be reclaimed after the user’s death.

An integrated version of eyedrivomatic in new chairs would be brilliant, but this hacking – yet non-interfering – approach to existing tech means the problem can be solved cheaply and easily for those who need it as soon as possible.

This is especially important as ALS usually has a very rapid onset and people losing their mobility need a practical and inexpensive solution as soon as possible with what is immediately available.

Two years in development, eyedrivomatic now works well, and is;

I put in a four relay module as standard equipment in the brain box. These relays are for operating external switches of the user's choosing. Many wheelchairs have tilt/recline functions, and often these can be controlled using buttons plugged into sockets on the wheelchair's joystick unit. Thus Eyedrivomatic can control all of the chair's functions. One relay is used internally as part of a safety system. The functions on the chair will only use two of the output sockets on the brain box, leaving one for other purposes. Also, the arduino has plenty of spare pins and processing power. In order to utilise these, there is plenty of extra room in the brain box for more input/output cables. These could be used for a variety of purposes including;

And so on. I want Eyedrivomatic to change people's lives, and it's inherent flexibility will help that process. 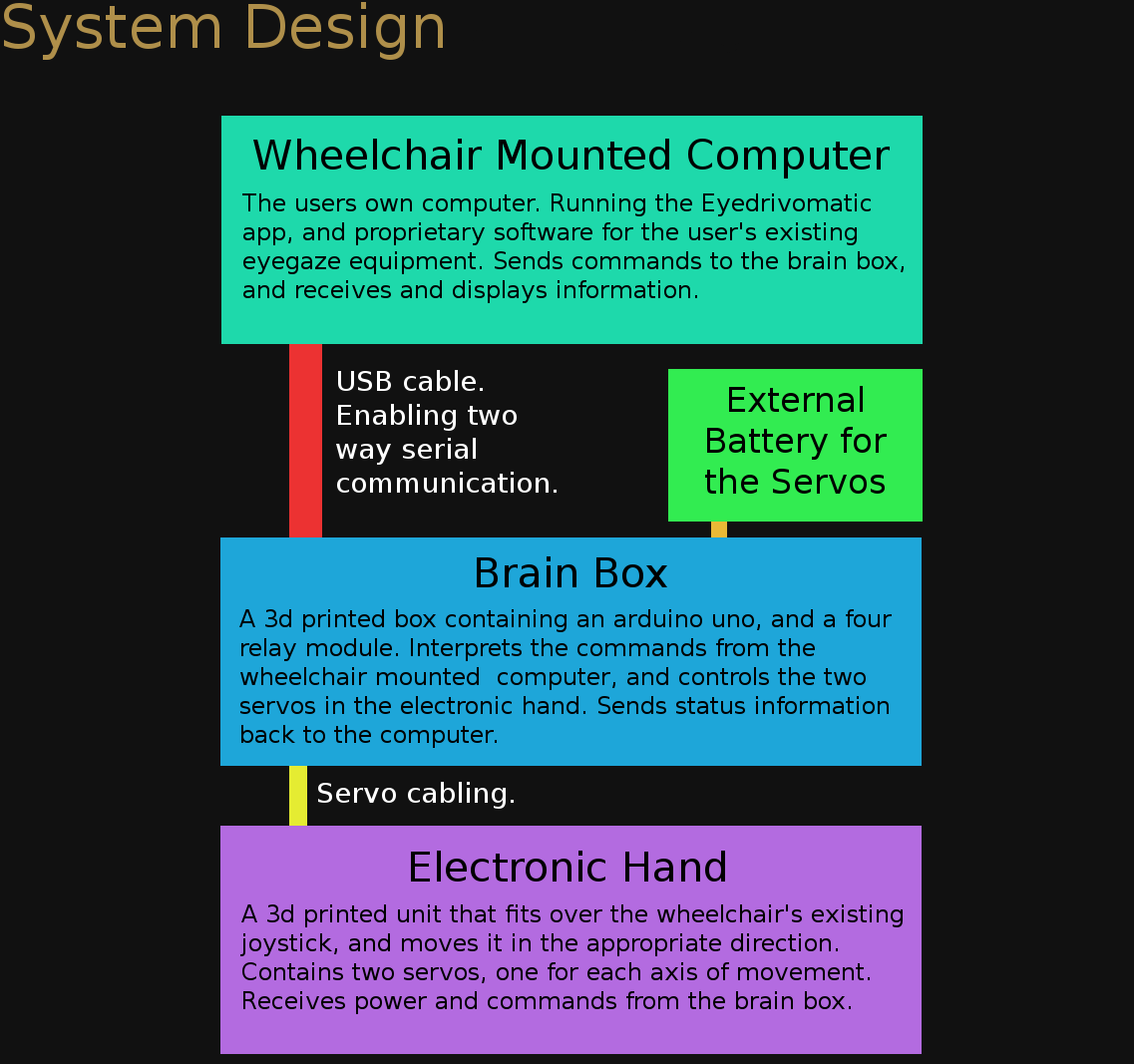 At the time of writing this (23rd October 2015), we have reached Mk6 on the Electronic Hand, and Mk4 on the Brain Box. The hardware finally reached the point where Steve actually said, “OK, the hardware is good enough.”, which is praise indeed, coming from him!

So I stopped hardware development straight away, and went into production instead. We were determined to get some systems out to some of the people on the waiting list, in time for them to appear in our final film of the competition. I managed to build three complete systems, and get them in the post. Two of our beta testers had their first test drives yesterday, and are delighted! The third system went to an ex marine in the US with ALS, but unfortunately hasn't arrived yet.

Eyedrivomatic can still be improved, but it's advanced enough for other people to use. I've put an instructable up for building the hardware, (also available as a PDF ). All the build files are on our new Github repository. Included on there is a 'getting started' guide taking you through the set-up process, right through to the first test drive. 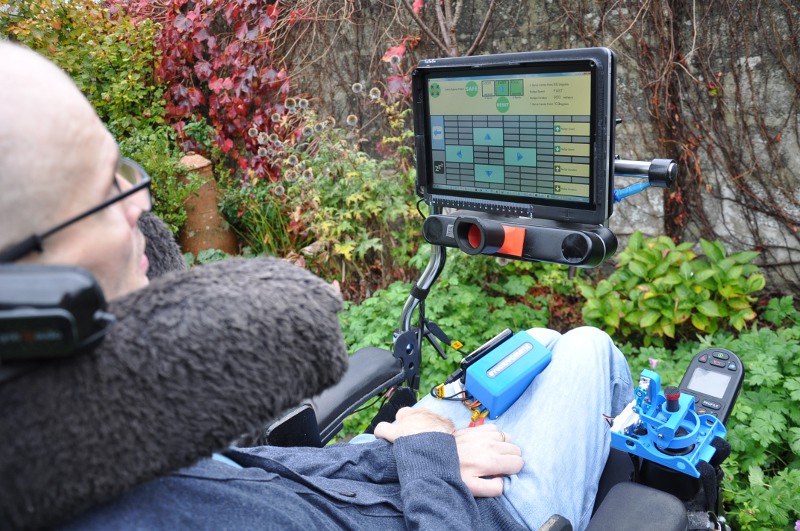 The Eyedrivomatic system currently fitted to my chair

In the development of the brain box design, I have tried to make it easy to build. All the components and cabling are available off the shelf, and either plug together, or screw into terminal blocks. This means that no soldering is required in any part of the construction - the intended end users not necessarily being geeks like me. Of course even this relatively straightforward build process will be beyond many people. Which makes the manufacture of a pre-built production version all the more important. 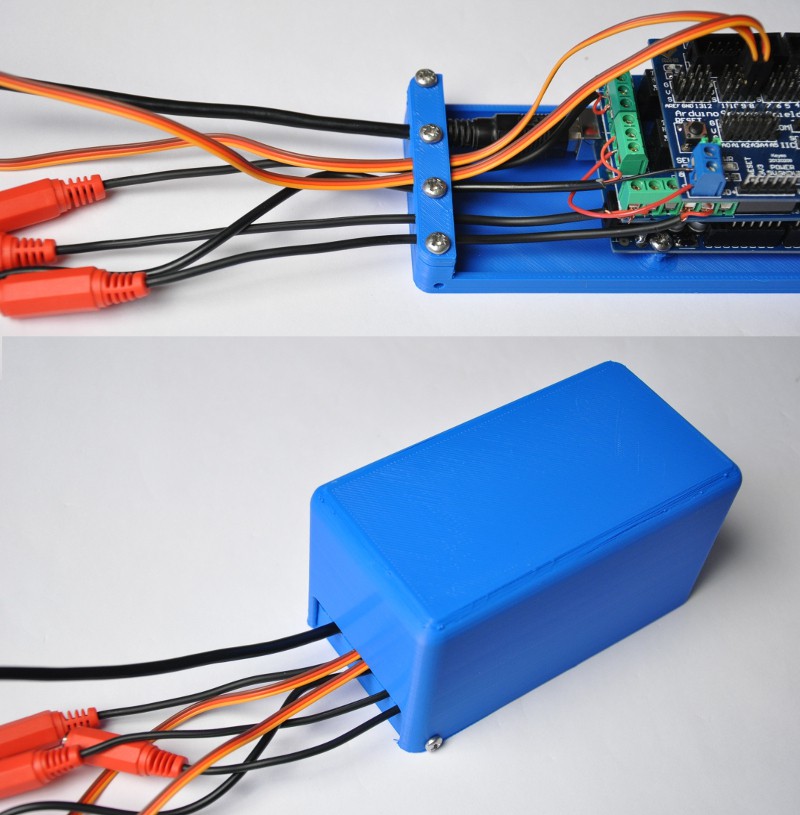 Disability equipment is usually extremely expensive. For this reason, we are not going down the traditional commercial manufacturing route yet. Instead we are starting with a local, low volume production system. Eyedrivomatic has been designed and optimised with this in mind. With off the shelf components, and 3d printed parts, construction is simple, and requires no specialist tools. We aim to encourage people worldwide to manufacture eyedrivomatic systems in their garages. With the diffuse nature of the manufacturing and user base, we hope to build a community to continue the development of eyedrivomatic into the future. We have decided to go down this route rather than design dedicated pcbs for volume production immediately, as it will allow for further rapid product development as the pool of Eyedrivomatic users grows. It is our hope to build a community that will sustain and manage the development and maintenance of the project beyond my own death. Clearly, a dedicated pcb will simplify the build process enormously, and reduce the cost. Once the software development has advanced a little further, we plan to start investigating the pcb production process.

Eyedrivomatic's software is in two parts, firmware for the arduino in the brain box, and a pc application which I have written in processing. Many eyegaze users will have software on their computer for communication and computer control. Our intention is that the pc software will be accessible through the users own computer control software, or directly, using the eyegaze equipment's mouse emulation capabilities. At the moment, it only works with one computer control package - Grid2. Grid2 has allowed for rapid development of the pc software, but now is limiting the numbers of people who could potentially benefit from eyedrivomatic. Writing the stand alone pc application. Is now my main priority. 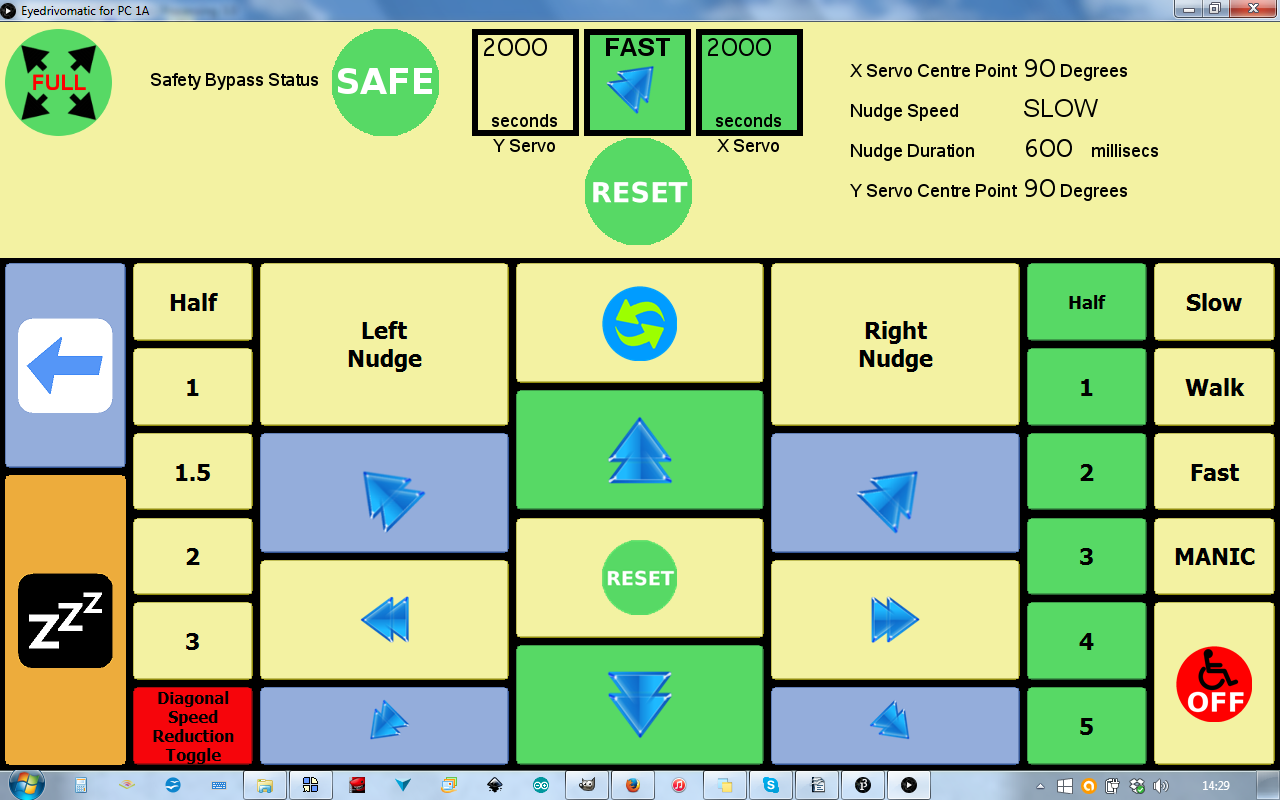 Our intention from the beginning was that Eyedrivomatic should be an entirely open project. To this end;

All the software for the eyedrivomatic project is copyright 2015 Patrick Joyce, and is free software: you can redistribute it and/or modify it under the terms of the GNU General Public License version 3.For more info see http://www.gnu.org/licenses/

All the hardware for the eyedrivomatic project, and the 3d design files and stl files necessary to produce the hardware are copyright 2015 Patrick Joyce, and are licensed under a Creative Commons Attribution-ShareAlike 4.0 International License. For more info see http://creativecommons.org/licenses/by-sa/4.0/

At present there is only one quadriplegic who is also an experienced eyedrivomatic user - my team mate Steve. He will tell you about the difference eyedrivomatic has made to his life;

"I am Steve Evans, I was diagnosed with motor neurone disease 8 years ago. Since then I have gradually lost 99% of body movement, my voice and the ability to eat or drink. 4 years ago, as one of the many significant diseases milestones, I finally lost the last tiny movement in my hand, preventing me from driving my wheelchair. I was devastated.

For the last 4 years I have been totally dependent on others to move me. Without this assistance I was stuck in one place, I couldn't even turn to change my view. But Eyedrivomatic has changed everything. Now I can move and drive my wheelchair with my eyes, it's utterly brilliant.

With just a little practice, I have regained a significant amount of independence. The controls are safe and intuitive with different modes for driving outside or manoeuvring in tight spaces. I can now go where I want when I want, and I can even adjust my seat position.

Eyedrivomatic has transformed my life and will transform thousands of other lives soon."

If you would like to get involved in the eyedrivomatic project, or would like a system yourself, do get in touch.....