This is a CD changer emulator for select Saab cars that lets you stream music to your stock stereo over bluetooth.

I've used lots of information over the past 5 years to put together a simple module that you plug into your car that lets you stream your music to the stock stereo. This module emulates the $500+, factory 6-disc CD changer that normally resides in the trunk. Now you have your entire music library at your fingertips without any mods.

The module simply tells the car that it's a factory changer, which turns on the audio input to the head unit that would normally come from the CD changer.

A factory CD changer is expensive, requires special dealership equipment/computer to enable the changer, and only holds 6 discs of music.

This module is less than $75 in parts, and is open-source.

There are 2 versions of this project, a 3.5mm input version, and a bluetooth version. I have pretty much stopped working on the 3.5mm version because bluetooth is better :)

My software skills aren't nearly as good as my hardware skills, so because of that, the module has issues. I think they're all timing-related. sometimes the module will "drop out" and the radio shifts back to the radio. I also don't have a good way to change the SID (Saab Information Display) to display custom text without the module dropping out even more than normal.

Some other small problems that need addressed are controlling the bluetooth module better; it has SPI built in, but the documentation for the chip doesn't describe any of the functions/commands available, and I don't know how to talk SPI, anyway.

Currently, the module is able to read "Next" and "Previous" steering wheel button commands, which in turn "hits" a button on the bluetooth module, telling the iPhone (and presumably Android) to change tracks. I also have a "play/pause" button available on the module. These features have worked in the past, however, currently the software doesn't work right, so it's very much a work in progress and those extra commands don't work. 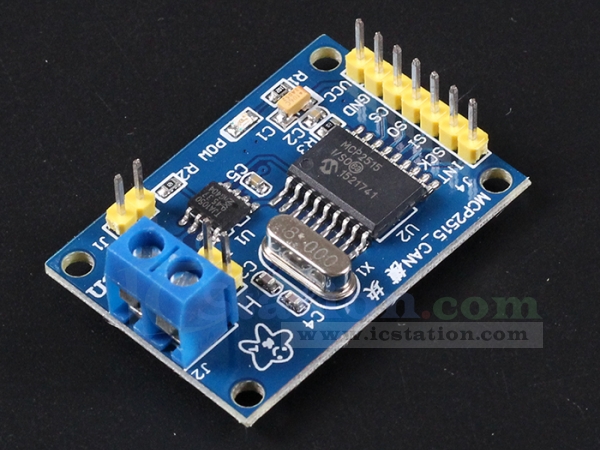 Btw, how did You figured out the boud rate?

That looks like it will work. I've never used the tja1050 but it's pin for pin compatible with the can tranceiver I use. I found the baud rate out in a google search; someone else had a webpage with a bunch of information already available. Another method would be to hook up an oscilloscope to the can lines and see what the speed was.

Are you able to read track metadata from BT device?

Yes, the RN52 supports AVRCP protocol. The next step is to figure out how to send that data to the car's display instead of it saying "CD PLAY 01" :)

Maybe you can check if the HU supports phone modules, then you can display them like sms.

Additionally, the placement of BT SOC is not really good as far as I see. You should let antenna stay apart from pcb. Also you may work on powering a bit more to have more clear sound, in this case you may have ground loops.

The Saab Information Display (SID) in this model can display text, but it doesn't support external text (from SMS, radio, etc) but I think there might be a way to "spoof" the radio into displaying custom text.
I haven't had any reception problems with the current layout. The most a phone will be from the module is ~10ft.
The volume level could be increased with some op-amps, but right now you need to have the phone & module at full volume, which works without any problems.

Such a great project!

I have a Fiat Punto and currently run a 3.5mm lead to the CD Changer port on the stock head unit, which allows me to plug devices in via heaphone ports etc. Not ideal.

I've always wondered about whether a project like this exists - great to know it is possible!

In this project you'll learn how to name your Bluetooth Module and detect fails in the working of your bluetooth.
Project Owner Contributor

How to change the Bluetooth Module name easily wit