XORYA is extremely low cost game console that consists of just 1 chip (in its base configuration) - DIP28 integrated circuit PIC32MX170F256B (32-bit MIPS core, 256K flash, 64K data memory) and a few capacitors and resistors with total cost below $5. XORYA is connected to NTSC TV through composite video input and it's running applications created with help of open source game library XORLib ( https://gitlab.com/shaos/xorlib ) specifically developed for this platform. XORYA may produce a number of black and white video modes (with 640x200 maximum resolution) and (potentially) stereo audio with 15734 Hz sample rate (through PWM). Also with external crystal 14.31818 MHz and 2 more capacitors it may produce color NTSC signal similar to "composite" mode CGA with 16 colors (actually 15, because 2 gray colors look the same) and resolution 160x200.

Project is based on "NTSC TV interface" examples from http://hackaday.io/project/2032-pic32-oscilloscope by @Bruce Land (Cornell University), which are based on examples from "Programming 32-bit Microcontrollers in C: Exploring the PIC32" by Lucio Di Jasio. I switched text mode to my own 8x8 font and eventually dropped support for original 256x200 resolution and focused on newly introduced 320x200 and 640x200 video modes. Adding color to generated NTSC signal was inspired by KenKen's work, but nothing from that software/hardware was used here because goal of my project was not about getting perfect colors, but to get simplest (and cheapest) circuit that generates a number of distinguishable colors on NTSC TV. Accidentally I reinvented "composite mode" used in earlier CGA (when every 4 black and white pixels in the row confused NTSC TV to detect different colors depending on pixels pattern) with the same resolution 160x200 and very similar palette (actually 4 palettes of the same 16 colors are supported: 0 - original XORYA palette, 1 - palette similar to CGA composite mode, 2 - palette similar to Tandy composite mode, 3 - palette similar to PCjr composite mode, where "similar" means color phase is shifted back about 30 degrees versus original): 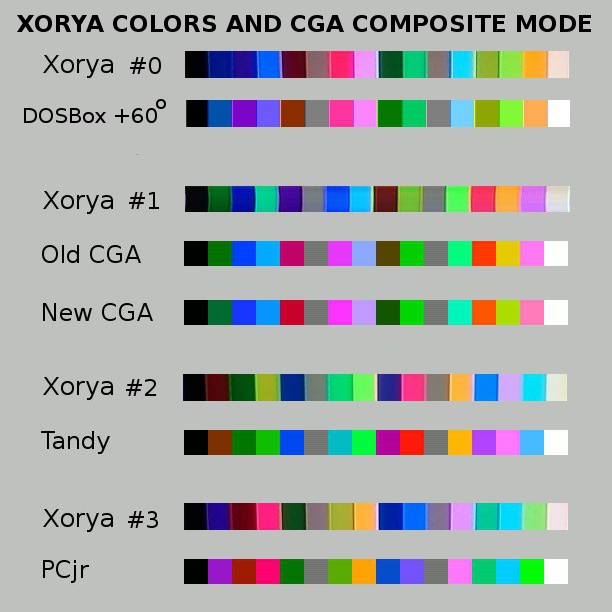 To make video memory compatible with CGA I also changed 32-bit DMA-to-SPI to 8-bit (because SPI sends higher bit first and in case of 32-bit it works as big-endian, but it has to be a little one) and surprisingly it did not negatively affect performance (text mode even became 43% faster because now it is not required to mask single byte in the word to write a character). And before adding project here the progress was reported on DangerousPrototypes forum.

Current schematics (for generating color NTSC signal, no audio or inputs yet) with external crystal 14.31818 MHz (it must be precise): 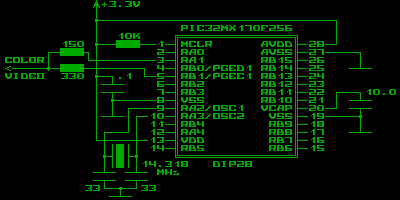 It generates this waveform with "color burst" in the beginning of every line:

This version is a little bit faster because it's running on 60 MHz core frequency instead of 57.27272 MHz as previous one.

Also note that 6-pin header is required if you need to reprogram the chip by PICKit3:

To build something with XORLib you need MPLAB.X IDE and XC32 compiler (but NOT new one, it has to be v1.34 or older because of plib.h - old versions could be found here ).

Cheapest possible implementation of Xorya is Xorya Touch where controls (both gamepad and buttons) are drawn by copper on PCB itself...

Hi! I really like your schematic diagrams! How did you generate them? Is this circuit outputting its own schematics on a TV screen?

It used nedofont that is also used in Xorya, so technically yes - Xorya may output its own schematics on TV screen in 640x200 black-and-white mode ;)

I can try to port XORLib to #2018 Hackaday Superconference Badge

Wow, that would be epic! I'd love to see the badge doing some handheld gaming like this!

Problem is that TFT controller on the badge should receive sequence of at least RGB565 values, but XORLib must have videomemory inside of PIC32 and it can not be RGB565 because it has only 128KB of RAM onboard (320x200 with byte per pixel is 64000 bytes already), so videomemory will be still low number of colors like 2 bits per pixel or 4 bits per pixel as in original Xorya and then I should convert sequence of low-color pixels to RGB565 (in software!!!) after every change to feed TFT controller through DMA...

Is the 10k resistor required if we connect MCLR directly to the PICkit3? Can't wait to try Mandelbrot.

I'm not sure - I always have it

How are you getting 16 colors from one GPIO?  Are you using CTC's to phase split the color burst freq into exact 22.5 degree sectors or perhaps just roughly timing with CTC/INT and relying on the CPU clock to maintain sync to color burst (sub-carrier) freq?

No, I simply send bits out through DMA and SPI (so CPU is involved only in setting this up in the beginning of every scanline by interrupt) with precise frequency 14.31818 MHz and color burst zone is also part of videomemory - it's like 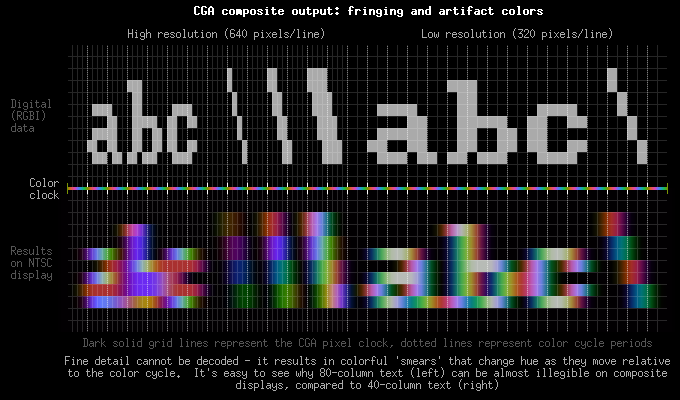 One (4 bit) cycle per pix and hence the boundary bars between colors. This could work much better at 2 or four times the clock freq and repeating the bit pattern 2 or 4 times but short of PLL it would be hard to generate these frequencies.

PS: The color boundary bars are predictable and you could code to prevent them by adding / removing bits that keep the chroma in an even transition rate and at the same time balancing the phase (as best can be done with 4 bits).

ie going from color 1000 to color 0001 does not need chroma correction as both are 1 but sending 0100 0010 for adjacent pixels may correct the phase for the boundary bars.

There is a limit with composite TV signals because they were bandwidth limited to get many channels over air. Both NTSC and PAL have a sound sub-carrier that is not much higher than the chroma/luma so the input circuitry in the TV has cut-off filtering.

The old retro computers squeezed as much as possible out of TV's before abandoning them and going to monitors. The last standard that TV like or compatible was CGA.

Compounding these limits, is the fact that you are using a square wave. It is in fact the attenuating effect of the boundaries of the TV's input filtering that are somewhat 'correcting' this generated signal so that the following chroma/luma circuitry can decode it.

By changing the duty cycle so that you have a very low or very high duty cycle you are relying on a much higher frequency component that may well me lost in the TV's input filtering. This is the limit.

The advantages of the the circuit here http://www.ze.em-net.ne.jp/~kenken/en/videogame.html are that by having a simple DAC the output is less square like and more sine like. The second advantage is that chroma and luma can be generated separately.

Your circuit has no chroma control. The resulting chroma from your circuit is simply the number of '1's in each group of four and that is why you have bands between colours.

So 0011 has chroma of 2 and 1100 has chroma of 2 but the four middle bits between the two nibbles  (11 11) have the chroma of 4 and hence the bands. At the same time the phase transition is averaged giving a different color.

It would very interesting to test this with PLL and CPLD/FPGA but for me I am going with VESA standards for (x)VGA.

It will very interesting to see how far you can go with horizontal pixel resolution. PAL ('I' and 'BG') has 625 lines interlaced 2:1 ie 312.5 lines per frame offset by one line so it may give reasonable results. Not all of these are visible.

Good luck, I will be watching keenly to see how you go.

In the last 12 years I'm writing software for TV cable boxes connected to NTSC TV through composite video input (as one of the possible ways) and those boxes have max resolution 640x480 with 16-bit color pixels and I see this as a true limit of NTSC (480 interlaced of course). Also I came from SECAM world and I still remember as 625 interlaced lines look like with their 50 FPS (25 full frames per second) - anyway I like American 60 FPS better with slightly lower resolution (60 half-frames of course ; )

How about dsPIC? They can be clocked up to 80mhz, have a bunch of DSP accelerated functions already provided by Microchip.

PIC32 could be clocked up to 100 MHz - I simply didn't find proper multipliers yet to have NTSC color burst frequency and max possible CPU frequency...

P.S. dsPIC has only 16 bit datapath if I not mistaken

Wow, that Mandelbrot Set rendering is amazing. Even more so from a microcontroller. Excellent job.

this is really neat and quite impressive.

9.6k 53 54
Reimplementation of the retro game Space Invaders in an attiny for the 1 Kb Challenge
Project Owner Contributor