Figuring out the HV Module connections

Use a combination of six Nixie tubes with a 16x2 LCD display and Pi2 with Adafruit Proto-Perma HAT to display information.

PV Electronics were kind enough to sell me an HV Module to power the Nixies, which is not yet officially for sale on their web store.

NOTE: Nixies require about 170 volts to 'strike' the tube and make the [I assume] Neon gas glow. You can't just put 5 or 12 volts in and expect things to happen :)

I subsequently realised that I needed to find out how on earth this thing should be wired. After a bit of digging around, I found the answers I needed in a Schematic included at the end of the 'Spectrum 18' Assembly Instructions on the PV Electronics site. 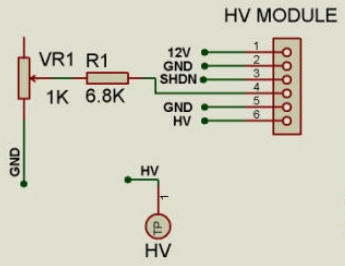 From this diagram, I could see that the input power needed 12 volts, and that pin 4 (titled 'Radj' on the PCB silkscreen) needed a fixed resistor [6.8k] and a variable resistor [1k] to trim the HV output. After a quick hunt around the 'net, I also learned that 'SHDN' was short for 'Shutdown'.

Figuring out the IN-14 Nixie Tubes and Break-out Boards