Ignore this ESP8266 board

I stole from every one. The huzza from Adafruit. Matts breakout board. Al1s board from here. NodeMCUs DevKit.

This will be my first http://dirtypcbs.com/ order and since I have ESP-01 and ESP-12 I wanted to have a board that could take them both. I fell in love with GVS rails when I saw them on someones project here. This board follows the usual rules:

Keep GPIO15 LOW (why did they even break it out in the first place?)
Keep GPIO2 HIGH (I've seen it everywhere but some do not specifically say that)

You could also get rid of the reset button, when you just unplug the thing and hit GPIO0 on plugging it back in (HIGH is RUN and LOW is FLASH).

Watch out for the ADC, MAX is 1V (not 1.8V as stated before). That's why I've added a voltage divider.

LED is on GPIO0 now!

There is no extra serial/usb thing on it, cause it would have added extra costs and for experiments it's okay to use a dongle and finished projects wouldn't need programming anyway.

roughly calculated - used parts of packages with various prices (price per part payed multiplied with parts used - you're smart, you'll probably get it just by looking at it) - EUR 5,80 that's around USD 6,50 - with an ESP-12 :) 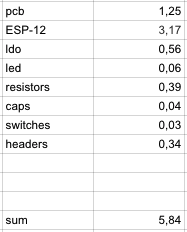 Kudos for having no shame lol, thats funny dude. :-)

well it wasn't anything I sold anyways... :)

But I bought one of these on AliExpress! That wasn't you?!

@Jarrett  that would be pretty awesome if true!

The first thing I thought of was how much this reminds me of the V4 version of Ez-Robots board.  Any good at Pi code? python

Probably the only board I didn't steal from ;) I've made a list of projects where I took inspiration from. I'm really bad at coding in python, anything I did on the PI was with wiring.

Good work! Do you sell these boards?

Nice case. I really like the idea of the colored pinheaders. Are the black and red 3,3V and GND? You could use push buttons with a longer shaft (like these: http://www.reichelt.de/Kurzhubtaster/TASTER-9305/3/index.html?ACTION=3&GROUPID=3278&ARTICLE=44586&OFFSET=16&WKID=0& ). So the buttons are reachable without a screwdriver.

Thanks :) using sick-of-beige from the dirtypcb/dangerousprototype gang was a good idea you had! I wanted the yellow/green thing because of the blue LED on the GPIO. Yes, red is VCC, black is GND and yellow is signal (colored GVS headers are awesome) - I've already ordered buttons with longer shafts. I have to move the power supply pins or swap them with usb micro.

Could you please provide a link to your board (with the 12e) on dirtypcbs to make it easy for us to order? Cheers, SJF

People are getting away with not pulling GPIO 0&2 high because the pins have internal weak pullups that are enabled by default.

There's some more info on the bootselect strapping in some of the Espressif documentation. GPIO2 pulled low enables some of the SDIO modes which are not usable with these modules the way they are connected (SDIO lines are already connected to the on-module flash chip).

for the ADC voltage - if you added one pair of pads - in parallel with the voltage divider resistor - and indicated what the value would be for a 3.3V divider - that would be useful IMHO.

Hey, thanks for your input! There are labels for a 1.8k and a 1k resistor on it on the latest revision, but that was based on the assumption that a 5V max signal was given to an 1.8v adc. Since I've learned it's more likely a 1v adc you should be fine with a 2.2k - 1k setup for 3.3V. I probably want to check the power supply, so a bigger ratio was what I needed.

Nice. I, too am a "cookbook" engineer......a little of this circuit, a little of that, mix together to get what I want. I probably have a library of 2000 different circuit diagrams dating back to the '70's. I just wish I had more time.  Wait a minute! Did I see a time machine circuit somewhere?

I want to be a time lord :) having a time machine would be great, but not having the time to use it, would be unacceptable. If there's a circuit for it, please prolong my life and anyone else's ten times or more.

So got the new board yet? and does it work?

I'm still waiting for the first boards to arrive... thanks for the interest and skull :) I hope the boards will be here before I'm gone for 4 weeks.

How could I ignore anything you do at HaD? :)

hehe :) thanks for the skull and following! I wrote this because there are so many boards here and I stole mine together :) and people don't like to be told what to do, so yeah - it's also a trick to get attention :D

It was between this or 'Me building other people's projects... with a vengeance'
Project Owner Contributor

Another installment in the series 'Me building...'

Didn't like the metal necklace, so PCB art was the way to go.
Project Owner Contributor

Creating a double-sized Teensy 3 to allow easy access to the pins that aren't reachable on a breadboard.
Project Owner Contributor