Home security project based on atmega and ardunio. MQTT gateway for data gathering.

Over past few months I have prepared new version of OHS gateway called simply 2.0.4. It is new iteration of my 2.0 version fixing layout defects and integrating new features. Here are the specifications: 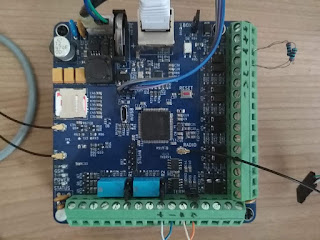 The main changes is GSM part, which now sports 4G/LTE modem from SIMCOM SIM7600x, and double the FRAM capacity.

SIM7600x is decision that I've been thinking about for some time. On one hand the module is quite expensive compared to 2G modules, but on the other the 2G is becoming phase out in many countries. It is quite a dilemma, but I decided to invest into module that will have long life expectancy. There are always more difficulties. One is that the hardware needs to be able to speak with 1V8 logic presented on module, which I have solved by adding MOSFET level shifters. And second, that the module is bigger, and I neede to place it on the back of PCB. I have also removed the mini SIM holder, and replaced it with smaller and more up to date micro SIM.
There are several versions of SIM7600 module. One global, most expensive, that is supposed to work in all regions. And the regional ones for Europe, North America, South America, Asia and so on.

FRAM size has doubled for the reason to store some larger data needed conveniently.  First half (64KB) is used as before to keep 4096 log entries for gateway logger. Second half will be available to several new functionalities I plan to add to gateway software. I was also tmepted to add a uSD card, but it is easier to store data on synchronous SPI FRAM, then to access uSD with file system that can be damaged or not present. Not to speak about wiring.

Other changes not so visible are RC circuits on battery and power signals of UPC. These are nicely filtering out the spikes that are sent to gateway, eliminating the need for software compensations. Without them the gateway has wrongly reported AC power OFF signal.
Also there is now a shotky diode, to add polarity protection to RTC battery.