A very exciting (and somewhat sleepy) update -- with the very first (2D) image from the scanner, of the top of a peach! 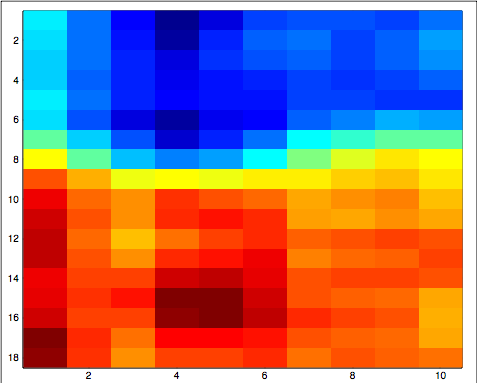 I had the chance to complete the firmware for both the imaging array and motor controller, and acquire the very first image from the array! While I'd previously put together firmware to test the imaging array and motor controller, this past weekend I added a serial console to each that allows commands to be sent from a host computer, processed, and returned. This means that the detector array can be calibrated and used to acquire data remotely, and that (in concert with the motor controller) can be orchestrated to take full images!

I put together a quick script in Processing that would connect to both the imaging array and motor controller over usb->serial links to their respective Arduino controllers, and orchestrate the process enough to acquire the very first data, shown above! 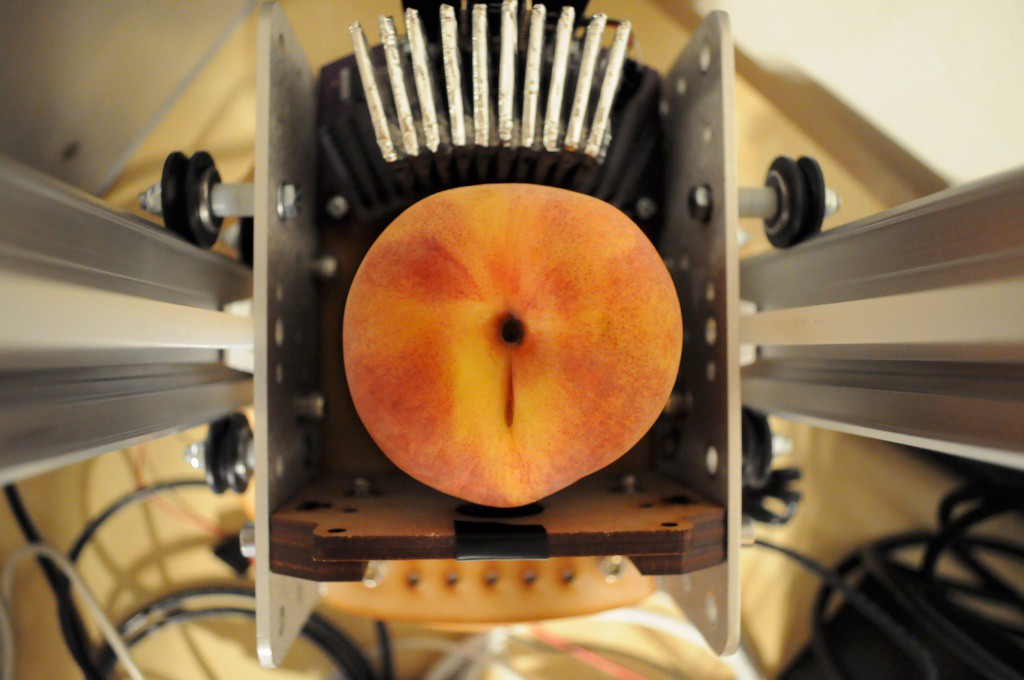 I placed a peach in the machine on the sample table, and imaged from the center of the peach to the top. Only 10 detectors are populated, so the image is limited to 10 pixels in one dimension, but this can ultimately increase to 16 pixels after the last six detectors on the periphery are populated. Still, only 10 detectors was plenty to observe some basic structure.

A few weeks ago I had the chance to put together the basic design for a mount for the Ba133 radioisotope source, that would both allow ample shielding, and be easily removed and stored elsewhere during the debug stage. I'd accidentally cut the aperture for the radioisotope source a little small (and haven't had the chance to recut it), so in these pictures the source is secured using... tape.

While I was designing the source mount, I was also able to put together a laser cut bearing mount for the table, so it's now much more stable, and needs only another design revision or two before it can be coupled with the cylindrical sample container. 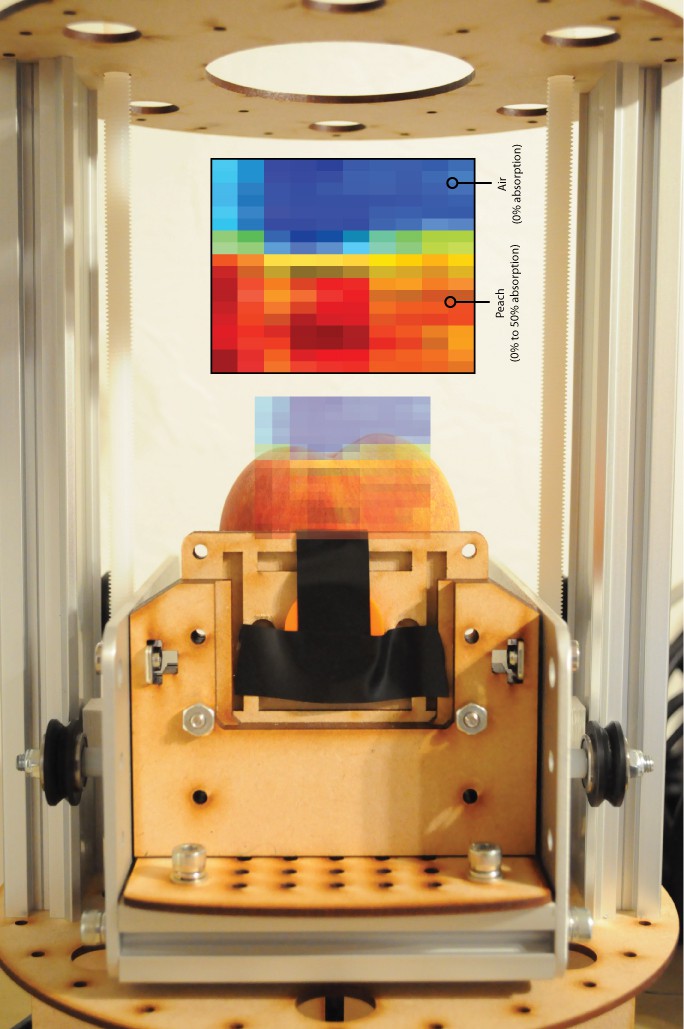 And here's the first data, overlayed upon the peach itself. It looks very good for a very first, barely calibrated image.

Due to the shot noise associated with using such an extremely low intensity source, coupled with detectors that have 11 times less (9mm^2) area than the original OpenCT using the Radiation Watch Type 5 detector (100mm^2), there is a little more noise than I was expecting, and the integration times have to be longer than I was hoping to reduce the variance as much as possible. I found that a 5-minute integration time was okay to pick up the larger contrasts, and that smoothing the image using a 3x3 box kernel helped reduce what is essentially Gaussian white noise in the image. There is clear contrast between the air (blue) and peach, but also a clear contrast between the middle of the bulk of the peach (red) and the top of the peach (yellow/green), which has much less material to go through. I'm not sure if the peach pit is visible, or whether the more absorptive region in the center is just an artifact, but a few more scans will likely sort this out.

In all, an integration time of 5 minutes per 1D row is about 2 to 3 times as long as I was hoping for. I haven't yet constructed a simulator for this machine, so it's not immediately clear to me if using many of these low-SNR images for tomographic reconstruction will functionally increase the SNR of the slice that's being reconstructed (like oversampling), or if the tomographic reconstruction process is particularly sensitive to noise, and the integration time has to be increased even further to have pristine images going in for reconstruction to be successful. It's likely I'll have a sense of this soon, as there's a fantastic looking bell pepper that I'm excited to scan as soon as time presents itself.

My apologies for taking so long to update! After five years of being a Postdoctoral Fellow, I'm very excited to have recently started a non-tenure track Research Professorship. The teaching load in addition to my normal research has been keeping me exceptionally busy, and so working on the CT scanner has been a little slower than I'd hoped -- but certainly no less exciting.

Blowing things up, and an image of the grape

The quest for low-noise power supplies

Wow, congratulations Peter! You must be very pleased.

Do you have any idea how long it would take to accumulate an image if you used, say, cosmic-ray generated muons instead of the barium-133? I'm thinking you'd need a lot more detectors and some fancy timing circuitry because you wouldn't have control of the direction of the radiation source. But I seem to recall that somebody discovered a hidden chamber in an Egyptian pyramid using cosmic ray muons, and there is a system called COSMOS that uses cosmic rays to measure soil moisture levels...