What will we do next.. Well the same as last year, with some changes

I had another crazy work year, so i was super behind on the Badge this year, i finished the eagle design a couple of weeks ago, and the PCB's arrived on Friday from DHL.

I always run into the issue of scale when doing boards in eagle, and some of the logos didn't turn out as well as i wanted. In fact some of them (ours) are so subtle as to be called into question of existing.. So next year, lots more print outs., and possibly a larger badge

Grabbed up all the spare components from last year, only missing the SMA diode( reverse protection and voltage drop) and the logic level inverter.

I bought this battery charger from CVS or some such in San Francisco when I was at GTC, after a few days all it did was shine the LED's continually so I let it run out and decided to take a look inside, after opening the case carefully (threw it against the concrete floor) opened it to reveal this, oddly i have that same exact board from an aliexpress binge last year, but i digress.

cool, as expected the 18650 and a charging circuit, so i carefully binned it , since who knew the state. Later I realised i know where I saw an SMA diode looking like an RP, so grabbed it back out of the bin , removed the diode and back into ewaste it went. 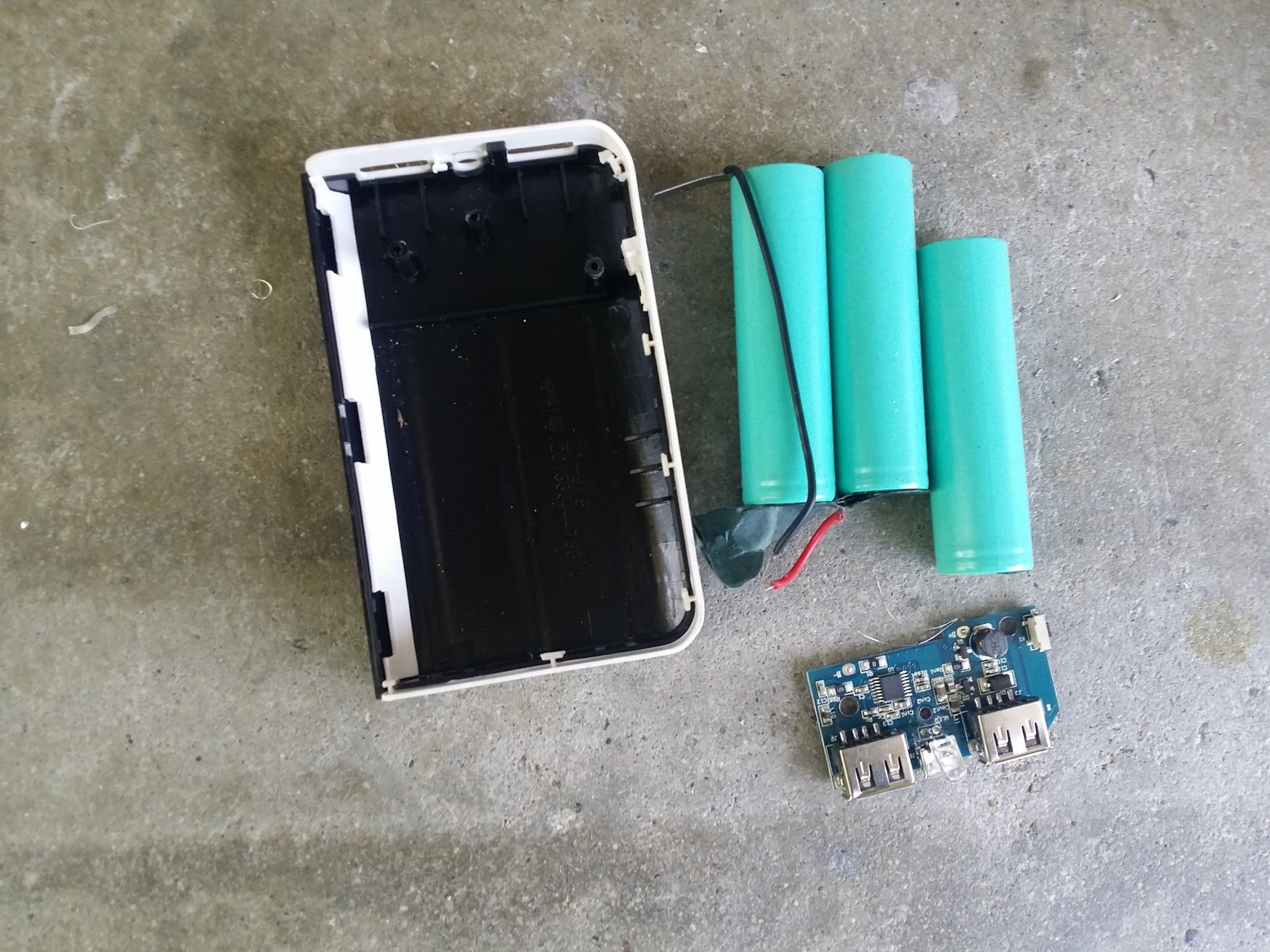 Next was the level shifter, i thought i had a bunch lying around but nope, I had one board from last year ( i never actually got a full working badge as i swapped mine out with someone who destroyed theirs, which is now mine) it had a CPU, one LED and as luck would have it a level shifter, so pulled that off. 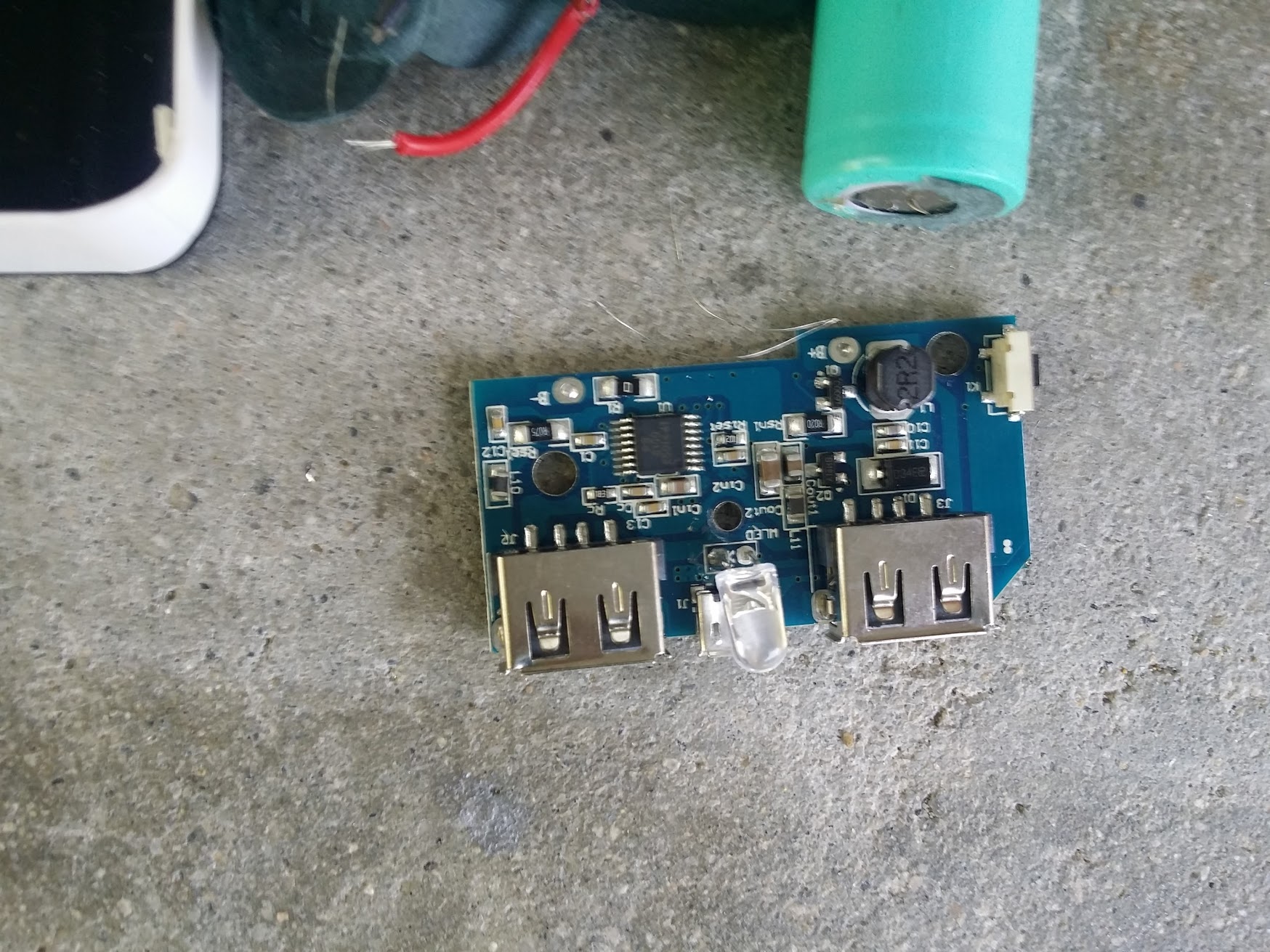 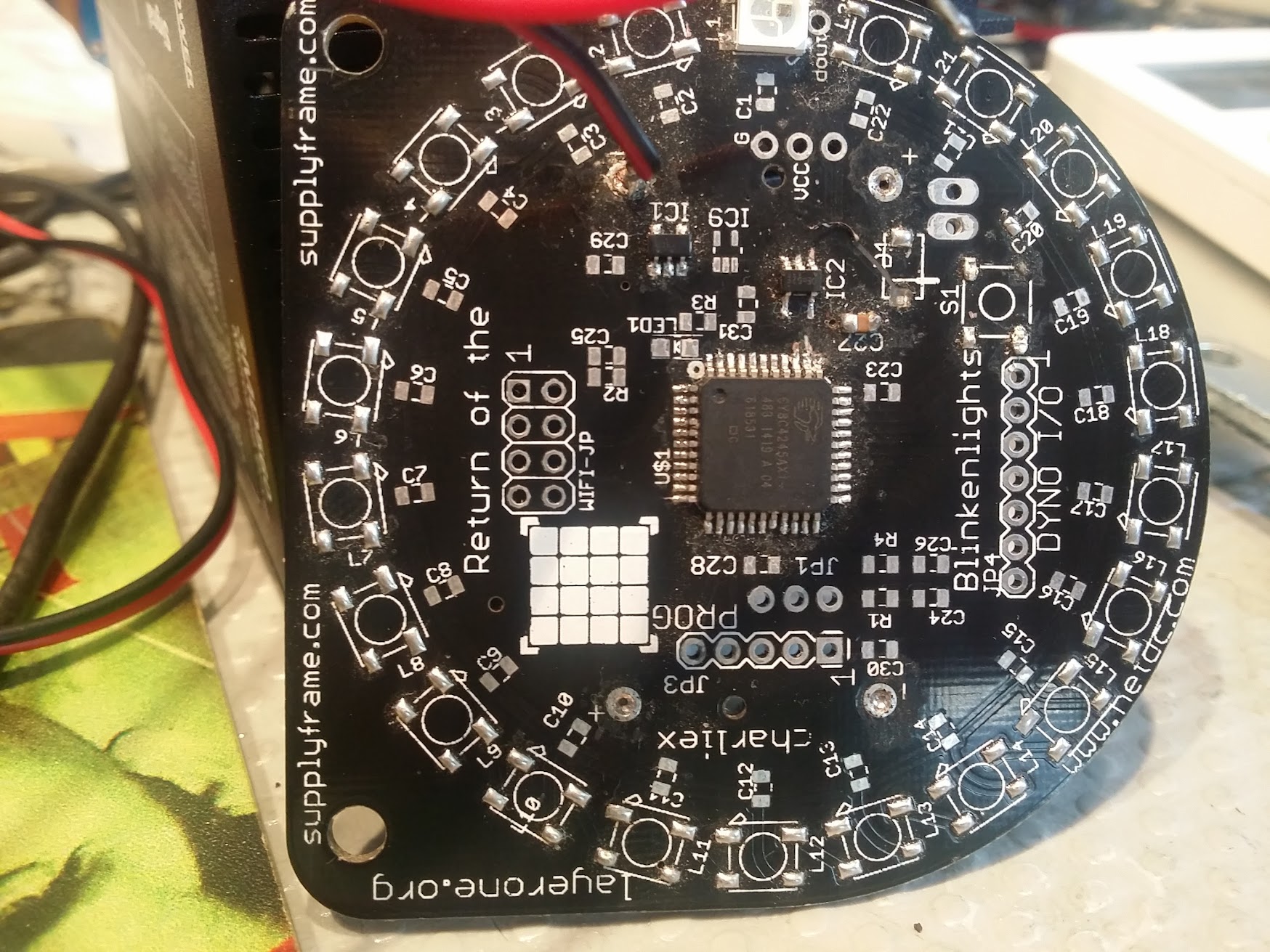 Great now the build out begins. 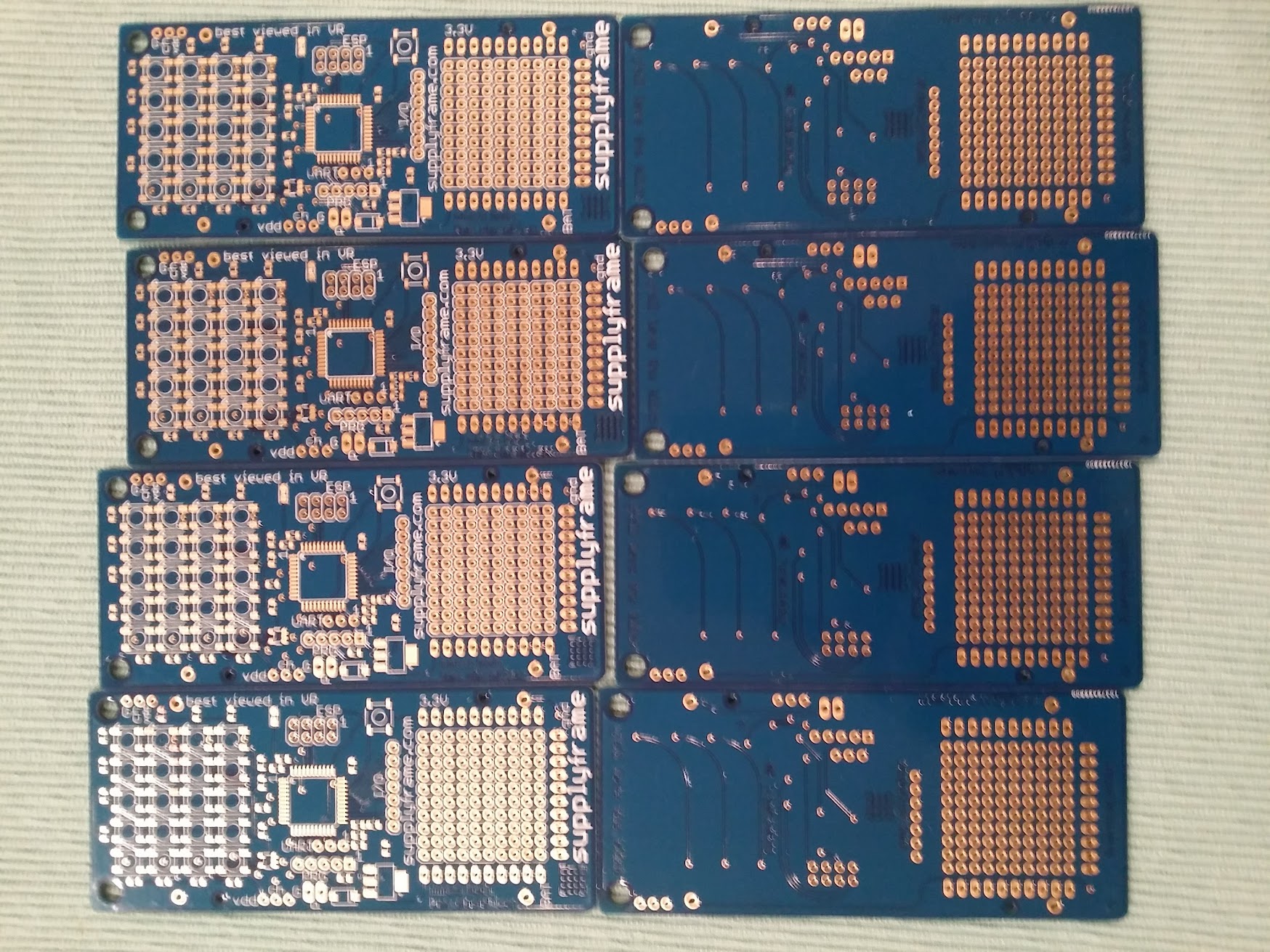 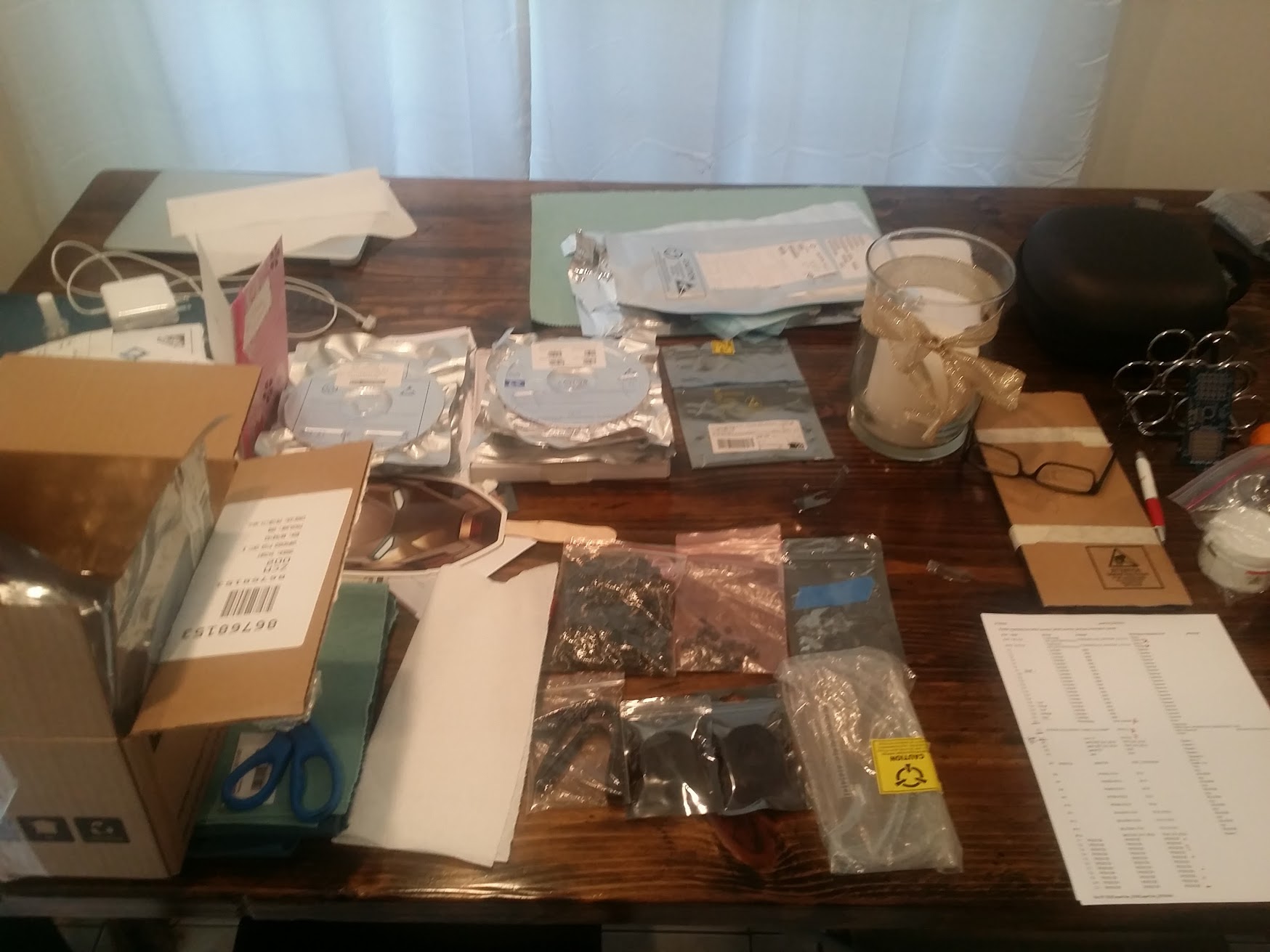 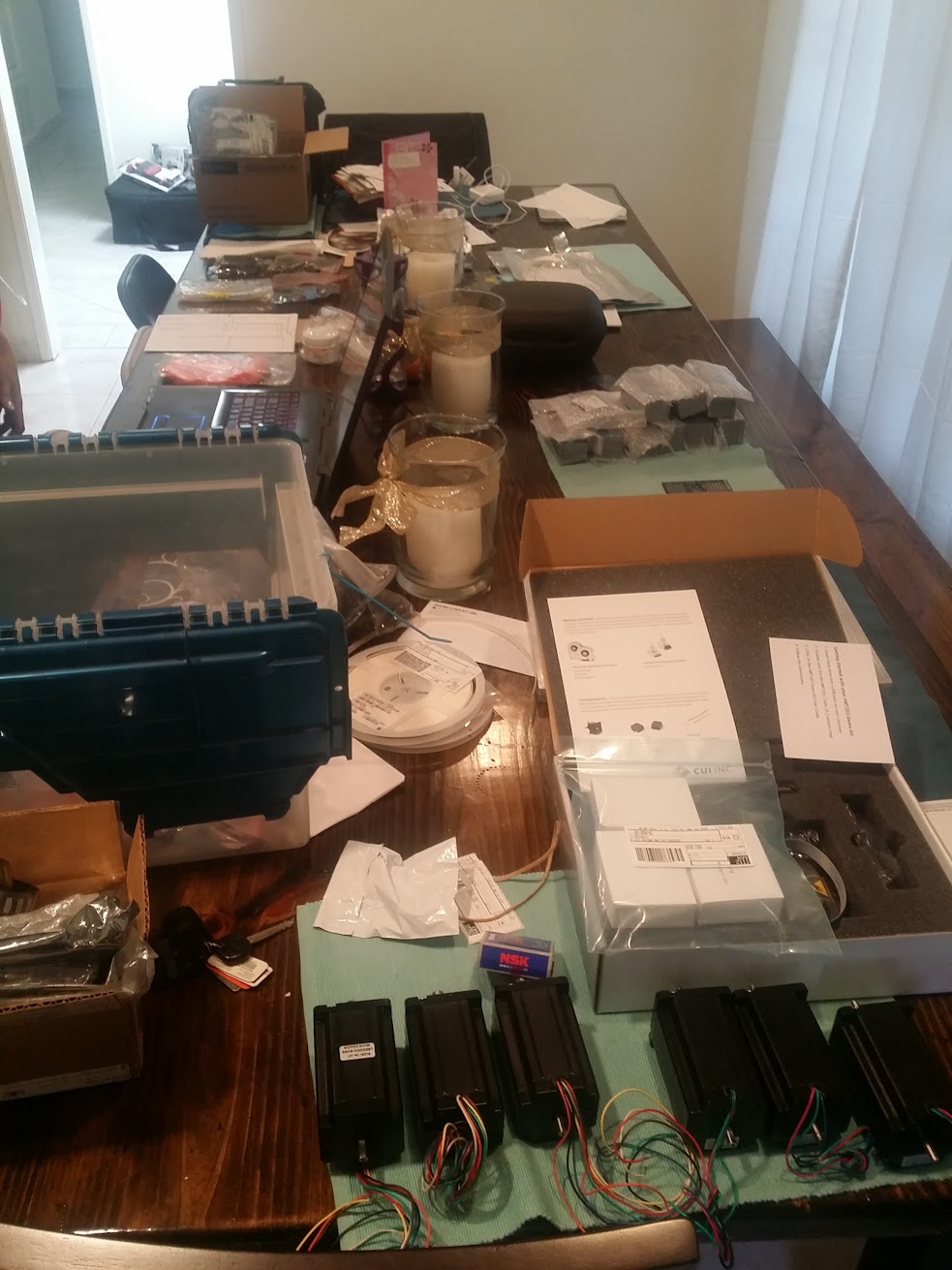 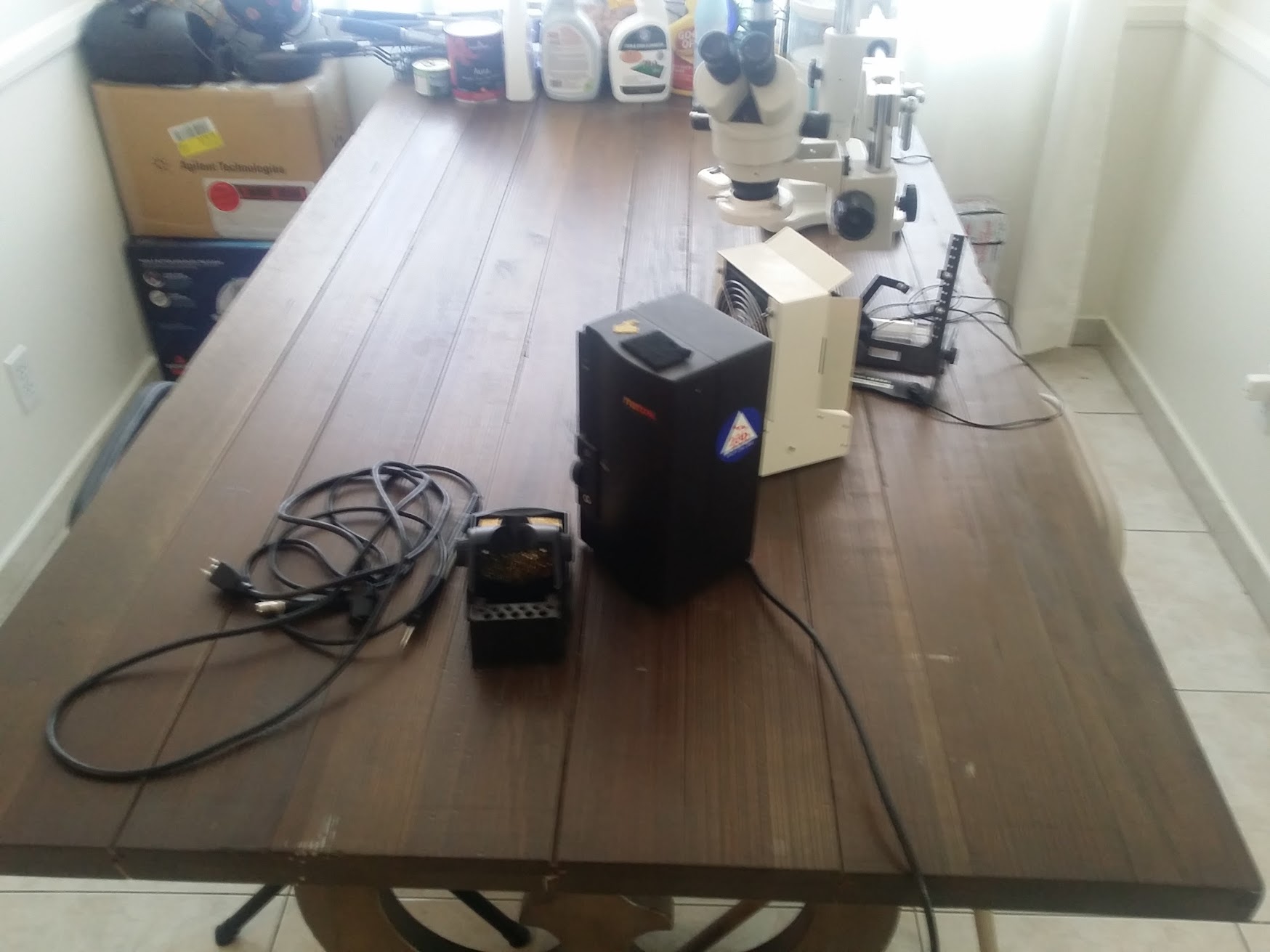 clear a 10cmx10cm space in the garage 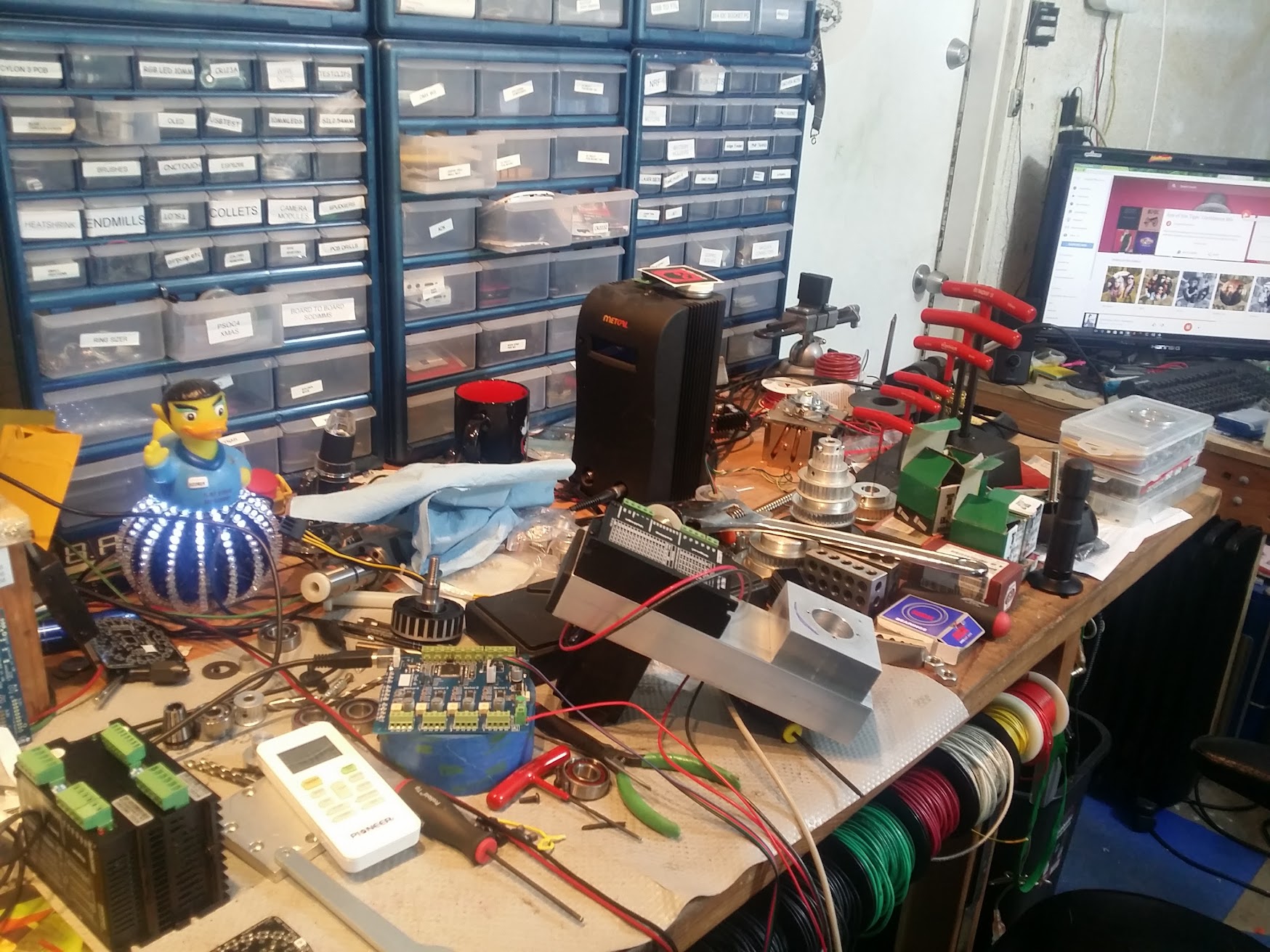 build the minimum components to get it to work, or so we think. 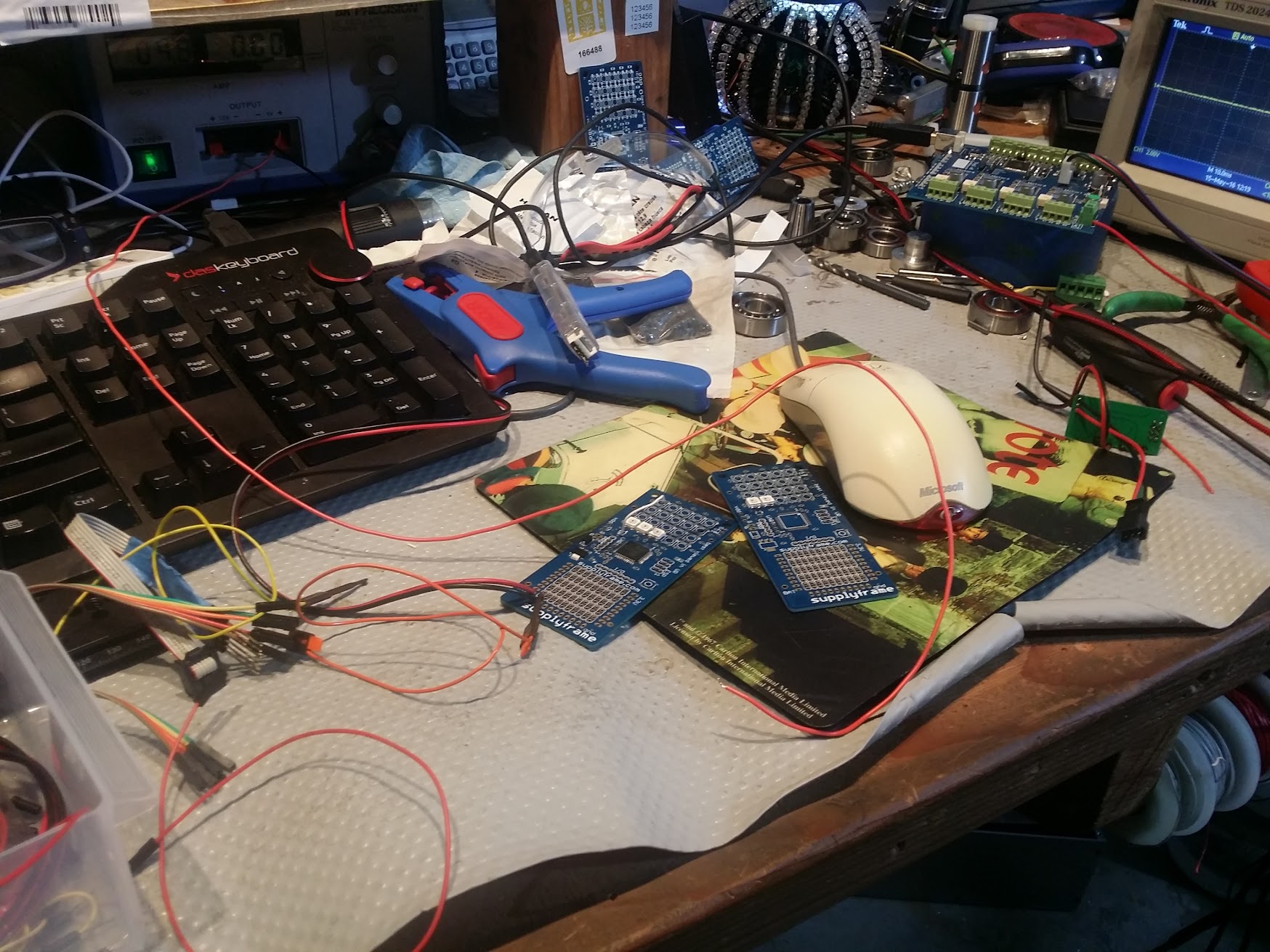 Wait, that board from last year i ended up with it, because it didn't work.. check level shifter. yep in but no out... OK find another, don't i have a level shifter on my old Xmas lights, yes, same package , yep! install it, nothing...

Ok stop think, the problem with the old Xmas lights was they ran 400khz vs 800khz, why, slew in the level shift, because transistors and caps, not an IC.. so what was that IC, wait that is actually the 3.3V VREG.. ok damn.

CPU's working, its doing the right thing. These boards can be daisy chained together, so lets run one from a Xmas light controller board. 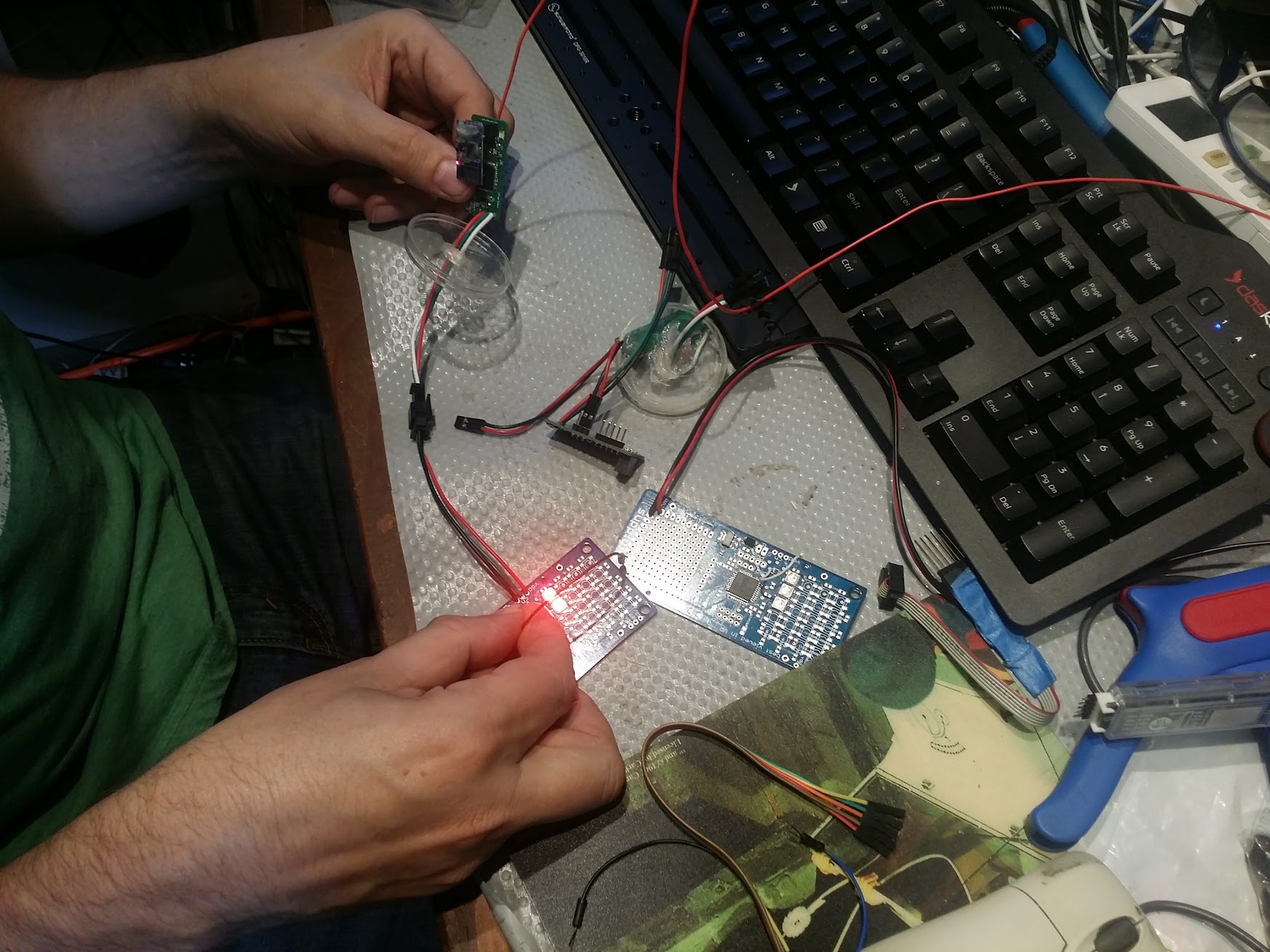 Success! OK lets try running everything at 5V vs 3.3V so no level shifter and jumper it.

We did find out what the problem was, so more on that later, capacitance was our first issue. 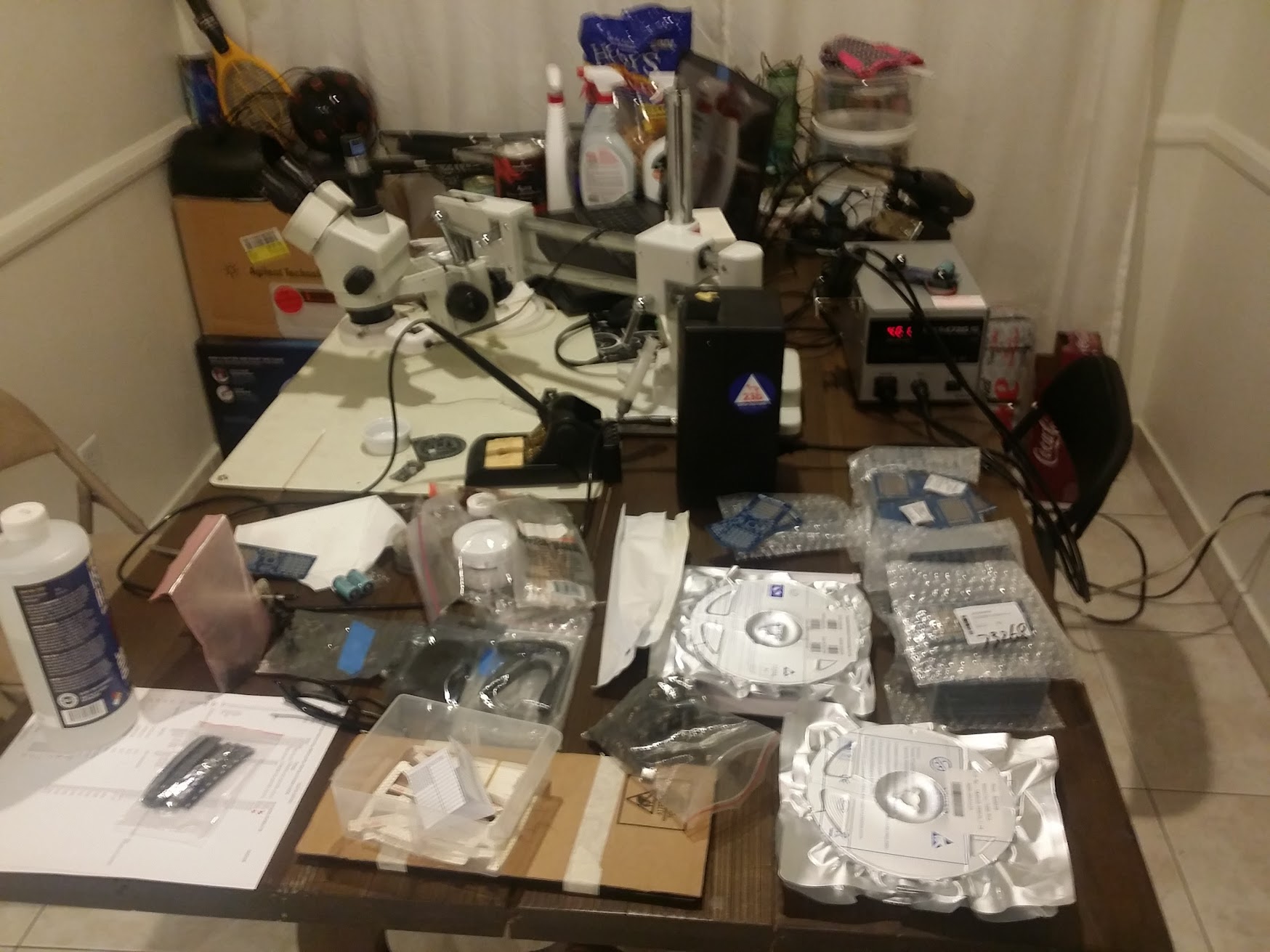 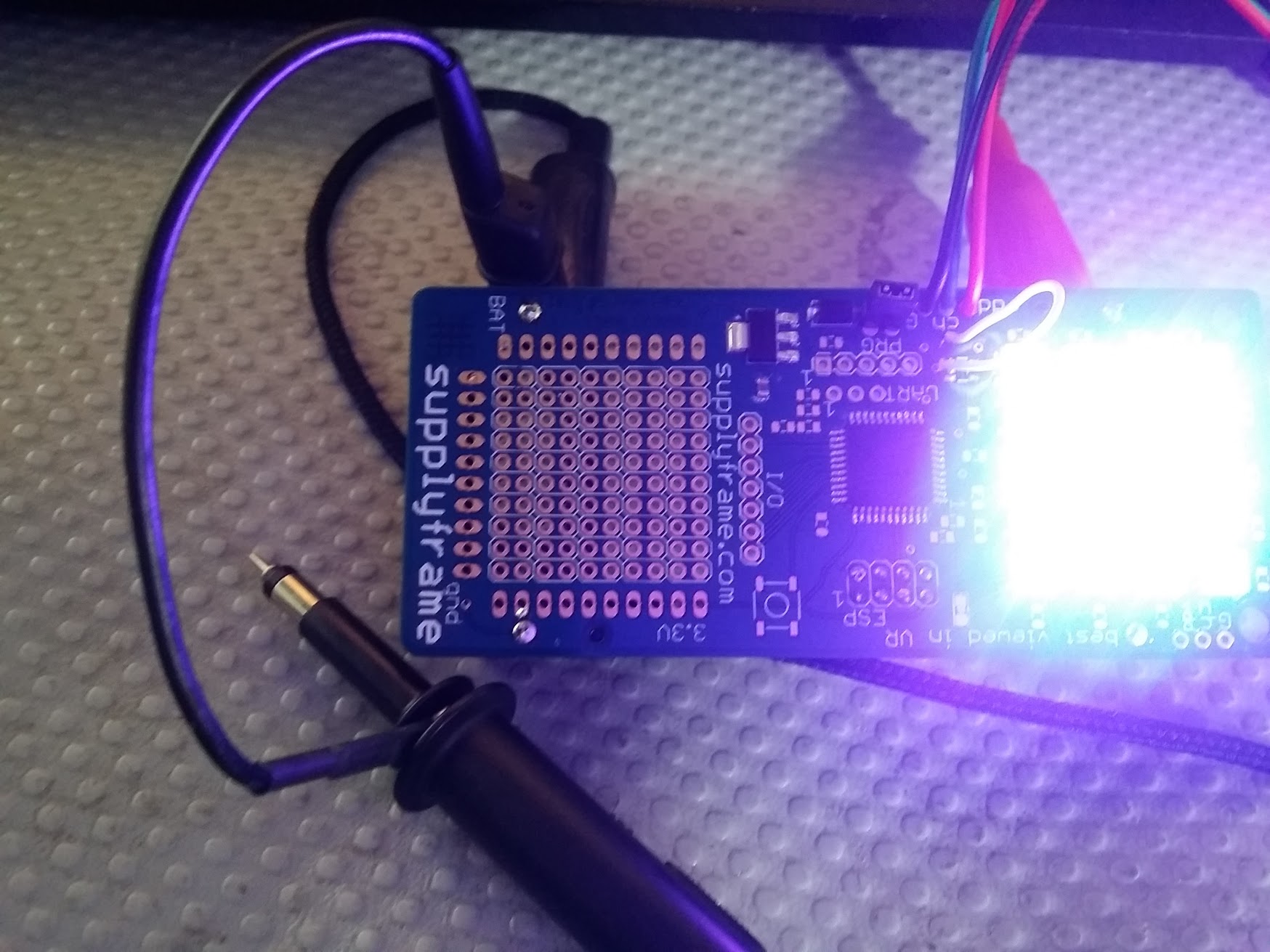 Next step getting the ESP8266 to work, i flipped around the connector compared to the XMAS lights i had pulled up. (in my defence there was like 10 things going on as i was doing this) and discovered i'd made the connector so the WiFi would be at the back pointing out. So that had to be desoldered ( solder sucker added to tool table) and put back, did that, still nothing. Ahh right added the extra GPIO's so put them to HighZ and we also added RESET, so made sure they were OK, still nothing , power LED is on now and the blue light is blinking. So it appeared to be working.

OK Scope out check all the connections, seems to be OK but not working and ESP has been verified. Go back to schematic, this is Sunday morning so a lot less going on, and i think wait a second isn't that the very first rev of the xmas board that had the wifi going off the edge, yep, sigh so i had gotten it the right way around, desoldered the 4x2 idc header again and reinstalled, hey look its trying to connect to the WiFi , reset loop. Voltage issues, i suspect noisy as well since the ESP hates noisy power and i'm running it off the bench, the LEDs are working mostly but wrong colours and bad data. Scope on the power supply shows it super noisy ( I really hope those eBay AMS117 VREGS we got are good)

So at this point i'm sure we can make it all work, so sigh of relief that we don't have to re-spin the board

Yep noisy , drops as it changes modes and fires up the WiFi, add a couple of caps to the power rails and it all settles down. Works as expected.

OK so the batteries we test it out and it works, then mysteriously later when its unplugged and re-plugged it doesn't come on, no loose connections, check with scope all running , but nothing. Check the voltages, its about 5.6-6.7V which is too high for the WS2812B's they'll just stop running. The diode seems to be giving about .3 -.4V of a voltage drop, but who knows what it is so we'll just grab 1A/2A SMA's with .4 and .7 drops, we probably could have used a 5V VREG off the batteries, but want to try to maximise the battery life (and remember this all worked fine last year) but i think we'll try a VREG and see what happens. The ESP8266 is the biggest issue for power, it has a very narrow requirement and takes a lot of juice, but its optional.

All working, LED's are being controlled from my PC over the WIFI. 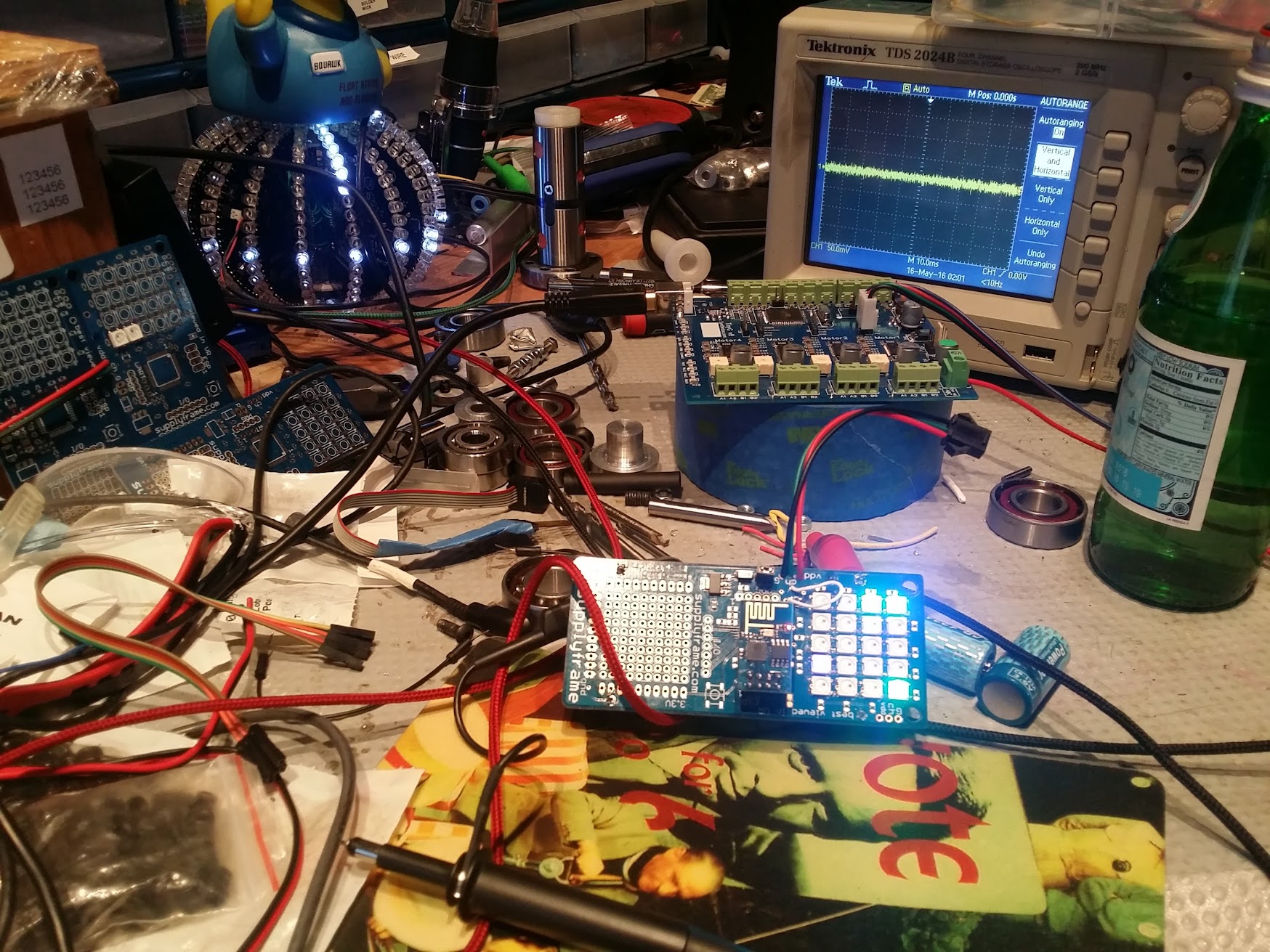 So we're ahead of last year, since this year the WiFi is definitely working vs it should work but this box of ESP8266s we got from china might be wierd.

Now on to finishing up the software side, and preparing a ESP8266 firmware update station, and testing the pick and place after it got rained on a month ago when the roof leaked.....

I'll upload the eagle files and software to github, but more or less the same as last year just with 20 LEDs (and not 25...) i did find a Linux PSOC toolkit on github

haven't tested it though.

So hoping this year we get to spend more time hacking on the software and making stuff at the CON vs building, since we're going to pre-build all the badges this time.