I have done a little bit of progress towards putting a Raspberry Pi on Tote. You see, I didn't want to make it communicate over serial, because I've done that already with ESP8266 (see previous logs). This time I wanted something more ambitious, so I decided to use I²C. As the first step, I completely rebuilt one of my robot prototypes, to use the new PCB and to also leave the top side of the PCB as flat as possible -- it only has the Pro Mini and the servo horns there, and all the rest is on the bottom side. I also added a voltage regulator giving a steady 5V, so that I can power the Raspberry Pi with it. The Pro Mini still uses only 3.3V, but it's fine with 5V, as it has an internal regulator. Servos actually work better at 5V, as it's within its parameters, unlike the 3.7V, which was a bit low. Finally, I replaced the 1S 3.7V LiPo battery with a 2S one, so that the regulator has something to drop from (the boost converters that I have all have a 500mA shutoff, so they are not suitable for powering 12 servos). 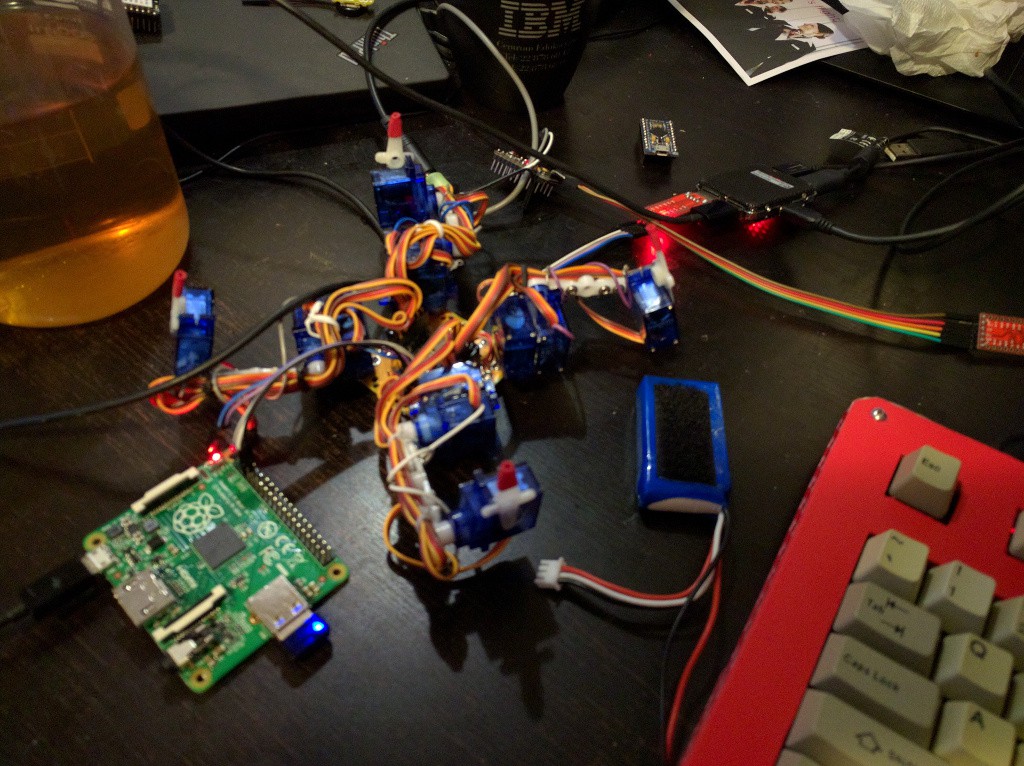 Next, I will need the code for the Pro Mini to act as a I²C slave, receive the positions and move the servos. For the moving servos part I just reused the servo.ino code I already had for Tote. For the I²C slave, I did something like this:

Nothing fancy or complicated, but it gets the job done. One thing I could have done easier -- I'm sending the positions as floats, because that's what the functions I already had were accepting. I could have instead make them work in µs, as most servo controllers out there, and use simple integers. I might still switch to that, if it turns out to be too slow, but for now this is good enough.

Next, I wrote some Python code on the Raspberry Pi side, to test if I can actually move the servos:

After some small tweaks, it works. By the way, funny how write_block_data requires a list of integers, not a string of bytes, as the struct.pack() produces. Oh well.

Once I had that tested, it's time to wrap it in a class and plug into my old Python gait code:

Then I assembled all the parts of the robot together, and it's ready to start walking: 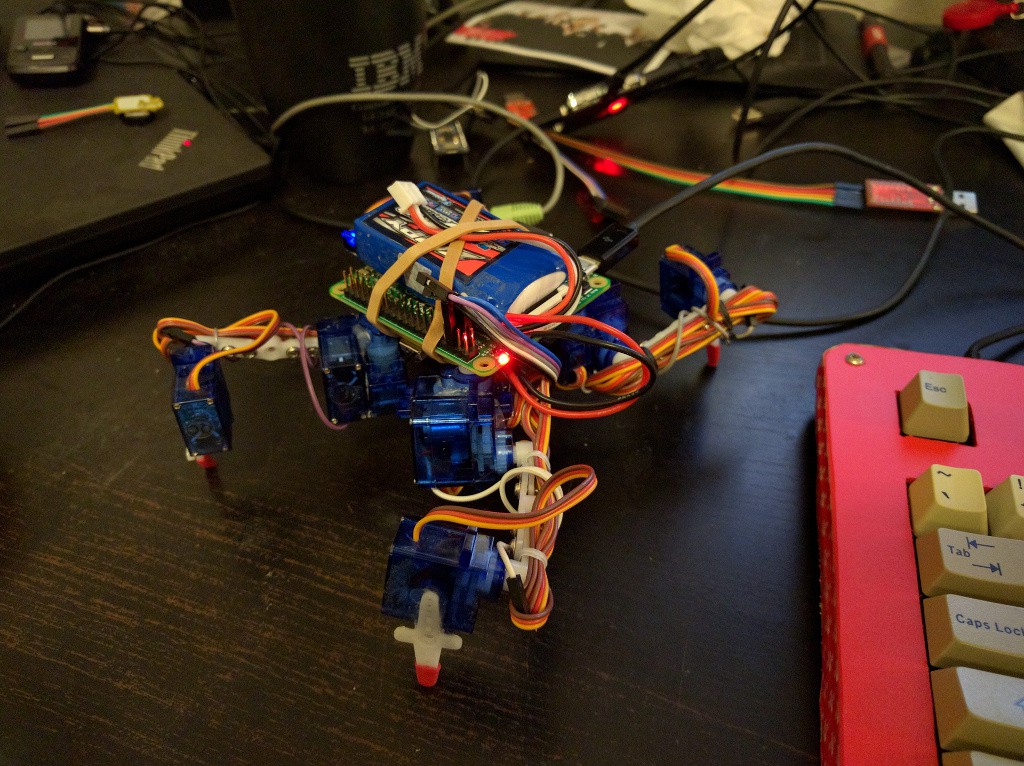 Except I decided to sit down and refactor the Python code a little bit (and I need to adjust it to a different servo configuration, etc.), so it's still some time until it actually walks.

You should totally check out this:

I think you can cut out the middleman and use the RasPi directly with the servos. Should save you some weight and complexity.

I've used this for a timelapse gimbal (project log coming soon, stay tuned), despite really wanting to hate it, it works great. I've tested it with 4 servos, and it's been perfect. Out-of-the-box, I think it supports 8, but can be set for up to 21 (theoretically)

Also here is a simple thing I wrote it to move servos with a CSV file of (X, Y, DELAY) inputs

I bet that would be very useful for setting the trims on the servos!

I know ServoBlaster, as I researched the available tools quite a bit when I built my first, Raspberry Pi based, quadruped robot Kubik, and it's awesome.

However, I have my reasons to keep the Pro Mini as the servo controller. First, I would still need to break out the headers for the servo plugs, second, the board with the Pro Mini doubles as Tote's body, third, I need to control 12 servos at once, which I didn't manage to do with ServoBlaster (althrough I gave up quickly), and finally, I'm a programmer by trade and I don't like to "fix things in software" in my hobby. The Pro Mini adds whooping $2 to the total cost, so I don't really consider getting rid of it a high priority. Plus, it also does battery monitoring with its ADC, which RPI can't do.

I was building this from scratch, I would probably try to use ServoBlaster or even use a completely different Linux board than RPI. But here I'm just showing how you can attach different things to Tote.