JACK is a development kit powered by an Atmel SAM D21; it's pretty barebone, that is it has just the bare minimum to make it work while keeping an eye on reliability.

JACK software is LGPL 2.1 (because it's based on the Arduino Core)

A JACK board flashed with the modded Arduino core will show as an "Arduino Zero bootloader (COMn)" port on your PC; if you can't find the board, but it shows as "Unknown hardware" you shall update its drivers with the Arduino Zero ones (you can find them in ..\your_arduino_path\arduino-1.6.5-r2\drivers)

Using JACK with the Arduino IDE

NOTE: as of now the USB CDC Arduino code is not working properly therefore when you upload a sketch on JACK, then detach and reattach it to the USB port, you will see an Unknown device. Follow the below guide to reprogram it.

Reset JACK to run the bootloader

The SAM-BA bootloader running on the Zero has a pretty nice feature that you can enable via code, called double tap reset; this feature allows an user to force bootloader startup if there's any issue on the user code. Here's how it works:

The time frame you have to double tap the reset button is not so big (you gotta do that before the USB Host tries to enumerate JACK, so it's less than half a second) but it's enough. This feature is pretty cool because it is helping me a lot in this phase where the USB CDC class of the Arduino Core is not yet working.

Video on how to start the bootloader here: 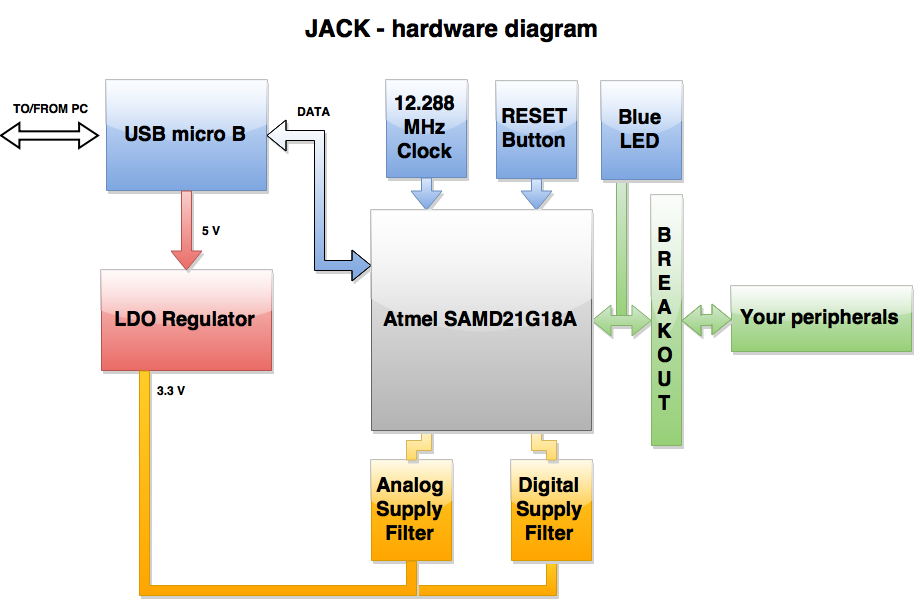 Can you help me?

I am trying on ATSAMD21 with native usb. My Arduino IDE version is 1.6.13 from Arduino.cc. And I have done what Jack said. But during burning bootloader, there is a following error.

This report would have more information with
"Show verbose output during compilation"
option enabled in File -> Preferences.

Hi. Its a good project. I have few clarification here.

1. You used ATSAMD21G18, But mentioned "SAMD21E processor" on your github bootloader page.
2. You compiled the bootloader with ATSAMD21E18A.

JACK has been discontinued for now. You can check HACK on my profile, which is basically the same board but without the 12.288 MHz clock and with the smaller SAMD21E

This is looking good! I hope you start selling these ;)

Hold on and never give up !

A simple guide for getting to know your Seeeduino v4.2 better, and to prepare your board for use with the Arduino interfaces.
Project Owner Contributor