Over the next few days I continued 3d printing parts and assembling them with left over bolts from other projects. While parts were printing I continued to research tracked systems and try to learn from the designs on excavation equipment and actual tanks. It was quite interesting to see how military vehicles evolved the track systems and how they were quite different from construction vehicles.

I was hoping to find some details on the actual tread profiles used. It seemed to me that the design of the tread should be fairly standardized and that depending on application you should be able to copy a commonly used tread profile. However, I was not able to find any great documentation on this. Knew that I could develop several different tread profiles in the long run, but for initial prototyping I wanted to come up with a tread profile that would work well on a wide range of surfaces. I was able to piece together some useful information and separate tread profiles into 3 categories. 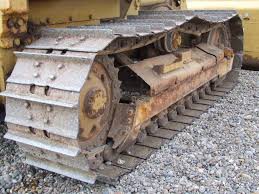 A grouser is basically just a metal blade that is bolted onto the track. It is used mainly on construction vehicles such as a bulldozer. The offer extreme traction on soft surfaces when going forward or backward, with the tradeoff of being hard to turn. They also tear up the ground and do not work very well on hard surfaces such as roads. These are great for specific situations, but not idea for a generic tread profile. 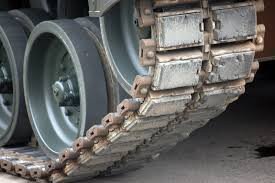 I was surprised to find that most tanks actually had flat pads on the treads. Sometimes it was one pad that was the whole width of the track and other times it was two alternating pads. Most of the examples I found showed the pads to be flat without any texture. When I really thought about it, tanks actually drive on dirt roads quite often. While they need be able to go off-roading, they also need to be able to keep up with convoys which would often be on dirt roads. 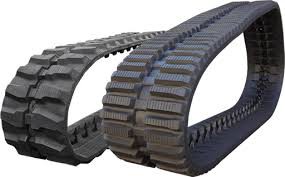 This is really just a catch all for the other tread profiles I saw. Most of these are from construction vehicles, snow blowers and snow mobiles. Almost all of these are molded rubber belts that may have some bands inside for added strength. Since the belt is molded the tread profile can be made to be almost anything. They typically have some profile sticking up with blunted tips, and a taper. Some have smooth tops, other have textures. Some have a profile that is the width of the track, and others have some alternating pattern. I could not find much detail about the connections between the profile shape and how it performed on various surfaces.

A few other notes 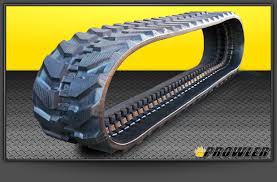 I saw quite a few profiles that had a V shaped profile. From what I could find this is helpful for muddy conditions. If the tracks are slipping because they are on a very soft surface such as gravel or mud the V shaped profile pushes the material out from under the tracks. As the track slips the mud is pushed out the side of the profile and then the tracks can grip on firmer material below the mud. However, this V shape makes the track one directional and it means that it works better driving forward than it does driving in reverse. Since turning means you are driving one track in reverse, this also means that V shaped profiles are not as good at turning.